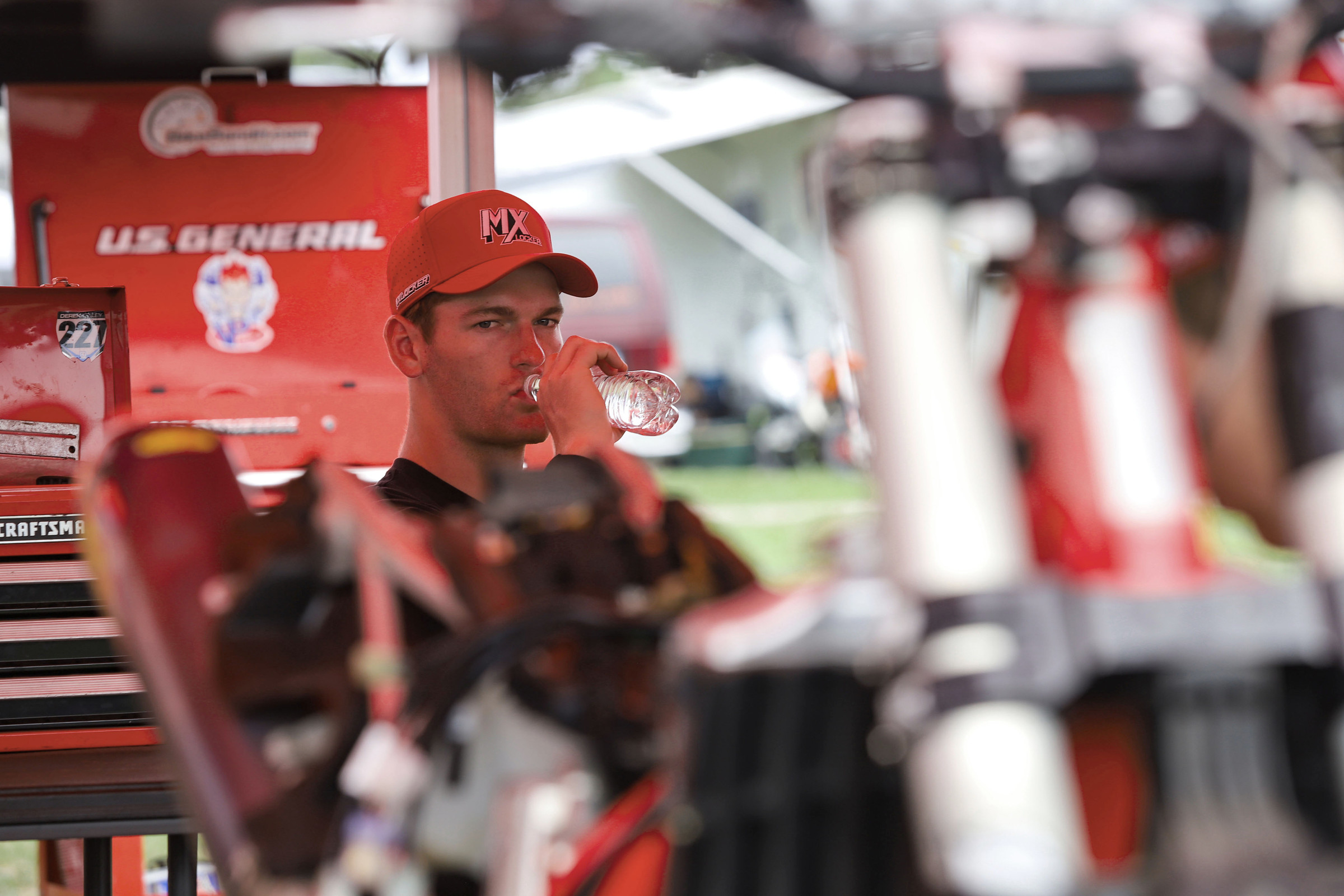 If you’ve been a regular visitor here at Racer X Online lately you’ve noticed we’ve been running more pieces from one of our contributors, Jamie Guida, or as he’s better known, Darkside. He hosts the MotoXPod Show (look for it wherever you search for pods). For us here at Racer X, Darkside has been digging in deep with privateers in the sport. This week is no different, as he had a chat with Derek Kelley to see about Kelley’s plans for 2022, his path to the pros, and what privateer life is like.

Darkside: What's up, DK? I've known you for a while but for those who don't, where did you grow up and what was your introduction to dirt bikes?
Derek Kelley: I grew up in Boise, Idaho. I grew up trail riding. My dad, Darby, was into that stuff. He did ISDE qualifiers and enduro and trail riding stuff. He got me a bike when I was young, and I got into that. Then I did a little bit of desert riding. Eventually I got introduced to some guys that rode track and it went on from there.

Did you race any off-road competitions?
Yeah! I did a few of those. It wasn't that exciting or challenging for me. The competition wasn't enough. It felt like trail riding by myself.

You mentioned being introduced to motocross by someone. What was that first experience like? Was it what you'd been looking for?
I was actually kind of scared. My dad and I were not used to doing jumps. We were learning together. We picked it up pretty quick. I think I was about six the first time I went to a track and I raced my first national within a year.

How well did your dad pick up on it?
He was a good rider. Once I started racing full time, he dropped everything he was doing, and he was into helping me. He was my biggest supporter. He took it really serious when I was young. I wouldn't have been able to make it as far as I have without him.

During those 65 and 85cc years, were you taking it serious? Was a pro career in your thoughts?
I was a late starter for the amateur circuit. At seven or eight I started doing some nationals. I took it serious from there. I was planning on going as far as I could from a young age. Obviously, you never know for sure how far you can go.

Once you started going to Loretta's, what were some of your best experiences?
It's not something I really look back on with enjoyment. It was a lot of rough times. I never rode to my potential, and I had a lot of bike problems. One of my best rides was my last moto there. I ended up fourth in moto three of the 250 Limited B Class. It was a lot of pressure and underperforming. I had more pressure on me at Loretta's than pro racing. The cost is immense, and all the travel from the West Coast is crazy.

You went pro in 2019. How was that first experience lining up for supercross?
It was different. It didn't underwhelm, but it wasn't like “Oh my gosh,” either. I was trying to stay mellow and not get overwhelmed. It was Denver. “I never thought I'd be here, but let’s just go race.” Once the gate dropped it was just trying to survive. [Note: It ended up snowing during his first supercross race.]

You mentioned staying mellow. You seem like a mellow guy in general. Is that just your personality?
Yeah, my dad always checks my pulse because I don't get too excited. Everyone thinks I'm dead inside. I just contain my energy.

So no “in awe” of the “superstars” you are racing?
No. There's no reason to be afraid of them.

When you raced that first supercross in 2019, was it full privateer? Did you have any help?
No, I was actually racing off-road at the time on a Honda. And then raced a Yamaha 250 I’d raced Loretta's on a couple years prior. I had no help other than my dad.

How did you get the proper suspension? Did you even know what you needed?
I had a buddy that raced Arenacross in 2018. I bought his leftover KYB A-kit suspension. I had no idea about settings. I did four days on Milestone's supercross track. I did that and raced off-road the weekend before.

For 2020, you rode on the JMC Motorsports team. How did that come about?
We talked to them at Denver. I qualified pretty well and was battling with one of their riders. So they saw me and then we talked a little. They actually just took a shot with me and picked me up for the year. They really helped me. I didn't have a lot of results, but they saw potential. It's so much better than being out of your own vehicle.

Did you have your own mechanic?
My dad wrenched for me in off-road and my first supercross. I have some pictures of him walking the track with me. Some cool memories. He's not the greatest with a pit board, though. I was in ninth place in my heat, and he told me I was in tenth. So, I was pushing to pass the guy in front of me and clipped a Tuff Block. I would have made my first main event. It was a memory. At JMC my buddy wrenched for me until I broke my leg at press day at A2. The rest of the season was postponed due to COVID[-19].

You raced some outdoors that year with TPJ Racing. How was that?
It started out rough. I told you I have some emotional damage from Loretta's. Having two rounds of mud there was not a fabulous start to my outdoor series. I wasn't too happy with that. It was cool towards the end when I started picking it up and getting some points.

For 2021 you made a change to AJE Motorsports. Talk about that.
It was a little better deal. I'm not super stoked on three teams in three years. Sometimes it's not in a team’s budget to pay you more or help with more things. It was a better deal overall going with AJE. I came into the year expecting to pick up where I left off, or even better. I came into Orlando and crashed out of the heat and the LCQ. I didn't qualify well either. My confidence was in the toilet.

Did it get better for you?
A couple days before Daytona I was riding some outdoors and popped a tire while in fifth gear. It pitched me off and I tweaked my neck. I was fighting through that for the next six rounds. I was just limping through the entire year. Thankfully I started making a couple mains. Finally in Atlanta I got an 11th. It was a struggle.

It's a tough sport. We're a week away from A1 in 2022. Tell me what you've got going for this new season. You've moved to AEO Powersports KTM.
The main thing with this team is they have access to a lot of good parts and knowledge. I was with the same suspension guys last year, but I get a different treatment being on AEO. That's a big help. The team has a good relationship with KTM. We won't have the same resources as a factory team. We probably won't have a LITPro. Those things are an advantage. But, I'm going to have a really good bike. The team owner, Jeremy Schism, is a really solid guy. The team vibe is great. He's all about the under promise and over deliver. A lot of times people say they can give you things they can't. He'll tell you, “I'm not gonna be able to do something,” and then come back with twice as much as asked for.

What are your expectations for 2022?
The main thing is I want to perform at my ability. I don't want to put a number on it. I want to go into the year strong and put in the results. I want to be more consistent.

Last thing, tell me about the company you're involved in, TruFusion Sports.
TruFusion Sports was started by Craig Canoy. He's raced professionally. He runs triathlons and does some Ironmans. He wanted a pain cream that wasn't a CBD cream. I got introduced to him and he gave me some product. He gave me some that helped with arm pump. I was like, “Yeah, whatever! We've all heard that.” I ended up practicing with it and it worked. I got through a 30-minute moto without getting arm pump. I thought, “Interesting.” I've dealt with arm pump my whole life. We got to talking and he needed a partner. We ended up investing and buying in as 50 percent partners. The products are really good. I think we could help a lot of people. Our stuff is pain relief and recovery related.

Anyone in particular you'd like to thank?
Obviously my mom and dad, Darby and Michelle, and my girlfriend, Kayley, my trainer, Evan Nystrom, and my mental coach, Kevin Keyes, at Moti Coaching.