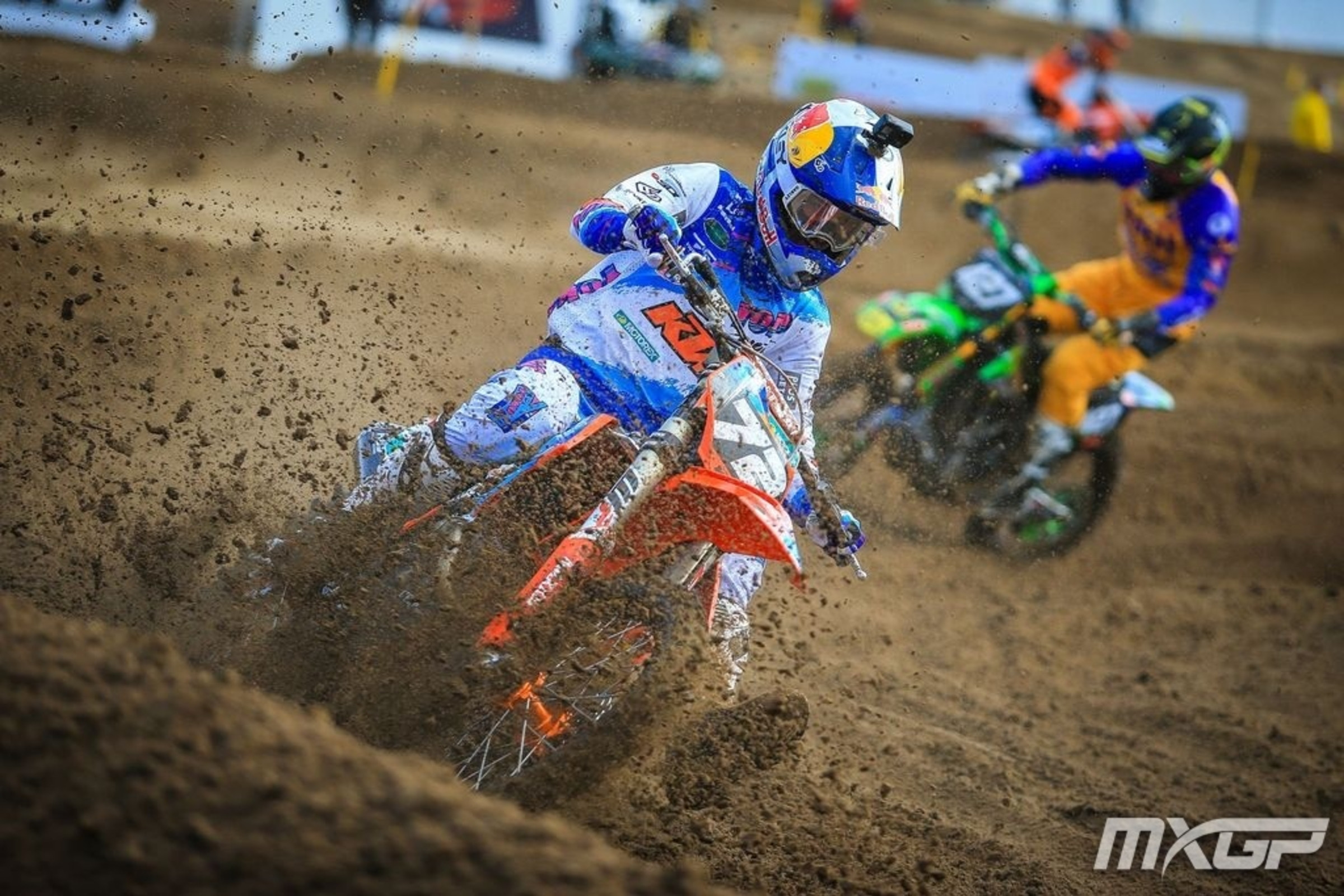 Seems hard to believe that Liam Everts, son of 10-Time World Champion Stefan Everts, and grandson of World Champion Harry Everts, could quietly make his Grand Prix debut, but that’s what happened over the weekend. Liam, who is running fourth in the EMX250 development series, jumped into his MX2 debut at the last GP in Sardegna. He took 13th overall. Next up? Liam will actually represent Team Belgium at the FIM Monster Energy Motocross of Nations this weekend!

Liam Everts, big day, this was the first MX2 race of your career. I thought it was actually really good. Timed qualifying was a little rough but I feel like that’s the hardest part for riders jumping into MX2. Once you got into the races I thought you were good.
Liam Everts: Yeah qualifying has always been a bit of a working point for me. Yeah, here they have no mercy, they just go all out. I think it was a great experience to learn from that. The first race was okay, I didn’t have a good rhythm there and not a godo jump off the gate, made it hard on myself. I got 15th or 16th, I don’t really know. The second race I got a good jump off the gate and managed to go a little bit more to the inside. I finished 11th and I kept up Conrad there for a long time, but I had to let him go which was a shame because I think I could have gotten [Bastian] Boegh Damm at the end, which would have been P10. So in the end, 13th overall.

How was your fitness? Obviously much more intensity there, where you just hanging on at the end or did you feel pretty good?
[Laughs] I think everyone was hanging on there at the end! Including myself! Yeah it’s just such a hard sand track. Racing with these factory bikes and all these guys around, it’s world class. Fitness I think I’m lacking a bit, just my body, because I think my cardio is good. This is normal, I can’t force that. I think I just have to be patient and I’ll be better next year.

What expectations did you have? Did you think this is right around where you would be?
I think top 10, maybe 15 would be possible. I had a little bit of a target of where I could be. There was no pressure from my side. The first moto I put a bit of pressure on myself but in the second moto I just went all out and I was quite alright.

Maybe that’s an advantage to what you’re doing next year. MX2 will be your main  thing, and you’ll know what it’s like.
Yeah exactly. This was my first GP and you’ll never forget that moment, but I did pick maybe the hardest of the season! But yeah, with that, it makes it even better for the learning experience.

[Check out this interview with Liam and father Stefan.]

You mentioned racing factory bikes. You do have a KTM deal, you get support, but what does that mean on the bike side at the moment?
At the moment we run our own team, but we get engine support from Austria. Not the factory bike, I think we get the one from 2017, I think that’s the right one. It’s a great engine. I can’t complain about it.

Speaking of MX2, sounds like you won’t be doing your own thing. Do you have anything sorted yet? Someone told me yesterday you’ve got your plan figured out.
There will be news to share in the coming weeks. I don’t have any news to share, but it has been confirmed on my side.

Are you happy with it?
I’m very happy where I will be next year and the support I will get. It’s a great team and great atmosphere to learn.

Heading into the ‘Nations this weekend, you could be excited, you could be nervous. How do you feel going into that one?
I’m very happy that I can ride, first of all. But on the other side I’m a bit disappointed by other riders from Belgium, like Jago [Geerts] and some other guys, why they don’t ride. It’s none of my business, in a way, but I do feel like it’s the biggest event, in a way, okay the Americans and the Australians are not coming but to represent your country, and how it’s going in Belgium with motocross, I think some guys should have put their name in to race.