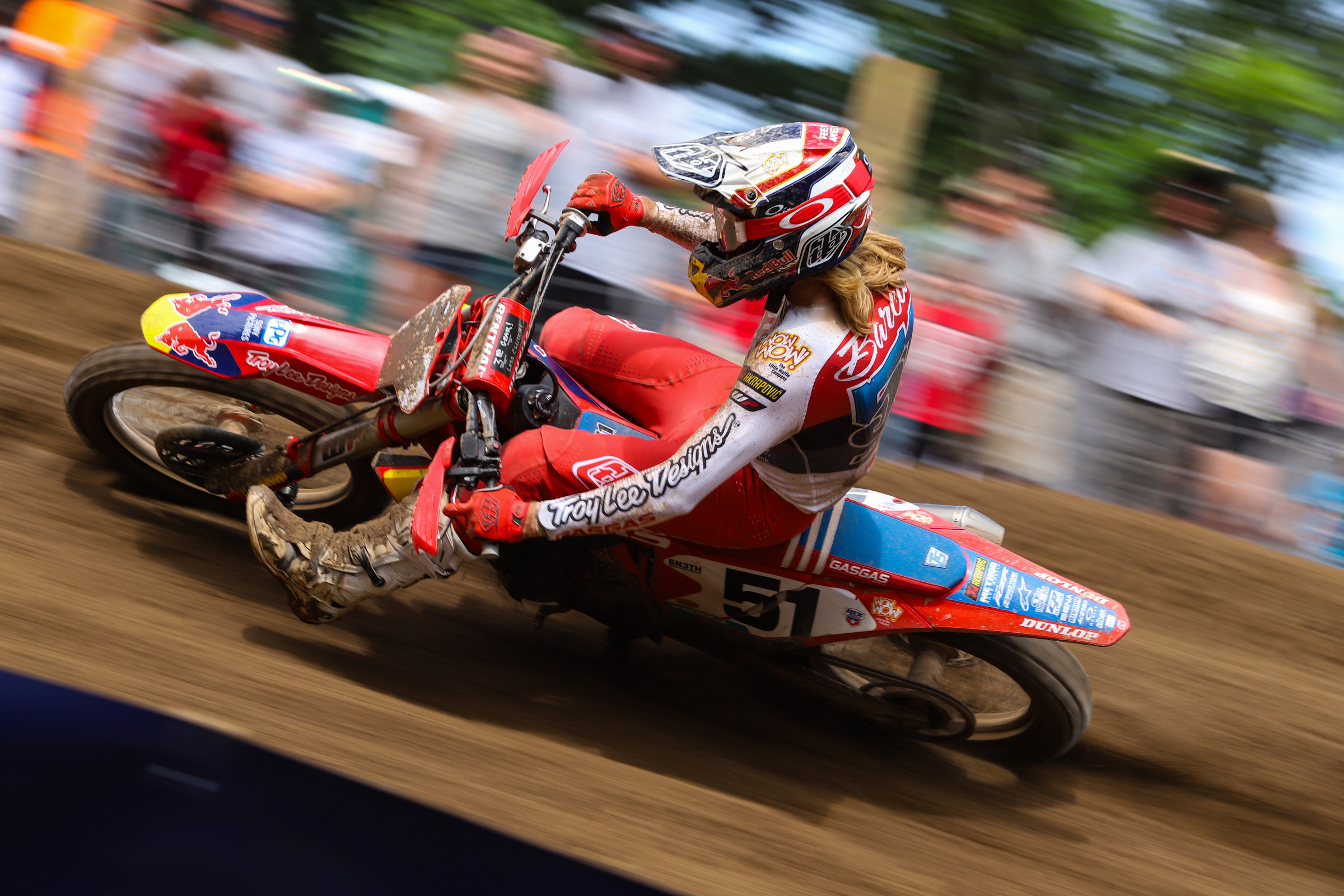 Between Barcia Re-Signs with GasGas

Last night at the Troy Lee Designs/Red Bull/GasGas Factory Racing team intro in California, it was announced that Justin Barcia re-signed with the team. Barcia was picked up by the new team for the 2021 AMA Supercross and Motocross season on what was believed to be a two-year deal, meaning his contract would be up at the conclusion of 2022. However, last night’s 2022 team introduction brought the news that Barcia had re-signed with the team through the 2023 season.

The Spanish motorcycle brand specialized in trials machines but was bought by the KTM Group in 2019 and brought under the KTM Group umbrella that also has Husqvarna under it as well. Several members of the Troy Lee Designs/Red Bull KTM race team moved to the newly formed Troy Lee Designs/Red Bull/GasGas Factory Racing rig as the Red Bull KTM took on Max Vohland as their sole factory KTM rider. Wanting a presence in both the 250 and 450 Classes, GasGas brought in Barcia as its big-name rider capable of race wins, while also bringing over Pierce Brown from the Troy Lee Designs/Red Bull KTM team and Michael Mosiman from the Rockstar Energy Husqvarna team for the 250 Class. The brand debuted a video with a fake 2021 Anaheim 1 Supercross (since the series was starting in Houston) where Barcia took the win, introducing the brand and new team to fans. But then it actually happened: Barcia won the actual season-opening round of Monster Energy AMA Supercross at NRG Stadium in mid-January—his third consecutive win at the first round—in the GasGas brand’s debut on the AMA Supercross and Motocross circuit.

“It was definitely a lot to take in,” he said on the night. “It was an intense race. Me and Kenny [Roczen] checked out and he kept the pressure on me, and I made a few little mistakes. All in all, it was just a really intense race. The off-season training went extremely smooth. The transition to the team went really well. So, I felt really good. Then coming in, you just don’t know where you’re at. I know I can win, but there’s more to that. It was definitely a lot of emotions to take in. We put in a lot of work. It feels really good. I was really, really happy. It’s a lot to take in.”

“I’m really stoked on the result,” he continued. “Winning was great. If I would have got third tonight, that would have been great. If I were to finish top five, it would have been great tonight for me. But to win it was awesome. I was really stoked on my starts. I’ve always been a really good starter, but the past five years it’s been difficult. So tonight, to rip starts on my bike and stuff was cool. I felt really good riding. I felt like I could throw the bike around and kind of do whatever I wanted. It was cool to have Kenny pushing me the whole time. We were definitely going for it. It was a rad first race.”

He finished fourth in the 450SX standings with four total podiums on the season. In the Lucas Oil AMA Pro Motocross Championship debut for the brand, the #51 picked up GasGas’ maiden 450 Class overall podium with a third-place finish at the Southwick National with 2-4 moto finishes. At the following round Spring Creek National, Barcia stood at the center of the podium after 1-2 moto finishes.

“It was a really good day,” Barcia said after the win. “I felt incredible. Just super happy and grateful. It was awesome. I’m a little lost for words still. Just kind of taking it all in. A lot of hard racing. Definitely pushed hard. I can’t thank the whole crew enough, the whole GasGas team. They’ve been awesome. They keep believing in me. It’s been rad. Today was super cool.”

Barcia said the following in the team’s press release announcing the return of all three riders for a second year:

“I’m really stoked for the second year on the team! The first year, we had so much fun and we worked really hard. We got two race wins, which was super awesome, but our goal is always to win the championship and that’s what we’re looking for in 2022. The team has changed a lot this year. I have a new mechanic, Ollie, which I’m stoked on; and we have a few other new guys on the team that are doing an awesome job. The whole GasGas brand is really cool and it makes work a lot easier when you can have a lot of fun with the crew. We definitely have a strong team coming into this year and for me, I have my head down and working hard, having fun and ready to go for that championship!”

Justin Barcia has re-signed with the team through 2023

“This is where I want to end my career,” said Barcia of the contract extension

“I’m stoked to be with the team through 2023. Obviously, the big picture is to be here for the end of my career. We’ll see how long that goes. We really didn’t have to work on [the contract] too much. It was kind of like, they were happy with me and I’m really happy with the team, and it just worked out really easy. TK [Tyler Keefe, team manager], Troy [Lee], and all the guys at KTM like the higher ups were stoked on me and I was obviously stoked on them. So, I’m super grateful to be here and having fun with them.”