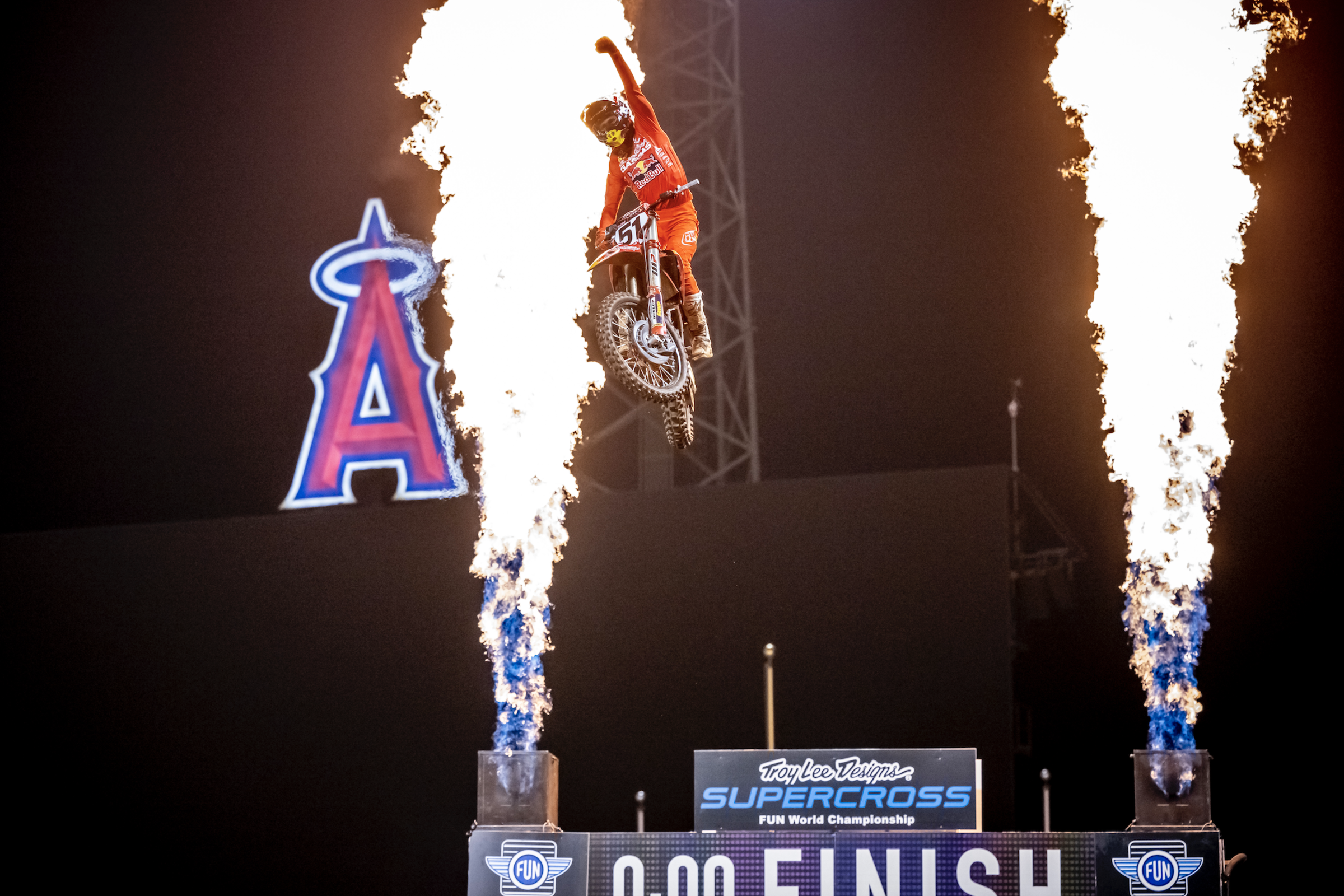 This made absolutely no sense. Social media posts began appearing Saturday morning showing Justin Barcia at Angel Stadium. Then more saying he was fastest in qualifying and had taken a heat race win. At Angel Stadium. #ThreePeatorBust said the hashtag as Barcia appeared ready to win Anaheim 1 for the third-straight year. On Saturday night, January 9, the Troy Lee Designs/Red Bull/GasGas Factory Racing team then premiered a video with Barcia “winning” the race.

However, as you know, this race never happened! There isn’t an Anaheim 1 in 2021! The entire program was a fake, put together by Red Bull, Troy Lee Designs, and GasGas.

The reaction on social media has been mixed. Some thought it was crazy, some fun, some hated it and some figure this was a huge waste of money and will put a target and pressure on Barcia’s back. Either way, it was the prime talking point of the weekend that would have hosted the Monster Energy AMA Supercross season opener if this were a normal year.

How did they do it? Well, the brands actually rented Angel Stadium, then built a fake finish line jump, and had at it. Here’s Justin Barcia himself with an explanation of how it all happened.

Racer X: When did you first hear about it? Were you like, “Whoa,” or were you like, “Sweet!” Were you on the fence?
Justin Barcia: I heard about it a couple days before it happened.

Seriously?
A little bit. Jeremy [Malott, of Red Bull] texted me and said, “Hey, do you have the Anaheim 1 trophy from last year?” I said, “Yeah.” He said, “Okay. Can you send it to me?” I was like, “Yeah. It’s in Florida. I’ll get my parents to send it.” I didn’t hear anything else for like two days. Then TK [Tyler Keefe, TLD team manager] was like, “We rented the stadium and you’ve got to hit a freestyle jump.” I said, “I’ve never hit a freestyle jump in my life.”

That’s hard to believe. You’ve never hit a ramp?
No. Never. So I said, “No, I’m not hitting a ramp. There’s no chance.” Then they explained everything to me and I was like, “Oh, I guess I kind of got to.” They had already pretty much set up the whole thing. So I showed up. It was super chill. There was one guy there that owned the ramp. It was a big ramp and then an airbag landing. So I went and looked at it and I was like, I’m not hitting that. It was like 80-something feet, and all you see is the backside full straight, and you’re landing on an air bag, which I’ve never done. The guy that owns it and jumps it is trying to explain it to me. He’s like, “So, when you land you don’t want to hit the brakes and you don’t want to hit the throttle,” saying all this stuff. I’m like, Oh my goodness. I’m getting more nervous by the second. That’s totally different. So then he’s like, “Just follow me.” So we do a few run-ups. I’m trying to build the confidence to just follow him off the thing. It took four or five goes. Then I launch it behind him and right away I’m like, Oh no. I’m way short. So I was way short. I landed on top. I didn’t know how the airbag was going to feel when I landed, so I tensed up. It pogo-sticked me. I got the worst whiplash ever. But, I didn’t crash.

So you got a whiplash landing on the air bag.
Yeah, on an air landing. I was super tensed up. Didn’t know what it was going to do. So it went like a trampoline. I landed and it kind of went down and then it just pogoed out and I landed halfway down the landing. It was gnarly. After that though, I had it dialed. Hitting the jump, doing one-handers, super stoked. But honestly, the whole experience was typical Red Bull, totally a class act. That’s how they do it. They don’t fool around. They rented the whole stadium! They had the flames! They do it right when they do it. It was quite phenomenal. When you watch it, it looks like the real thing. If you saw it and didn’t know any better you would say we went and raced, a hundred percent. It a hundred percent looks like I won Anaheim 1 three times in a row.

I saw you and Troy [Lee] popping champagne celebrating.
Oh yeah. It’s full super legit. Troy is a legend. He was full in on it. This whole GasGas thing is a fun brand. It’s not a made up, like this is a fun thing for marketing. It really has been fun. We’ve done cool stuff.

You were sketched out, understandably, but you decided to say yes. But there are definitely some riders at your level that would have said no.
You think so?

Absolutely! So what I’m saying here is, you kind of have that DNA in you. You don’t mind doing off-the-wall stuff.
I would think so, but, honestly, I did not want to do it. It wasn’t a good time to do it. It was like four weeks before the first race. I was one hundred percent out of my comfort zone. But I had to grow a set of balls and hit a freestyle jump, which was cool. I wanted to keep hitting it after I hit it, after getting that fear out of my way. It wasn’t like anything I’ve ever done. I’ll hit a triple no problem, but it was just so foreign and so weird. It was strange.

In midair you were cursing this guy and this whole thing?
Yeah. It’s hilarious. If you could hear the outtakes, it was hilarious because I was wearing a mic the whole time. I was like, “I just snapped my neck!” It’s all on mic. It’s actually hilarious now when you go back and watch it. But it did not feel good. I had a sore neck for three weeks after. My neck just got better.

The thing you were worried about…
Yeah. Almost killed me.

I don’t think every rider at your level would do it, so it does speak a little bit. You were sketch, but you said yes.
I couldn’t say no because everyone spent a lot of money to do something really cool. If I would have been like, “No, guys. Sorry. I can’t hit this jump.”

Maybe that was their strategy. Don’t ask, just do.
For sure. That’s why they didn’t tell me anything. Just show up and you’ve got to hit this jump. When I walked down the tunnel and I was looking at this thing, it was up against the wall. We had to stay off the grass so the landing was decently long, but right as you got off the landing the wall was there. It was honestly pretty sketchy. There was nothing safe about it. But it was pretty awesome when we got it done.