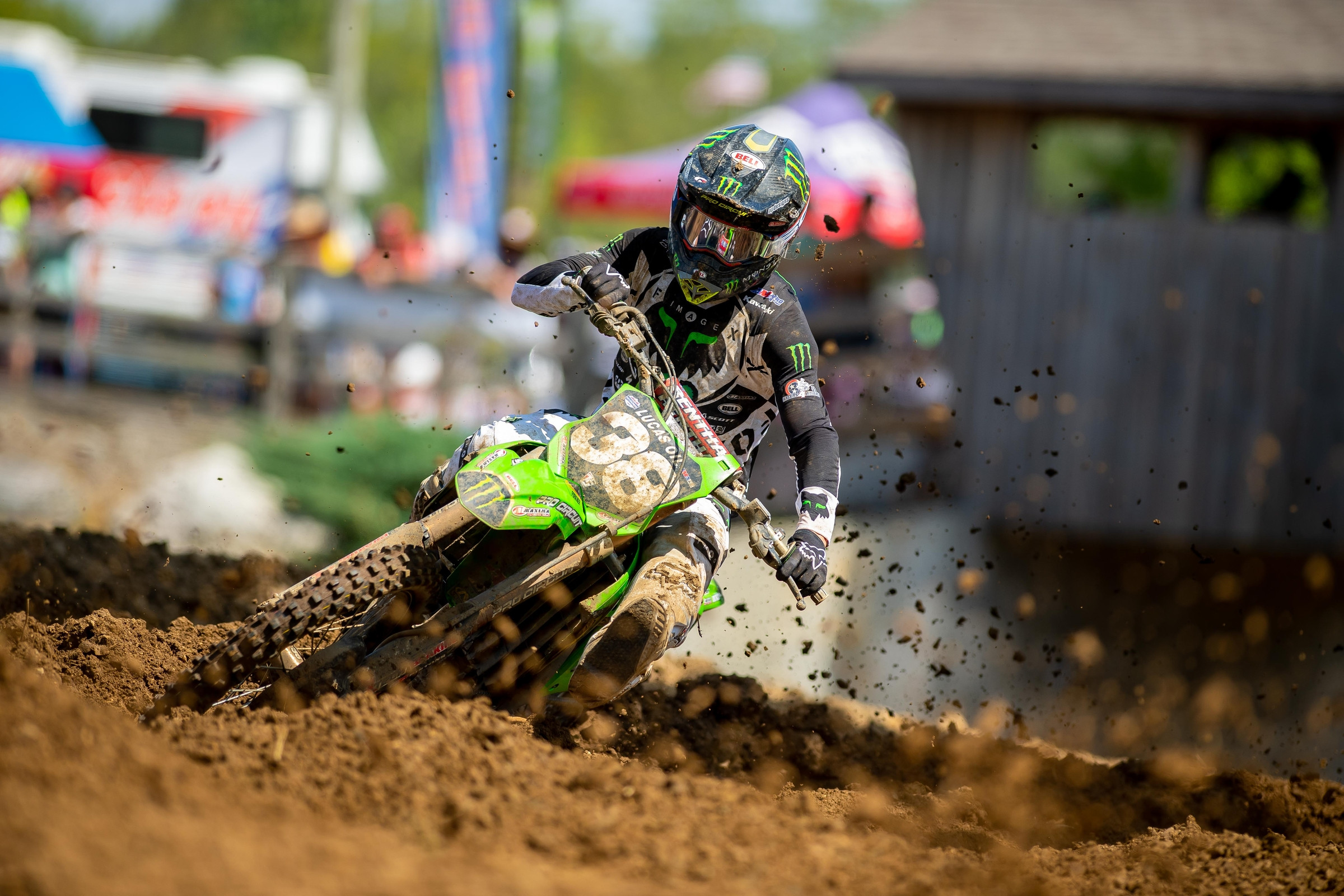 It’s the end of Thanksgiving week and if you’re a motocross racer or moto enthusiast, that means the annual THOR Mini Olympics at Gatorback Cycle Park down in Gainesville, Florida. Far and away one of the most prestigious and established amateur motocross events in the world, it’s exactly where current Monster Energy/Pro Circuit Kawasaki racer Austin Forkner was racing a Cobra CX65 in the 65 10-11 Modified MX class 11 years ago. Read a Winter Olympics racing report released by the Cobra organization in 2010:

“The 65cc class was highlighted by Cobra’s Austin Forkner (Missouri) who pulled some monster holeshots in the motos he contested on his 2010 CX65. Forkner put everything together in the 65 10-11 Modified MX class, scoring factory Cobra’s first 65cc class podium finish at the Mini Olympics with a third...”

Well over a decade removed from those days, the now 23-year-old Austin Forkner is still looked at as being one of the most talented racers. He’s also one of the most star-crossed and injury riddled. Having missed the 2018 and 2019 Lucas Oil AMA Pro Motocross Championship seasons, as well as being sent to the sidelines three races into the 2021 AMA 250SX East Region AMA Supercross Championship with a list of injuries, it’s been something of a long haul for the Missouri native. But that was then and this is now and the 2022 Monster Energy AMA Supercross season is coming at us quickly. Forkner is healed up and his head is cleared. Forkner has the hammer down as he preps for whatever 250SX team owner Mitch Payton dispatches him to. With a little time on his hands the day after Thanksgiving, Forkner spoke with us about the current reality of his racing surroundings.

Racer X: Okay, Austin, it’s the day after Thanksgiving. Just where are you at and what are you up to today?
Austin Forkner: I’m at my house in Murrieta that I’ve rented for the winter. I’m pretty much here all winter now. I didn’t ride today. Today is my day off. I’ve got a bike ride to do later, so I’m just getting some stuff done and just chilling around the house. I’m just pretty much hanging out right now.

Hey, with the Mini O’s currently going on down in Gainesville, Florida, I searched your name and the Mini O’s and a post appeared centering upon you and the success you had on the Cobra 65cc way back in 2010. Do you remember any of that?
Yeah, I remember racing that back in the day. I remember racing all of those amateur races back in the day. It was fun and it’s crazy to see how many tracks either went away, came back or are now completely gone from whenever I was racing. I look back on my 65cc, 85cc, 50cc days and just how much amateur racing has changed since then.

How cool is it to look back to when you were chasing amateur championships on 65cc minicycles up to the winter of 2021 where you are now racing professionally against the best racers in the world?
Yeah, that is cool. I guess whenever I was on 65s, I wasn’t taking it really, really seriously. I was sponsored on Cobra when I was on 65s. I was starting to take it a little more seriously, but I really didn’t take it that seriously until I got sponsored by Kawasaki. That would have been my second year on 85cc bikes. At that point, my goal was obviously to be a pro and to be kind of where I’m at now. We were racing and I got some sponsors and we got a free bike or two and some discounts on gear and stuff like that and that made racing a little easier for us and that saved some money where we could go to the bigger races. It wasn’t until later when it got more serious. Yeah, it’s kind of crazy to look back on 11 years now. It’s crazy how time goes by.

You’re 23 years old now. There is still quite a bit of time left in your racing career. You’ve won races and contested for championships. To my way of seeing things, if you can keep away from injuries and collect a little bit of good luck along the way, you can totally fight for 250cc and 450cc championship titles. What do you think?
Yeah, and I don’t really think there is really one answer that I can give you where I am like, “This is what I need to do to stop getting hurt.” And that’s what sucks. If there was that answer then I could have multiple championships by now, you know? I mean it can’t be like, “Well, just don’t ever crash!” I sort of dealt with that during this outdoor season. I was trying to figure out just how to ride, but to not get hurt and still go fast enough to get good results. That was all kind of on my mind this past outdoor season, which is not really the right things to be thinking about while you’re racing. I think it kind of showed in my results and why they weren’t very good this outdoor season. Yeah, I still have potential. After this outdoor season I just needed some time off to clear my mind and to come into this next 2022 season more refreshed and more clear minded and thinking about things that I need to be thinking about. I want to be thinking, “Finish the outdoor season. Get through it. Come into the off-season without an injury, which I have for the past couple of years which just makes the pre-season that much tougher.” So, I feel solid on the bike right now. I feel really good. My base and where I am at overall fitness-wise right now will help a lot. The off-season time that I have had to help get my mental state refreshed has gotten me really right for going into this next season. I feel solid and I feel good. I know that I still have it. I know that I’m good no matter how the season went. I mean I only made a couple of supercross races in 2021, but I was a top guy in those races. In the first race at Houston I was coming through the pack and in the second Houston race I was passing for second and ended up going down. Looking back on my outdoor season, it wasn’t very good for me, so I think people kind of count me out or they forgot about me. But I still remember. Yeah, I’m still good and I still know how to ride a dirt bike. And even since I’ve come back from the off-season, my riding coach Robbie Reynard has said to me, “You look really good. You look refreshed. You have intensity and drive.” He could see all that stuff in me that maybe wasn’t there this outdoor season.

Great momentum to gather and carry as the 2022 Monster Energy Supercross season approaches, eh?
Yeah, that’s what’s tough, though. It’s sort of like, “All right, don’t crash and you’ll be there at the end.” But then you’re thinking about not crashing out on the track and then you’re not going fast or you’re not focused on what you need to be focused on while you are racing. I mean not crashing is the last thing you want to be thinking about while you’re riding. There are things like that I’ve just had to kind of figure out and go though and get through with this outdoor season. Mentally and physically, coming into this new season, I feel good and in the right place. I’m thinking about what I need to be thinking about on the bike. I feel like I’m pretty much prepared for about anything. I’ve gone through injuries. I’ve gone though just straight-up not riding good. I’ve blown one or two championships by this point. I’ve ripped my insides apart. I’ve gone through quite a bit of stuff! I’m prepared for whatever! I’m obviously going to try and win races and a championship this season, just like every year. At this point, I’m like, “Alright, I’m prepared for anything – good or bad.”

When Eli Tomac stunned the industry by taking the ride with the Monster Energy/Star Yamaha Racing team for the 2022 season, there was talk of you being shuffled over to the Monster Energy Kawasaki team on a 450. However, and as racing fate would have it, the injuries you suffered this past year kept you out of action to the point where you now have another year of 250cc racing eligibility. I wanted to ask you for your take on all of this.
Yeah, I was kind of wondering the same thing. We were kind of unsure. Kawasaki and me and everybody was a little unsure what was going to happen there for a little bit until they signed Jason [Anderson]. There was a little period there where we were kind of like, “Am I going 450? Am I staying down on the 250?” They got Jason and decided to have me do another year of 250s. We got the contractual stuff that we needed to do complete and it just worked out for me to do another year of 250s. Kawasaki asked me if I was opposed to it and I said, “Honestly, no. Not really. I’m not opposed to it. I definitely would like to improve upon on how this year went. I want to carry more momentum into my first 450 season.” I’d like to end with a good 250 season before I go to 450s. Lately, I’ve just been keeping it positive and pretty light. I’m not really getting overly frustrated or whatever if I’m making little mistakes or if I’m not the fastest guy at the track that day. I’m not just letting it bother me. I’m not stressing myself out about it. Once racing starts up, I’ll have enough stress on me then. Pre-season time is kind of the time to stress your body, but not really your mind. You want to try and keep your mind clear because once racing starts, then you’re going to be going a million miles an hour.

You’ve always struck me as a racer with an attitude that there’s just nothing else to do but go out there and absolutely try and win. In fact, at times, maybe you try too hard to win. Thoughts?
Yeah, I mean I’ve done some dumb things and made some not right decisions in the past that has gotten me hurt or maybe caused me to lose races or championships or whatever, but I just try to learn from those things and try not to let those things happen again. I definitely want to win. I’m just trying to figure out how to use that intensity that I have, but not overuse it. I still want to use that motivation and that intensity and that raw speed and that raw talent that I do have, but use it the right way. These are all the right things for me to be thinking about right now.