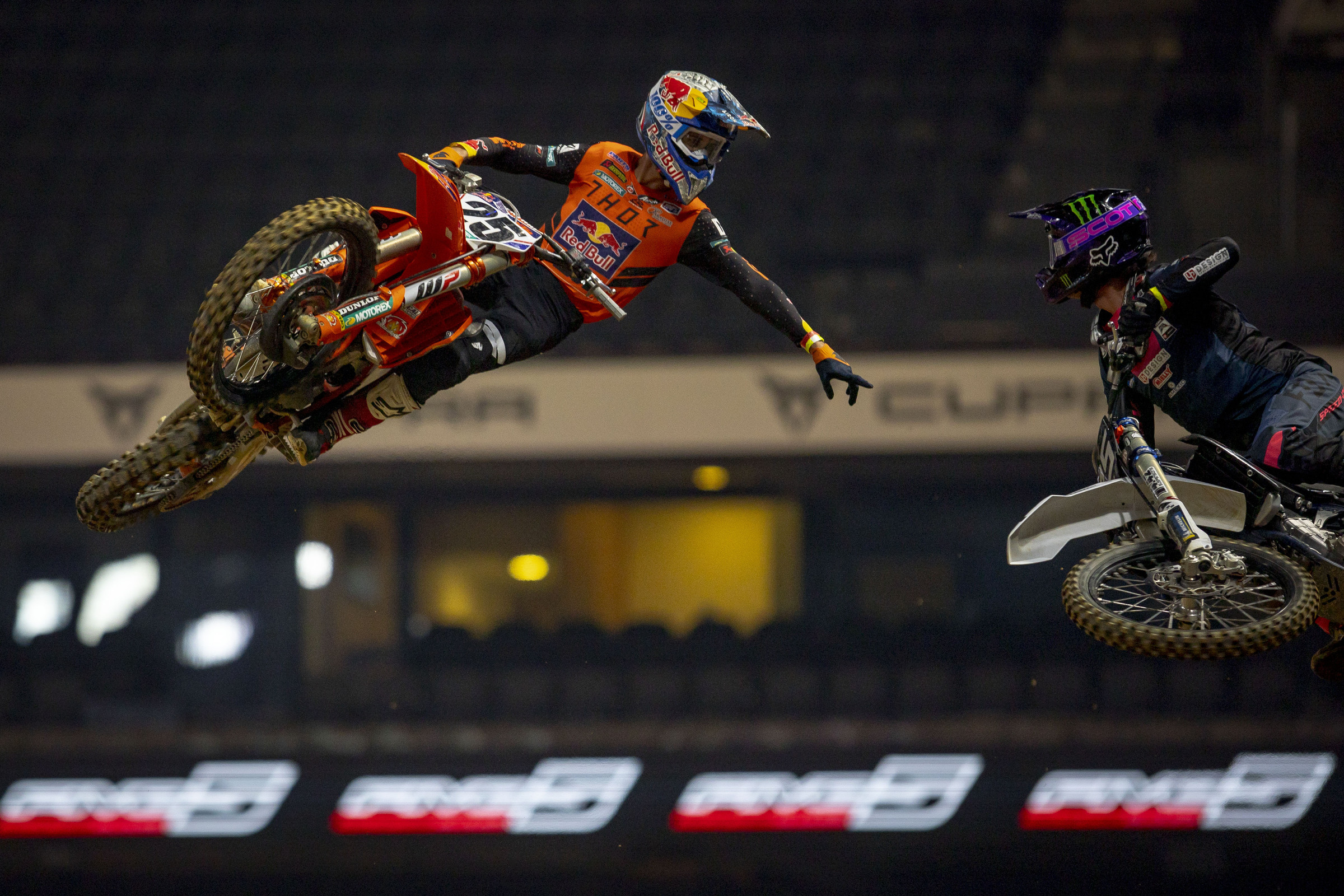 This year’s Paris Supercross actually did happen, which is more than you can say for any of the other traditional off-season supercross races. It took a schedule delay to get there (the race was pushed from October to November) and the usual two or three-day format was cut to one. Also, many of the top American-based racers passed on the event. American-based Frenchman Marvin Musquin, of course, was on board, and he dominated to the tune of 1-1-1 finishes in the three mains. The French really had something to cheer when Cedric Soubeyras outdueled American Justin Brayton for second place, including a wild battle down to the last lap of the last main. This led to a French 1-2, and plenty of hugs and celebrations on the podium.

Steve Matthes talked to the two Frenchmen after the race.

Racer X: Great race, you led every lap and won all three races. You crushed it.
Marvin Musquin: Yeah and that was my goal. I knew if I didn’t get a holeshot it would be tough to pass. It was good practice, it was hard to push. I did make a gap, but to make it bigger was obviously quite tough. When you’re leading you don’t want to go out of your comfort zone, but I was trying to push and make a good practice out of it.

I saw you look down at your bike in one of the mains?
Yeah there were actually a lot of rocks. I felt the tire rolled when I leaned over—it felt soft. I was like 'Really?' I don’t know if anyone got a flat but I knew it was possible to get a flat. So I thought I got a flat. I didn’t, so I was happy.

Was it hard to get used to?
Not really. The feeling is different, obviously, but I know what that bike is like so…

How about Soubs? Soubs was good!
Yeah I’m really happy for him. I know he has been working hard, I know he’s actually been riding beach races! He did a beach race last weekend, so this is pretty amazing, so good for him.

You’ve got the unofficial off-season honor of “flying at the test track.” What’s going on there? Is it working with DV?
Yeah for sure working with DV has been good. It’s been tough but I’ve been enjoying it. It’s different and that’s what I wanted for this year.

Do you feel better?
I feel different because my training is different. DV has been to the track with me a few times, but we still have some time to work before Anaheim.

Racer X: Cedric Soubeyras. Hey good job. Marv just told me you were doing some beach races, so perfect training for supercross!
[Laughs] Yeah actually a week ago I was doing a beach race, my first one. I just had a couple of days, maybe three, practicing supercross, because this year we didn’t have a good series [of French supercross]. But, I had a good season with racing in the U.S. earlier in the year, and some good results, too. It paid off, I think.

Brayton was all over your in the last one!
Oh you know, Brayton is always fighting with me in the past years—Genoa, Bercy—a long time.

You’ve been battling for like 10 years now!
[Laughs] Yeah! We’re just fighting. Today we were fighting in a couple of corners, but there was no whoops, and we know Brayton is whoops! I had to keep my focus, keep my pace, and he wasn’t able to really attack me until the last lap. I made a mistake, but it was good. Good to finish second.

Probably your best Bercy/Lille/Paris ever?
Yes, my best Paris ever, for sure, and maybe the best race I ever did.

Really?
Yeah. Being in Bercy [Paris] has always been a dream. Age 14-15, me and Marvin, we would spend holidays together, and we’d be thinking and dreaming about this, watching supercross at Bercy.

Guys like DV!
Yes! Watching DV, JMB…we’d be like 'Oh, can you imagine that! Being on the podium there?' So we remembered that! We talked about this when we were 14! Right now it’s just a dream!