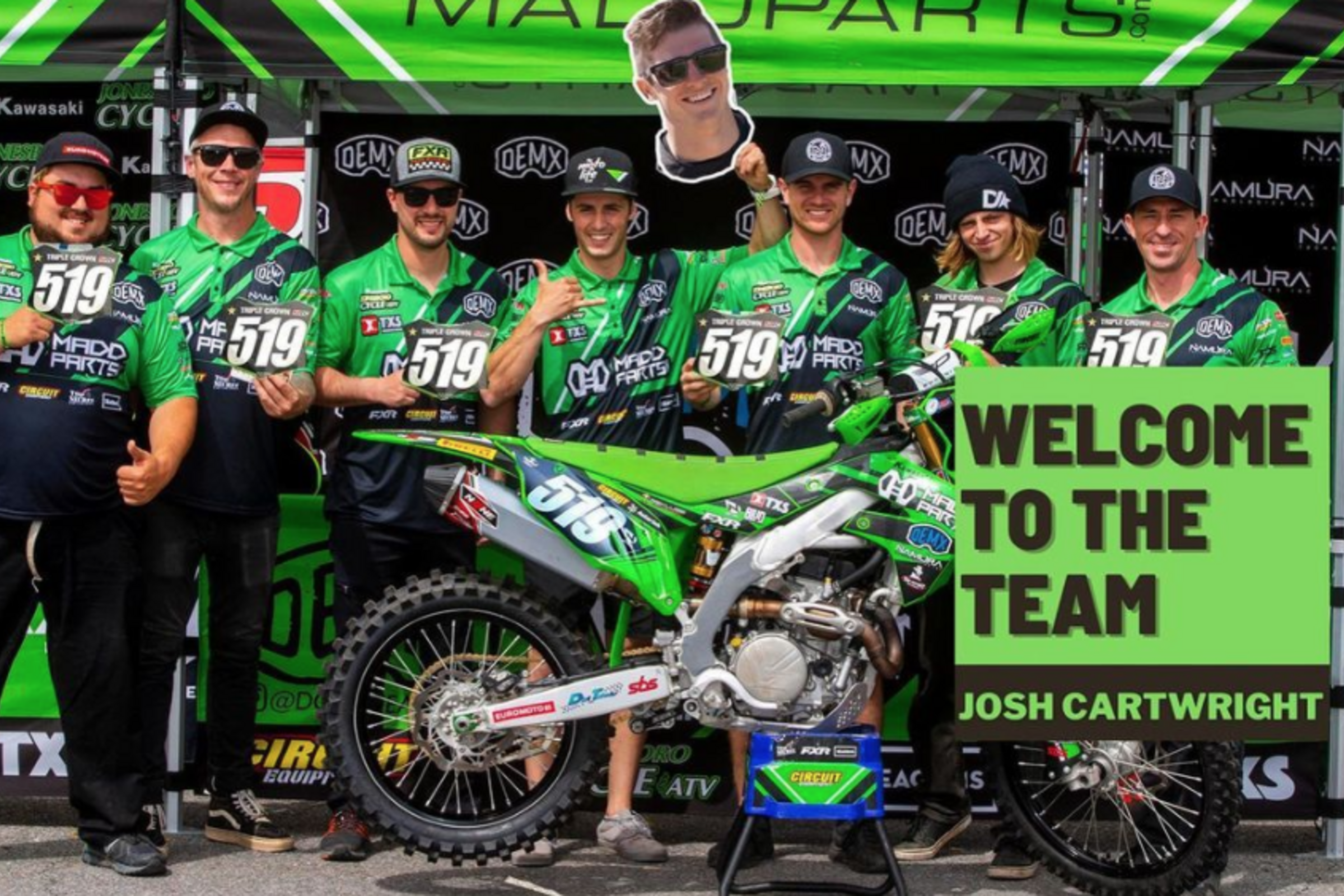 Josh Cartwright has landed a home for the 2022 Monster Energy AMA Supercross Championship. The Florida native graduated from Florida State University in December 2018 then put all of his chips into focusing on racing full-time. He raced the 2019 250SX East Region, finishing 20th in points, with a season-best 14th at the Detroit Supercross.

In 2020, Cartwright signed with the PR-MX Kawasaki team, as he made the jump to the 450SX Class. The jump wasn’t easy, but he managed to get into the Oakland Supercross 450SX main event in his fifth attempt. Unfortunately, it was the only main event he made that year, although he came close a few times—most notably crashing out of the Glendale Supercross Triple Crown LCQ while in a transfer spot. In his second year on the team in 2021, Cartwright was set to race the premier class again but suffered a fractured ankle in December, causing him to spend a majority of the season on the sidelines. When he returned to the championship, he made one main event, the Salt Lake City 1 Supercross—which was celebrated with a huge fist pump across the finish line once qualifying.

The team posted the following on its Instagram page:

TEAM ANNOUNCEMENT‼️
We are beyond excited to announce the signing of @jcartwright519!
“The 2022 season will mark Cartwright's sixth season as a professional. He's an extremely talented young rider and is no stranger to main events and regularly landing inside the top 15. He also has earned several two-digit numbers over the past few seasons. Cartwright was prepared to jump into the 450 class in '21, but a preseason setback sidelined him for the first half of the season. He hit the final few rounds while still actively recovering and was able to qualify for the 450SX main in SLC and earn enough points to finish 39th in the championship. Just behind his new teammate @joancros48. 💪🏻

Josh expressed to us that his best years are to come and we're excited to help him achieve new heights while he helps us continue to build our brand and team. As you can see above, the team is super pumped!!! Look at that Josh Cartwright FATHEAD 😂 Help us welcome Josh to the team! ”

In the 2021 Monster Energy AMA Supercross Championship, the team competed with Bubba Pauli and Joan Cros in the 450SX Class and Logan Karnow (250SX East Region). Pauli did not make a main event, but Cros competed in two main events. Cros (450SX) is expected to return to the team along with Pauli (450SX) and Cartwright (250SX). Karnow finished a career-best seventh at the Salt Lake City 1 Supercross, his third and final top-ten finish of the season. The Ohio native’s best season to date earned him tenth in the 250SX East Region with 80 points, but he announced this week that he would not be returning to the team for 2022.

The @intl.sxraceteam and myself have agreed to mutually part ways for 2022. The 2021 season was more than I could have ever asked for both with my riding and how professional the team was ran. This team aloud me to put in my best results of my career finish 10th in points.

I contacted the team this past week with a new opportunity and unfortunately they were unable to match it. Our preseason agreements allow us the opportunity to consider offers that may come forward prior to the start of the season. Again thank you guys again for everything. Hopefully we all kill it in 2022. Love you boyssss"