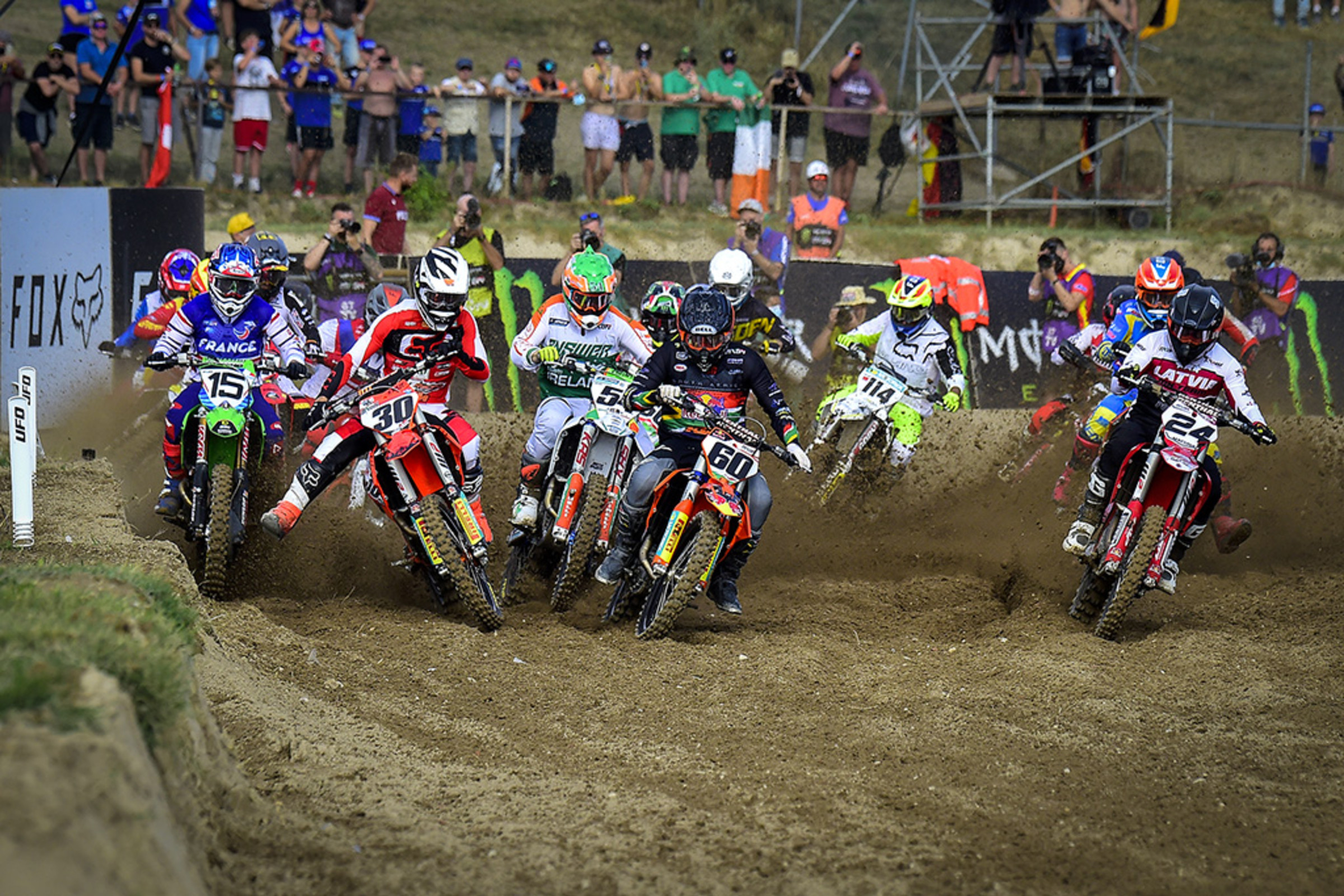 Mantova, Italy – The 74th edition of the Monster Energy FIM Motocross of Nations saw the qualifying heats today as 31 nations took to the circuit here in Mantova, Italy.

The qualifying heats today decided which 19 teams will progress into MXoN races and which will have to battle it out in the B final tomorrow morning. While more importantly for the teams chasing the Chamberlain Trophy this year, the sessions today decided the gate pick for tomorrow’s main races.

The start will be vital here in Mantova and defending champions, Team Netherlands will have the advantage tomorrow of lining up first as between all three riders the team scored four points, while Team France will line up second with five and home heroes Team Italy on five points also in third.

While it was Team Netherlands who qualified best as a nation, the qualification race wins went to Antonio Cairoli (MXGP), Tom Vialle (MX2) and Jeffrey Herlings (Open).

MXGP was the first qualifying session to take place. As the gate dropped, it was Team Great Britain’s Ben Watson who got out in front from the beginning as he led Team Latvia’s Karlis Sabulis, Benoit Paturel of Team France and David Goosen of the Republic of South Africa.

Antonio Cairoli of Team Italy and Glenn Coldenhoff of Team Netherlands started further down the field in sixth and seventh position. Though Coldenhoff was able to find his way around the Italian to steal his position.

Watson then continued to lead as he stretched out the gap to 5.304 seconds over Sabulis and Paturel, as Dylan Wright from Team Canada found himself in fourth place.

Goosen then dropped down to eighth place as Coldenhoff got Wright for fourth place. The Dutchman then had Sabulis and Paturel right in front of him, as he was able to pass Latvia’s Sabulis for third. Cairoli did the same as he followed the Yamaha rider.

After biting his time, Cairoli took third from Coldenhoff and then set his sights on Paturel for second. Not long after he was able to find a way past which sent the Italian crowd wild.

With four minutes plus two laps to go, Watson was 8.117 seconds in front, but that gap quickly came down as Cairoli put on a charge for the win.

With just three laps to go, Cairoli closed in on Watson to take first place from the Brit and go on to win the MXGP qualifying heat. Watson finished second ahead of Coldenhoff who was third.

Antonio Cairoli: “We want to be on the podium, that’s the goal, I was not feeling so well but it’s enough to ride good. I hope to have a better feeling tomorrow, I think tomorrow will be a difficult race, especially the second heat. I feel a little bit stiff now, even today in the qualifying race the pain was there. This race is important but also the world championship is still important for me and I was really happy that I could race here. This comeback was difficult but it was necessary, so I’m really looking forward to tomorrow’s races”.

In the MX2 qualifying race, it was Team Estonia’s Jorgen-Mathias Talviku who led the rest of the field with Team France’s Tom Vialle, Team Austria’s Rene Hofer and Camden Mc Lellan of Team Republic of South Africa just behind.

Team Netherland’s Roan Van De Moosdijk was dealt a blow as he went down in the first corner and had to fight back through the pack. As Vialle wasted no time to pass Talviku for first position, while Team Italy’s Mattia Guadagnini was looking to fight back from 17th place.

The battle for third intensified as Talviku was looking to defend his spot from Mc Lellan, Team Great Britain’s Conrad Mewse and Team Sweden’s Isak Gifting. And it was Mewse the first of the riders to make a pass as he got himself into third after passing both Talviku and Mc Lellan.

Mewse then continued to surprise us lap after lap, as he consistently set the fastest times of the race. Though it was Vialle who was leading the way and was 5.404 seconds ahead of Hofer. But as Mewse made his way around the circuit here in Mantova at great speed his gap to the leaders started to shrink as he got onto the back of Hofer and started to fight for second position.

But also charging through the field was Guadagnini who made some vital passes in the final laps to get up to fourth place, behind Mewse who couldn’t get around Hofer, as Vialle took the win.

Tom Vialle: “I’m feeling pretty good, I have a good felling in the warm-up on the track, this morning was little bit sketchy, so I didn’t get so many risks before the qualification race. Then I had a great start and I was leading, so I was pretty good on the bike, everything was smooth, and now we have a second position for tomorrow, which is really nice, we have a great position and now we are very happy”.

The final qualifying race of the day was of the Open category and maybe the most intense as it was the final shot for the teams to get the best result possible and secure a great spot for tomorrow’s races.

As the gate dropped, it was Team Denmark’s Bastian Boegh Damm who took the holeshot ahead of Mathys Boisrameof Team France and South Africa’s Tristan Purdon. Latvia’s Toms Macuks was third, while Team Netherland’s Jeffrey Herlingsstarted down in 19th place.

Purdon then crashed out of third, as Team Great Britain’s Shaun Simpson struggled down in around 30th, eventually managing to get himself back to 20th.

Team Lithuania’s Arminas Jasikonis found himself battling with Team Portugal’s Hugo Basaula, with the Lithuanian coming out on top to take fifth place. Herlings was also making moves as he was up in sixth by lap four.

Boisrame then took over the lead from Boegh Damm, who was coming under pressure from Macuks and Team Germany’s Henry Jacobi. After finishing his way around the Dane, Macuks was putting on a charge for Boisrame as he was making his intentions of going after the win clear.

And just behind the leaders, Jasikonis was up in fourth with Herlings just behind him as the pair caught onto the back of Macuks. The Latvian was able to hold off the pair for a few moments, but they moved through to take third and fourth places.

Further down the field, Team Italy’s Alessandro Lupino was having a strong ride in ninth place and eventually finished eighth.

On lap seven we saw a change for the lead as Jacobi was able to find a way past Boisrame and next to do the same were Jasikonis and Herlings. By the following lap Herlings was able to get past the tall Lithuanian and set his sights on the win.

Jacobi really made Herlings work for it and with just four laps to go we saw another change for the lead, with the Dutchman now in the driving seat.

In the end it was Herlings with the win, Jacobi second and Jasikonis taking third which put Team Lithuania through into the MXoN races for the second time in the nation’s history.

Jeffrey Herlings: “We are first for tomorrow so that is good, way better than expected as we had a tough time starting from 29th position all three of us. The good thing was that our main competition also were on the outside. From my side, I won the qualifying race and with Glenn’s third place we managed four points so overall we are first which is great for us”.