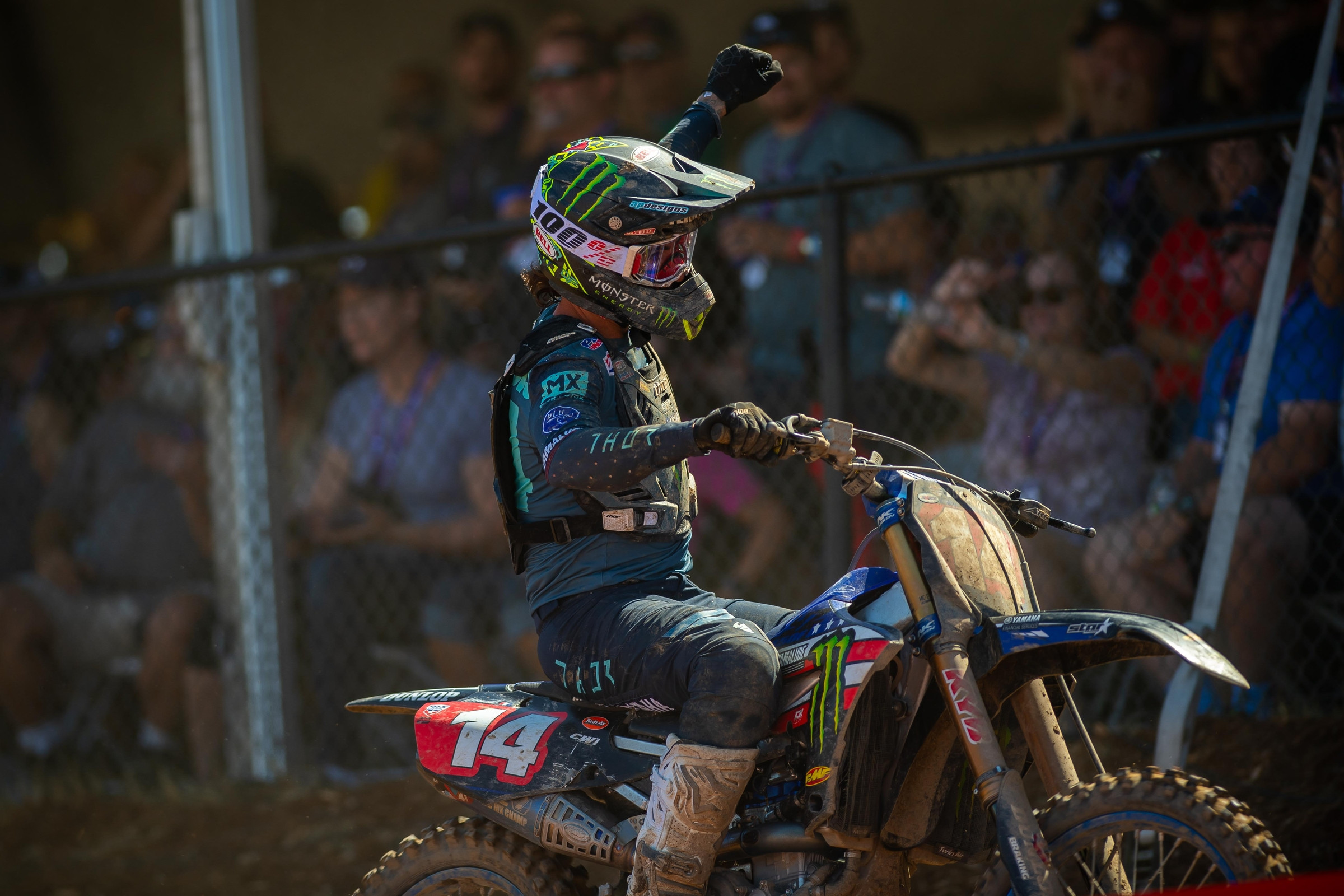 The 2021 Lucas Oil AMA Pro Motocross Championship wrapped up on Saturday at the Hangtown Motocross Classic in Rancho Cordova, California. It also signified the end of a back and forth 250 Class title fight between Justin Cooper and Jett Lawrence that nearly flip-flopped one more time. Lawrence prevailed in the end, but not without some drama. With all of the storylines from the final round still fresh on our minds, we fired off some questions to longtime pro Jason Thomas to get his perspective on it all.

What went wrong in Jett Lawrence’s first crash in the first moto? Riders were talking about the slick track during the motos. Was that slickness part of it?

It was certainly a factor, but I think he was also distracted by the pressure of the pending championship. He likely had 1,000 things going through his mind while also trying to navigate a heavily watered racetrack. That type of mistake is very out of character for him, leading me to think his mind was wandering.

What’s going through Jett’s mind when he gets back up only for another issue to come up as he tangles into the back of another rider. How much panic is going through his head? How difficult is it to calm down and settle in and stop from snowballing to more and more costly mistakes? (An even higher heart rate, mind starts racing, etc.)

It was likely DEFCON 1. His worst nightmare was unfolding in real life during that first lap. Every negative thought he was forcing out of his mind in the days leading up to Hangtown was now reality. The best thing he could do (and did) was to take deep breaths, understand the situation, and start moving forward. He is much, much better than most of the field and it’s a depleted field at that. He simply needed to lean on his lap times and make smart passes. The math would tell him he would get back to the top 10 as long as he just executed for the next 33 minutes. That’s a lot of poise to ask from an 18-year-old but he stood tall.

How big was Jett’s last lap pass on Jarrett Frye in the first moto? Both mentally for the #18 but also in terms of one more position and point heading into the final moto.

I don’t think it really made a difference mentally, but the extra position was critical. The math scenarios for the second moto were changing with every single pass he made. Had Frye tried to make life difficult for Jett, I would buy into the mental aspect a bit more, but it was a pretty straightforward pass.

Were you shocked Jett was able to regroup and pull off the title?

I wasn’t. Knowing how much better he is than the field, he just needed to stay off the ground. He has been Mr. Consistent this summer so I expected him to continue that in the second moto. The great part about being that fast is that he doesn’t have to ride his absolute best to still be near the podium.

I know there are several top riders out right now. But how the hell did Dylan Ferrandis come from about 35th to third in order to claim the overall?!

The most interesting stat here was that even though Ferrandis was working through traffic and did a very slow 2:28 on the last lap, he still averaged the fastest lap times of the moto. His 2:20.229 bested Eli Tomac’s 2:20.437 over the course of 15 laps. That is how you go from 35th to third.

Obviously, he'll be back in 2022, but how awesome was it to see Eli Tomac win his final moto with the Monster Energy Kawasaki team?

I thought it was a fitting end to a great run on green. Regardless of the decision to leave, there is simply no denying how much success Tomac brought Monster Energy Kawasaki. One could argue that he left supercross titles on the table but remember, he won dozens of supercross races for Kawasaki and three Lucas Oil AMA Pro Motocross titles in a row. If anyone in either the Tomac or Monster Kawasaki camp could see the future on the day the initial contract was signed, I am 100 percent certain they would view those last several years as mission accomplished.

With Hangtown being later in the year, a lot of riders talked about how much harder the track surface was. How much different do you feel Hangtown in May versus Hangtown in September really is?

I feel it was a significant change. In May, Rancho Cordova is still in a very mild climate as spring turns to summer. The area hasn’t been scorched daily by 90+ degree temperatures. It also has gotten sporadic rain, helping to facilitate softer dirt.

By September, that moisture has been radiated into oblivion. Relentless summer leaves dust in its wake. Further, the water shortage in northern California surely put a tight leash on pre-race watering. Without the ability to “flood” the track leading up to the event, the surface was hard and slippery. The Dirt Diggers were likely unable to get moisture into the lower layers of dirt which would provide softer conditions.

Have you ever seen a weirder sequence of first turn crashing than the second 450 moto at Hangtown? There were three or four separate “incidents.”

I was mesmerized by Fredrik Noren’s crash. He was pinballing from one competitor to another. If I didn’t know better, I would have thought him a human torpedo. He might have been the catalyst for several of the incidents you’re referring to. It was wild.

Is there anything we learned from the way this Pro Motocross championship ended this weekend that can help us predict what to expect in 2022? (i.e., Webb/Tomac coming on strong, Roczen’s foot injury, the many illnesses, etc.)

I don’t think so. Lucas Oil Pro Motocross is not only much more taxing than Monster Energy AMA Supercross, it also comes after riders have gone through 17 rounds of SX. Bodies and minds are drained almost at empty by the time September rolls around. I think SX is its own animal. It doesn’t require as much physically, and it also sees riders at their most rested.

The trends we saw at Hangtown will likely be long forgotten when January rolls around. The main question I will be interested to have answered will be on how Dylan Ferrandis performs. We have so much historical data on everyone else to reasonably know what to expect. Ferrandis is the wild card for 2022 SX.