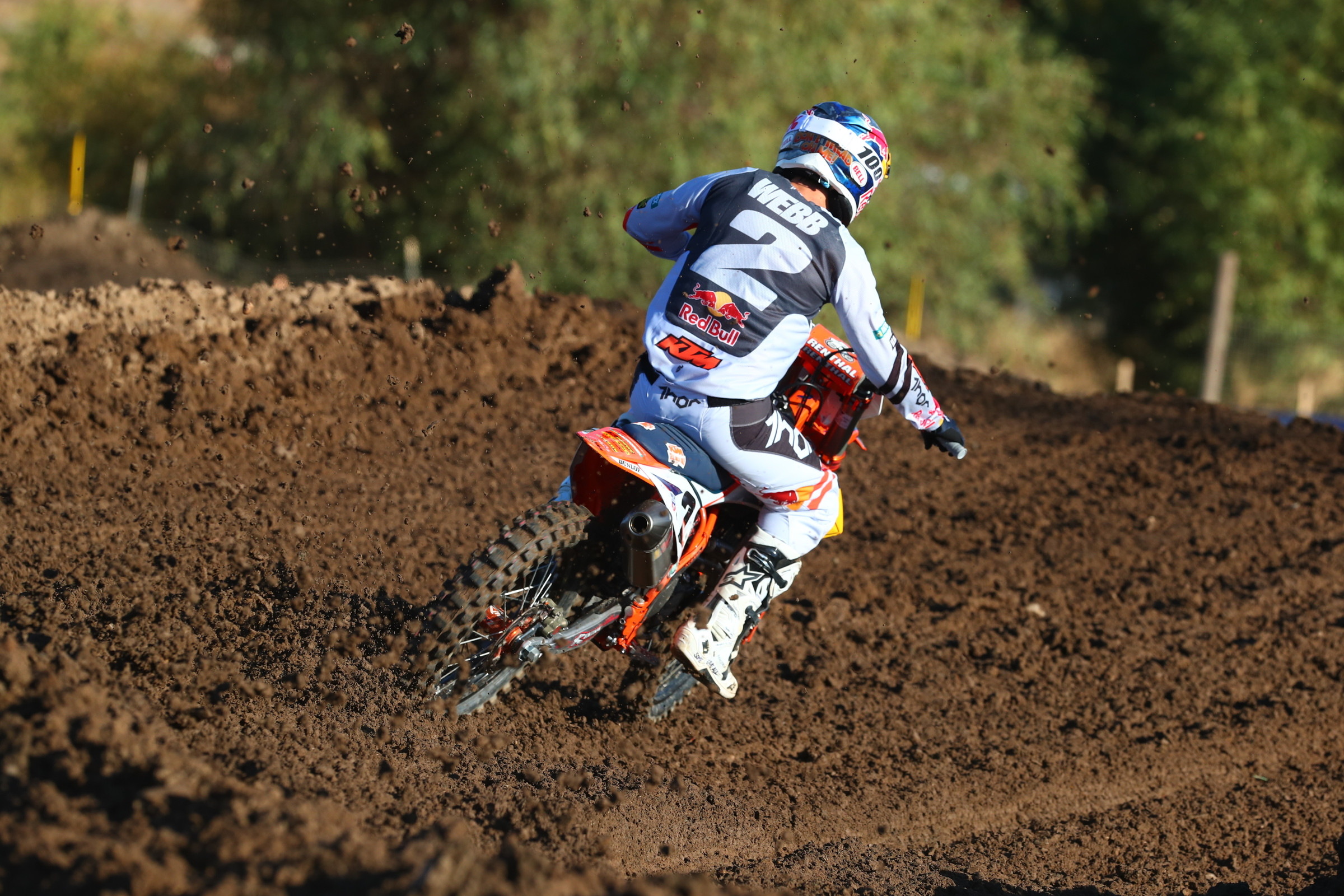 The bikes fired to life and qualifying began as the sun rose over the back side of the Hangtown facility in the early morning. With the temperatures still in the 60s and 70s with the track thoroughly watered, the first few riders tip-toed around to feel out the surface. Within a few minutes, it was clear that it was going to pack up quickly and become a fairly hard and slick surface throughout the day.

The 450B group was the first to go out as the 450 Class will run first today and a notable surprise in the class was Michael Mosiman’s older brother Josh. The former pro turned Motocross Action everyman, Josh Mosiman hasn’t raced a Pro Motocross event since 2018 but he decided to take a stock KTM and give it a go. This race is the Mosiman family’s closest Pro Motocross event to where they grew up a few hours away in Sebastopol, California. Josh fared well in the first session, but the times were coming down as the A riders headed out.

Eli Tomac shot to the top of the leaderboard first in the 450A Qualifying 1 session with a 2:13.196. He was usurped around halfway through the session by Cooper Webb, who put down a 2:12.384. Webb has been a new rider in the last three Nationals of the year after removing a brace on the bottom of his frame initially used for rigidity. He has been knocking on the door of the front runners and his recent qualifying pace has also showed marked improvement.

Webb’s time held on the rest of the session despite the best attempts of Ken Roczen, Tomac again, and Christian Craig, who all landed below the 2:14 mark. So, Webb lands atop qualifying as one session is behind us and one still remains. Notably, newly crowned champion Dylan Ferrandis was not seen in the mix out front in qualifying as he eventually ended up in eighth, over two seconds down of Webb. We’ll see if Ferrandis picks it up throughout the day.

The 250A group was next and Honda HRC’s Hunter Lawrence went right to the top of the sheets almost immediately. He was leading the field around, so he had clear track for his first few hot laps, and it seemed to benefit him greatly to be in fresh air.

Michael Mosiman had a few wild moments as he was pushing the pace. He nearly went off the track after the hip jump table and then crashed on the off-camber after that a couple laps later. Mosiman has been great these last two weeks and was adamant after last week’s Fox Raceway 2 National that he wants to and believes he can win here today at Hangtown. Overall, he would end up seventh in the first session.

Jett Lawrence and Justin Cooper both ended up saving their best for last as Lawrence put down a 2:13.722 on his last hot lap only to be pipped by Cooper’s 2:13.418 just moments later. Cooper was down outside of the top 15 for most of the session until the end so his last lap was huge to show that he’s still feeling comfortable today.

So, Webb and Cooper top the first sessions here at Hangtown. Be sure to tune into Peacock in about 15 minutes for the qualifying show. Check out the full broadcast schedule for today below.