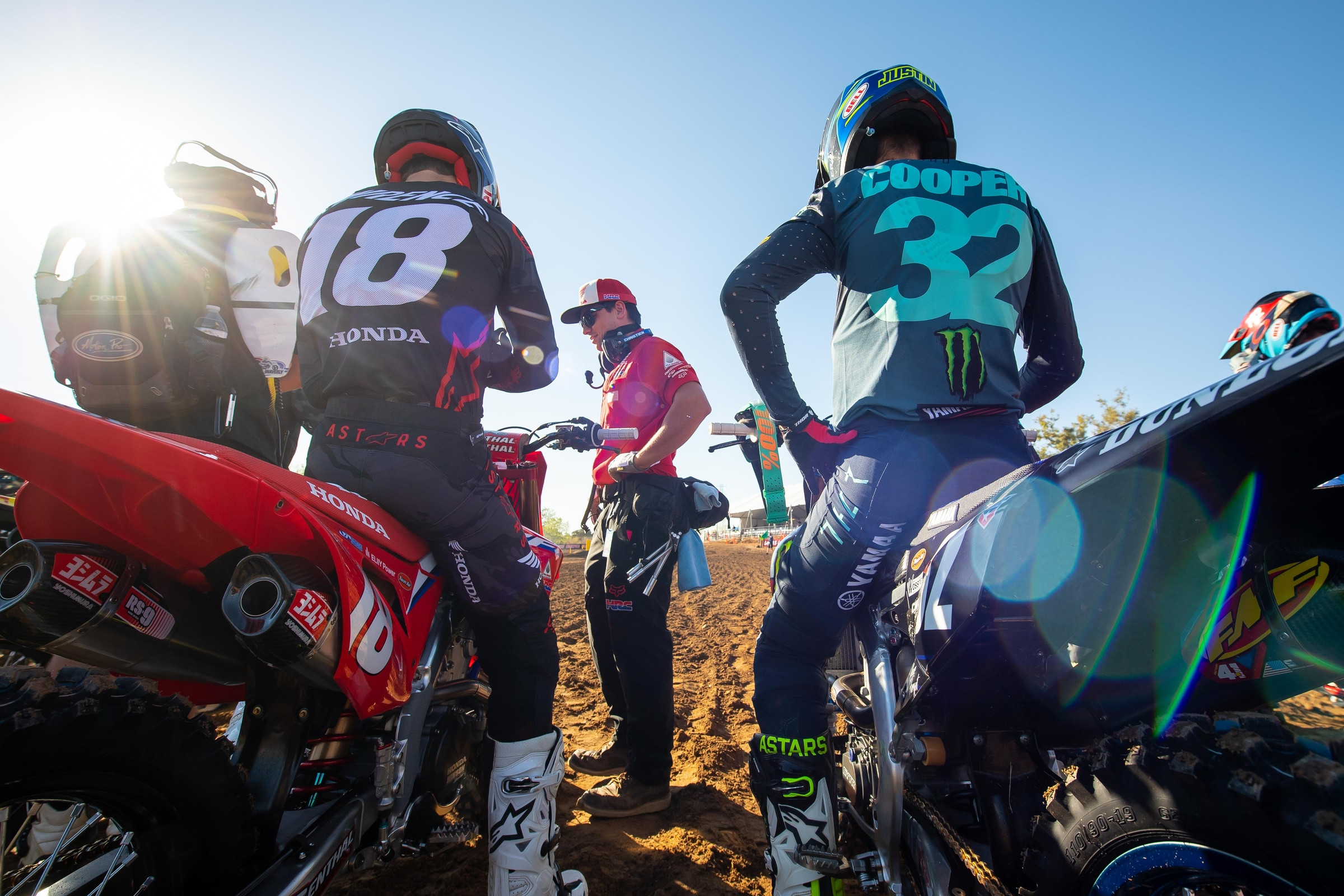 The times were slower in the second qualifying session, which means as far as overall qualifying goes, the second qualifier doesn’t mean a whole lot. That doesn’t mean there isn’t anything to talk about, however. The second sessions begin with practice starts, followed by an actual gate drop, and it was none other than Eli Tomac who shot out of the gate and took off like a fugitive running from a pack of police cruisers. He didn’t let up for several laps, either. Christian Craig stuck on him at first, but ended up going down hard when he swapped in a set of whoops. Fortunately, he was able to get up and rejoin the session.

Ken Roczen started the second qualifier off slowly—his first lap was over three minutes—and spent time cruising and looking around, possibly for some different lines, but when he finally decided to put in a hot lap he looked pretty fast. But just as he was crossing the finish line it appeared as though Dylan Ferrandis inadvertently slowed Roczen a tad. It was so close to the finish line it’s hard to tell whether or not it had an effect on Roczen’s time. In any case, it ended up being the only fast lap he’d complete in this session. And speaking of Ferrandis, he waited a few laps to lay down a scorcher too, but when he did it looked like he’d been blasted out of a cannon. The Monster Energy/Star Yamaha Racing rider looked fantastic, and his time reflected just how fast he was going when he crossed the line with a 2:12.994, which was the fastest lap of the second 450 qualifier. In fact, it was nearly a second faster than Roczen’s 2:13.794! Apparently wrapping up the title last week hasn’t hampered Ferrandis’ motivation to go fast here at Hangtown!

In 250 action it was RJ Hampshire who led the charge, setting the fastest lap of the second qualifier on his fourth lap (2:17.395), but Justin Cooper, who said in an interview afterward he had trouble keeping it on two wheels at first, wasn’t far off with a 2:17.753. At one point Cooper dipped in behind the Lawrence brothers, but nothing came of it. Hunter slowed up after putting in a hot lap and Cooper and Jett never ended up crossing paths. Jett closed this one out third-fastest with a 2:18.335, but just like in the 450 ranks, the first qualifier was faster and Cooper’s 2:13.418 from the first session made you the day’s fastest 250 qualifier.

Local hero Michael Mosiman, who had some sketchy moments in the first qualifier, had another close one when he swapped pretty hard in a high-speed section. He managed to save it but still ended up blowing off the track. He also appeared to have some mechanical issues with his machine, and at one point his team had the seat off. He ended up sixth-fastest in this one, roughly two seconds off Hampshire’s pace.

It’s going to be interesting to see how the track races this afternoon. So far it’s nowhere near how rutted it can get here, and it’s looking like we’re going to have a fast, hard-packed racing surface when the gates start dropping.