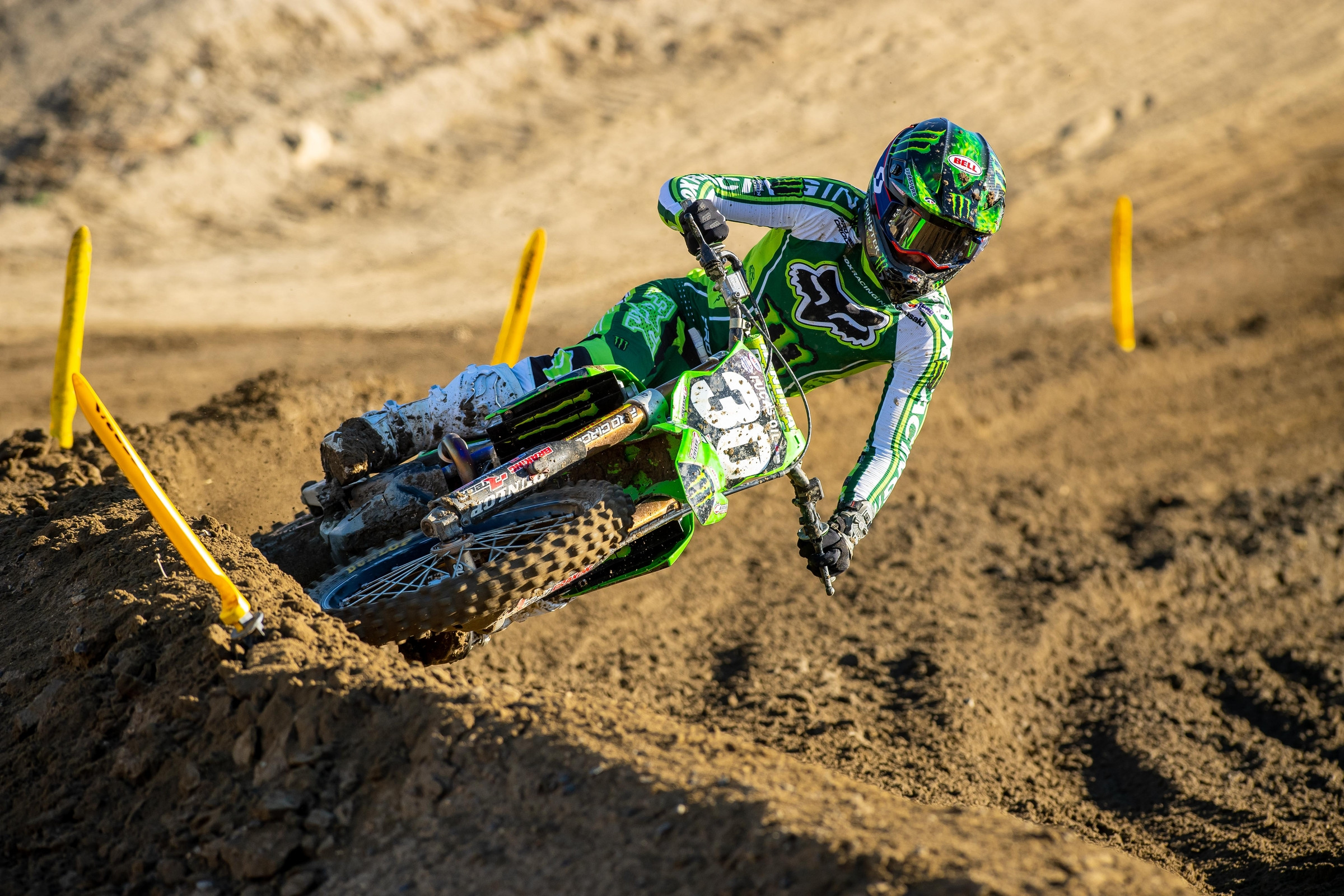 We've covered quite a bit from the podium at round 11 of Lucas Oil AMA Pro Motocross Championship from the Fox Raceway 2 National, but here are more quotes from the riders throughout the paddock.

“I felt great in Moto 2! I started around 10th but was able to make passes quick by using some secondary lines around the track. It is just so much fun when I get into the zone like that and I’m able to click off laps out front. Also, winning the race by over 40 seconds was amazing and it feels good to be coming on strong right now.”

“It was another tough day, and I had to dig really deep to get this result. The weather was really hard on us, hard on the body, but I had this championship in mind, and I really wanted it. I tried the best that I could, and it looked like it was enough to grab it. It’s just unreal to be the champion in my first year on the 450. When I was young, I dreamed of being a 250 champion, but I never really dreamed of being a 450 champion. So, it’s not even a dream come true; it’s more than that. It’s just the best thing that I have ever done in my life. Today I’m really out of emotions. It was just such an awesome year for me, and it’s so awesome to win with this Yamaha bike and with this team. I’m really happy for everybody involved in winning this championship.”

“Today was a day I’ll never forget in my life. Even though I’ve been involved in a lot of championships on the 250 side as an engine builder and crew chief, this is really special. To do this as the team manager on this team and to orchestrate things from this side; it brings tears to my eyes. The crew was incredible! There was not one person on this team that didn’t have the same goal, and we all worked hard to achieve it. It’s something none of us will ever forget. I’m proud of what Dylan did today. He rode amazing. It was a really tough day and very hot outside, but he pulled off the championship a weekend early. As for Christian [Craig], we didn’t even know if he’d be able to race, and he came out here and did what he did; it was just an awesome ride. We’ve still got one more to go, and we’ll be out there to win at Hangtown.”

"This weekend at Fox Raceway was tough. I haven't really been feeling like myself with my energy level the last couple of weekends, which have been the hottest rounds of the year. Those two things together don't mix well. After a tough first moto, I really just tried to maintain and not override anything, because I knew I was super fatigued from the beginning. I ended up throwing up trying to make a late-race charge past [Eli] Tomac, which definitely depleted me even more. I have a history of fainting when I throw up, so it was a little scary for a second, but we picked it back up in the last lap to secure third in that moto. In the second moto, I had absolutely nothing left, so we finished sixth. Not an ideal weekend, but I'm just glad we made it through the day."

“Ken showed again this week that he has amazing speed early in the race. His starts were right on point, as he was battling up front early in both motos. Unfortunately, he had a tough time with the heat and had to manage his efforts in the latter half of the motos. His fourth-overall finish for the day captured valuable points in his quest to retain second overall in the 450MX championship.”

“It was a pretty good day at Fox Raceway. I missed last weekend due to being sore from that big crash at Budds Creek, so I’m happy to be back at the races. I kind of got thrown into it today. It was really hot and rough. The track was pretty beat up, but I got two good starts and stayed up there today. So it was a good day all around, I rode well, and the bike was solid, and I got another tie of my best season finish. We’ve got one more round left, though, and I’m going to try to get on that podium.”

"I ended up eighth overall. It was a really good day and my best finish of the year. The track was almost like a supercross/outdoor track, and we were definitely tested with the heat today. The weather was brutal. I qualified ninth, and in the first moto I got tenth, which was a good ride. In the second moto I rode much better and ended up eighth, so I'm very pumped at how I'm doing."

"Brandon took another step in the right direction with his eighth-place finish. His suspension set-up didn’t translate to this track, so he did well to adapt and put his best foot forward. We’ll come up with a new setting for the final round and come out swinging."

“Today was a tough one. The track suited my style, just unfortunate that I went down in the first moto and had to battle my way back up into the top ten. I’m happy I leave here healthy and ready to finish the season off strong at Hangtown next weekend.”

“Not a bad day overall. While I had a rough second moto, I am happy with my first moto ride, especially with how hot it was out here today. I’m going to take the week to heal up, be ready for Hangtown and end the season on a high note.”

“The track was really beat up, and it was a hot one, so it was a really tough day, but I gave it everything that I had and came out with a podium. We’ll take it into next weekend and give it all we have one more time and see what happens.”

“Today was a tough one but I tried to have fun out there. In qualifying I was able to get third and got a good start in Moto 1. I just took too much time to make passes and didn’t have a chance to go for third. I had someone crash in front of me at the start of the second moto, so it felt like I had to pass the whole field going through that first lap. Bummed we didn’t get on the overall podium, but we’re looking to close out the season strong and try and get up to fifth in the standings.”

"Today was a tough day, but we managed to get fifth overall. Being sick the past two weeks hasn't helped. I was in the ‘hurt locker' all day, so happy to be walking away in one piece. Nothing really to jump up and down about, but we're third in the championship still, which is good. Looking to finish it off."

“Hunter was still feeling the effects of being sick last week but managed to dig deep to finish fifth overall for the day, earning valuable points for his goal of third overall in the 250MX championship.”

“It was a pretty rough day. I had a good start first moto and kind of put everything I had into it. I ended up on the box but I was pretty drained after that. I tried to recover best I could for second moto but I got tangled right off the start and was dead last. The bike was tweaked up a bit and 14th was all I had. It’s been a tough go but we have one round left to try and finish this thing off good.”

"Today was a tough, but good day. 10-8 moto scores for seventh overall – I'm happy with the two finishes inside the top 10 and my best overall finish. I'm excited to be going into the last round healthy and I'll do my best to put in another strong finish to wrap up the season!"

“My first day with the team was amazing, really no complaints here. I’m super stoked on how the day went, I finally got into the top-10, which is what I’ve been pushing for. My Rockstar Energy Husqvarna machine was ripping today and I’m really stoked to go back this week, get some testing done and be ready for Hangtown.”

“It was not a bad day overall for me. It was definitely tough out there, and I had to come from the back in both motos, but I did what I could in that heat to get into the top 10. I’m looking forward to next weekend.”

“The last thing you really wanted to happen on this track was to come from last and I had to do that in the first moto. I tried to put my head down and pick good lines, but had a few moments so I only got up to 15th. Thankfully in the second moto I managed a good start and put in some solid laps even with the track being the toughest it had been all day. I’m still not giving up on the chance at a podium next weekend. That’s what we’ll be working for this week.”

“It was a hot one for sure. We struggled a bit in qualifying but were able to have some okay starts and end the day with 12th overall. We’ve got one more left, and I’m looking to end the year on a high note.”

“It was a decent day, but honestly, we were hampered by bad starts. All three guys needed to start better on a track like that to make anything happen. We have one more week to try and nail this thing down, so we’re going to get back to work and finish on a high note!”

“Moto 1 was really good, I ended up holeshotting the moto and running up front for a while in the top three. I ended up slipping back to the top-five for a little bit and started getting really hot towards the end of the moto. The heat really took it out of me today, I was really struggling going to the line for the second moto, I didn’t think I was going to ride, but I did the best I could and ended up 15th. We’ve got one more round to go at Hangtown, my hometown track, so I’m looking forward to it and trying to end the season on a high note.”

"In the first moto I was caught in a first turn pile-up and my bike got wedged with another bike. I did what I could and pushed from pretty much last to 16th. In Moto 2 I got a decent start and was able to log some good laps. Then I made a slight mistake in a corner; I saved it, but lost a bunch of time, so I had to make some passes towards the end, and I wound up eleventh. Overall, I’m excited with how my riding has been and I’m excited to see how I can do at the last round!"

"It was great to be back! I felt good all day, but I just overheated in the first moto, it's as simple as that. I’m looking forward to racing the next round at Hangtown!"