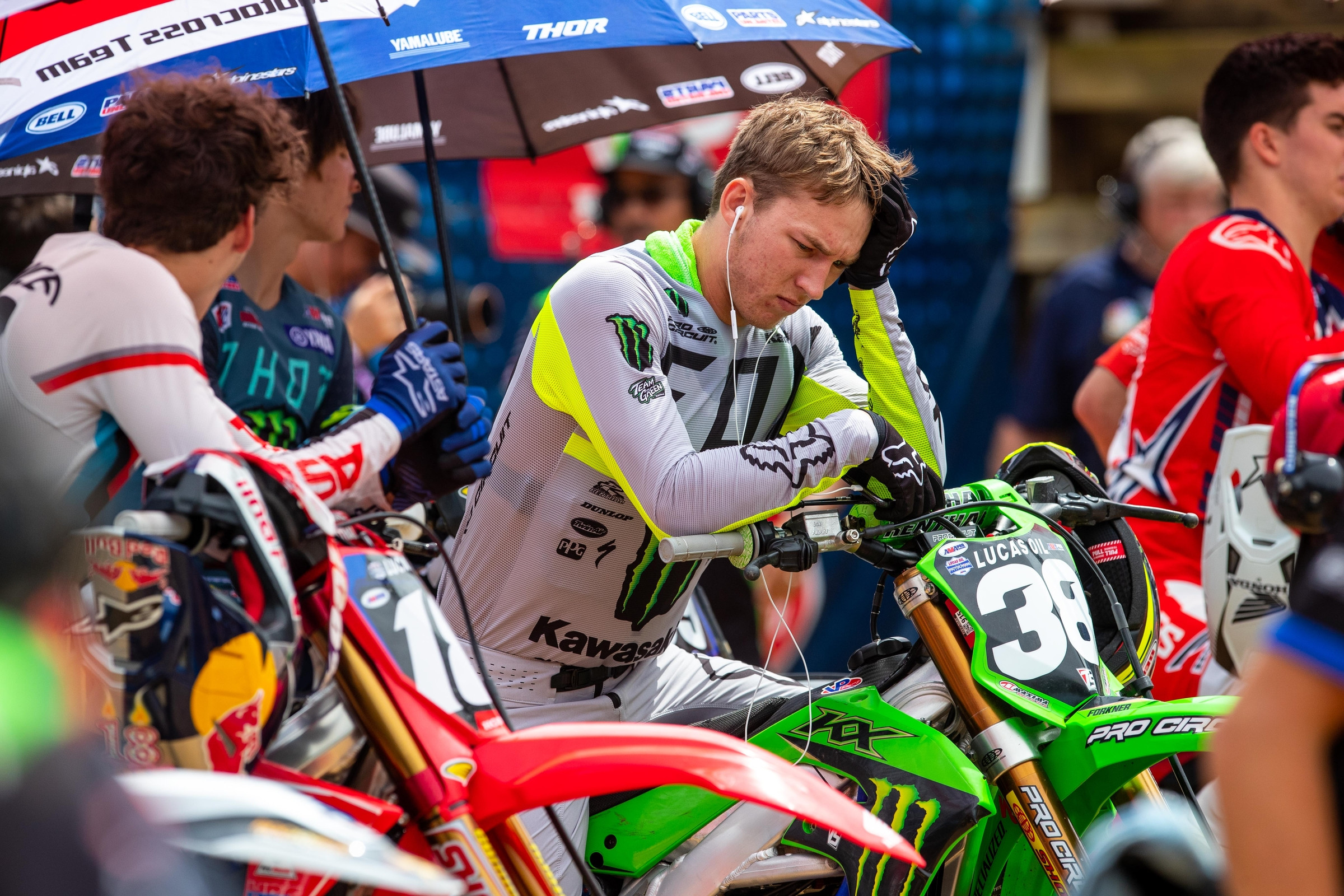 We spoke to several podium riders and title front-runners from the Budds Creek National already this week. Here’s what other riders from throughout the pack had to say about their day in Maryland.

Cooper Webb I 5-6 for fifth overall

“Today was a step in the right direction. I got a great start in Moto 1, pulled the holeshot and ran up front for a little bit, ending up fifth. Second moto, I was running with those guys up front and they were really riding fast, I tried hanging in there as long as I could. I had a good battle with Marvin at the end and we were able to catch Chase Sexton there but ended up sixth in the moto and fifth overall, which is the best result so far this year. I’m looking forward to going to Ironman next, it’s my favorite race of the year!”

Joey Savatgy I 6-7 for sixth overall

“Budds Creek never disappoints! Hot and bumpy. 6-7 for sixth, best overall for the year. Happy with the starts today, riding part not my best speed wise but leaving healthy and onto the next.”

Marvin Musquin I 10-5 for seventh overall

“It was a tough first moto. I didn’t have a great start and I had crash on the first lap so I was outside the top-20 but I gave my best and actually came back to seventh and trying to pass for sixth. But unfortunately, I crashed again with a lap-and-a-half to go and ended up 10th. The riding was much better in the second moto, so I’m happy with that and there’s some positives on the second moto. We have Indiana coming up and it’s a track that I really like, so I’m looking forward to it.”

Dean Wilson I 8-9 for eighth overall

“My day was pretty good. The first moto wasn’t too bad, it was very hot and I kind of struggled with the first half and then I got a decent flow for the second half. Second moto, I fell in the first turn and I came from second-to-last up to ninth, so I was happy with that. I felt like I rode good and came through the pack well so we’ll take it, it’s building blocks and we’ll just try to get better every weekend.”

"Tenth overall, solid day, another top ten. We want more so we'll go back to the drawing board this week and see what we can do to make progress. I'm happy with the way that I rode. I just want to keep progressing, so we'll do some more work this week and get on it for next week.”

“It was a pretty wild day at Budds Creek. Qualifying went well, and I was confident going into the motos. Unfortunately, I got a really bad start in Moto 1, and a few laps later had a big crash. I was pretty shaken up and unable to finish the moto, but I felt good enough to go out for Moto 2 and was able to get some points and finish eighth. We’ll get back to work and look to finish out the season strong.

"It was not the best day. I struggled a little with the track all day. I'm actually from this area and I used to ride here as a kid. This week we stayed here in Maryland. I had a little crash Wednesday and hurt my shoulder, so this week was almost like taking a few steps back. I've been making progress every weekend, but this one was definitely not ideal. I fought through the day and ended up 13th overall. I'm not pumped on it, but as long as I'm here fighting every weekend and racing that's all that matters. In Moto 1 I was probably outside the top 30 for a lap or two then I caught back up to 15th. In Moto 2 I had a good start and was fighting for the top ten for about 25 minutes then dropped back to 12th. It's just a learning year and day and we're just trying to take the positives out of each weekend and keep improving."

“We were going pretty good in qualifying and in that first moto. I really tried to grit my way through it today, but I was just too sore from last week’s big crash. We’re going to keep working on some therapy this week and will try again at Ironman.”

Justin Cooper I 1-4 for third overall

“It was a hot one today, which made for a tough day being sick coming into this one, but we did what we needed to do and salvaged some points. It was great to get that win in the first moto. I had a pretty good lead going, and then right at the top of the hill, I came into the rut, and it kind of gave away, and I ended up going down. It was hard to regroup, but I put it behind me and kept riding forward to get the win. In the second moto, I just didn’t have the fight for those guys. It’s time to buckle down for these last three and make them count. Thanks to the team, they were awesome all day."

Austin Forkner I 4-5 for fifth overall

“Overall, today was a big step in the right direction for me. My starts were better, my riding was fast in practice and in the motos, and I was consistent in both races. This is definitely a building block that will help me going forward. The goal from here is to keep trending upward and to execute these rides with regularity. I know I am capable of challenging the guys at the front and now we are starting to get there. I’m looking forward to Ironman."

Jo Shimoda I 7-7 for sixth overall

“Today I had to fight hard in both motos to get up into the top-10. My start was not great in the first moto, but I made passes and rode with good fitness to overtake guys throughout the whole race. In the second moto, I was around 14th off the start and worked my way up to seventh and I was not far behind the next two positions. I have been practicing my starts during the week and will keep working to put it together on the race day.”

RJ Hampshire I 9-6 for seventh overall

“Tough day, I kind of struggled all week with energy and just didn’t feel well coming in. I tried to do my best today – I had good speed but a few crashes ended up costing me pretty bad. We battled hard and had a big effort for the results, so I’m kind of bummed on that but I’ll move on and be ready for Indy.”

Dilan Schwartz I 10-8 for ninth overall

"Budds Creek was a step in the right direction. I didn’t make as many mistakes and didn’t crash on the first lap this weekend. I just have to put a few more things together and we should see an improvement in moto scores. I'm happy with how the weekend went and I'm looking forward to Indiana."

“The day started off pretty good and I felt really good on the bike, so I was pretty pleased heading into the racing portion. I was running in second for a while in Moto 1 and that’s obviously where we want to stay but we’re learning every time on the track and we’ll take a top-five. Second moto, I tangled off the start with another rider and that put me really deep in the pack and I was only able to come back to 15th. It’s a bummer, I feel like my riding has been pretty good and I’m ready to fight for these podiums but things just aren’t going my way and that’s racing, so we’ll take what we got and be ready for the next few rounds.”

“I didn’t have the day I was looking for but had a lot of fun racing at my home track. It started out pretty good qualifying seventh, but then I had a crash on the first lap of Moto 1, which set me back, but I managed to finish 14th. I had a much better second moto and got a better start, and I finished 10th for 12th overall. We’re going to get back to work and hopefully have a better result next weekend.”

“I had a pretty tough day. I didn’t really ride like myself this weekend and I really couldn’t find a flow on the track but we’ll take the positives from what we learned and really focus on the weak points in training this week and see what we can do at Ironman.”

"Budds Creek was pretty good! I'm still learning and trying to figure this stuff out the best I can, but I felt as if my riding was a lot better than last weekend. In Moto 1 I didn’t get a very good start, so I got stuck in a big pack of riders. It was very difficult to pass on the track. I was able to get a much better start in the second moto, but a couple of mistakes cost me. Overall, I’m happy with the way things are going and I’m excited to keep learning and progressing each weekend."