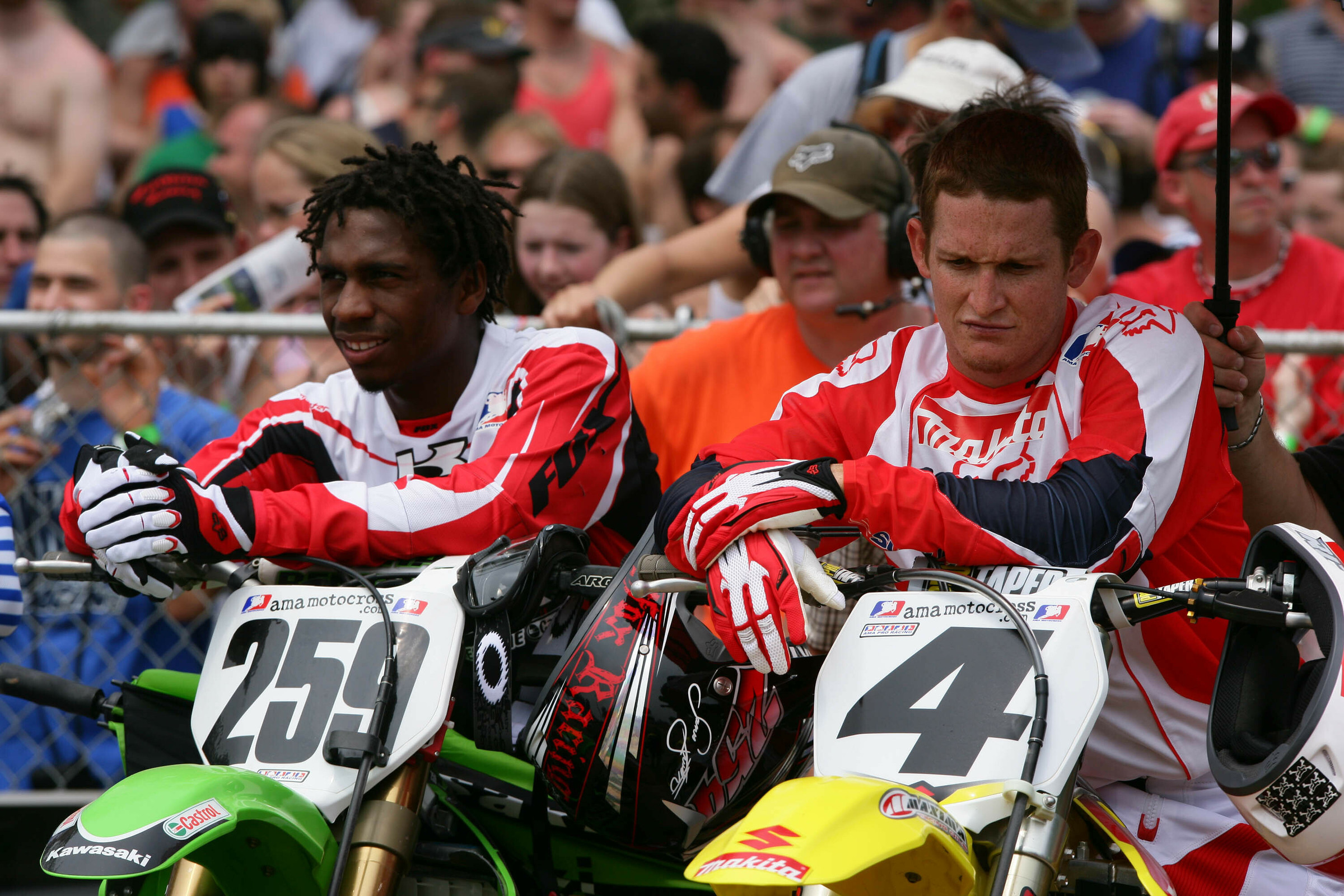 We did something like this back in March with Jeremy McGrath where we asked him about his career stats and thought that, well, if you’re gonna do the King, you have to go with the GOAT also, right? We called up Ricky Carmichael and asked him just how much he knows about the stats behind his career.
Huge shoutout to Clinton Fowler for digging these numbers up and making them make sense for us. Follow him on social media @3lapsdown for more moto goodness.

Racer X: We’re interested to see how much you know about your dominance and your races and everything else. I think there are a couple things that will really amaze you. We dug through the stats here. Do you know how many total wins you have? Not including the East/West shootouts, which don’t count, but 125 supercross wins, and 250 supercross wins, and of course all the motocross stuff. Do you know?
Ricky Carmichael: I think because I won three 125SX’s in ’97 and then I won all eight of them plus the East/West in ’98. So I think that was the ninth. That would do it. I think I have 25 125 MX, or 27. It’s one of the two, I think. I’m probably really wrong. Then 47 premier supercross wins and 103 premier MX wins on the 250/450.

And that’s not including that ’98 East/West thing. How many races did you compete in for your career, in total? Do you know?
I think it was 117 450 supercrosses. I have no idea.

It’s 2.8. You averaged the podium your entire career!
There we go. There’s always so much talk about “He’s the GOAT and Jeremy is the King of Supercross.” Most stick-and-ball sports they go by average, right? Like, [they talk about what a player's] his average is this. I think what’s amazing is how close we are on win percentage. It’s pretty incredible.

When I did this story with Jeremy, you remember when he came back after he retired? He came back for Honda?
Yeah.

He was like, “Listen, I just want you to know that those races, I wasn’t coming in to win. They were just for fun. So, if you take away those twelve races, I have a 75 percent supercross win ratio.” But if you add those 12 races he did as a comeback, for fun, he drops down to like 65. He’s just like, “Dammit.” I’m like, “Listen, bro, you can’t take away those 12 races or whatever you did.” You can’t do it but that was funny how he knew that!
That’s right. We signed up. I’ll be the first to admit. It was an eye-opener for me, 1999 and 2000, supercross was a challenge. I learned a lot. There were times when I wanted to quit, 110 percent, and I really was worried that maybe I’m just not a 250 guy, a premier class guy. I was able to button up and rein it in and really looked in the mirror and said, the only person that’s going to be able to change this is myself. I need to make better decisions, surround myself with great people, and give it a go and make even more sacrifices than what I have had. So, those first two years were absolutely miserable, but it set the stage for the final five. Definitely didn't help the win percentage!

So, motocross. How many motos did you win?
I have no clue.

One hundred and eighty nine. You won 189 motos. What percent of motos do you think you won?
Percentage-wise I’m going to go with 91.

Seventy-five percent of the motos.
Dang.

What do you think your average finish was in the outdoors?
I’m going to go with three-and-a-half?

Okay, good job. Eighty-three percent of your second motos you won.
Okay. I was going to say, for sure had to be that one.

How about 125 national wins—do you know how many you have and do you know who has got more?
I know Stew [James Stewart] has more. Does he have one or two more?

Now we’re going to get into my favorite section here. Who did you race against the most in outdoors?
Probably Red Dog [Timmy Ferry].

Out of the 127 races outdoors that you did, how many do you think you raced against Timmy?
All of them that we were both signed up in. All but 24, right? I didn’t race against him in ’98 or ’99.

How many races did Tim Ferry beat you?
I know he beat me at Budds Creek! [Laughs]

Yeah, that was just a moto although it was sweet! This is overall.
Did he beat me at Unadilla in ’97?

No.
Did he beat me in RedBud?

Never beat you at RedBud.
Dude.

How many times do you think he beat you out of 97 times?
Five times.

This is the depressing part for me. He beat you six times in the overall. I texted him that fact when I was getting ready for this story. He said, ‘Was it that many?’ He said, ‘Thanks, I will just cry myself to sleep for another decade.’ So, six times he beat you. Can you name the races?
No. I have no idea.

It all counts, man.
I know.

High Point ’01. I don't remember what happened to you that day.
I don't know.

And Glen Helen ’06 where you crashed out in practice. Still counts.
No, actually in ’06 I crashed in the first moto. Me and Stew were racing. I went down in the first moto a little over halfway and I didn’t race the second moto.

So, he beat you six races overall. How many motos do you think he beat you at?
I’m going to go with he beat me in ten motos.

For example, Hangtown ’98 he got seventh, you got eighth in the first moto. Steel City ’98 he got ninth, you got tenth.
[laughs] Man, we were going for it!

How many riders do you think have beat you in an overall in motocross? You’ve got Timmy. You’ve got [Kevin] Windham. Those are easy for you. Who else do you think?
Stew’s got me. [Chad] Reedy got me. [David] Vuillemin got me. [Sébastien] Tortelli got me. I think [Tallon] Vohland got me. [Steve] Lamson might have gotten me.

Good guesses. There are actually 13 guys who have beaten you for a win.
Okay.

But, how many riders, and who, beat you in both 125 and 250 overalls?
Okay. Kevin Windham for sure. Definitely not Lammy. I don't think I ever raced Vuillemin outdoors on a 125.

No.
I’m probably going to be pissed.

Nope, only five. Windham, Dowd, DV in the mud twice, Stew, and Tortelli.
Dang. I forgot about Stew. Duh.

Who had the most wins against you outdoors? I was surprised at this one.
Got to be Windham. Got to be.

It is Windham. I thought it would be Stew. I don't know why. Windham got you seven times.
That first year in ’97, K-Dub and I went back and forth. I won quite a bit, but still. He got the best of me, especially early in my 250 career. He seemed like he was there quite a bit.

Chad Reed never beat you in an overall, by the way. How many times did he beat you in a moto?
I know he beat me one time in 2005.

Do you remember another moto where he beat you?
I give up man.

That Glen Helen race in ‘06 that you mentioned. Chad was second, you were third.
Oh, wow. There we go.

Let’s move on to the supercross portion here. Who beat you more – MC, Stew, or Chad?
Probably Chad.

I would have said Chad too, right?
Here’s the thing. I missed several races in ’99. He beat me the majority of the time in 2000. Then after that, there weren’t too many times. So, I just figured that Chad and Stew would have topped that.

In SX, who beat you the most percentage-wise? MC, Stew, or Chad?
Stew, probably.

Yup. 55 percent of the time. Sixteen of 29 main events. Who’d you race in the most supercross main events? This one might be surprising. You’re never going to get this one. Who did you line up against in a main event the most?
I would say Barry Carsten. That’s just wrong. Is it Ferry?

No, I would have thought that also. Timmy is second.
Really? Who in the heck? I’m thinking right now. It wasn’t Ezra [Lusk], was it?

No, it wasn’t Ezra. For MC’s story, he got it because this one is pretty easy. He’s like, [Mike] Larocco or Larry Ward, one of them. They were both one and two. But you had Heath Voss. 103 of 131 of your main events.
Wow!

[Kenny] Watson started that too because Phil Lawrence told us one time on the show, Phil said one time, Kenny held a pit board out every week like, ‘Voss is your boss,’ because Voss would be beating Phil. Phil was like, ‘I hated that dude.’

Okay, this is brands now. Which brand did you win the most on in supercross? This counts 125, too.
Kawasaki.

Yup, 26. But, out of Honda, Kawi, and Suzuki, who did you have the highest win percentage with?
Honda, for sure.

Yup, 56 percent. For motocross, did you win more on a Honda or Suzuki in moto?
Good question. I won more on Honda, because I had two perfect season and ’03, I damn near won all of them. I didn’t, obviously, but I went undefeated in ’02 and ’04. Honda, right?

Honda but only by six. Thirty-three overall wins to 27. So, not that many more. Ok, motocross venues. How many tracks did you win every single race you entered?
It wouldn’t be Southwick. I got beat by Nick Wey at Millville. I won Gatorback, but they only raced one time. Hangtown?

No, Lakewood. Both times you raced there you won. You only raced twice there. Which track was your worst? Which is your lowest overall win percentage?
High Point.

Which tracks did you have your best overall win percentage at?
I think it was Unadilla, wasn’t it?

The best one?
Yeah.

No, I thought you hated Unadilla.
I hate Unadilla, but the irony of it was I always did pretty good there.

It was not Unadilla. There’s a three-way tie. You won ten of 11 races at these three tracks. This is overall wins, not motos.
Budds Creek.

Yup, that’s two.
Let’s go with Steel City. That’s the only other one I know.

Yup, the overall. Then which track do you have the most moto wins at? I was surprised at this. I thought this one would be Southwick too. It’s not Southwick.
That’s what I was kind of thinking. This is a mind-bender.

Do the math.
I’m going to say Millville.

You’re right. It was Millville. Nineteen moto wins at Millville.
Dang. That’s cool. I loved that track. That was one of my favorites through my ten years of being a pro.

Red Dog was good there, too. We were on the box there a couple times I think. So, supercross venues, not counting Anaheim because there are so many races there, where do you have the most wins both classes?
Got to be Atlanta.

Yup. Seven wins. Two on the 125, five on the big bikes. Which is the only stadium you didn’t win a 125 race in? You’ve only raced there once.
I can’t remember.

Then they busted you on the line.
Watson, actually. He probably tattled on me, if I had to guess.

No. You got them all wrong. San Francisco, three for four. Charlotte, two for two. Tampa, one for one.
Dang. Interesting.

That’s it. That’s the whole story.
That’s good. That was a lot of fun.