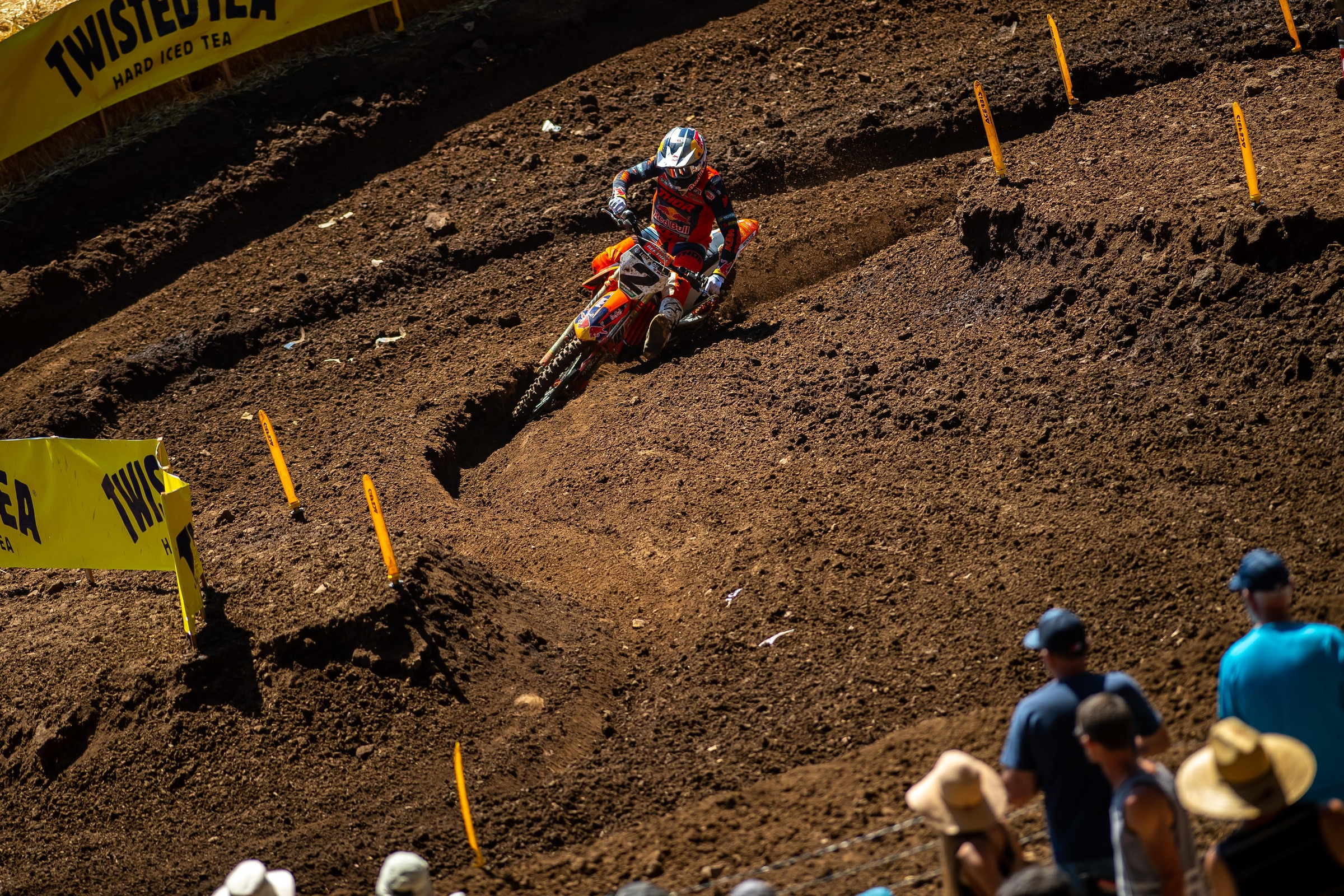 Putting the strange year that was 2020 aside, it’s not often we end up with a fairly lengthy break in season during either the Lucas Oil AMA Pro Motocross Championship or Monster Energy AMA Supercross. With the Monster Energy AMA Amateur National Motocross Championship going down all week long right now at Loretta Lynn’s Ranch in Tennessee, the Pro Motocross contingent is set to have their second off weekend in a row this coming Saturday. You have to go back to 2016 to find the last time Loretta Lynn’s provided two weekend’s off in the middle of the Pro Motocross schedule and that one came with just three rounds to go. There are still five rounds remaining in 2021 and this two-week break feels much more like a “halftime” for the championship than it does a late season rest.

Many riders have opted to use this downtime for a reset and turned off the afterburners for a bit to enjoy some rest and relaxation before charging the batteries for the last five. But the question begs asking who will actually benefit the most from this break? There will be 20 full days for riders to recoup and prepare for these last five rounds, and we’ve picked out three riders in each class who seem like this break will help the most.

It hasn’t really been the middle part of the championship that Ken Roczen was hoping for. After winning three of the first four motos of the season, Roczen didn’t find the top step again until the second moto at the Spring Creek National and has gone from just three points down after the third round to 47 points down after the seventh round. Washougal was particularly tough for the two-time champion as he dealt with an illness over the weekend and the fatigue that went with it dropped him backwards in both motos. It might already be too late to right the ship in terms of championship hopes, but Roczen has historically come out firing off breaks and Unadilla has been a strong track for him over the years.

Plessinger has not been riding bad by any means lately, but his starts have completely disappeared from where they were early in the year. After not finishing the second moto at Southwick, Plessinger has put 6-9-12-4 scores on the board at Spring Creek and Washougal. As a result, Plessinger has dropped from third to sixth in the championship as riders like Eli Tomac, Justin Barcia, and now Chase Sexton have all made strides. The good news is the actual race speed does not appear to be an issue for AP, but perhaps the break can reset his confidence he carried through the early parts of the championship, and he can rip a few good starts at Unadilla to get his season back on track.

The 2021 Monster Energy AMA Supercross champion has been consistently average all year long. Putting his 24th in the second moto at Spring Creek when he came together with Chase Sexton aside, Webb has a best result of a fifth and a worst result of an 11th. He has been straight up a mid-pack rider all year. There were glimpses of hope at Washougal for the Red Bull KTM rider after he qualified well and started out front, but he then slipped back to go 7-6 for sixth. Webb has been quite disappointed with his motocross season and when asked if he would race the Monster Energy FIM Motocross of Nations is selected, Webb essentially said he’s not even riding well enough to deserve being selected. Perhaps some more testing during the break for Webb will help him dial in for the last five rounds.

Similar to his Honda HRC teammate Ken Roczen in the 450 class, Jett Lawrence has been slowly watching his early season success fade off into the distance in favor of a Monster Energy/Star Racing Yamaha rider. Justin Cooper chipped away at Lawrence’s points lead and finally snatched it away at Spring Creek. Cooper was potentially on his way to an overall win at Washougal and would have commanded a 19-point lead in the championship heading into the break before a heavy crash late in the second moto pushed him back to eighth. Lawrence’s second moto at Washougal was the best he’d had since his first moto win at RedBud three rounds before that, so things finally trended upwards for the Australian, and the Cooper crash leaves him just eight points back now with five rounds to go. Like Plessinger, Lawrence has been suffering on starts compared to his title rival and it seems this break may equate to a steady dose of start practice in an effort to fix that problem come Unadilla (a track he has raced before in 2019). Either way, it seems we’re in for a great championship fight down the stretch in the 250 class.

The reigning 250SX East Champion has had an up and down season of Pro Motocross and the second moto at Washougal saw him actually down on the ground. Nichols crashed heavily on the new tabletop two corners after the finish line and was banged up pretty bad. He did not finish the moto and as of now is waiting to see how he feels before making a decision on racing Unadilla. Fortunately for his sake, he has the most time in season to try to recover and make it back to the starting line. It appears likely he would have needed to miss some time had we gone racing the very next weekend after Washougal.

Swoll had a hard hit in the first turn of the first moto at Washougal and would withdraw from action for the rest of the day. He had hit his head in the fall and was reportedly going to try to race the second moto but elected to sit it out and recover. The High Point overall winner hasn’t been able to find the same success he had at the third round and the break seems like it was a welcomed sight regardless of the first turn crash for Swoll. “It honestly felt like today was going to be one of those days where I thought it was going to be a good finish,” Swoll said in the Rockstar Energy Husqvarna press release. “Unfortunately, in the first moto I got in a little first-turn pileup and got ran over. I think I came away with a little ding to the head but it’s all good, we’ll take the break to recover and get back to it at Unadilla.”