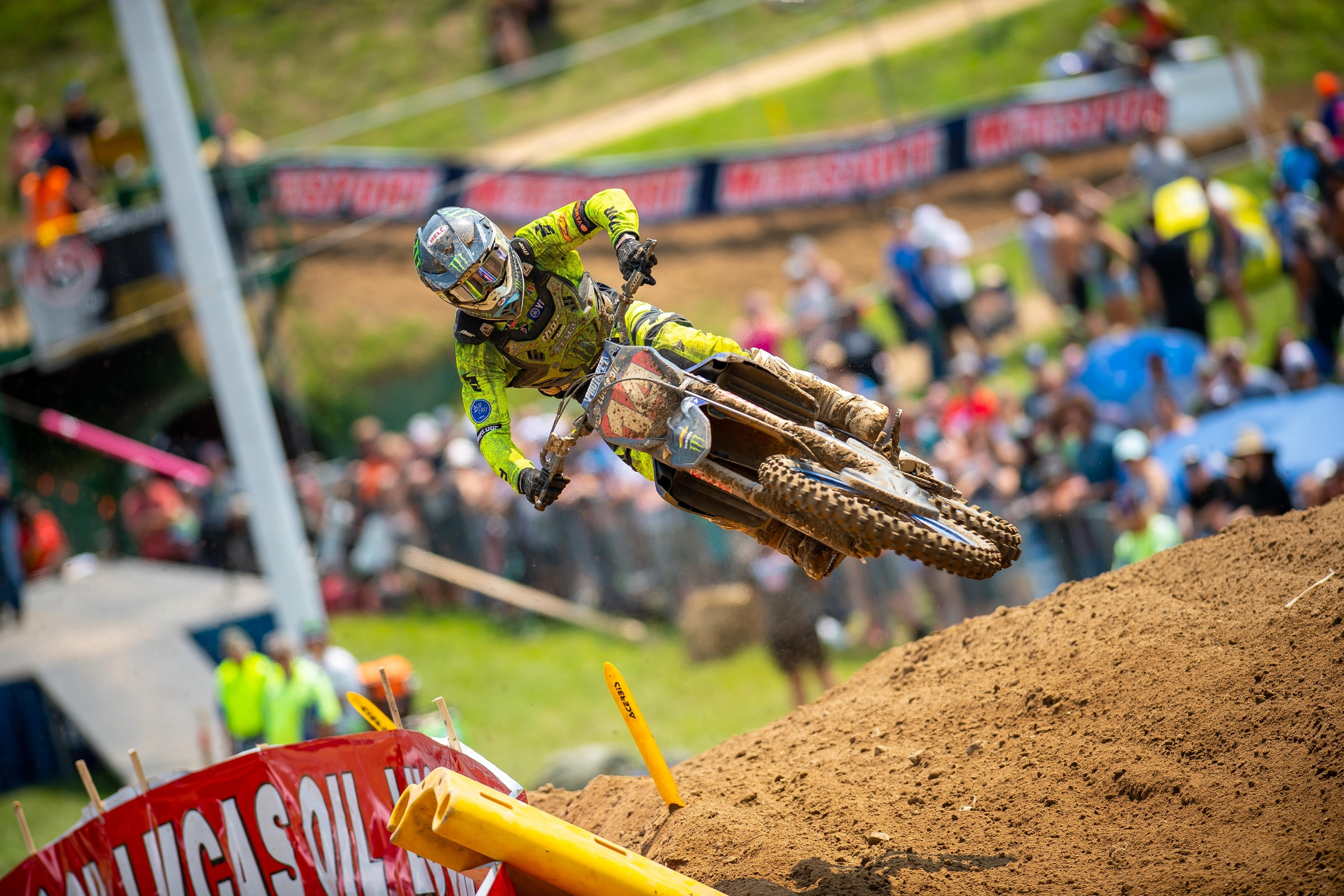 On TV the dirt at Washougal MX Park looks absolutely amazing, like a mix of loam and, as Grant Langston would call it, chocolate cake. The truth of the matter is, it’s one of the slickest, greasiest racing surfaces of the entire circuit that leaves riders searching for traction on what deceitfully appears to be a sheet of Velcro. If that wasn’t enough, visibility is tough, particularly in the second motos, due to huge shadows cast by the towering fir trees. Add up the slick surface and lack of vision, and you’ve got one seriously tricky racetrack! –Aaron Hansel

When was the last time you remember seeing someone who’d just taken over the points lead look as bummed as Justin Cooper did following the second moto at Spring Creek? It’s understandable too—he got hunted down and passed in both motos, which isn’t something any top-shelf talent like Cooper wants. The good news is, even on a day in which he didn’t win, he still managed to wrestle the red plate away from Jett Lawrence. With the series half done, will Cooper drop the hammer and roost away in the points, or will it be a dogfight to the finish with Lawrence? –Hansel

Are probably what Jett Lawrence did all week before heading to Washougal. After the High Point National, Lawrence held an 11-point lead over Cooper, but now trails by six. You can point to a few reasons why, but for the most part, his issues have stemmed from poor starts. His speed is undeniably his greatest weapon, but he simply can’t fully deploy it when he’s buried in the pack. If he wants to get the red plate back from Cooper at Washougal, he’s going to have to get out of the gate much better. –Hansel

Before 2021 we’d never seen five different 250 Class winners in the first five rounds of the Lucas Oil AMA Pro Motocross Championship. Hunter Lawrence broke that record at Southwick to become the fifth, and different, winner of the season when he went 1-1. One week later, Jeremy Martin made it an amazing six different winners in the first six rounds with his own 1-1 performance at Spring Creek. And as we head into Washougal, there are still a few winless riders capable of getting it done! Jett Lawrence, Justin Cooper, Jalek Swoll, RJ Hampshire, Hunter Lawrence, and J. Martin have all gotten theirs—who’s next? –Hansel

The logical conclusion on who might be able to extend the eyebrow-raising record discussed above has got to be Michael Mosiman. Although it hasn’t always shown on paper, the Troy Lee Designs/Red Bull/GasGas Factory Racing rider has been very, very fast in 2021. Unfortunately, a few bike issues and untimely crashes have prevented him from shining, but that all changed at Spring Creek, where he went 3-2 for second overall. He even ran down Cooper in the second moto to do it, which is something not a lot of people can say. If things go right for Mosiman at Washougal he might just be the seventh winner of the season. –Hansel

As good as the day was for the Troy Lee Designs/Red Bull/GasGas crew in the 250 Class, it was even better in the 450 Class, where Justin Barcia recorded the team’s first ever national win in the 450 Class. It was also the first national win for Barcia since he won Ironman in 2018. In case you’re counting, that’s 25 events between then and Spring Creek! The mental game is a huge part of going fast for most riders, and Barcia is certainly no different. Now that he’s done it once, will we see him up front yet again at Washougal? -Hansel

There aren’t very many riders who can have an off day and still end up on the podium, but that’s just the kind of year rookie sensation Dylan Ferrandis is having. After logging second in the first moto, he went down twice in the second moto. But despite those errors, he still charged back up to fifth to secure third overall! Still, it was the first time he hasn’t finished a moto on the podium. Will that fuel the already raging fire of Ferrandis, or will he even remember it when the gate drops at Washougal? -Hansel

Momentum versus points. That’s the old battle in racing. Ken Roczen lost more points at Millville due to a first-turn crash in moto one that led to a DNF, but he gained some momentum by wining moto two. He had not won a moto since his 1-1 sweep at Thunder Valley, and at that point he had won three motos in a row. Kinda reminiscent of his three-race win streak early in Monster Energy AMA Supercross, right? He won three in a row but only won one more after that. Does this singular moto win prove Roczen is back at the top and more wins will come, or was it just one win? We’ll see this weekend. –Jason Weigandt

Eli Tomac was bound and determined to end his first-moto issues last week at Millville, and even rounding the first turn so far behind the pack that Ken Roczen and Chase Sexton had time to crash BEFORE he even got there. That left him about 33rd or so….and he raged all the way to third place. That’s his best first-moto result this year. Unfortunately, he was also out of energy, so moto two wasn’t the blaze of glory we had seen at the last two races. Regardless, Eli now has speed in the first moto. Isn’t it time he finally gets an overall win? –Weigandt

We didn’t get a Washougal National last year. At the races that have returned to the schedule in 2021, like High Point and Southwick, the crowds have been crazy, and the vibe of seeing familiar terrain back on the tour has been impressive. There will be race winners on Saturday, but just seeing a 40-rider pack of bikes thundering up Washougal’s famous Horsepower Hill will be a sight to see, and the real winners will be the faithful jammed up against the fence. As much as we will talk about the results, the experience will be just as big a part of this weekend. –Weigandt