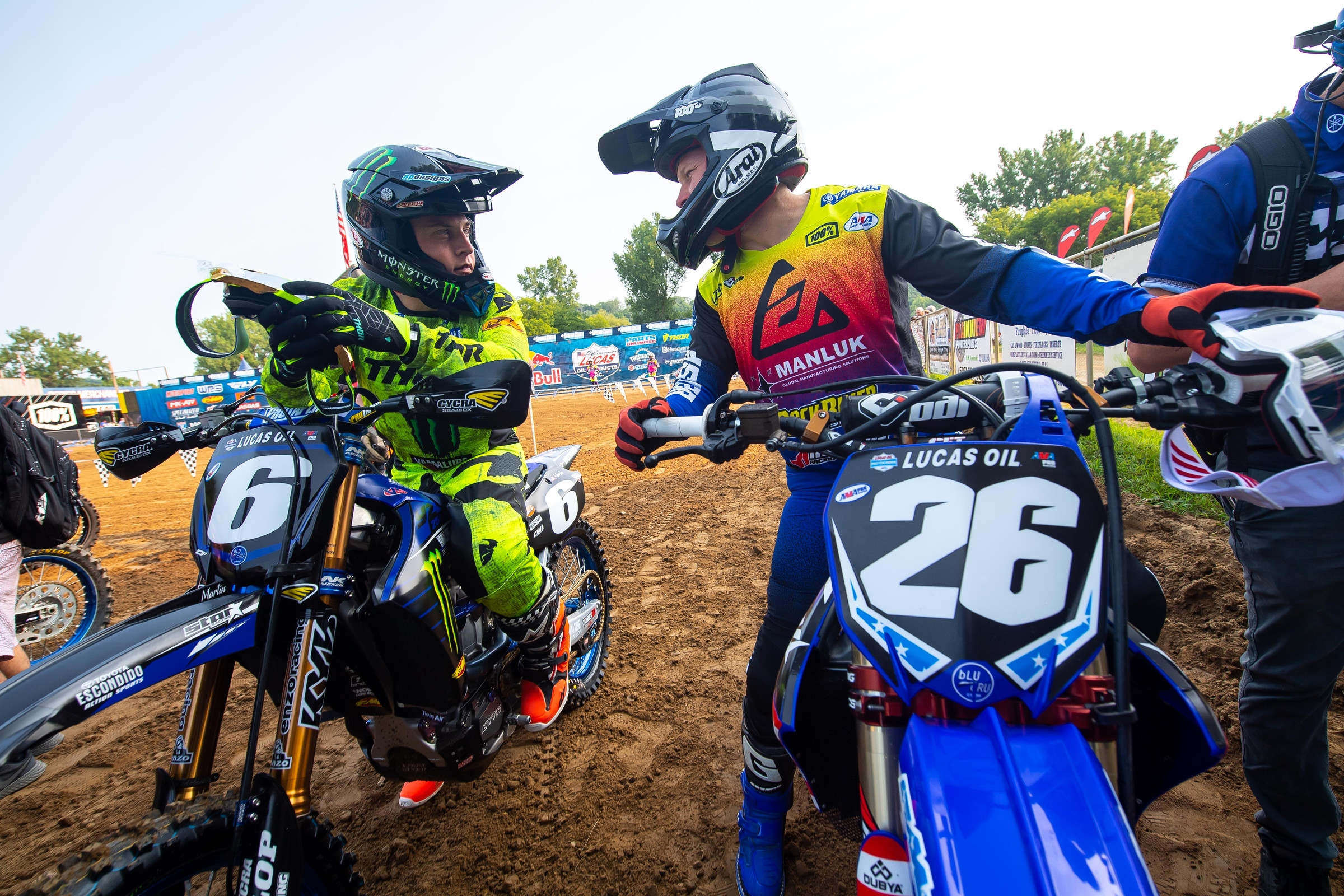 So far this season we’ve had five different overall winners in as many rounds of the 250 Class. Jett Lawrence, Justin Cooper, Jalek Swoll, RJ Hampshire, and now, Hunter Lawrence have all taken turns spraying champagne from the middle of the podium. And, in case you haven’t noticed yet, there’s still plenty of talent left capable of lighting the torches for the first time this season. The five in five is already a record. Will we go six-deep on Saturday? –Aaron Hansel

The Weight of the Plate

Jett Lawrence was phenomenal at the series opener, and he’s been pretty good since then too. Surprisingly enough, however, he hasn’t won an overall since his soberingly speedy performance at Fox Raceway. He also just had his worst day of the season so far at Southwick, where he went 9-3 for sixth overall. As a result, his main competitor, Justin Cooper, closed back to within three points of Lawrence in the championship standings. He’s still got the red plate, but Cooper ain’t going anywhere either. If Lawrence wants to keep this championship run going he’s going to need to start getting some more wins. –Hansel

There was zero denying Hunter Lawrence last week at Southwick. The Honda HRC rider was clearly on his game in the sand, going 1-1 and withstanding pressure from Justin Cooper in the second moto before eventually motoring away and winning by nearly five seconds. It was literally the most dominant performance of the season—he’s the first 250 rider to log perfect 1-1 scores in 2021. Will he become the first 250 rider of the year to win multiple Nationals when the series heads to Spring Creek this Saturday? –Hansel

Buried in the Sand

If you’re looking for RJ Hampshire’s shot at winning the overall at Southwick, you’ll find it somewhere buried in the sand, which is where he found himself several times last Saturday. Also, the Saturday before that. Hampshire’s speed has been undeniable lately, but unfortunately so has his penchant for closely inspecting the soil on which he’s racing. How many more potential wins will Hampshire crash away this season? Hopefully none, but if he’s leading at Spring Creek, you know all the fingers will be crossed in the Rockstar Energy Husqvarna Factory Racing pits until the checkers fly. –Hansel

Buried in the Sand Redux

While poking around in the sand looking for Hampshire’s lost opportunity, you might also come across Michael Mosiman’s . The Troy Lee Designs Red Bull GasGas rider had a golden opportunity to bring home a win in the first 250 moto when he inherited the lead when Hampshire went down. He led for five laps, and although under eventual pressure from Hunter Lawrence, was holding strong. Unfortunately he made a mistake and went down and ended up seventh. That’s not bad, but it could have been so much better. Will he have the same pace, sans crashes, at Spring Creek? –Hansel

The good news for Eli Tomac is that he’s been amazing at the last three Nationals. The bad news? The magic has only made appearances exclusively in the second motos. At High Point he was sixth in the first moto, at RedBud he was fourth, and at Southwick he was eighth! It’s much better than the slump he was in at the beginning of the season, but it’s not anywhere near where a three-time 450 National Champ wants to be. Tomac is good at Spring Creek, and if he can dial in the first moto, maybe we’ll see him get his first overall win of 2021 this Saturday. –Hansel

Most people refer to RedBud as their favorite round of Lucas Oil AMA Pro Motocross, but if you want to know which venue has the best track, it’s hands down Spring Creek. Often referred to as a “racer’s track,” Spring Creek has all kinds of different terrain. Want a ridiculously steep and long hill to go up and down? Look no further than Mount Martin. Want a demanding section of sand rollers? That’s Spring Creek’s most iconic section! Oh, it’s also got a crazy long start that turns right at the end, off-camber turns, high-speed flat corners, deep loam, cool jumps and even nasty hardpack in places. If you want to win at Spring Creek you’ve got to be a well-rounded racer. –Hansel

We mention this almost every week: Cooper Webb and his Red Bull KTM teammate Marvin Musquin are not generating the expected results. Will it turn around? Round six is pretty late to discover enough to jump from top ten to winning, but Webb is working on it, saying he has changed a bunch of things with his bike and his “program” and feeling like he finally made some progress last week at Southwick, where he finished in the top five. In 2019, Webb was also struggling and then pulled a 1-1 at Millville out of nowhere (he had finished fourth the previous weekend at RedBud). Are things happening? Can Webb become a podium guy? We’ll see. – Jason Weigandt

For a long time we thought we would not get either Jeremy or Alex Martin racing at their home race at Millville, as injuries looked likely to spoil their season. Somehow they’re back way ahead of time, Jeremy returning from broken fingers a few weeks ago, and Alex coming back from a broken arm this weekend. They’re not 100 percent so a race win could be unlikely, but home turf could generate a little extra adrenaline. Will it be enough to get a Martin on the podium? –Weigandt

Dylan Ferrandis is marching away in this series, now stretching his points lead over Ken Roczen to 19. More importantly, he’s handling every challenge thrown his way, including bad starts or even bike problems last week . At this point it looks unlikely that Ferrandis is going to throw this away or hand this over, so as the second half looms, someone is going to have to step up, starting with second-ranked Ken Roczen. Roczen has said he’s past the point of stressing over results and just wants to have good weekends and let the points play out. How will that play at Millville. –Weigandt