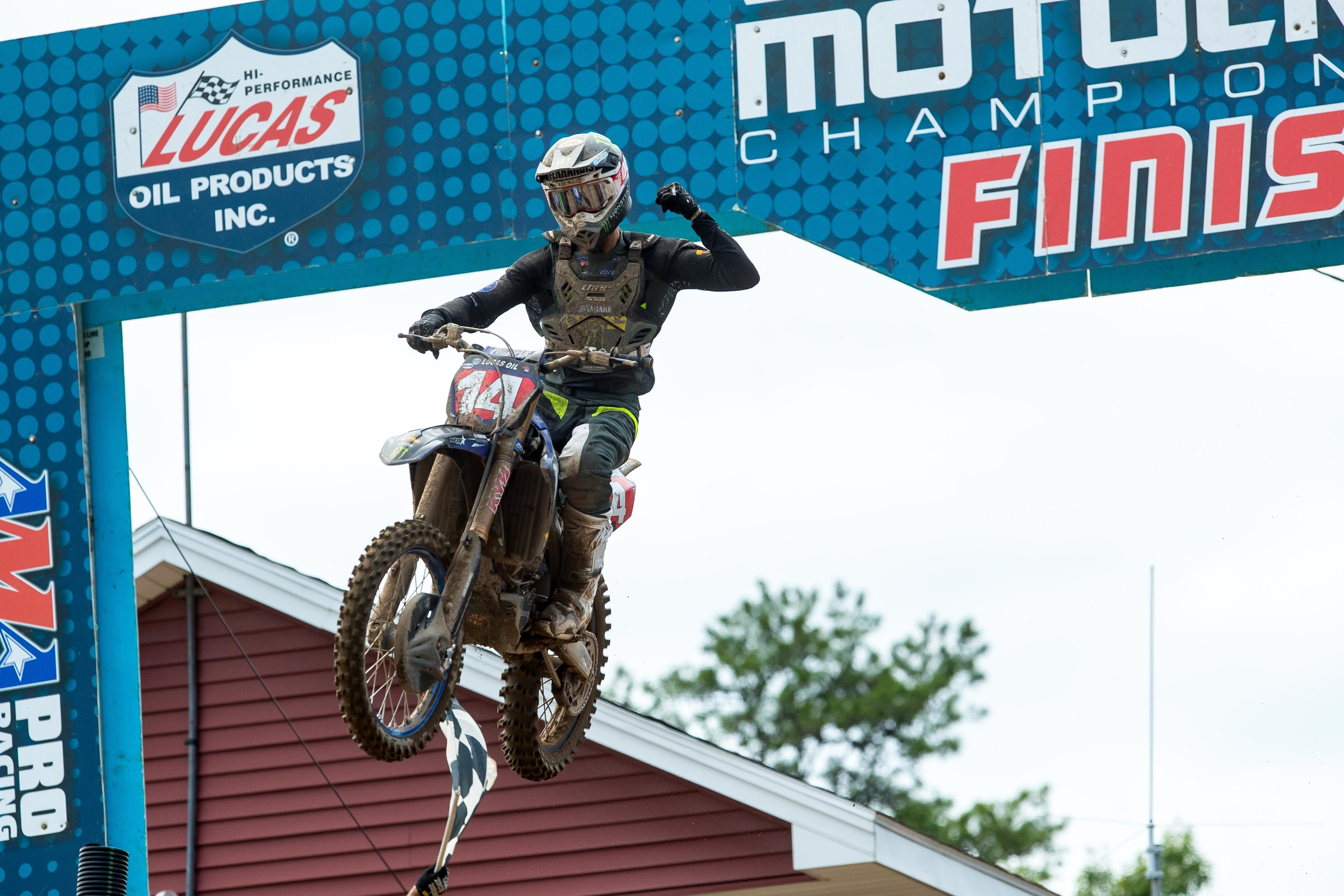 The Conversation Ferrandis Brings It Home

Monster Energy/Star Racing Yamaha's Dylan Ferrandis is a winner again, taking his fourth 450 overall win in the Lucas Oil AMA Pro Motocross Championship in just five starts. Yet this one was frustrating. He led moto one wire to wire after a rare holeshot, but his bike started steaming in moto two, and he was left in salvage mode the rest of the way. He took third in the moto, enough to secure the overall win with 1-3 scores.

The determined Frenchman wanted to try to run down Ken Roczen in moto two, though. He had to go conservative instead. Ferrandis spoke to the media after the race.

Dylan, are you surprised at where you stand? Would a 450 championship be worth more of a thrill than the 250 championship on a supercross bike?
Dylan Ferrandis: Yeah, for sure I’m surprised. I never expected to be that good this season, but now I kind of try to match the result every weekend, try to win. I’m surprised, but it seems really good. It’s hard to compare 250 and 450. The competition is much more in 450 and there is not much room for mistakes. Right now everything is going well. I just don’t really think about the championship or winning races or anything. I just take it race by race and do the best I can and I see at the end of the day. It’s working great right now and I will keep doing that.

Second moto, we saw the steam coming out of the bike and the team alluded to that. When you came in and you had sort of that frustration on your face. Was that because you felt like you could go with Eli in that final moto and you couldn’t push all the way through?
I don't think I could match Eli’s speed in moto two. He was really on fire and was riding really well. I feel like I could have came back on Ken and tried to challenge him in the last lap. So for sure I was really frustrated about that. Also frustrated a little bit because I had a small crash. So without the small crash, maybe I could have passed Ken. I don't know. For sure, the team asked me from the fourth lap to the end to slow down and to just secure P3. I was not really listening. I wanted to go back to the front and try to pass Ken, but at the end they were so pushing for me to slow down that I had no choice but to listen and to do it. So for sure it was safer I think for the bike, but we don’t know. We don’t really know the 450 what can we do with it. We don’t know how far we can go in that condition. So I frustrated because of not leaving everything out on the track. The past few races I gave everything I had, and this race I had a pretty easy first moto and the second moto I just couldn’t push through to the end. The good thing is I get the overall so that’s the most important.

Dylan, you kind of mentioned a little bit earlier when you got that first win that you were hard on the team. You’re really thankful that they’ve been sticking with you through the long days. You’re able to deliver the results. Do you feel relief that you’re backing up these good results and if you’re hard on the team at least it’s paying off?
I’m working really hard, but I’m not the only one. The team is working every day, weekends, on days off. They never count the hours they do. I’m there because of them. They do the testing and everything. They do the bike. So, I’m not the only one. The supercross season we were struggling so much trying to have this Yamaha 450 ready to win and it was really hard. We had a lot of disappointing races and stuff and we were struggling hard at some point to get the bike to gel for the race and now finally we have the bike we worked for. It’s really good for everybody. I think this team has worked so hard the last few years, but they didn’t get the results they expect. So, giving them the result today is awesome. I’m proud to be part of this group of people who work really hard, as hard as me. At the end, everybody is happy and everybody gets a reward.

So now that you’ve made this kind of progress with the bike, do you think you can maybe fight for the supercross title next year?
Yeah, for sure. The goal is to win every championship when I go on the line. So, like I said, this year we weren't ready to win races in supercross. We learned a lot, me as a rookie and also the team as a rookie. We were all surprised, but at the same time we all work so hard for this motocross championship. So I think we deserve the position where we are now and we can see like at Red Bud we had three Yamaha bikes in the top five, so it’s not only me. It’s the whole team that works together and put the Yamaha bike on top. For sure, as soon as the motocross will be over, the goal is to be ready for supercross and winning supercross. We all want that. That’s as important as motocross, for sure.

Did you guys come to any conclusion on what was happening with the bike there in that second moto?
Not really. I actually don’t know. I asked the team to tell me because it’s going to be really important to know for the future. I think Eli was really on fire this moto and I tried to stay in front of him for the first part of the moto, and I was just pushing the bike too much and not being too smooth and just using too much the clutch and revving the bike. So the bike just got too much heat. After that, I don't know. We still don’t know right now, but for sure we’re going to know in the next few days. It’s important for us to know for the future if it happens again to know how long can we go with the bike that smokes.