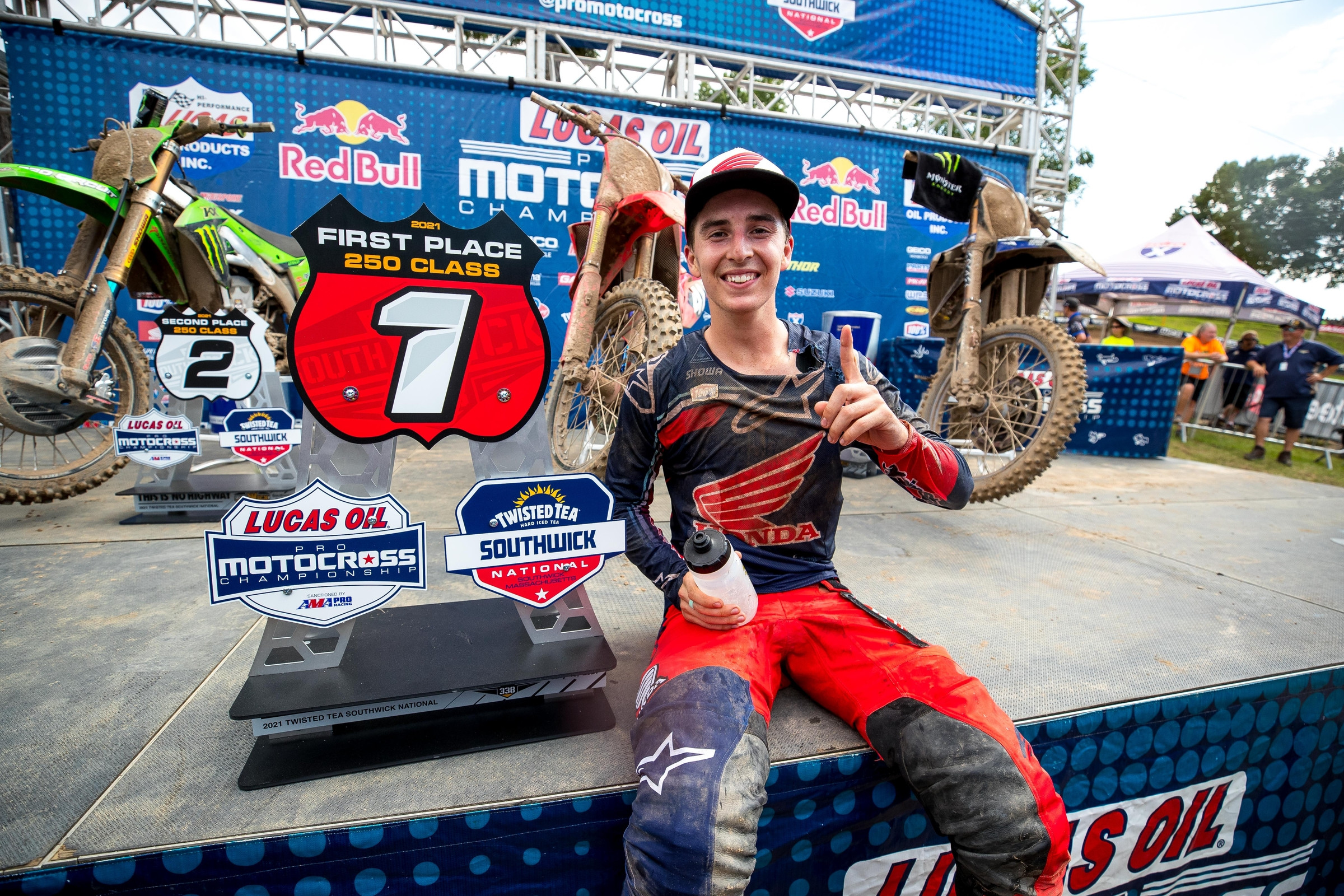 In 2019, Australian Hunter Lawrence earned two moto wins and two overall podiums in his debut season in the Lucas Oil AMA Pro Motocross Championship. He was banged up along the way (a broken collarbone and a knee injury at the end of the season that kept him out of the final) but his debut season racing in the U.S. was solid.

Unfortunately his 2020 season was not the case as it was filled with injuries. He missed most of the 2020 Monster Energy AMA Supercross Championship due to injury (he made it back for the final three 250SX West Region races of the year but did not qualify for the Dave Coombs Sr. East/West Showdown finale). From there, things only got worse as a damaged shoulder before the season lingered all summer and he also struggled with other ongoing health issues where he felt weak and unable to sustain high speeds all moto long. Due to his issues, when he crashed, not matter how big or small, he would suffer a significant injury.

Now, fully healthy and on a Honda HRC machine, Lawrence won his first supercross main event a few months ago and has continued to put in one solid result after another. At the Southwick National over the weekend, he broke through with a huge 1-1 day where he earned his first Pro Motocross overall win. Hunter was not able to attend the post-race press conference because a flight home, but we caught up to him during a media corral after the race.

Racer X: Congrats on the win. Take us through your day.
Hunter Lawrence: It started pretty good. Nice little breakfast and Dr. G [Dr. H. Rey Gubernick] gave me a little service, [fixed] me up and stuff. Then yeah, qualifying was pretty good, top three in both. I think we went P2 and P3 in qualifying, it was good. First moto was pretty good. Average start, made some pretty good passes and yeah, got into the lead, so that was really cool. I wasn’t trying to get too high on being stoked for that cause I knew we had to finish the job in the second one, and we did so that was pretty cool. Pretty happy with how the day went. One-one, it don’t get much better than that, thankfully. [Laughs] So it was pretty awesome, pretty awesome day.

That was your first moto win since 2019. Then you back it up with the moto two win. With everything you went through last year with the injuries and the health issues, what does this mean to you now to be here today with this big win?
Dude, I’ve been to hell and back like five times it feels like in the past two years. When you’re in the lowest of lows you always dream of it, but you can never actually visualize it and see it because you’re in a hole, you’re sucking, you’re injured, you’re not healthy, it’s so fricken hard. So the will power, the mental strength and just the hard work to pull yourself out of the hole and then build on it to get to where we are now, it’s awesome. So I’m super proud of myself. My whole circle is proud of me. And I’m so happy to them all of them in my corner because I think I have the best program around me and that speaks for itself—it’s huge.

Was there anything you did differently coming into this week? I know everyone was riding sand tracks. But anything else that was different in the program? Or was it just the same routine, it all just clicked today? You seemed to be on it all day from the moment you touched the track.
Yeah, exactly that. It all just clicked today. [Laughs] I mean we rode sand this week, but I mean, everyone else did, everyone knew Southwick was sand—or at least, like, sand for here in America. Yeah, I just had things I knew I needed to work on, what I needed to do for myself every time I went on the track and I did that and it just went really well. I was able to be focus and ride within my comfort zone all day, so that was really cool.

Late in that second moto you were going after Justin Cooper. Talk about that battle with him. And could you tell your brother was coming up behind you at all?
No, I didn’t know [where Jett was], I was just racing forward. I knew I had the speed to win so it was more just me pacing the race, let’s say. I knew Cooper was right there and for a few good few laps it felt like that we were kind of like a second, two seconds. We got to like the 20-minute mark I believe, and I was like, All right. So I started to put the pressure on and as soon as I got into the lead, honestly, it was just about managing it, you know. I was just in a comfortable position I knew I was able to pull it when I needed and minimize risk taking and stuff like that just to finish a solid moto. So that was kinda the head game then.

Was there anything specific you took from him, and you could point out to where you could strike an attack on him when you needed to go?
Yeah, for sure. It was whatever opportunity came, if I was in striking range I was going to take it but I knew where I was definitely stronger, I knew where he was closer speed to me and he was good. So yeah, just learned and stuff and I knew I had a little reserve left for the last ten minutes of the race if I had to use it, so that alone was a good thing to have, especially in a tough, sand race.

Hear from Hunter Lawrence during the media coral in the video below.