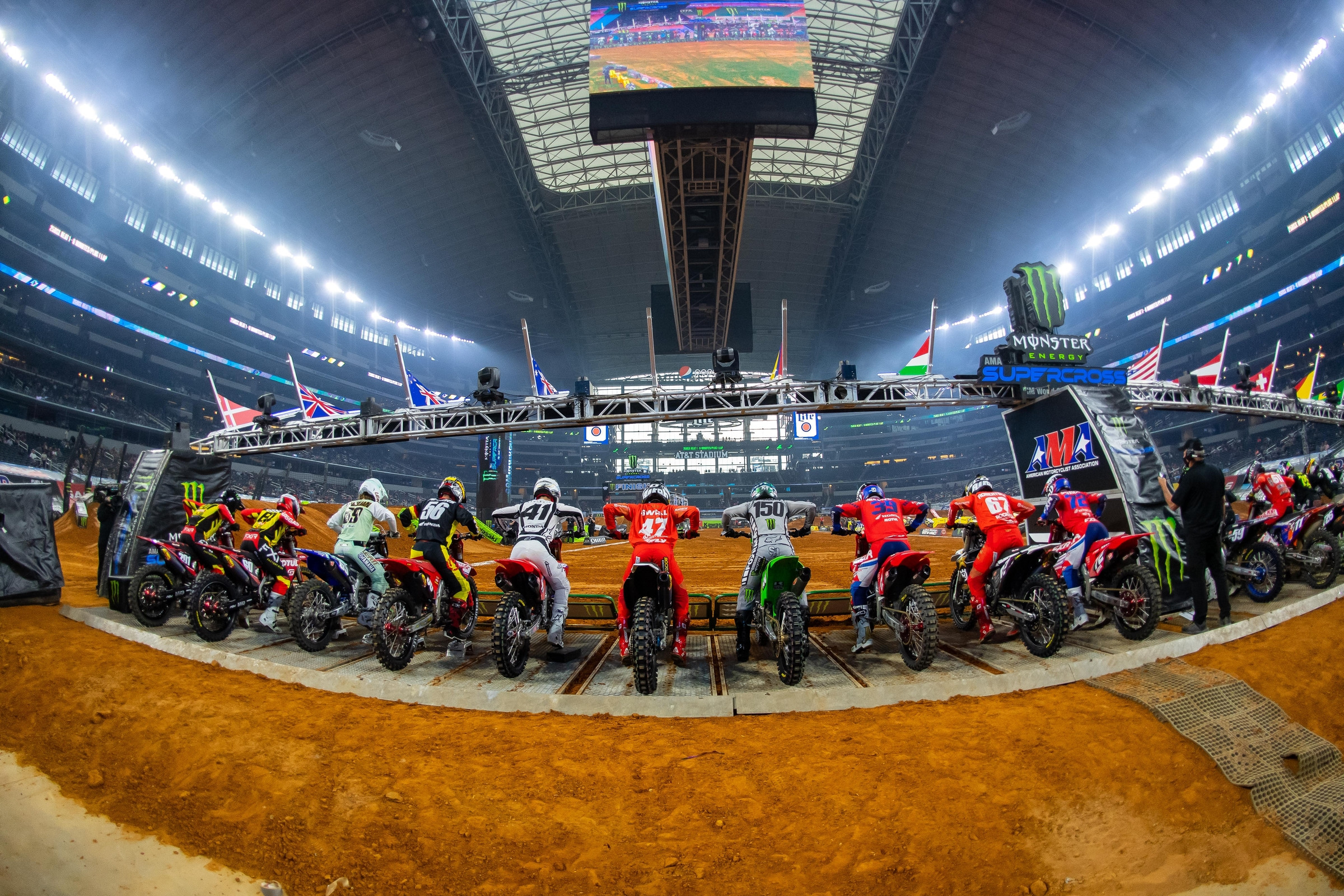 News broke earlier this week that the FIM is no longer part of the sanctioning process for Monster Energy AMA Supercross. From now on, the series is back to running via a promoter (Feld Motorsports) and one sanctioning body, the American Motorcyclist Association.

What does this mean? Here are a few opinions.

Davey Coombs: Twenty years is a long time ago in this world, let alone this sport. Back in 2001 almost everyone was riding two-strokes, nearly every photographer was shooting the races with film, Jeremy McGrath was wearing #1, Chad Reed was a practically unknown in supercross circles, James “Bubba” Stewart was in the Schoolboy class, Ryan Dungey was merely trying to qualify for Loretta Lynn’s on his 65, and Ryan Villopoto finished second to Jason Lawrence in the 85cc (12-13) Stock class.

At the top of the pyramid, the 2001 AMA/EA Sports Supercross Championship had an attendance of 797,829 fans, with millions more watching at home on ESPN. All of which apparently made it a good time for AMA Pro Racing to decide to break-up with longtime SX series promoter Clear Channel Entertainment and hand the keys to the series they simply sanctioned to a concert promoter from Chicago called Jam Sports. Jam Sports had zero experience in motorsports. This, basically, started a war.

That war would be short-lived. Roy Janson, the then-motorsports director for Clear Channel, came up with the master stroke idea of sanctioning the series through the FIM (Fédération Internationale de Motocyclisme) instead. It would change AMA Supercross into the FIM World Supercross Championship. It was check and checkmate in one move, because the FIM had a rule that said member nations could not hold domestic championship events on the same day as a world championship event. The AMA was a member of the FIM and had to abide by that rule. So, the AMA could not hold AMA supercross races on the same day as an FIM World Supercross Championship race if it were to run in the U.S. Just like that, it was over. The AMA was forced back to the bargaining table, and Jam Sports eventually went away without ever running a single motorcycle race, though they left with some $30 million that they were awarded in an anti-trust lawsuit they filed (and won) against Clear Channel.

That should have been the end of a couple of ugly, self-inflicted errors by both AMA Pro Racing and Clear Channel, but there was one problem: even with the AMA back in the fold, the FIM didn’t want to go away from supercross, as they had long coveted the series but had long been unable to figure out how to make it work for them. This led to a weird three-party marriage of sorts. Beginning in 2003, there were two sanctioning bodies—FIM and AMA—for U.S. Supercross. It would stay that way until, well, this week. Feld Motor Sports (which purchased the motorsports promotion portion of Clear Channel a decade ago, including supercross) finally washed their hands of the whole dysfunctional mess. They were apparently finally comfortable with the fact that the AMA was not going to commit the same original sin again, as well as the fact that international expansion is no longer really in their plans, or at least not anytime soon in a world that changed a lot in 2020, not to mention the previous 19 years…

Think about that for a second. Now, for added perspective, think about this: The feud between the promoter and the sanctioning body started in 2001, the same year as the September 11 attacks on our country, which led the U.S. military to go into Afghanistan, thus beginning the longest war in U.S. history. Well, this SX feud and its aftermath have lasted longer than the war in Afghanistan did.

Some of the lowlights of this 20-year deal for me include: World Supercross rounds in Geneva, Arnhem, and Seville—European races with no European-based riders; Fuelgates 1 and 2; the ridiculous handling of the anti-doping infractions of James Stewart, Cade Clason, Broc Tickle, and Christian Craig; the black-flagging of Chad Reed at that one Anaheim; Canadian races with no Canadian participants (and of course those white-panted Canadian officials in Vancouver which was a great city but a not-so-great race); two SX champions in 2006—Ricky in the AMA, James in the FIM; two licenses every year for each rider; two rulebooks; Jeremy McGrath’s very brief KTM chapter and, maybe the most forgotten WTF? moment in all of this: your 2004 FIM World Supercross “GP” Champion, Heath Voss! (Though he was only your 2004 seventh-place AMA Supercross finisher.)

So where do we go from here? Up. If 2020 taught us anything in this sport, it’s how everyone working together can get us through the worst crisis, so now that we’re seeing a wonderful surge in bike sales, participants, viewers and fans, maybe we can all get on the same page and come up with some ways to make the sport better, without having to first run it by the powers-that-be in Geneva, Switzerland. (I would like to add that current FIM President Jorge Viegas, who had nothing to do with what happened in 2001, has been a much better director in matters involving the AMA as well as supercross than what we have seen previously. More of those matters I listed above happened early, rather than later, in the FIM tenure. Still, it’s time to make the series what it’s always supposed to have been, and that’s the AMA Supercross Championship. Period.)

We’ll never get these twenty years back, but despite the dueling sanctioning bodies over the years, Monster Energy AMA Supercross still thrived. COVID prevented 2020 and 2021 from being great, but that said, it’s starting to feel like 2022 (the schedule of which probably won’t be announced until fall) is going to be a blockbuster.

Jason Weigandt: Well, we just lost half of the comments under our stories now. No more, “Why is the FIM involved in an American series?” There is a legitimate answer to that question, which Davey explained above. The problem is that it’s such an insider story, and now so old, that I wouldn’t expect most fans to know or care. It was also confusing. Even now, since the announcement earlier this week, fans seem confused. What you really need to know is that this won't lead to any huge, massive changes that will leave supercross as unrecognizable. This is more of a behind-the-scenes situation, really.

I’ll explain it here as simply as possible: The existing promoter [Feld] will continue to run the races. So you’ll see the same stadiums, the same show, the same TV, the same stuff. The AMA will still sanction the races, so the series will still have a rulebook, results and officials. The same racers and teams will participate. Supercross as you know it is not going away, it’s not done, it’s not over. The recipe really won't change, but there’s just one less cook in the kitchen.

As far as managing the series going forward, it actually reminds me of the handling balance of a dirt bike. You want a bike to be two things that are opposed to each other: nimble and stable. Reducing the red tape of answering to two sanctioning bodies will make it easier to make smart changes. I don't expect to see anything major, but it ad to be tough keeping riders, teams, sponsors, fans, and both the AMA and FIM happy. Maybe we end up with simplified drug testing rules? Maybe less cost for everyone running or even participating in the races? I don’t know if this will lead to a dramatic change or not. That remains to be seen.

Okay, so the series can be more nimble. Will it be stable? There was always this rumor that the FIM World Championship part of supercross would lead to global expansion or more races, and I know riders and teams are against more travel and more events. Now that conversation is gone.

I’d be completely missing the point here if I didn’t mention that the AMA has not always made the right calls and decisions. As an example, previous AMA regimes are what led this whole FIM thing to happen in the first place (see Davey’s story above). I would have to assume here that Feld isn’t worried about this anymore. This global pandemic has done much to teach industries to work together to preserve jobs, even completely different ones, from riders and mechanics to promoters, sponsors, media and more. Lots of people who are hopeless if racing goes away. We saw the abyss not that long ago, and while this industry has come roaring back, a little flash of what life would be like without racing might ensure cooler heads prevail for a while. I think we would all welcome that.

Steve Matthes: Hallelujah! Ding Dong the witch is gone and whatever else you want to say about the folks at Feld Entertainment breaking up with the FIM. It’s something I’ve been saying for years on my show, once the draconian drug test suspensions came rolling in through the World Anti-Doping Agency (WADA), which we as a sport were required to use if we were going to have FIM sanctioning. Getting the FIM in was a brilliant bit of chess to keep the SX championship but why the guys at Feld kept renewing the agreement over the years was beyond me. At one point we had different rules for the different classes, different referees, penalties, etc. That’s crazy!

What did the FIM bring to the table? Not much as far as I can tell, insiders tell me that one of the reasons Feld kept renewing the deal was so that they could go to Europe or wherever to have a race and they’d be politically in the right domain to do it. Another person told me that the FIM couldn’t turn around and award an SX sanction to Europe if they wanted to run their own series (which they did for a number of years before all this). To both of those claims, I say phooey. American AMA Supercross is THE premier off-road series in the world, it’s got the most prestige, it’s got the most hype, it’s what every rider out there dreams of racing. When people think supercross, they will always think Anaheim, for example. In short, Feld had the big stick and they somehow refused to use it. Poor Cade Clason, James Stewart, and Broc Tickle who were all absolutely screwed out of some years of racing due to the short-sightedness of having the FIM involved in our series here.

The FIM has a long-checkered history of some greasy back-room dealings also when it comes to the sport of motocross, so keeping the partnership with them was, in my opinion, ridiculous. The series here never needed them involved and we were worse off for it. Thank God they’re gone. Hopefully, we’ll have a sensible drug testing program and penalties, and hopefully more co-operation amongst Feld and MX Sports for the races over here, and we’ll go on our merry way.