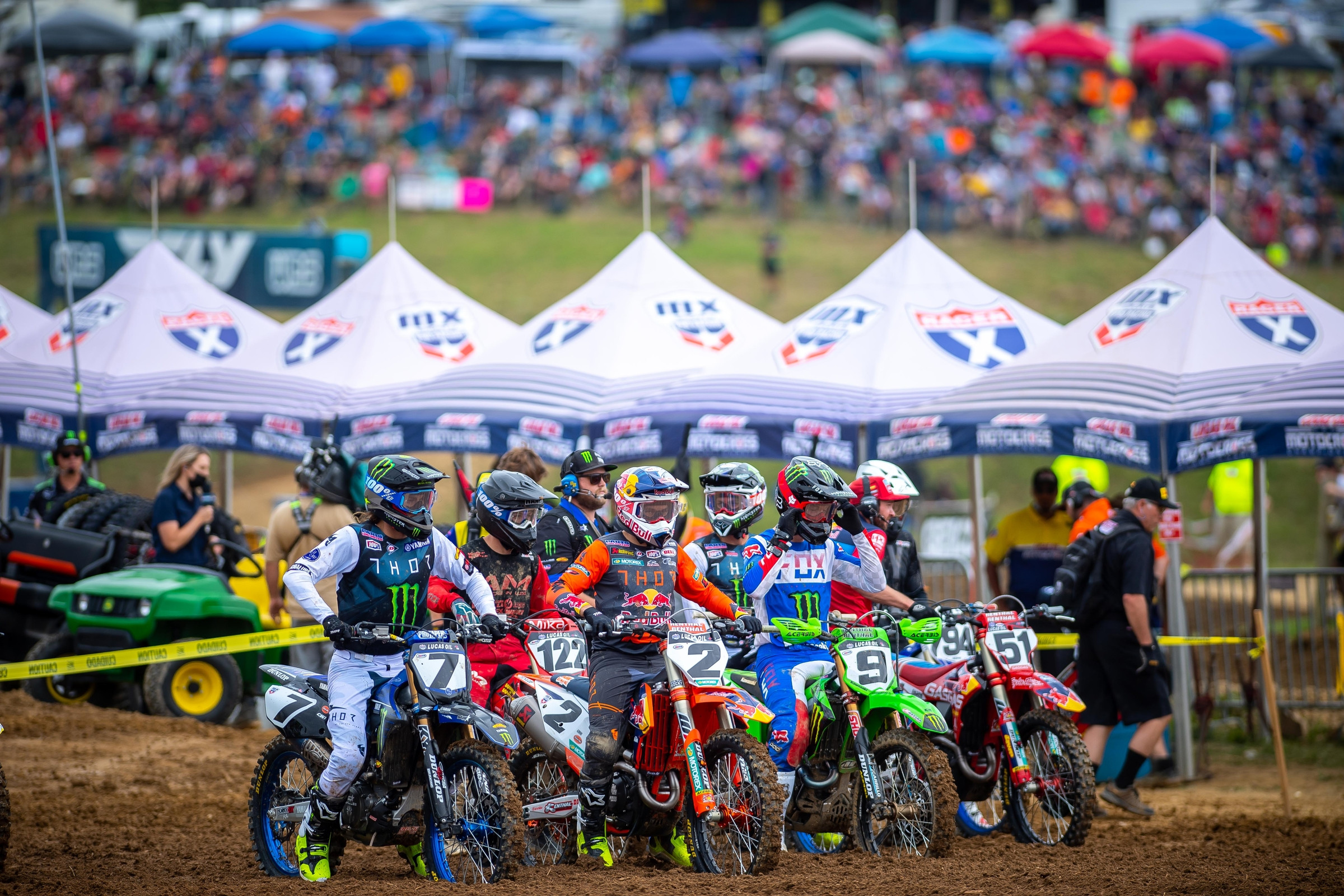 RedBuuuuuuud! After two COVID-19-effected rounds in 2020, we are back in full force this year! RedBud is easily one of the most popular rounds of the series and after a year away, I expect an all-timer this weekend. The Fourth of July date brings in visitors from far and wide for a weekend of fireworks, fun, and the Lucas Oil AMA Pro Motocross Championship.

The RedBud track is in the upper tier in terms of soil, layout, and fun factor, too. There are iconic sections all over the track, led by the most notable obstacle of the series, LaRocco’s Leap. The sand rollers are not as glamorous but if you don’t figure out your rhythm, you will be punished each and every lap. The most important aspect of going fast at RedBud is how deft you can handle the ruts. Many of the RedBud corners slow into a sharp angle, forming deep ruts that extend well past the apex of the corner. If you enter smoothly, roll through the rut with natural momentum, and apply throttle on the exit, things generally go fairly well. If you do like most and rush the process, though, the sticky ruts will make you pay for your lack of patience. These corners are where lap times are decided on the infamous RedBud course.

The one big change that I am very happy about occurred for the 2018 FIM Motocross of Nations. For years, I feared the start at RedBud. The fast, sweeping left hand corner was not for the timid. I have picked myself up out of the southern Michigan soil more than once and I am happy to see the current crop of riders face a better first corner. While some may think it favors the inside a bit too much, I have seen several good starts come from the outside, too. If you’re willing to commit and hold your momentum longer than the crew on the inside, a good start can be had from anywhere on the new start setup.

Dylan Ferrandis is approaching this series like a 450 veteran. While he is older than his rookie status would indicate, his fitness and poise have been impressive against this 450 field.

Ken Roczen has been much better than, well, pretty much everyone expected. His ability to slice through the field in the High Point National second moto is rare stuff, folks. He was making secondary lines into the fastest option, meanwhile passing multiple riders at a time.

Eli Tomac finally showed us the form that created his legacy. Whether or not he can continue to harness that intensity is yet to be seen. Still, that lap he passed Adam Cianciarulo was all time great.

Cianciarulo won the first moto (even with the late crash scare) at High Point and served notice that he will be a factor. His arm pump woes look to be the only chink in his armor thus far.

Jalek Swoll came out of absolutely nowhere to win the overall at High Point. I’m still so surprised at the burst of speed he found.

RJ Hampshire had a horrible day at High Point but could have just as easily been your overall winner. His riding deserves to be on this list even if the results don’t.

Justin Cooper rode away to an easy second moto win at High Point. That dominant form is what I haven’t seen enough of from JC32. If he can find a way to unleash that form regularly, the 250 field is in big trouble.

Even though Jett Lawrence didn’t have a superb day in Pennsylvania, his 3-2 scores are much better than what I would have guessed. He just didn’t have the breakout speed we are used to seeing. If a 3-2 is a ho-hum day, though, he is setting a high bar for consistency.

We are entering a four week stretch that will likely define this series for both fantasy and reality. For RedBud, I would stick with the tried and true strategy of exploiting those who suffered a rough prior round. There are always those riders who deserved more but whether through mechanical failure, first turn crashes, or overall bad luck, their handicap is now juicy into the next round. A few 250 riders to keep in mind based on that approach would be RJ Hampshire (could have won the overall), Jo Shimoda (first turn crash welded his bike to another), Hunter Lawrence (silly crashes), Michael Mosiman (missed the event altogether), Pierce Brown, and Nate Thrasher (if he races).

One rider that should be on everyone’s watch list is Levi Kitchen. The Monster Star Yamaha amateur prodigy is making his pro debut on the Fourth of July like every red blooded American would dream of. He may not have the hype of a Mike Alessi but maybe he should. His results have been absolutely lights out for the last year or so. I’m not saying he’s going to podium but I would expect more than a few casual fans to wonder who the heck that is on the blue bike.

In the 450’s, I think I may play my cards a bit closer. I don’t see a ton of value in the long shots this weekend. I would rather save my wilder swing for Southwick next week. I will likely go with more trusted results. That strategy will lower my ceiling but also lessens my chance of disaster. A few options with that strategy would be Christian Craig (0), Marvin Musquin (-1), Joey Savatgy (2), and Dean Wilson (4).

One last note, there will likely be a few late additions this weekend as the entry lists are finalized. Keep an eye on qualifying practice to see if anyone jumps off the page that you hadn’t previously highlighted.

Steve Matthes asks Tim Ritchie about the “sand incident of MXON 2018” about 300 times throughout the weekend.

Grant Langston wanders into Lot B around 8 p.m. on Friday night and is never seen again.

Ryan Dungey presents a mid-moto feature on the water truck lane that he pushed his 450 up in 2013. A lead change is missed, fans revolt. Chaos ensues.

Mitch Payton’s race bikes arrive at RedBud affixed with saddlebags, contents inside include a Jaws of Life for first turn pileups.

After navigating the first checkered flag challenge, Adam Cianciarulo is forced to dodge banana peels and oil slicks at RedBud.