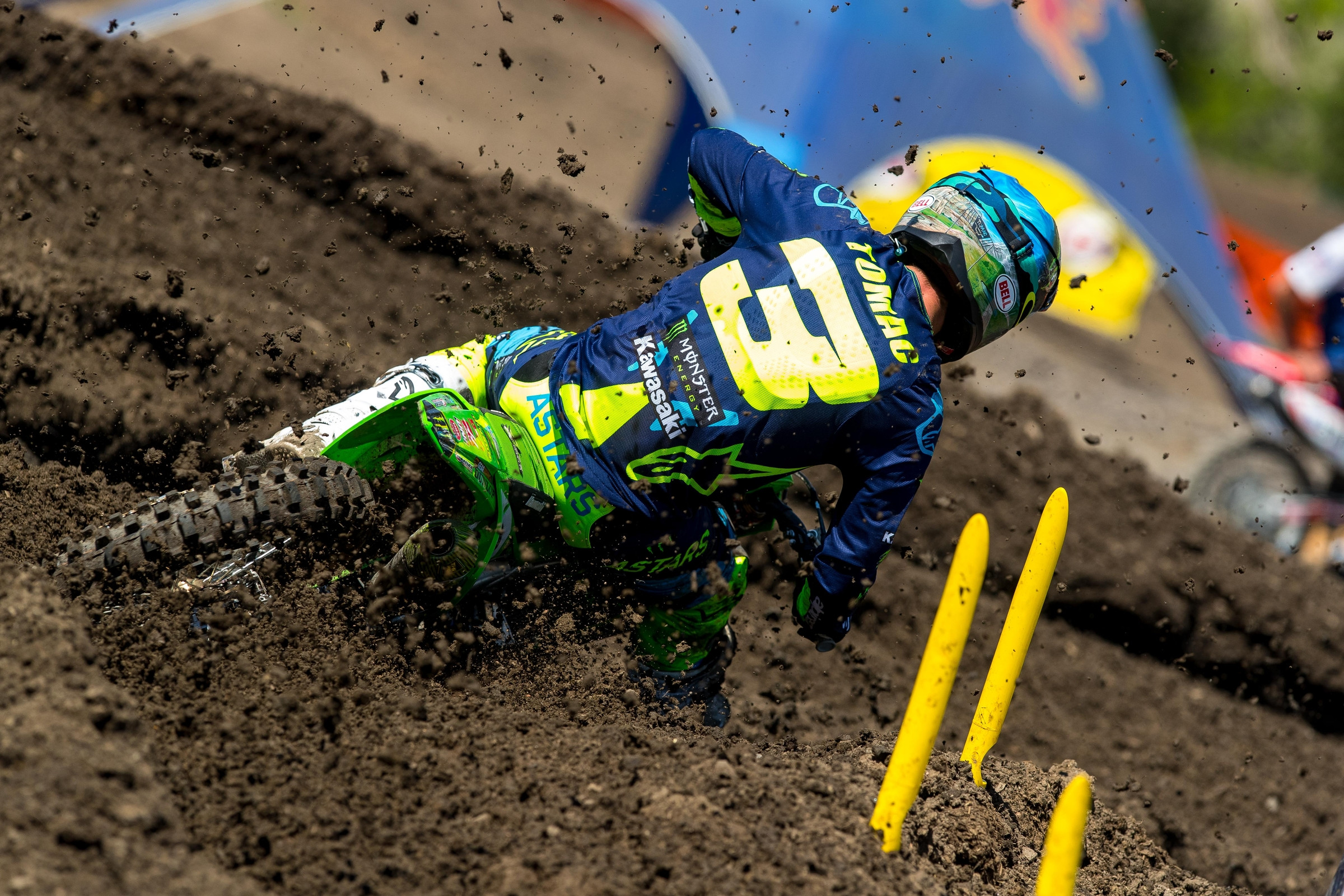 A weekend off and a switch from west to east. High Point Raceway’s serving of the third round for the Lucas Oil AMA Pro Motocross Championship presents the best-possible reset for riders unhappy with their early-season results. Anyone chasing settings or that general outdoor feeling will come into this weekend with a little more time to get it right. Plus, the opening rounds at Fox Raceway at Pala and Thunder Valley Motocross Park trended drier and more hard pack than most Lucas Oil Pro Motocross races. High Point is likely to bring the deep ruts that usually define these races…and possibly the rain that usually defines High Point. Don’t rule it out here, ever.

Okay, extra time and different conditions. Who needs a good weekend to turn their fortunes around? Here’s a few.

Eli Tomac: I mean, this has become the number-one bench racing topic at the fence line. Even more so than the guys who are winning. Ken Roczen and Dylan Ferrandis are riding well. What’s eating Eli Tomac? What’s happened? The obvious answer would center around his impending departure from Monster Energy Kawasaki at the end of the season, but history shows that shouldn’t be a problem. Consider that of the four most dominant seasons we’ve ever seen in this championship, three of them were logged by a rider leaving his team at the end of the season. Yup. Ricky Carmichael went 24-0 on a Honda in 2004 after the world already knew he was leaving for Suzuki. James Stewart went 24-0 with Kawasaki in 2008 after it was known he wasn’t returning for 2009. By the way, that’s the same team Tomac is riding for now. Also, Ken Roczen’s 2016 season is underrated because it wasn’t perfect, but he collected 20 moto wins in 24 motos on his RCH Suzuki. He had already signed to race for Team Honda the next year.

So, while it should be awkward for the rider and team in this situation, history proves what happens in the corporate meeting rooms doesn’t really impact what happens at the track. Plus, for Eli, there’s still big money on the line for every race win and championship. A good summer could easily mean seven figures in bonus money. You gotta get them while you can. Why mail it in? For Kawasaki, the best-case-scenario would actually be for Eli to do well now and set a high standard to match next year on another brand. In other words, winning has to be the goal, still, for both the rider and the team.

So why is it not happening? It’s one of the greatest mysteries. Maybe Eli wasn’t quite as good in supercross this year compared to last year, but these 9-8-11-10 scores to start the outdoor campaign are a whole level (or three) lower than that. There will be a whole lot less head scratching if the old Eli shows up at High Point and at least gets on the podium. That makes this one very critical weekend.

Marvin Musquin: So much for momentum. Marvin’s strong close to Monster Energy AMA Supercross (a win and a second, respectively) made it look like a strong start to motocross was coming. It hasn’t.

He’s gone 8-7-9-9 in the motos thus far. He could use a bounce back, and it’s possible that a weekend off and some different soil can get some pep back into Marvin’s step.

By the way, isn’t it so weird to think about Roczen winning motos while Tomac and Musquin, who have been battling him for a decade, are suddenly 40-50 seconds behind? This doesn’t really make any sense, so there’s a chance guys get back on track at High Point. Then we can just say the first four motos were too small of a sample size. Marvin and Eli certainly hope so.

Cooper Webb: (Copy/Paste) So much for momentum. Cooper’s strong close to Monster Energy Supercross (a second and a win, respectively, oh and a title!) made it look like a strong start to motocross was coming. It hasn’t.

He’s gone 5-11-8-8 in the motos thus far. Webb gets starts and then puts all of his famous race craft skills to work, but at best he can still only hold guys off for a lap or so before getting shuffled back. It’s alarming. Yes, Webb won the supercross title in 2019 and wasn’t as quick outdoors that summer, but we had reason to think that wouldn’t be the case this year. He’s admitted the supercross hangover isn’t as extreme the second time. He has a lot more time and experience with his KTM now (it’s year three) and there was more time between supercross and motocross to get ready this year. Also, he’s a former 250 Class National Motocross Champion. He spent several seasons at the front. It’s not like he’s always been terrible in motocross.

Adam Cianciarulo: You can’t really compare Adam’s start to the season to Tomac, Musquin, and Webb. Those three have been below par, speed-wise. Adam has been very, very fast and is riding well, but he’s faded late in the motos and that’s hurt his results. He admitted he doesn’t quite have the full 30 plus two in him yet, and you have to admire his honestly. So now he’s had more time to grind out some motos at home. Will he have the fitness to carry that speed to the finish this time?

Zach Osborne: Zach’s plan was to do exactly what we wrote about at the top of this story. Get through the first four motos, use the weekend off to get his injured back stronger and find more speed. Well, he jacked his back some more in Colorado, so we don’t even know his status at the moment. If he’s feeling better, he could do much better starting this weekend, but this storyline is on hold for the moment. Zach’s back or Zach is back?

Austin Forkner: To his credit, Forkner didn’t predict he would come out with guns blazing to start this outdoor campaign. After missing all of 2019 and 2020 outdoors, he said he just wanted to get better each race. Also, he thinks he will be better on eastern tracks. Well, after sitting on 7-8-13-8 finishes in the first four motos, he certainly has room for improvement. The alarming trend was watching Forkner fade late in the motos at Thunder Valley. Maybe it was the elevation? This would be a good weekend to show he’s still got the goods to be a front runner. It’s said you’re only as good as your last race, and as soon as Forkner gets up front again, the rest will be forgotten.

Colt Nichols: Nichols has actually not been bad so far. The new 250SX Eastern Regional Champion has gotten bad starts and showed strength going 9-5 in Colorado (he went 9-12 at Fox Raceway). Everyone knows the Monster Energy/Star Racing Yamahas are fast but Colt hasn’t pulled a start yet. If he does, how well can he do?

Nate Thrasher: In related news, Thrasher came into the outdoors with some hype after supercross, but we haven’t seen any fireworks in motocross. Then again, he was ultra-quiet early in supercross, too, only to bust out some wins out of nowhere. Could that be in the cards soon? Like his teammate Nichols, a start would help.