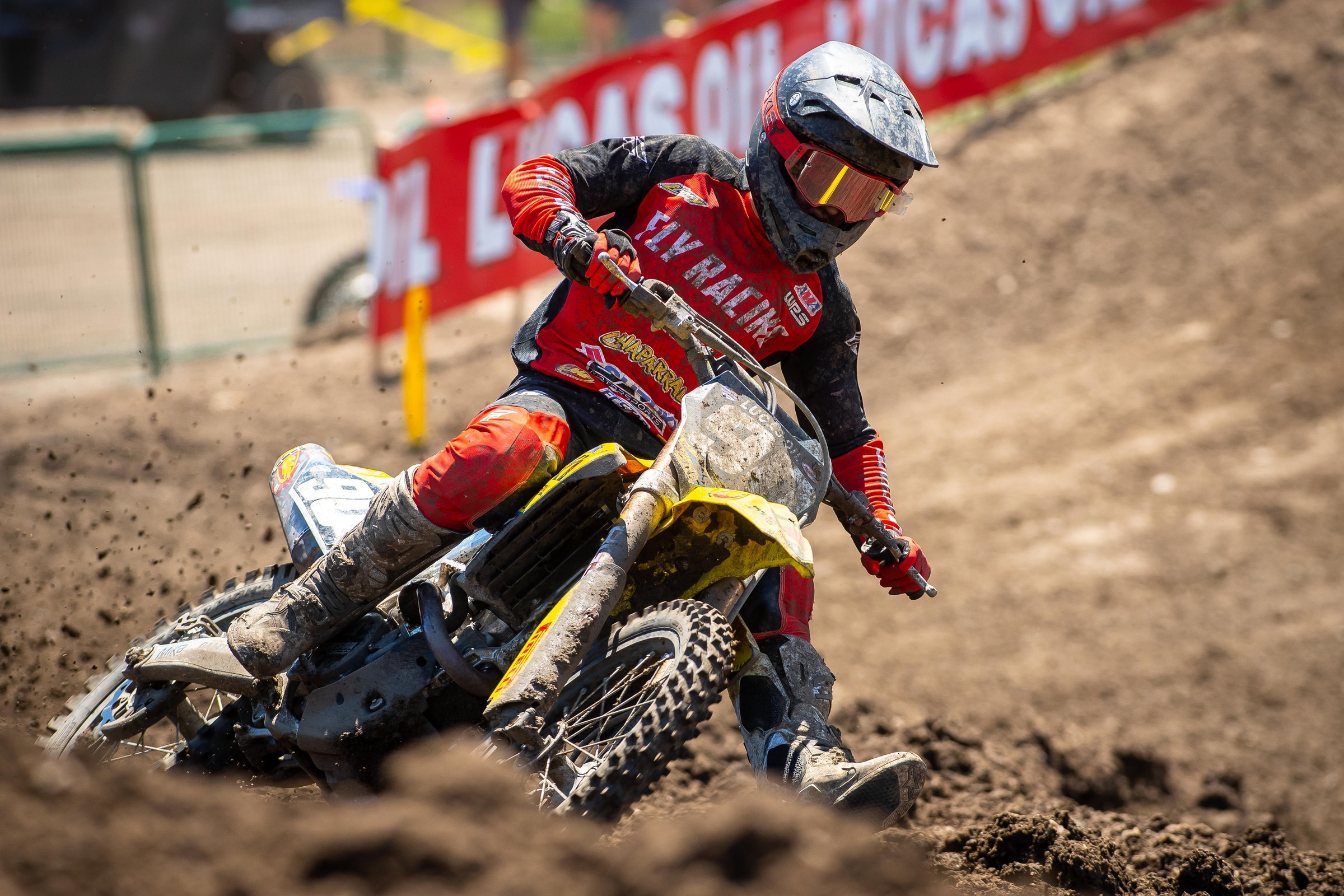 California native Dilan Schwartz put on a breakout ride this past weekend during the Thunder Valley National going 8-12 for a ninth overall in the 250 Class aboard his Bar-X/Chaparral/Ecstar Suzuki RM-Z250. The team is based out of Temecula, California, and is one of only two full time Suzuki teams in the paddock due to JGRMX closing its doors late last year. The young rider from Alpine, California, spent most of his amateur racing days with Team Green Kawasaki until making the switch to Bar-X in early 2018. In 2020, Dilan threw down some impressive rides at Loretta Lynn Ranch in the 250A class battling with notables such as Rockstar Energy Husqvarna’s Stilez Robertson and then-Yamaha rider Mason Gonzales.

Fast forward to 2021, Schwartz raced a majority of the Monster Energy AMA Supercross Championship while only missing a few rounds due to a minor injury. With trainer Randy Lawrence by his side, the young Suzuki rider looked to the Lucas Oil AMA Pro Motocross Championship to really leave his mark in the industry. “As soon as I saw how Dilan did in practice, I knew it was going to be a good day,” said Lawrence. “He’s been working hard.”

With an unchanged RM-Z250, Dilan put his Bar-X ride to work and turned some heads while doing so. Could he be a beacon of hope for the RM Army? Here’s what the young rider had to say.

Racer X: Dilan, how is your 2021 Pro Motocross season going so far?
Dilan Schwartz: The first round was a little tough. In the first moto, about halfway through, my shock ended up breaking so I had to ride through that, but I ended up 18th so fortunately I was able to get some points. In the second moto my bike blew up, so it was definitely a tough first weekend. I knew I could do a lot better than that and in Thunder Valley I came out eighth in the first moto and 12th in the second moto. I'm really pumped with those finishes and I think I can really start shooting for top tens each race and just improve from there.

Did the elevation at Thunder Valley affect your weekend at all?
Obviously in Thunder Valley the elevation is really high and everyone's bikes are a little bit slower. Unfortunately, I did get a little bit of elevation sickness so the second moto was a little tough for me. When you're running up front like that, you don't want to give it up, so you fight until the end. On the plus side my bike stayed strong all day with zero problems, so I'm pumped with that.

How long have you been with the Bar-X Motorsports team?
I've been with the team since 2018, so three years now. I know this bike really well and we have the bike set up exactly how I like it. We still fine tune things all the time to try to improve the bike, but I'm really excited to get the season going again after the break and really see how everything plays out.

Do you plan on heading east once the series picks up again, or are you going to stay based in California?
I plan on staying here in California and just flying to the races. I train with Randy Lawrence out here and I really enjoy his program.

What's a regular training week like for you with Randy?
I do some kind of training every day. I usually ride three days a week on Monday, Wednesday, and Thursday, but it varies depending on when we fly out for the race. I also ride the bicycle two days a week and go to the gym two days as well. I definitely have a packed schedule, but I really enjoy it and I'm looking forward to seeing how it pays off.

Was it tough for you to adjust to the pace of Pro Motocross compared to the 250A class?
Last year I only did a couple of outdoors after Loretta’s, and just going from amateur to pro pace was definitely a lot different. I wasn't really expecting it. Pro pace is literally everything you have for 35 minutes with everyone going all out the whole time. That leaves no room to make a mistake or mess up at all because someone will be right behind you to take your spot. As an amateur you get a shorter moto, and the pace is a little bit slower. The biggest thing for me was just to get used to that and have the fitness to stay there.

What can we expect to see from you for the remainder of the season?
I really just want to get out there and do my best but, I want to get at least 15th or better. I’m aiming for top ten as my goal. I believe I have the speed to do it, but if worse comes to worst I will take a top 15.