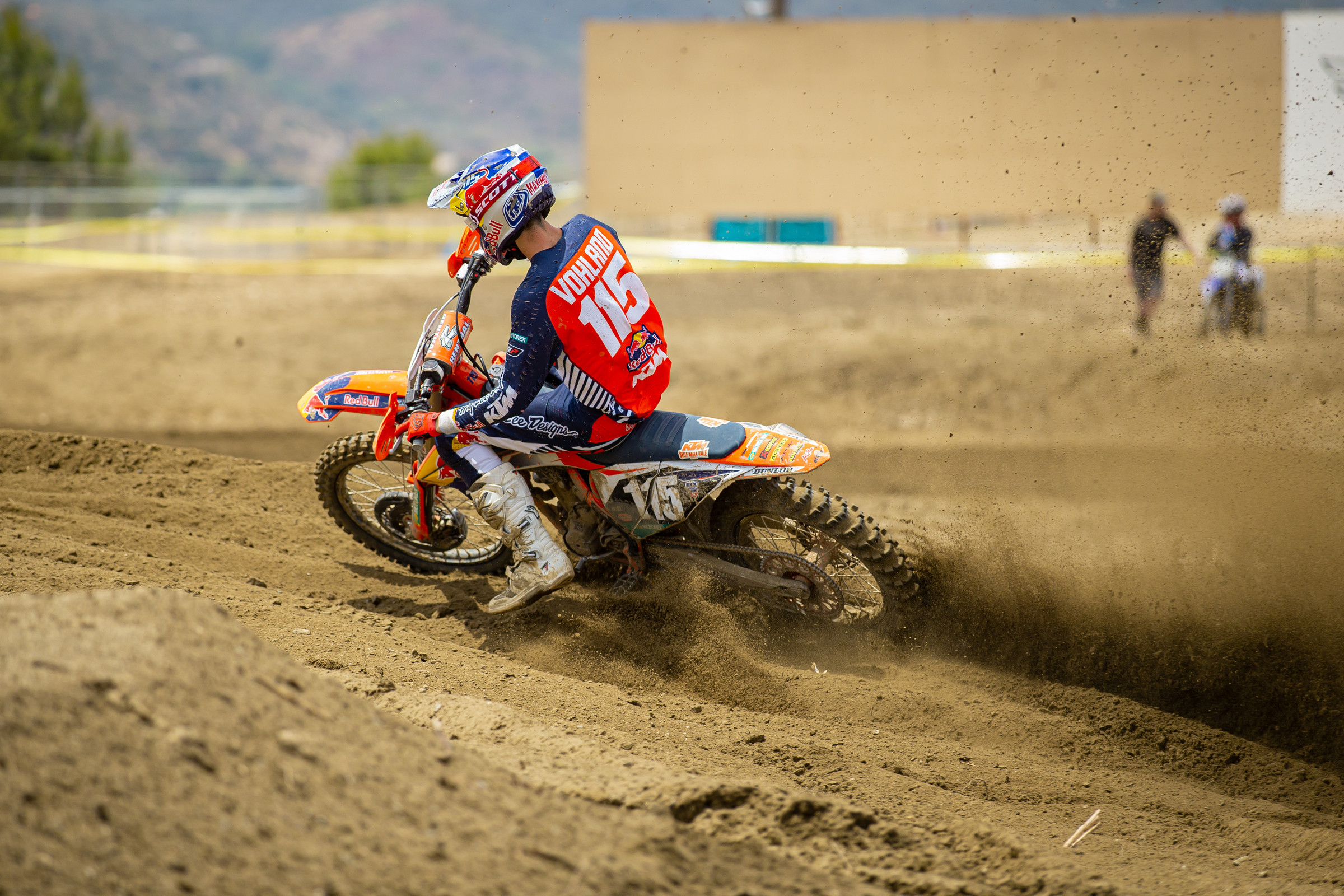 The first round of the 2021 Lucas Oil AMA Pro Motocross Championship is still four days away, but riders might be more prepared for this opening round than ever. After an extra two weekends (compared to the usual schedule) between Monster Energy AMA Supercross and the start of Pro Motocross, Fox Raceway at Pala opened its gates to a large contingent of riders on Tuesday for a lengthy media day session. It’s unusual to have a press day so early in the week, but running the opener in Southern California offers a unique opportunity since nearly every rider and team already works in the area. So, what did we learn from yesterday’s action?

For starters, the track is different. It’s not as large of a change as was expected, however, as only the section from the finish line jump back to the starting gates has actually changed in shape. Instead of just four corners after the finish, it has now tightened up significantly to squeeze six turns in with very small straight aways from corner to corner. The change already showed on the stopwatch as riders seemed to continually land on the 2:15 mark instead of the 1:53 we saw from fastest qualifier Chase Sexton last year.

The rest of the track may have the same shape from 2020, but there are a few differences that appear to have slowed the pace. The steep uphill in the back of the track is now preceded by an off-camber corner with much of the uphill and downhill sections made up of deep loam. Riders took some time to adapt to the soft conditions on the hills which were much different than the harder packed flat area of the track with several riders going off on a tricky step down. The step down was the second downhill after the step up that Adam Cianciarulo crashed on last year and riders were launching from the top of the hill almost down to the bottom and just landing on a small knuckle. Aaron Plessinger crashed at the bottom of the hill while swapping after landing and Marvin Musquin, Max Anstie, and Dylan Ferrandis all couldn’t quite get stopped for the corner on separate occasions after making the jump. Track officials were seen going around to the riders between sessions and asking thoughts on the track so there still may be a few more changes come Saturday’s action.

Watch some raw riding footage of the press day below:

As for the actual riding, just about every single one of the factory riders were there. Perhaps the most notable absentee was that of Manluk/Rock River Yamaha/Merge Racing’s Alex Martin. No indication why he may have missed out though. The rest of the 250 class contingent appeared to be out in full force. Monster Energy/Star Yamaha Racing’s Jeremy Martin is returning to action after his shoulder dislocation at Orlando 2 and he looked right at home. Despite rumors of a wrist injury as well, J-Mart looked particularly comfortable at sprint speed and was setting times comparable to the 450 class riders. Monster Energy/Pro Circuit Kawasaki’s Austin Forkner was also back in action and looked more reserved throughout the day as he works to get back up to speed having not raced since late January.

The Lawrence brothers of Hunter and Jett seemed to keep finding each other on the track. They pushed each other around a bit, but they seemed to spend most of the session trying out different lines. Fresh off their 250SX championships, Justin Cooper and Colt Nichols both looked comfortable throughout the day, with Cooper actually working on riding behind riders at times to see if alternate lines could work for passing. The Troy Lee Designs/Red Bull/GasGas Factory Racing teammates of Michael Mosiman and Pierce Brown seemed to have the wall jump double before the finish line figured out best. Both riders were staying much lower on it by launching the roller beforehand and just clipping the top of the double takeoff. The line does have its downfall because the rougher the track was got, the less lift they would get, which made it harder to continue doing it consistently. Red Bull KTM Factory Racing’s Max Vohland was back in action as well and was quick to get right out front in both sessions. We also saw the return of Rockstar Energy Husqvarna’s RJ Hampshire and he looked right in the mix in terms of pace. The last thing we saw in the 250 class was Cameron McAdoo somehow ending up on the track by himself at the end of the session. He was the first 250 rider we saw all day that hucked the large step down while he was by himself on that last lap. Only Wackers!

The 450 class was essentially a battle to see who could run the most 2:15s. I timed Eli Tomac, Adam Cianciarulo, Zach Osborne, Cooper Webb, Chase Sexton, and Jason Anderson in the second session and got the same result with all of them: 2:15! I put Ken Roczen on the clock twice, once at the beginning of the session and once at the end, but both times he was sub-2:20 and appeared to be more focused on working from section to section than he was on putting a lap in.

Perhaps the most notable observation was Cooper Webb using the entire second 30-minute session to put in a moto. Everyone else would do something like three to five laps and then pull in and change something. Webb just kept putting in lap after lap and was one of the few guys still circulating late in the session. That might explain why Adam Cianciarulo started behind him and Zach Osborne in that session and was able to catch and pass both, as Cianciarulo then took a few slow laps mid-session.

Eli Tomac looked a lot like his old self most of the day. While he may still have some things to work on with the bike, he appeared very in control when he was pushing the pace, which he tried on several occasions. Looks can be deceiving, but Tomac sure looked good.

You may also notice some shots or video of #177 on a KTM in the coming days. That’s Alessandro Lupino, one of Italy’s top riders. Lupino is racing the first two nationals of the year before heading back for GPs as a way of checking off a bucket list item of racing Pro Motocross in the USA. He looked solid as well and wasn’t shy about stepping in line behind Cooper Webb and Adam Cianciarulo on separate occasions to work on pace matching.

To summarize the day, a lot of guys looked fast. When the track was fresh, it seemed others were attacking more to get a feel, but a lot of the sprint laps appeared to roll out in the second sessions when the track was rougher. If anything, we learned that this track should be more challenging than last year’s version and the ability to remain efficient with energy could be huge come Saturday—which feels like it’s so far away!