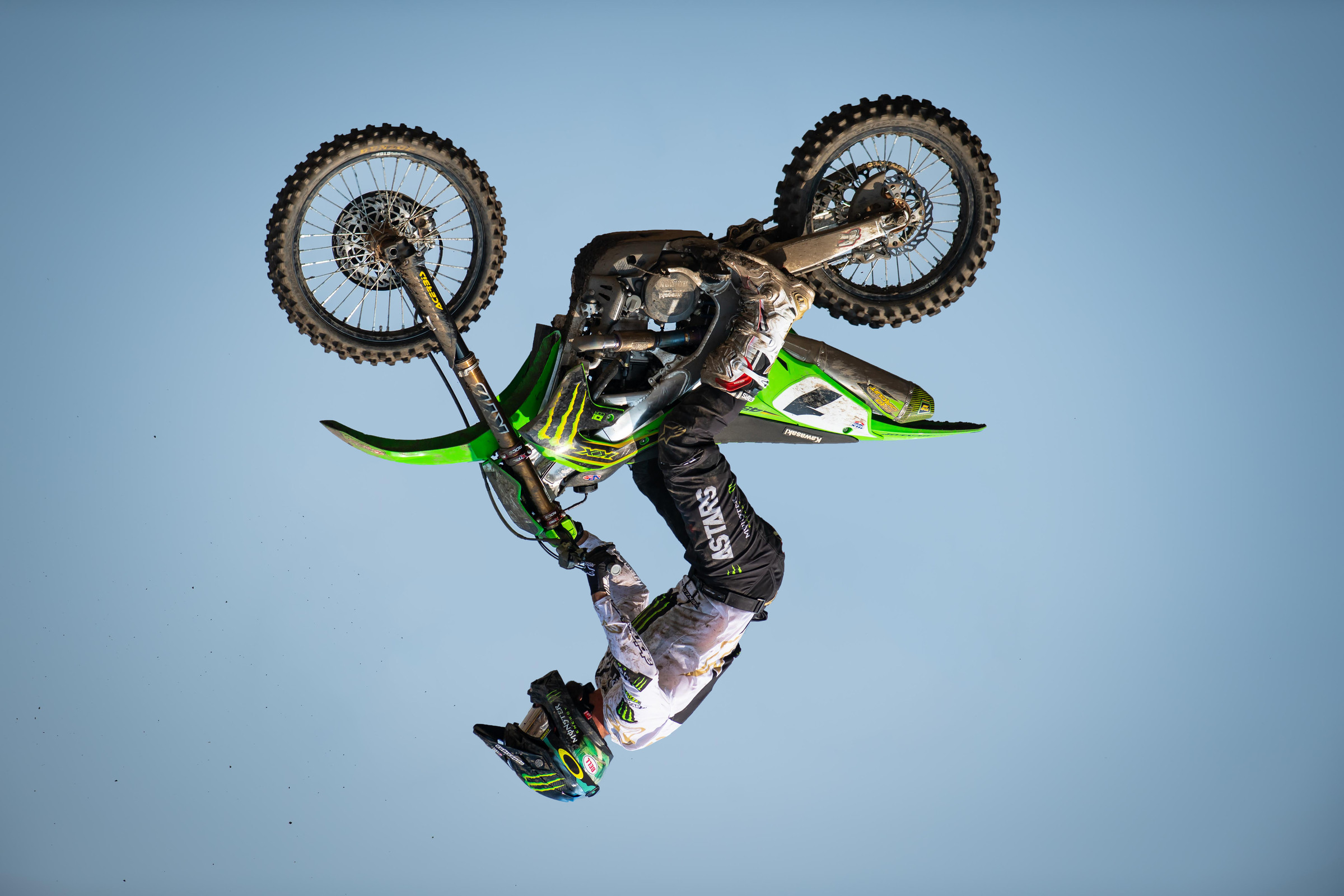 The List April Fools Jokes We Want to See

Here at Racer X, we got too close to the flame on April Fool’s Day a few times. There was the year we announced Ricky Carmichael would race both classes of the AMA National Motocross Series on a Honda CRF450R and CRF250R. Apparently, April Fools isn’t a thing they understand in Japan? There was the year we went around telling everyone at a supercross that a tear off ban was about to go into effect. There was the year we helped Stefan Everts announce he was coming to race in the U.S. We sent a few too many shockwaves through the industry after these, so we’ve backed it down.

Doesn’t mean we don’t have ideas. Here are some things we think some riders and brands could have done for April Fools to get people rolling. Or maybe we could have faked that we did it. But we didn’t. We’re just pretending here, right?

Rising From the Dungeon with Dunge

Suzuki’s long-awaited return to the front ranks won’t take long now, as they’ve re-recruited one of their best recruits, Ryan Dungey, as Team Manager for its revamped factory effort. Dungey will be downing more RD Coffee than ever (including his new brew, Yellow Edition) with the hours he’s prepared to put in here, with Suzuki going back to its old California factory race shop. First recruit for Dunge? Liam Everts, which brings his dad Stefan back into the Suzuki fold that also once employed his dad, Harry. Suzuki has also signed Liam’s son, scheduled to be born within the next 15 years, to a supercross contract for the 2050 season.

Eli Tomac wasn’t kidding when he said he’s enjoying riding his motorcycle more than ever! During the two-weekend break in Monster Energy AMA Supercross, the Monster Energy Kawasaki rider showed up at Travis Pastrana’s Maryland compound to work on his freestyle game. Before the first week was up, the normally mild-mannered Eli had perfected the first triple backflip to dirt, the ET3. Is there anything he can’t do?

In a bit of a “greatest hits” package or a “mash up” as the kids would say, The KTM Group takes the best pieces and technology from all three of its dirt bike lines to create the Factory KGasVarna Rock Bull Edition, glistening in red, orange, and white, with a revolutionary “Red Bull on one side Rockstar on the other” graphics package. So. Much. Energy!

Due to the delay in the 2021 MXGP schedule, the stars of the Grand Prix scene have announced they will head U.S. to get in some gate drops—at the Lucas Oil AMA Pro Motocross Championship opener at Fox Raceway on May 29. Good luck social distancing in the pits when you double the number of factory riders! Look this one up under #deepfield

Yup. A couple more 450 prospects, 250 race winners and some more amateur kids. Maybe a guy or two from Europe. And Australia. Whatever. Bobby wants you!

Eli really is having fun! Ready to show the SoCal bros what his new-found freestyle tricks are all about, Eli hits the hills and launches some massive hits to a punk rock sound track. You didn’t expect him to see Eli on The Slayground halfpipe, and you definitely didn’t expect to see him in Metal Mulisha gear with spikes attached to his Alpinestars chest pro. After rolling through the SoCal “Party in Temecula” scene, Eli goes back to the grind to log some motos in Lake Havasu. On his new party boat! He’s gone wild!

GasGas, ironically, already makes an electric dirt bike with the MC E-5, which is the GasGas logo’ed version of the KTM/Husqvarna electric mini. Yup, an electric bike with the words GasGas right on the shrouds! To reverse that irony, GasGas introduces the 2020 ElectricElectric, named not for its electric powerplant, but for the high-tech electronic fuel-injection system connected to its 250 two-stroke engine, designed to provide a manageable “electric” feeling power delivery. Get on the volts!

Tired of being criticized for appearing to not take his racing seriously enough, Jason Anderson and company change their tagline from “fried” to “grilled.” Lose the fat, win the race! The new low-carb, gluten free, lactose intolerant version of Team Fried uses social media to promote healthy lifestyle and fitness tips. Move over George Forman, Jason Anderson is ready to grill up some likes!

Chisholm Fails to Make the Main

Failing to capitalize on his blazing one-lap qualifying speed, Kyle Chisholm breaks the hearts of fantasy players everywhere by holeshotting his heat race only to go four and a half on his attempted quint through a rhythm lane. Chizz, you don’t need to do that when you’re carrying an eight second lead on lap three! The LCQ devolves into more chaos when the nerves get to Kyle, who gets the lead but then suffers from arm pump, tip overs and even stalls his bike while trying to hold on for a transfer spot. Chizz is left to watch the race from the stands, which could be beneficial. Clearly the “wild child” of the 450 bunch needs to study up on his race craft.

With so much time to blow off steam between races, Tomac is seen Hanging Three Plus Seven in the Pacific Ocean. He’s not the only one finding new ways to keep the season fresh.

With Eli taking an extended vacation, Ken Roczen has plenty of room to roam at the Tomac Ranch in Colorado. From milking cows to bailing the fields, Kenny is up with the roosters and down for some corn shucking.

Roczen set the tone at supercross press conferences by rocking a suit, but after a year without an actual in-person presser, no one knows when the next style splash will come from, or when. That’s why it’s surprising to see Aaron Plessinger on social media getting fitted for a $10,000 custom suit. “Do it for Dolce & Gabbana!” adds AP7.

After chipping his tooth on the handlebars at Daytona, and smashing his face in the sand in Arlington, Sexton is seen with his helmet off during a practice session at the Stewart Compound. The secret to his fast 450 qualifying laps? Cyborg Sexton is not human. He might have bashed his face, but don’t worry…he’ll be back.