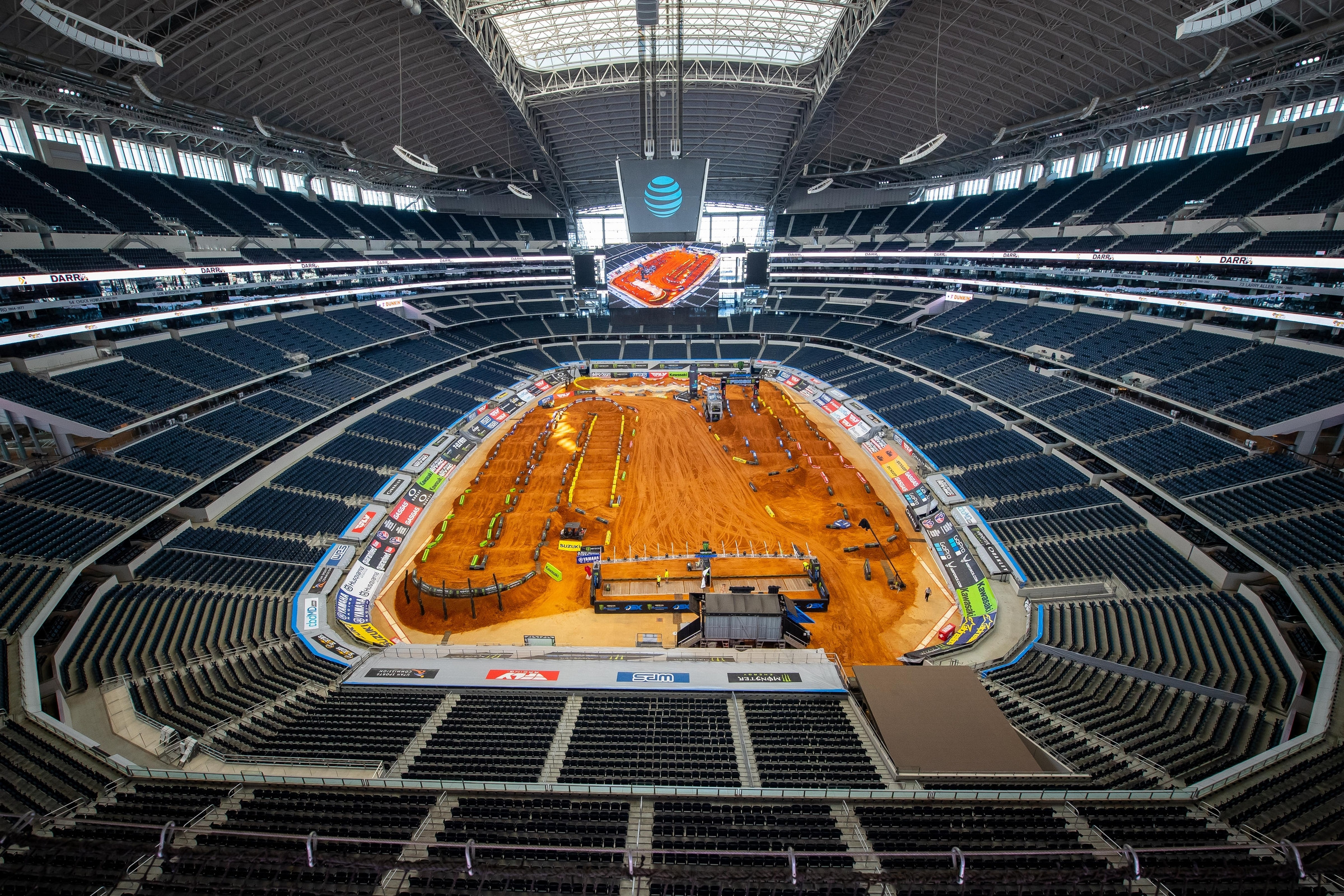 Arlington 3 everyone! I wasn’t there so it’s always hard to type this column out the way I like to when you can only see what the TV producers decide to show you, but I’ll try my best so away we go!

We had ourselves a race track at Arlington 3, huh? Some big jumps (we know a quad is when you jump four, what the hell do we call it when the riders go five?), good sized whoops and a sand section that, although to me looked pretty basic, gave a lot of riders some fits (narrator: maybe it wasn’t basic, Steve) and it was a good, tough track. Look, I’ve been writing this column for 13 years and I’ll just repeat myself here: I love it when we have tracks that have obstacles that not everyone can do. That and big whoops, and I’m happy. Oh and mid 50’s lap times. Then I’ll be happy.

What more can you say about Cooper Webb’s race? When you’re on a roll, you’re on a roll and he’s on one right now. It was a rough heat race for Webb where he didn’t look great through the whoops and then was taken down by Chase Sexton. That gave him a bad gate pick for the main event (even though he was next to Roczen, I’m sure the rut in front of the gate was bad- hence why it wasn’t taken) and Roczen was checking out. Heck, I was thinking Webb was gonna do great just to get a second here and only lose three points.

But nope, we saw what happened. Webb made it work yet again. Crappy qualifying practices, crashes in those where he slams his face into a whoop, heat race crashes—whatever it is, Coop’s mental game and ability to rise up when he needs to is top notch. From my experience Jeff Stanton and Ricky Carmichael were like that also. Webb slowly reeled in Roczen, he was better in the sand and that big rhythm, caught Kenny twice, and the second time he made it stick. Unbelievable, right? What a ride. It’s not over by any means, but boy, does this thing feel over.

Ken Roczen had a track that rewarded technical prowess, he had the start, and he had the lead. He had it all lined up for a perfect wire-to-wire win. In my opinion, Roczen HAD to win last night when he was presented with all of the above and he couldn’t get it done. He also needed to get a bit nastier with Webb in a couple of those turns but instead, he chose not to. In fact in one of the corners, he looked to have hesitated thinking Webb was coming in. I know Roczen is not that type of guy but holy shit, I guarantee you Webb KNOWS he’s got Roczen covered late in the races.

I know Roczen’s putting on a brave face and saying all the right things but he’s got to be bummed about what’s been going on. Webb’s been absolutely crushing it and Roczen seems powerless to stop this. From 16 points up to 15 down in just six races. I thought we’d see some more fight from Kenny at Arlington 3, and I bet his team did also. I mean can we run Webb at least a LITTLE high in a turn?

I think Roczen was a bit fortunate that Eli Tomac hit a Tuff Block also because the defending champ was on it and charging. As it was though, Eli had to battle a very spicy Justin Barcia for the last podium spot and he got it back. Barcia was right there the whole race and he’s got to be a bit frustrated to get two fourths in a row. He’s probably, like, “The leader is RIGHT THERE and all I get is some purse money. No trophy, no bonus money, no interview, nothing!”

Here’s something I love about dirt bike racing: A million variables can change, years, bikes, tracks, age etc, but there’s Tomac and Barcia having a good scrap again for about the 76544th time.

I spoke to someone close to the Tomacs and they were telling me that Eli’s starts are mostly confidence related. Jeremy McGrath at Arlington 2 on Race Day Live was all but screaming that he has no idea why Tomac lines up where he does when his starts aren’t on point. This person was saying that when Eli is confident in his riding and motorcycle and takes the inside gates, he can get starts and when he’s not, he won’t. Well, the last two races he must be feeling good because his starts are back and he’s putting himself in a hell of a better position to do some damage than in the earlier races.

The last couple of races we’ve seen Webb, Roczen, Tomac, and Barcia start to separate themselves from the other guys here. Yeah, the starts help for sure but we’ve seen this stuff before. The grind of the season starts to get guys down, the riders in the chase for podiums start to get stronger, the other guys start crashing and we see a bit of separation in the series. I’d look for this trend to continue when we pick back up in the ATL.

In short, this championship is up for grabs with four rounds to go. Let’s break down the title contenders here for a second.

Justin Cooper: he’s the favorite right now. He’s got more wins and podiums than anyone else in the class. If he wins it will be his first pro title, a validation for kids staying in school, and also for the riders who don’t absolutely tear up the amateur ranks.

Cameron McAdoo: What a story it would be for RAM IT to win the title. He’s been a fill-in rider twice, he barely got the Monster Energy/Pro Circuit Kawasaki ride last year, he drove Christian Craig’s motorhome for a bit when he had no ride, he was discovered by Tony Alessi, and he was so desperate for some money one time I flew him out to Red Bull Straight Rhythm to race a two-stroke for PulpMX after Phil Nicoletti turned me down and recommended Cam. We didn’t RAM IT at all but I did develop a relationship with McAdoo because he was cool, respectful, and tries very, very, very hard. Also, BTW, he and Cooper were NOT highly paid amateur riders for years ICYWW.

Hunter Lawrence: It would be awesome for Hunter to win. He told us last week on the PulpMX Show that he thought about quitting after he got hurt again last summer. He’s been better in SX than we thought after his not-so-hot SX debut at SLC last year. He’s a very friendly guy who’s raced all over the world before he came here. Also, his brother THE JETT gets most of the hype, so it’d be cool for “Huntah” to make it happen before THE JETT, right?

Seth Hammaker: Okay, yeah he’s not going to do it because he’s too many points back but he’s got a win, he’s got another podium and speed-wise, he’s right there. What a story it would be if he won. A lot like Trey Canard’s debut, right? Overshadowed a bit in amateurs but got a good ride with a team that believed in him and he made the most of it.

Another great race for Jalek Swoll who, and you have NO IDEA how much this pains me, continues to make strides this year after joining the Baker’s Factory program.

I didn’t go to the race so I have no comment about Malcolm Stewart or Dylan Ferrandis’ races. Both guys did well for sure but that’s about all I got.

Don’t look now but Nate Thrasher and Jarrett Frye on the Monster Energy/Star Yamaha Racing team are coming around! Kind of. Thrasher was fast all day and had a solid night. Frye rebounded from a bad Arlington 2 where he didn’t make the main and scored a career-best ride.

I did a podcast with “Zombie” Chris Blose a couple weeks ago in which he told how he doesn’t always get to ride supercross during the week due to lack of tracks so he just takes his bike out (with SX suspension) to the desert and rides around out there. Zombie’s gonna Zombie, I suppose.

Chase Sexton and Marvin Musquin both crashing out of a race is odd, right? This has been a weird year in so many ways and one of them is the fact that Marvin Musquin’s results have been so up and down.

Good ride for Broc Tickle here, he’s had a rough couple of weeks but an 11th is solid for sure.

It might be time for Jordon Smith to say “no mas” right about now. Then again he might not have a choice as his shoulder came out in yet another crash for Smith. He’s very talented but he can’t stay on two wheels. Smith’s a good dude but man, it’s going rough for him right now.

Props to Martin Davalos for continuing to race last night after a dirty crash in practice that he put on his Instagram. Wow, it was bad.

I feel like we don’t make enough mention of Max Anstie and how solid he’s been since coming into the series back around Orlando. He’s made every main this year, he hasn’t yard-saled nearly as much as you might expect from someone jumping into this 450SX field (BREAKING NEWS BY THE WAY: we finally got David Vuillemin to admit on the PulpMX Show that 2021 is indeed a deep field!), and racing supercross for the first time in seven years or whatever. Max has been Twisting it (get it?) and has been quietly impressive.

Hunter Lawrence was third and looking good when he made a mistake late in the race and sent it over a berm and INTO THE NETS. Yep, the nets saved another rider from possible injury, the nets worked again. All those people who doubted my idea of nets five years ago have been proven wrong. The only problem I see with the nets is, WE NEED MORE NETS. They work! Put them everywhere!

Wonder if anyone will listen to me about the Tuff Blox? Or are we still powerless to stop the three-pound bricks from rolling out onto the track and taking down riders? If anyone wants the “We need nets” inventor guy to tell them that if they spend eight bucks for every two Tuff Blox, we can stop this.

Yet again, Kyle Chisholm Chizzed. That is all.

Got anything on your mind about Arlington 3 or anything else at all? Shoot me an email at matthes@racerxonline.com and we can chat about that or something else.