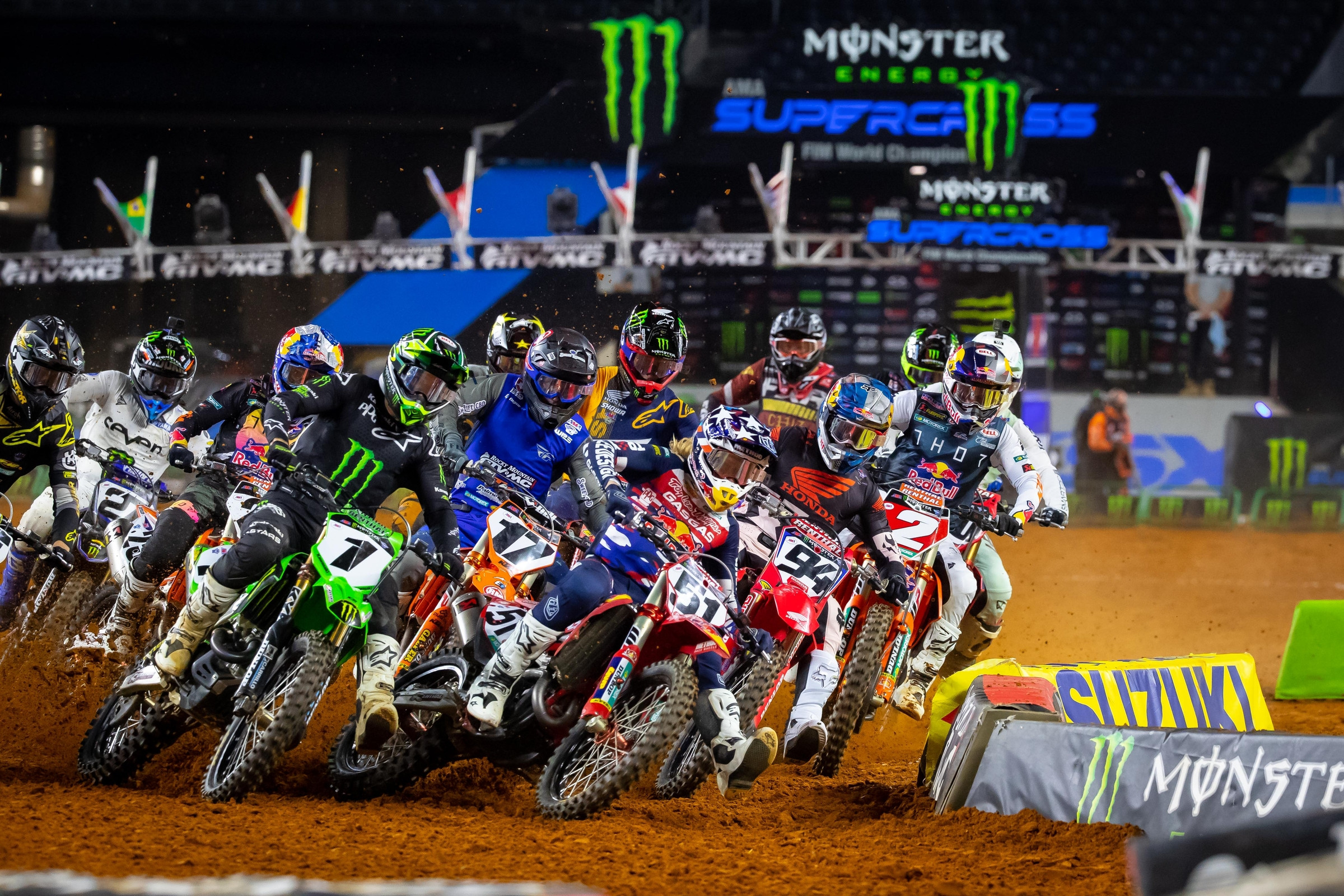 The 12th round of Monster Energy AMA Supercross provided an awesome race track and dramatic racing in the 450 class. Cooper Webb dug into his bag of tricks to get this race win and take further control of the series Meanwhile, Justin Cooper became the first two-time winner in the 250SX West Region. We fired off questions to long-time pro Jason Thomas to pick his brain on everything Arlington 3.

OMG the track! Spray it with some pump, please.

I was a bit critical of last week’s track (Tuesday) but I felt that it was warranted. I know that the Dirt Wurx crew has talented designers and dirt shapers. I have seen how effective they can be. So, when I saw a subpar track, I was disappointed. Flash forward a few days later to the final Arlington round and we had a home run. This was everything I could have asked for. The rhythm sections were difficult, imaginative, and well conceived. There was a way for the privateers with lesser skill to safely traverse each section, but more importantly, there were multiple ways for the sport’s elite to display their talent. There were triples, quads and even a way to go for the rarely seen quintuple.

The whoops were challenging and had a nice bowl berm preceding them to build speed. Cooper Webb was able to utilize a combination of jumping them and blitzing them while his rivals stuck to blitzing. We didn’t see huge crashes but we did see riders use all of their tools. Mission accomplished.

There was also a tricky sand section just before the finish line that might have taken the biggest toll. This was a slow, plodding set of four single jumps built entirely of sand. They changed significantly during the main event and we saw crashes mount. Marvin Musquin, Tyler Bowers, Brandon Hartranft, and Chase Sexton were all casualties of this sand section. While that may seem a negative, I don’t believe that to be true. This sport is meant to be difficult. While I never want to see anyone injured (obviously), I do want to see riders pushed to their limits. Plus, we saw crashes in the sand, not in those whoops or big rhythms. I want challenging tracks that force riders to respect the tracks and rethink their approach. This Arlington 3 track delivered on that front.

After that heat race, how doubtful were you that Cooper Webb could come back and win the main? We've seen him do this before, but he was really on the ropes.

I was most concerned about how the start would effect his race. That heat race incident with Sexton forced a worse gate pick than he has seen in recent weeks. With that poor pick, he was forced into a gate with a less-than-ideal exit rut on the other side of the grate/gate. That rut was the biggest factor in how his race would go in my opinion. My concern was that the rut would lead to choppy acceleration and the surrounding riders would shuffle him backwards. In typical Webb fashion, though, he was able to maneuver through it without issue. He wasn’t able to beat Roczen to the first corner because Roczen had his choice of gates and more importantly, best exit rut. Roczen’s rear tire could drive forward uninterrupted and his holeshot was indicative of that. Much to Roczen’s dismay, though, Webb would tuck just inside him and nearly pass him down the first straightaway. It was a pivotal moment of the race for Webb and gave him a chance to win. Had he struggled over the gate, which I fully expected, he would have been relegated to a poor start and subsequently stuck in traffic. If Webb was asked to come from 10th place in that main event, I believe you would have seen the #94 standing on the top step of the podium. The start is always important but the first few feet of Arlington 3 was more critical than normal.

Do you think Sexton knocked Webb down on purpose in the heat or was that just racing?

It was an aggressive pass but I don’t believe the intent was to leave anyone on the ground. Sexton didn’t intend contact, in my opinion. I think the biggest factor was Webb being surprised at Sexton’s arrival. Had Webb known Sexton was there, he could have checked up and given room. Instead, he pushed high into the berm and with the Sexton’s bike squarely in the apex, the delay forced Webb into a no-win situation. It wasn’t dirty, just bad timing.

Webb isn’t usually caught off guard in these situations so I am guessing that the key here was that Sexton’s entry into the turn was strictly braking. While in the air and entry to that corner, he wouldn’t have used the throttle for a second or two, only trying to slow down for the berm. That lack of throttle (see: noise) would set up a stealth move to the inside. That silence was a critical factor. The lead rider is always using sound as his indicator for where his competitor lurks. Webb heard nothing in this moment, so he thought the inside was free and clear. Meanwhile, Sexton was eyeing up a block pass mid-air to that exact spot. Two seconds later, Webb sees red in multiple ways and is left picking up his KTM. Tricky situation but again, not dirty.

Roczen is a world-class sprinter but late-race heroics have never been his specialty. Talk about fast twitch/slow twitch athletes and the strengths and weaknesses of each.

I believe this to be a very underreported aspect in racing. For track and field, this is widely discussed. Usain Bolt and Steve Prefontaine are two of the most heralded track and field athletes ever. Their strengths were very different, though. Bolt is suited to short, explosive movement. His ability to reach maximum speed from a stop has made him a millionaire. For Prefontaine, he thrived on endurance tests. He was able to reach maximum energy exertion and hold it for long periods, setting records across the board for long distance running.

For riders like Webb, Roczen, and Webb, I believe some of the traits are also prevalent. Roczen seems to have more of the Usain Bolt type fast twitch talent. His speed in the first five laps of a race are amongst the best we have ever seen. Most simply can’t reach that level that quickly. In contrast, Eli Tomac seems to need a few laps to prime the pump. Ryan Dungey was similar in this aspect, too. They weren’t as lethal in the early laps but once they reached their operating temperature, they could hold that extreme level for what seemed like forever. Roczen, meanwhile, would have a more difficult time holding that peak performance. It’s not that he would trail off, per se, he just wasn’t as lethal as time wore on. Roczen unleashes a furious assault in the early laps while the likes of Tomac, Webb, and Dungey would need a minute to find their footing. I believe this to be simply genetically predetermined strengths and weaknesses. These traits can be manipulated somewhat through training but will always be prevalent to a certain extent.

What was so tough about the sand? That was a huge weakness for Kenny.

Roczen was using the right side of the sand because it was smoother while Webb and Tomac used the left side to set themselves up for the finish line corner. As the main event continued, the left side developed a knuckle on the take-off. While that sounds like a negative, Webb and Tomac were able to use it to gain lift, making the double-double easier. Roczen, meanwhile, was struggling to consistently get this double-double cleanly. Further, he was landing on the far inside, so he couldn’t carry as much momentum through the next corner. Through this section, Webb and Tomac were able to hit their marks almost without fail while Roczen had a few miscues that cost him dearly. On a track where four riders (Justin Barcia was in this mix, too) were almost identically matched, this variance was critical. On the laps where Roczen missed this section, the penalty was harsh, In the end, Webb was able to utilize this and set up a pass over the finish line jump and with it, another win.

Jason Anderson has been on form as of late. His starts are garbage and that’s hurting his results, but I like what I see from his riding. I could see a podium run when we visit Salt Lake City in a month’s time.

I also noticed that Aaron Plessinger took a step back at Arlington 3, as he was not quite able to repeat the level he displayed at Arlington 1 and 2. A top ten is still respectable but he was showing his best stuff lately.

Has Justin Cooper retaken control of this 250 West series or are we in store for more craziness?

I have had to reassess my premature conclusions in this class. Leaving Orlando, I assumed this was going to be a Justin Cooper runaway. That has not been the case and mostly due to mistakes from Cooper. His crashes at Daytona and Arlington have opened the door for both Hunter Lawrence and Cameron McAdoo. The bigger issue is that Cooper has allowed them both to gain confidence. Now they consider themselves on the same level and will attempt to claim this title without hesitation. Leaving Orlando, I’m not sure that was the case. What might have been a snoozer of a series is now going to be a fight to the finish.

I have to stop putting Musquin on my team. He has had a horrific 2021 campaign, marred by crashes and injury. I have been squarely in the midst of that chaos, my team suffering alongside it.

Another boom or bust rider for my team has been Mitchell Harrison. I have been burned twice but was also rewarded at Arlington 1 with an eighth-place finish. Good luck predicting how the Muc-Off Honda rider will do moving forward, I can’t figure it out.

One of the most frustrating riders of the 250 West series thus far has been Carson Mumford. He finally made good at Arlington 3, though, turning in a 12th-place finish. I didn’t have him on my team due to the prior heartbreak but he had to be feeling a little better leaving the Lonestar state.

Overall, fantasy is an emotionally taxing experience that provides the best definition of a love/hate relationship with. I am looking forward to the next two weekends where there will be less cursing, throwing of inanimate objects, and shaking fists at the sky.