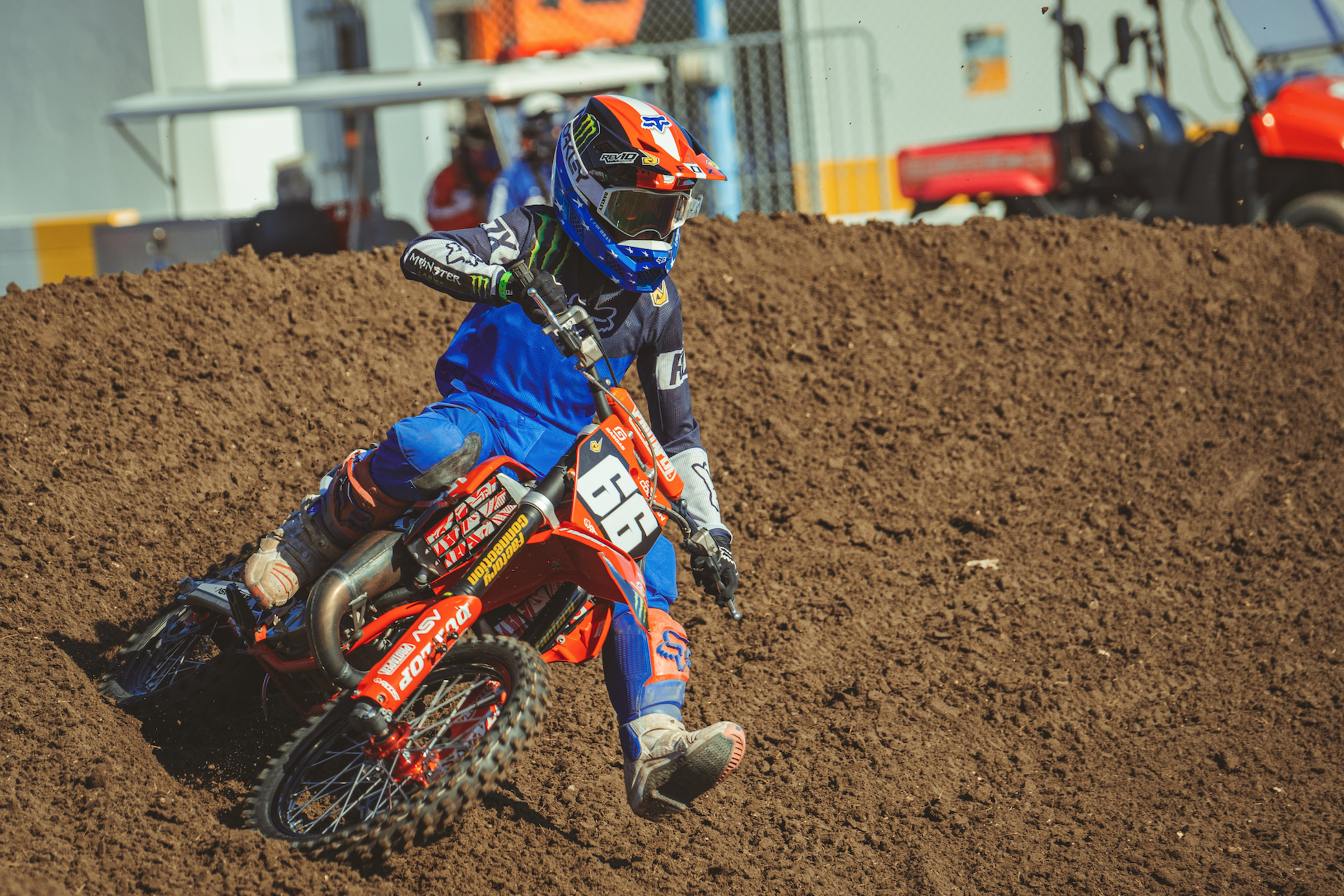 The biggest amateur supercross event on the planet, the Ricky Carmichael Daytona Amateur Supercross (RCSX), returned for its 12th annual trip to Daytona International Speedway on March 7, 8, and 9, where amateurs from all over the country got a chance to race on the same course that the pros raced on during the Daytona Supercross on Saturday night—although it was slightly changed and tamed down. In all, 1,637 entries lined up to compete for championships in 35 amateur and 34 vintage classes.

New for 2021, the RCSX also serves as an AMA Road to Supercross points-earning event with its introduction of the 250 Futures class. This new class will also be featured at the Monster Energy AMA Amateur National Motocross Championship at Loretta Lynn’s Ranch in August. The 250 Futures race was perhaps the premier race of the day, and for sure, the most anticipated race of the weekend. The race was stacked, since anyone eligible and hoping to advance to AMA Supercross was entered, as participants earned points toward advancement into the pro ranks.

A few of the top riders were making their debuts in the “big bike” classes after dominating the mini divisions for the past few years. Among them, Jett Reynolds and Ryder Difrancesco had stellar days. Reynolds was particularly impressive in the 250 Futures final. Jack Rogers grabbed the holeshot to kick off the 15-lap 250 Futures main event, followed by Slade Smith in second and Carter Biese in third. Team Green Kawasaki’s Jett Reynolds got bumped around in the first turn and joined the chase in fourth. Rogers had a clear track on the second lap while Smith, Biese and Reynolds jostled for second. On lap three, Smith took the lead from Rogers, but then went down spectacularly a few turns later when he took a nosedive into a jump. Reynolds was the benefactor with all of the confusion, taking the lead ahead of Biese and Rogers. By lap 11, Wyatt Liebeck had worked up into third ahead of Rogers, with Reynolds and Biese leading out front. At the finish, Reynolds took a comfortable win ahead of Biese, Liebeck, and Rogers. Hunter Yoder slipped into fifth late in the race in his debut with the Phoenix Racing Honda team.

Reynolds returned to the track later in the day where he dominated the Open A division, taking the win ahead of Jace Kessler (Yamaha) and Brandon Ray (Yamaha).

“If you don’t get a good start here it’s gonna be kind of tough on this track,” said Reynolds. “Luckily, I got good starts today. They gave us 15 laps, which was good for me because I’ve been putting in the work with Jeff Ward and that has me in good shape. I mainly came here hoping to make it through all the races and see what happens.”

DiFrancesco went six-for-six last year at Loretta Lynn’s and then made the jump to the big bikes for 2021 and didn’t miss a beat. In his first main event of the day, the Team Green Kawasaki rider took the lead right after the start of the 250 B main and pulled away to a more than impressive win ahead of KTM’s Caden Braswell and Kawasaki’s Gage Stine. Later in the day, DiFrancesco claimed a dominate win in the 450 B class as well, finishing comfortably ahead of Stine and KTM’s Austin Kapoukranidis.

“This was my first time on a big bike and it felt good,” said DiFrancesco. “I got good starts all day and just rode my race. I’m still learning the big bike but it’s coming around.”

“All the gates are kinda rough, so it was difficult picking a good one, but I got off to some good starts today, which is key for this track,” said Cochran.

KTM riders Agustin Barreneche and Jude Smerlick were second and third in the Supermini 2 (13-16) class, while Luke Fauser and Thomas Wood were second in third in the Mini Sr 1 (12-14) division, both on KTMs.

Other riders claiming more than one win included New Hampshire legend Tony Larusso, who claimed championships in the Senior 40+ and in the Senior 45+ classes; Landon Gibson, with titles in the 85cc (10-12) Limited and the 85 (10-12) divisions; and Georgia rider Jordan Bowen, who took wins in the 450 C and 250 C Junior (12-17) classes.

Logan Best proved to be best in the Schoolboy 1 (12-17) division, the Triangle Cycles North Yamaha rider passing Noah Stevens (KTM) on the second lap and then holding off Yamaha’s Justin Allen to take the lead.

Best, who struggled during qualifying races on Sunday, looked in top form on Monday as he stretched his lead to a comfortable margin by the end of the race.

Bryce Shelly (KTM) moved into second place with an inside move on lap four, dropping Allen (Yamaha) to third, and from there the top three was set in stone.

Ivan Aldama Jr. finished fourth on a KTM, with Crocket Myers rounding out the top five on a Yamaha.

“I had such a terrible day yesterday and I’m so glad I was able to come out here in the finals and get a win,” said Best. “This is such a stacked event, everyone is fast, so I just went into the finals thinking about myself and not worrying about the competition”

Gabriel Andrigo came away with a hard-fought win in the 450 B Limited class. The Brazilian, who is in the country training at South of the Border training facility, mixed up with fellow KTM rider Austin Kapoukranidis in a race that saw multiple passes by the two riders and a little bit of bar banging. Andrigo made a last-second pass to claim the win with Kapoukranidis settling for second. Alex Ransom was third on a Yamaha.

“I’m good friends with ‘Kap’ and we are giving it all we had, it was a fun race,” said Andrigo.

Tennessee’s Shelby Rolen (KTM) showed the guys how it’s done by winning the Vet (30+ B/C) ahead of Aaron Cannonier (Kawawaski) and Kristopher Clark (Yamaha). Rolen then finished second to Katie Benson (Yamaha) in the Women class. Benson took 15th on her Yamaha in the College (18-24) class.

View results from the 2021 RCSX

Watch the archive of the RacerTV.com broadcast

After two full days of amateur racing on Sunday and Monday, the vintage bikes took to the track on Tuesday for the Third Annual Daytona Vintage Supercross. Perhaps more about the motorcycles than the race, the DVSX is a spectacle of MX history. Four decades of racing and motorcycle antiquity are covered in the DVSX event and riders of all ages participate in the spectacle as a record 363 riders competing in 34 vintage and modern classes took to the course to vie for championships and trophies. Classes ranging from 125cc to Golden Masters (60+) were featured, with riders from all over the country competing. Classes were broken into six different groups starting with Vintage and going through 2008 with the Revolution 2 classes.

Unfortunately, due to COVID-19 restrictions, the Vintage Off-Road Motorcycle Show normally hosted in the Fan Zone was not held, but it will hopefully return for 2022.

Six-time AMA Supercross/Motocross Champion and four-time Daytona SX winner Jeff Stanton led the Evolution 2 Masters 50+ class, ahead of multi-time national champ Doug Henry, where the spirit of Vintage Days was exemplified when Stanton slowed just before the checkered flag so that he and Henry could cross the finish line side-by-side. It was an amazing gesture, which spoke to the very spirit of the event.

In all, Stanton, serving once again as the Grand Marshal for the Daytona Vintage Supercross, competed in three events, winning two: Evolution 2 Masters 50 and Evolution 3 Masters 50. Stanton was sixth in the Revolution 2 Open class.

At vintage races, bench-racing is often as much a part of the action as racing and DVSX is no different. According to 64-year-old Scott Wallenberg, former pro racer and many-time RSCX competitor (and Racer X Illustrated publisher!), the event is a trip back in time.

“It takes me back to when these bikes were what we rode in the pro classes,” said Wallenberg. “It’s such a great fellowship to be with like-minded people.”

Wallenberg rode a 1972 Monarch to fifth in the 125 Vintage class.

Florida’s James Nagy Jr. also came away with two championships, finishing first in the Revolution 1 Masters 50 and the Modern Masters 50 classes. North Carolina’s Robert Berry won two classes with victories in the Vintage Open class and in the Evolution 1 Open division on his Maico. Ohio’s Billy Harbert Jr. rode a Suzuki to wins in the Evolution 2 Open class and in the Evolution 1 125 class. The Warrior class, for military and first responders, was once again part of DVSX and Florida’s James Gaines went 1-1 on a Yamaha to take the win ahead of Mark Oldroyd’s 2-2 and Travis King’s 3-3. Alex Wagers claimed wins in the Revolution 2 Open, Open and 250 classes.

View results from the 2021 vintage supercross