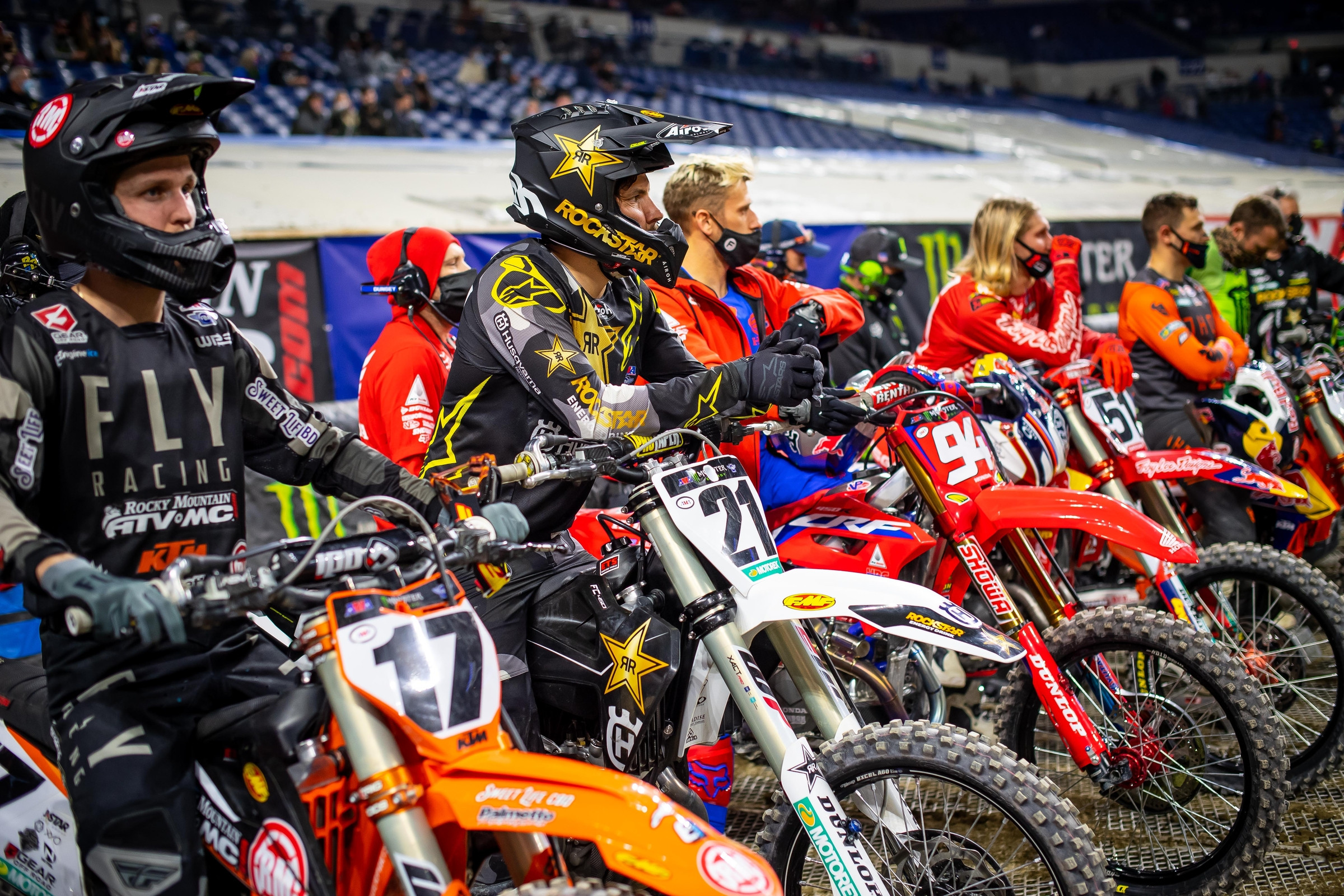 Roll on round seven! For the first time since 2007, we are headed into Orlando, Florida. The site of Ricky Carmichael’s last Monster Energy Supercross race, we have seen a whole generation of racers come and go since we last raced inside Camping World Stadium (formerly the Citrus Bowl). The big variable for the next three rounds (Orlando 1-2 and Daytona) will be the weather. With rain forecasted for this weekend’s event, it could throw a wrench into what we think we know.

The interesting thing for this track design is that it’s an almost exact copy of that 2007 round. That race featured an epic battle between RC and James Stewart. Those legends won’t be racing this time around, but the 450 class should give us plenty of drama, anyway.

The start is set on an angle and fires into a long left hander. The first rhythm section will be executed in one of two ways (this is all based on dry conditions). Riders can jump over the first tabletop, down-siding it and setting up for a very efficient 3-3. Even better, that 3-3 allows riders to use the smaller 3-foot take-off to stay low and fast. If that doesn’t work, they could also step on-step off and finish the rhythm with a 3-2. This looks to be a less ideal combo on paper due to two factors: the triple take-off is a 5-foot jump forcing riders higher and the last double will be very slow.

The next 180 will slingshot riders over the first of two standard supercross triples on the Orlando course. Landing from the triple, there are a few small rollers to traverse before another 180 right. The only set of whoops are up next and watch for these to break down significantly throughout the night. They will start out as blitz-ready but will slowly devolve into a rut that riders can power through. A small double into a tight left-hand corner will set riders up for a very slow wall-jump style section.

After ripping past the mechanics' area, a few rollers and a small double sets riders up for the second triple. Landing from the triple, look for riders to dive to the inside of the next 90-degree corner. They will use the inside line to double, then go 3-2 through the next five jumps. That puts them into a bowl berm and for the brave, a 3-3 down the next straightaway. This 3-3 will be very difficult to execute, especially as the corner develops ruts. If the 3-3 becomes unavailable, look for riders to switch to a 2-3-1 and inside across the next 90-degree right. That will send them towards the finish line jump while also protecting the inside line.

Landing the finish line jump sends riders into a flat right hand 180 and onto the start straight. This right-hand corner will be tricky to manage traction, but the inside line should be the main race line. Watch for riders to swing wide and try to slingshot down the straight for a passing line but this rarely works with modern day traction control capabilities and the torque on hand.

This is the last 250SX East Region race for quite a while, and I am more than okay with that. The class has been absolutely decimated by injury and it really wasn’t very deep to begin with. It has provided a great opportunity for privateers to shine, though. They are turning in results that will define their career. In a decade or two, no one will care about the class depth, but they will always cherish these memories.

As for who I will be looking to choose for my team, there is still value in the mid-pack, but the long shots have been paying, too. Bobby Piazza was a 16 last week and rewarded his teams nicely. I think Curren Thurman could be in that same position going into Orlando. I am more comfortable with riders like Kevin Moranz, though. He’s almost a certainty for the main event but also possesses the staying power to finish in the top 10. Watch for the weather to be an important factor here, too. If it’s muddy, some of the riskier picks may be in the fold.

For the 450SX Class, it’s a whole new ball game. With Shane McElrath, Dean Wilson, and Tyler Bowers returning, there are many picks to choose from. I will be watching Wilson and McElrath closely. I will most likely end up with a mix of the newbies and a couple of the riders that struggled at Indy 3. Zach Osborne is certainly on my radar, and Justin Brayton would be if I had not picked him at round six. Another rider to watch for is Brandon Hartranft coming off of a DNQ at Indy 3. There are great picks at every turn in this 450 class. As the Grail Knight in Indiana Jones would advise, choose wisely.

Orlando spectators are automatically entered into a drawing in which the winner gets a free spot in the 250SX East main event.

Steve Matthes, Esquire, is officially hired to defend the honor of Vince Friese in the court of public opinion. His exhibits include several Dyson vacuums and that emoji of a man shrugging his shoulders.

Orlando being RC’s last SX race in 2007 is mentioned over 150 times on Saturday’s broadcast.