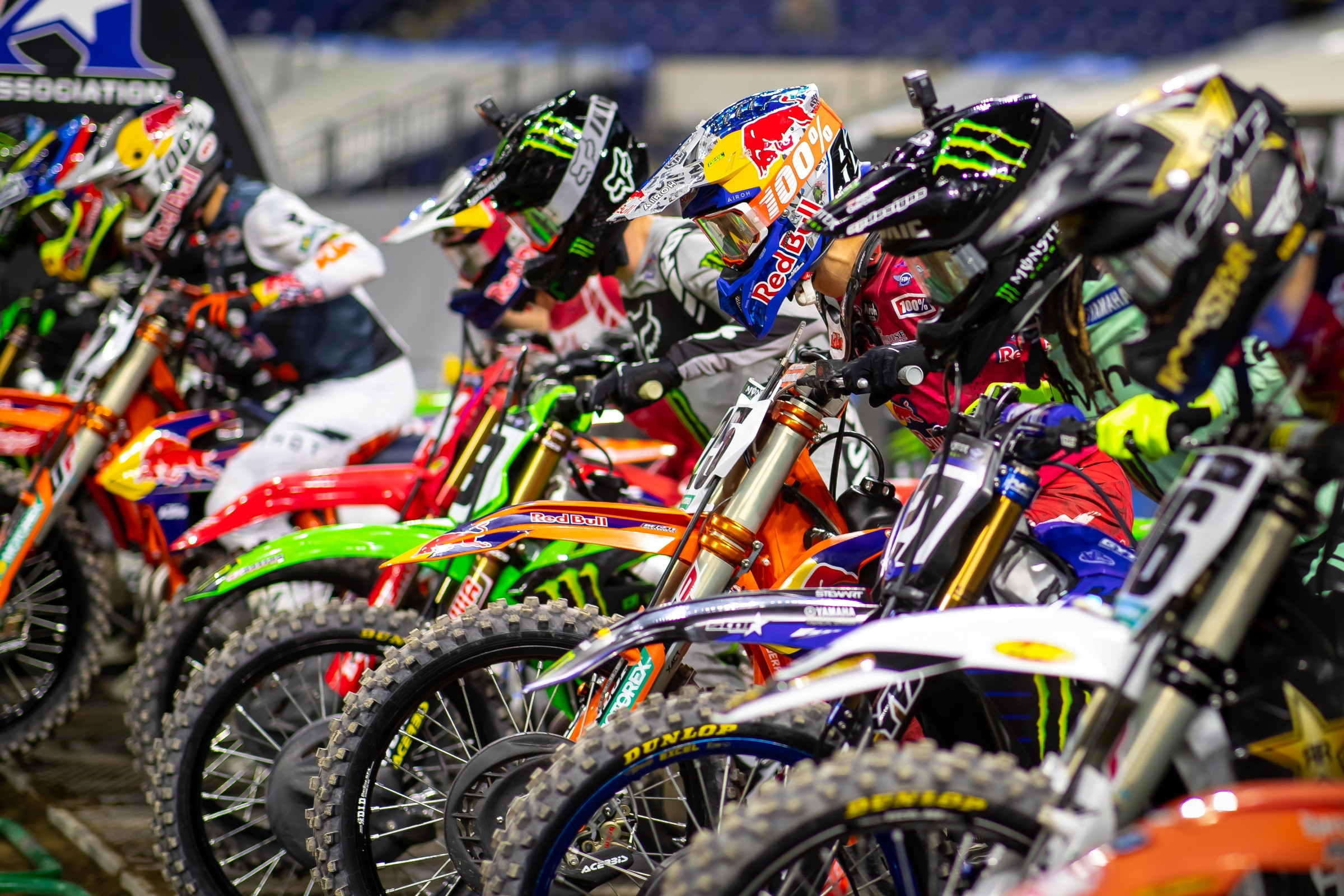 The second straight round inside Lucas Oil Stadium in Indianapolis, Indiana, provided quite the show. From drama to crashes, the night had so many talking points to bench race about after the dust settled. As such, we fired off questions to long-time pro Jason Thomas again to see what JT$ thought of the Indianapolis 2 action.

A Tuff Block on the inside of a 180 captured countless riders in heats and even the 450 main. What was going on?

Catching Tuff Blox with foot pegs, brake levers (both front and rear), and tires has been a forever issue. The toughest part is that the plastic covers to these are very grippy. When contact is made, the subsequent grab is usually enough to upset the bike or rider enough to cause a crash. I have had this happen many times in my own racing career and have gotten up and kicked said Tuff Block more than once.

One story I should mention here that relates. In 2002, they used hay bales instead of the Tuff Blox we see today. Hay bales were much more easily pushed around but also didn’t offer the same impact protection as Tuff Blox. Knowing the ease in moving these, riders could push them out of the way to create a new line as the main event wore on. In the Houston main event of that season (2002), there was an elevated turn that was embanked on the stadium wall. The embankment acted as a berm and we immediately turned back down towards the floor below. As the track deteriorated, the one and only rut to turn through became rough and treacherous. The track marker designating just how high we needed to climb the wall was a hay bale. Knowing that these were mobile, I used my foot as a guide and simply pushed it out of the way, clearing a perfectly new line a foot lower on the embankment. A track worked would return every 3-4 laps and put it back into place, meaning I would have to take the main rut that lap while also once again using my foot to push the hay bale down the hill. I could then use the new line for the next few laps. It was awesome and also very borderline within the rules. At least I didn’t get a fine and a photo of Jake Weimer for my troubles. By the way, I went on to finish eighth in that 450SX main event.

Jett Lawrence's heat race crash was set up through a track change (removing an inside hump, adding a Tuff Block in front of mechanics' area. Can you describe that whole scenario?

First, let it be known that Tuff Blox on landings is ALWAYS a bad idea. There is no situation where that will ever be safe, especially on a track with ruts that cause unpredictable trajectories. Having said that, the track crew was attempting to protect the mechanics from a rider jumping too closely to their area. I can certainly appreciate that thought but this one was poorly executed. At bare minimum, riders need to be warned that there is a Tuff Block there and to be mindful (note: this may have happened unbeknownst to me).

Moving forward, just please remove any and all Tuff Blox on jump landings. I understand the promotional requirements with sponsors, but they are a crash waiting to happen.

Besides those incidents, anything else odd happen that you noticed?

Ken Roczen said he wasn't letting things get him down this year. He's taken back-to-back races with frustration and turned it around with back-to-back race wins. What does this say about his 2021 mental game?

He looks and seems great on and off the bike. He has been a bit tight lipped about his new mental approach, but it seems to be working through five rounds. I am much more impressed with his speed and how he has gelled with that 2021 CRF450R. He has a very good grasp of what the bike is going to do before it happens which is a huge part of racing at that level. I know there are worries about him sustaining that level but man, oh man, does he look good so far.

Thoughts on Justin Barcia's struggles and turn around?

I loved what I saw from Barcia at round five. His horrific night at round four was completely erased (points aside) and he is back to his confident self. He was able to fight off a charging Eli Tomac and rack up another podium on a track that had him completely befuddled 72 hours prior. I would be curious to know what they changed (if anything) but he looked like a different guy in the round five main event.

None of the riders would admit this, but near the 20-minute mark of these mains, on super brutal tracks, are they battling through fatigue? Does that lead to some of the mistakes we see?

I don’t believe that the top guys are. I believe the track just deteriorates to a point that it creates mistakes. These guys are trying to hold their lap time but that becomes increasingly difficult as the track gets worse. They have to take on more risk to keep that same pace which naturally leads to a higher chance of mistakes. If the track stayed exactly the same throughout the 20-minute race, you would see far less of that. Often times, I would put in my best laps late in the race on a consistent track.

What do you do in life if you're luckless like Zach Osborne and Marvin Musquin?

Like the song says, “If you’re going through Hell, keep going.” There is nothing else they can do. They are riding well and that’s the most important factor. The rest is pure variance. Remember when Zacho could do no wrong late in the 2020 season (indoors and outdoors)? Well, that usually averages out over time. Both he and Marvin are in a slump but that will turn around and we will see them fighting for podiums very soon. When the riding is solid, the rest is short term noise.

Do you think Michael Mosiman had a win coming?

Tough to say but he looked great. The only reason I won’t stamp it is because of Colt Nichols’ tendency to make moves late in the race. As the track got worse, that may have presented a chance for Nichols to close in and make a move. That shouldn’t take away from how great Mosiman looked but with Nichols firing on all cylinders, it should be a consideration. Mosiman gets another chance at it in four days and with Jett Lawrence wounded, it seems to be a very short list for podium contenders.