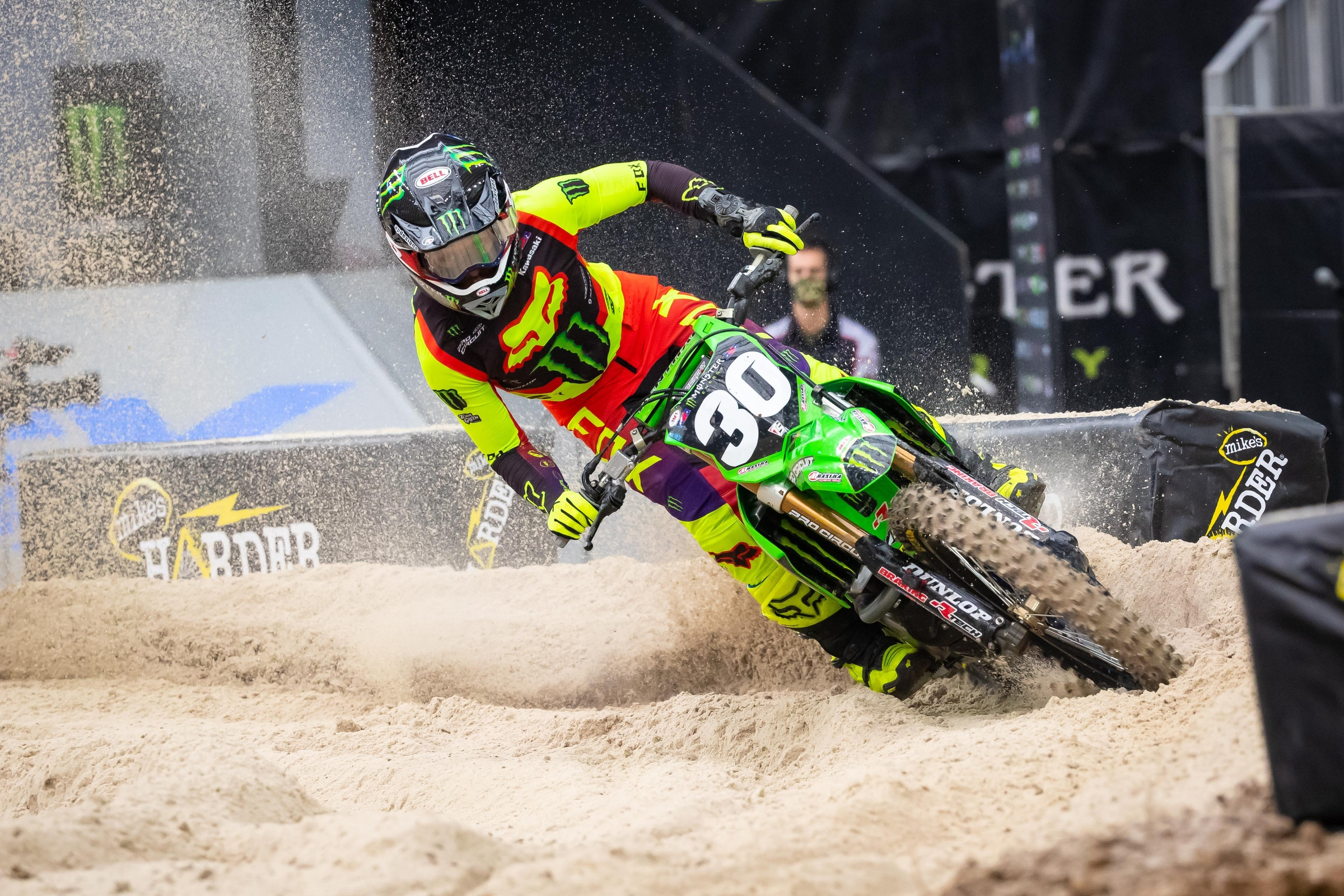 Things weren’t picture perfect for Michael Mosiman at the opener—he tangled with a lapper, went down, and finished seventh. Not the worst result in the world, but Mosiman is capable of more, which he proved at H2 by winning his heat race and earning fourth in the 250SX main event. Before the season got underway Mosiman told us he wanted to be a consistent podium contender, and he took a big step toward that goal on Tuesday night. We’ll see if he can make it happen before supercross leaves Texas. –Aaron Hansel

The results sheets don’t reflect just how fast RJ Hampshire has been at the first two rounds. The Rockstar Energy Husqvarna Factory Racing rider has looked good at both, has been quick in qualifying, and probably should’ve had at least one podium finish by now. Unfortunately, he’s crashed at both rounds, with help from Forkner at H2, and as a result, has finished fifth and ninth and sits seventh in points. Don’t expect this to happen all season—Hampshire will find his way to the podium. The only question is, will he put it together at H3? –Hansel

Jett Lawrence’s list of things to do in 2021 got a little smaller on Tuesday night when he absolutely dominated the 250SX main event. The Honda HRC rider was brilliant, leading every single lap of the race before taking the checkers nearly eight seconds ahead of runner-up Colt Nichols. He even won his heat race! To celebrate he barked like a dog during his post-win interview on television, which no doubt caused Justin Cooper to raise an eyebrow in muted amusement. If Lawrence follows up his first win with another at H3, it could be a bad sign for the competition. –Hansel

Don’t look now but Colt Nichols has been quietly raging his way forward at the first two rounds of Monster Energy AMA Supercross. He’s been third and second-fastest, respectively, in qualifying, and hasn’t finished off the podium in a main event, taking third and second. His worst result so far is a fourth in his first heat race of the season! Not shockingly, he sits second in points, just three back of Christian Craig. Yet, like an F-22 Raptor, he’s somehow managed to largely evade the radar thus far. But, with results that good, everyone is going to be well aware of his presence at H3. -Hansel

Okay, so in the grand scheme of things, 36-year-old Justin Brayton isn’t exactly a fossil, but as far as racers go, his tread is closer to the wear bars than most. That didn’t stop him from landing on the podium on Tuesday night, however! The Muc-Off Honda rider had to earn it too, holding off pressure from Cooper Webb in the final stages of the race to seal the third-place deal. Brayton’s clearly gelling with his new team and motorcycle. If he gets out of the gate well at H3, will the older brother of supercross nab another podium? –Hansel

The third round and final round of the first tiple header in Houston, Texas, will see a brand new layout across the floor of NRG Stadium, whereas the first two rounds were similar builds. With the starting gate moved to the center of the Texans’ field, the first turn will become an uncommon right-hand turn. While there will be a sand section for the second straight week, the section will be a rhythm section into an obtuse left-hand turn that is sand as opposed to a 90-degree, right-hand turn. The sand section this week is expected to be more than just the turn as it expands into four rollers that will also be built of sand before a 180-degree bowl berm into the finish line. As we saw on Tuesday night, sand sections require precise execution lap after lap. With main events seeing a higher number of laps (28 laps on Saturday in the 450SX main event and 29 laps in the Tuesday 450SX main event), this section could develop into quite the game changer. As a whole, the build features several bowl berms for block passes and sections where various lines could be used as each rider looks to find an edge on the competition. Watch for the riders who find a flow early and look to carry it into the main event. -Mitch Kendra

Similar to Nichols, new Monster Energy/Pro Circuit Kawasaki rider Jo Shimoda has seemed to fly somewhat under the radar in the first two rounds as well. He was leading his heat race on opening night before being passed by Forkner but he finished a strong fourth in the main event. Then, he finished fifth in his heat and fifth in the main event on Tuesday. While he finished third in the 250SX East Region in 2020—albeit in a depleted championship that had lost several title contenders—you can see how much Shimoda has improved since then. Shimoda said he suits the Kawasaki well and while he yet to claim a win in either of the first two rounds, his results seem to back up his belief. Shimoda sits fifth in the standings through two rounds but his status as an underdog could become spoiler for title hopefuls such as Craig, Nichols, and Lawrence if he continues to put his head down and ride mistake free. -Kendra

Entering the season, Dylan Ferrandis was hyped up just as every rookie is prior to their debut season in the premier class. While he finished seventh in the opening round, it’s one round so we can’t blow up one way saying “see he’s a title threat” or the other saying “see he’s not ready yet” talk. At the second round, he rode extremely well, coming from tenth on the first lap to finish second. Aside from the gifted positions from AC, Chase Sexton, and Zach Osborne who all crashed, who did Ferrandis go through? Justin Brayton, Malcolm Stewart, Marvin Musquin, Cooper Webb, and Dean Wilson—none of whom are slouches on the track. Again, while it’s still too early to really say Ferrandis will be in the championship fight come the end of the season, he sure is in it now as he sits second in the standings through two rounds as he’s only one point behind Justin Barcia. Again, there’s a full 15 rounds left that Ferrandis has to get through, which is not typically easy for a rookie but this sure is a great starting point. Seven-two finishes at the first two rounds and second in points after breaking his hand in December and having limited time on the bike before the season? Ferrandis will take it. Let’s see what else he can take while he’s got the hot hand. -Kendra

Champs on the Charge

Both Eli Tomac and Cooper Webb had rides at the opening round that left you scratching your head. It appeared the second round wasn’t going to a whole lot better after Tomac went backwards in his heat race as well. However, Tomac turned it around for the main event win while Webb found his groove in the second half of the main event to narrowly miss landing on the podium. So, was round one just a big speedbump for both and we can expect much better results Saturday? We shall see! – Kellen Brauer

The first two rounds of 450SX have left us with a championship case that could go just about any direction. It’s as if there’s really only 15 rounds of the series and we’re just starting over this Saturday with how close the standings are. With that in mind, a few riders will begin to establish themselves as the clear head honchos of the series moving forward, and it might not be long. In the last two seasons, the eventual champion won their first race at the third round of the series. Will that trend continue? – Brauer