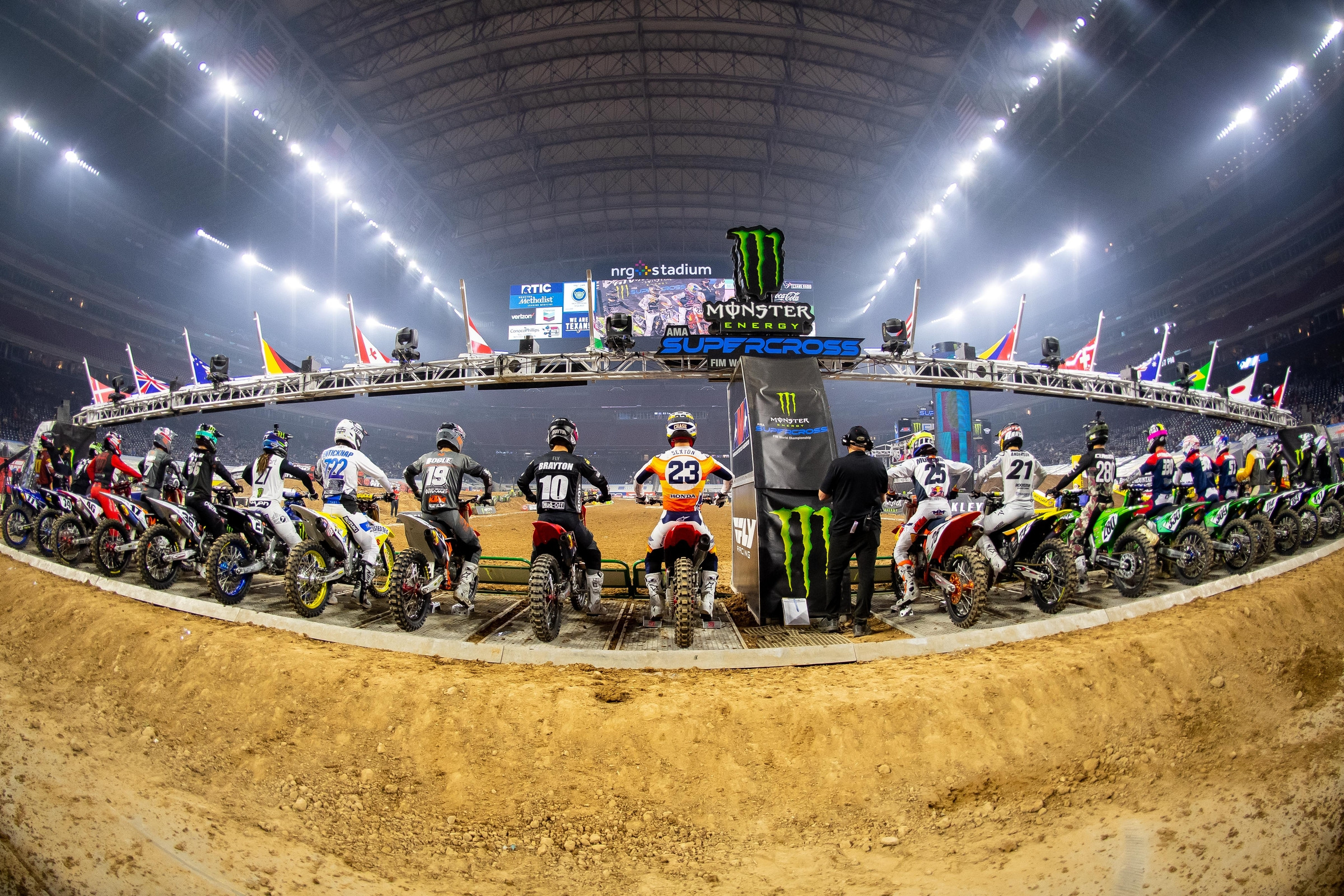 Welcome back to… Houston! The third and final of the Houston rounds is up next. We have seen an incredible couple of races thus far and I have no reason to believe that round three won’t be just as good or better. After two similar tracks (minus the change of direction), this third round has a brand new and much more challenging layout.

The start at round three is the shortest of these Houston races and also adds a right-hand first corner. With the short start, hopefully speeds will be manageable without the easy use of the rear brake (right leg will be off the peg for many). The first rhythm section consists of seven jumps, almost always resulting in two doubles and a triple in some sort of combination. In this case, look for riders to use the inside line through the corner and go 2-3-2.

The next bowl berm sends riders into an opportunity to go big if so desired. This rhythm section could be a 3-3-3 but I think riders will choose a different option. If riders decide to go 2-3-3-1 and then to the inside of the following corner, I think that’s a better option. This 2-3-3-1 option allows riders to utilize the lower 3’ take-offs versus the taller 5’ options. This keeps the jump trajectory lower which equals more speed. That combination allows riders to single across the inside of the next corner which is always ideal in comparison to tripling to the outside and struggling to stop. While 3-3-3 sounds great on paper, I think it will turn out to be the lesser of the choices.

The aforementioned 90-degree left sets up for a short rhythm across the width of the stadium. The fastest line would be to step-on to the first two tabletops, step off and then single into the next turn. I could also see riders step over the first tabletop and then quad into the next corner. That quad would put them on the outside of the next 90 degree left which would be ideal.

The following rhythm section is a split section with riders on the inside going 2-2-3 and the outside line setting up for a 3-3. I personally believe the outside line to be the better choice as long as the first triple is not terribly difficult. The two triples back-to-back would be a nice opportunity to take a deep breath and relax the arms if only for a second or two.

The next 90-degree left brings riders into the sand, which has been expanded for round three. The sand is more of a straight line this week but does have a few single jumps that could get tricky as conditions deteriorate. The sand dumps into a bowl berm, slingshotting (is that a word?) riders into the finish line jump. Over the finish line jump, look for riders to land on the left side of the downside. That will set them up to sweep across the next right-hand corner (using outside to inside strategy) and carry speed into the only whoops section on the Houston 3 course. These whoops could provide more opportunity than the first two rounds as the fast lead-in corner will give those inclined to “send it” their chance. Watch for the usual whoop masters like Mookie, Brayton, Roczen, and Cianciarulo to shine here.

Another bowl berm will propel riders backwards down the start straight and into a tight left corner. The final rhythm section will either play out as a 1-2-2 or a 1-3-1. I prefer the 1-3-1 option if viable because it allows riders to roll the last jump and stay tight in the next corner. Protecting the inside line has been paramount on these Houston layouts and I see no reason for that to change at round 3.

What a wicked game PulpMX Fantasy is. The most difficult part is that you can make a great pick and it can still blow up in your face at any point. Crashes and mechanical failures are a big part of the sport and will absolutely annihilate your fantasy team. It’s not a matter of if, it’s when. You can pick privateers or factory riders and the variance will still bite you at some point. Zach Osborne looked ready to haul a boatload of points for his team and a late crash dashed those hopes. Benny Bloss suffered a similar fate. It’s simply impossible to exhale in relief until your rider has crossed the finish line for the final time. Brutal, brutal game.

This week brings those riders that were picked at round one back into view. For me, I will be looking at those riders who have struggled on the results page but are not necessarily riding poorly. Osborne is a perfect example of this dynamic. He crashed in the first corner at round one but fought back for a tenth and then crashed while chasing down the lead at round two, also ending up tenth. Expect a much better result than tenth on Saturday.

In the 250SX Class, picking these privateer riders is playing with fire. Yes, they can bring big points, but they can also shoot their 250 into the cheap seats. Watching these 250 riders on the bubble of qualifying is not recommended by 99.4 percent of all cardiologists. Proceed with extreme caution.

The 450SX Class are a bit more predictable but it’s still been a wild affair for many. Martin Davalos has shown crazy speed but that craziness has led to several crashes. Vince Friese gave everyone a scare with his crash at round two but has been a solid point scorer so far. Kyle Chisholm deserves a shout out here also as Chizz continues to Chizz on anyone and everyone.

For round three, I will be looking for a score over 200 but minimize the downside risk.

According to Kawasaki press releases, RJ Hampshire falls over and lands on Austin Forkner at every remaining round of Monster Energy Supercross.

GasGas releases a statement concerning the lack of fun while stuck in first gear.

The tougher layout creates a bit of craziness in the results.

Christian Craig leads every lap of his heat race and main event.

A federal probe is launched into the Tomac/Friese incident from round one. I will entertain any and all rumors on this subject until we have facts, including: Russians hacking the AMA infrastructure, Ukrainian oil and gas oligarchs funding a coup, Tomac thinks Friese was the second gunman on the grassy knoll, LaserGate, WaterGate, Kevin Costner’s WaterWorld, and any variation of a Nicolas Cage movie plot.