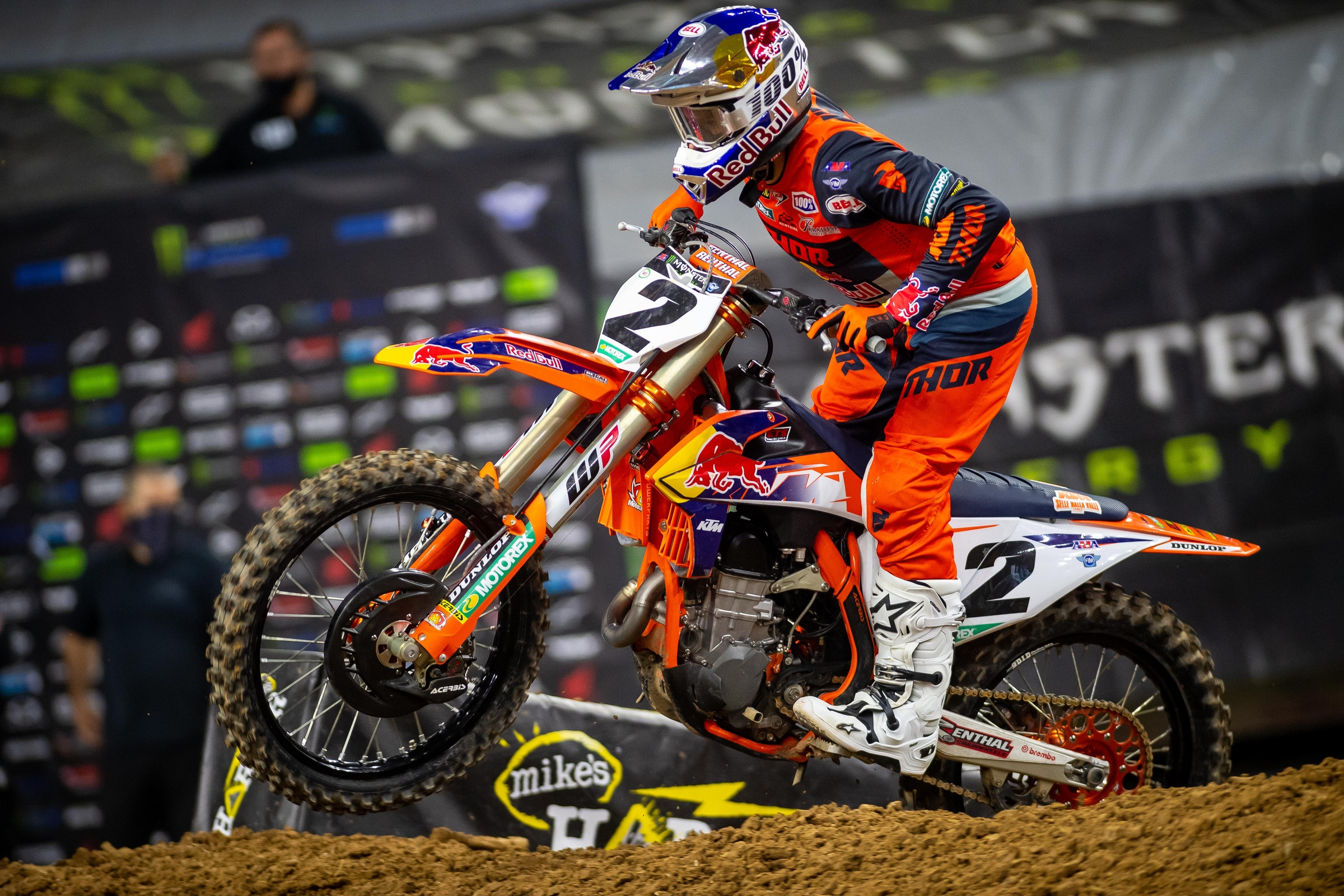 The results: 9-4, and 10-10. Those are the early-season returns for Monster Energy Supercross title threats Cooper Webb and Zach Osborne, respectively. They sit eighth and tenth in the points. Their seasons couldn’t be any different. For Osborne, he has actually delivered on the hype of taking another step in his 450 supercross development, showing real, repeatable speed almost every time he’s on the track. Scratch his massive press day crash from Friday and a slow time in the first qualifying session of the year, and he’s been good since. He won a heat at round one, he came from 22nd (first turn crash) to 10th in the main event. At round two he had the pace to close on leader Eli Tomac in the second half of the race. Then he crashed and fell back to ninth, then a last-lap, last-turn pass from Justin Barcia gave Osborne tenth.

Osborne has been fast. He looked super disappointed to throw away those points when we saw him walking in the pits after the race. His riding was good, but the net score was far from what he wanted.

“Overall, it was a really positive day for me,” Osborne said in a team press release. “I just felt really supreme all day and things were easy for me. I had a good heat race, felt really good gelling with the track, and in the Main Event the same thing. With two to go, I just pushed the front in a rut and there she went. It’s a big mistake that veterans like myself typically shouldn’t and wouldn’t make so it’s disappointing and frustrating but I’m healthy and safe and my bike is really on point right now so I’m happy to come back and give it another go on Saturday.”

After winning a 450 supercross last year and then taking the 450 Class Lucas Oil AMA Pro Motocross Championship, there was an assumption that Zach had arrived at the very front of the 450 supercross pack. But really, winning the final round of a season is always hard to judge, as many riders are often cruising for points, ready to move on, or simply not taking risks. Zach hasn’t won either of these first two races, but he’s shown his speed is absolutely worthy of top billing.

As for Webb, the on-paper results are better than Zach, but the actual riding hasn’t been. He was in tenth most of the way at round one before Jason Anderson’s late fade moved him to ninth. It was far from the inspired, gritty type of charge we’ve come to expect from Webb. At round two he hung tough during a huge battle with Ken Roczen, Justin Barcia, and more (and even Webb, when not at his best, still seems to somehow have magic for Roczen late in the races). Still, while this fourth-place finish was more of a grind-it-out type performance than a sizzler, it was more of what we’re accustomed to from Webb—managing the bad nights. In general, Webb just appears off from peak form. The fourth is a testament to that grinder spirit we didn’t quite see at round one, but to really put this championship into focus, he needs more flash.

“It was a bit of an up-and-down night,” said Webb. “I was still trying to find a really good setting for me that I liked and I kind of struggled throughout the day. I didn’t have a great start in the main but at the end I really started going. I made some late passes, got a few gifts and ended up fourth. It’s not what we want but it’s still early in the points and we’ll rebound. There’s still room for improvement to get me more comfortable on the bike and with that I think this week we’ll be right there where we need to be.”

At round two, NBC Sports television reporter Will Christien said she had talked to Cooper’s chiropractor, Dr. H. Rey Gubernick, AKA “Doc G,” and he said Webb’s back injuries (which date back to last SX season) were starting to flare up during the off-season bootcamp. It led to Webb having to back his riding and training down a bit before the season. That reasoning makes sense, and now the 9-4 can be viewed as gritty rides that keep him in the championship fight, rather than sub-par performances that take him out of it. Regardless, Webb would be the first to say he’ll need more, quickly, to get to the front.

Which one of these two contenders rounds into full form first? Does Osborne’s obvious speed carry him to victory, or does Webb find the pace that took him to plenty of race wins over the last two seasons. Both? Neither? Webb is looking for speed, Osborne just needs to execute it.