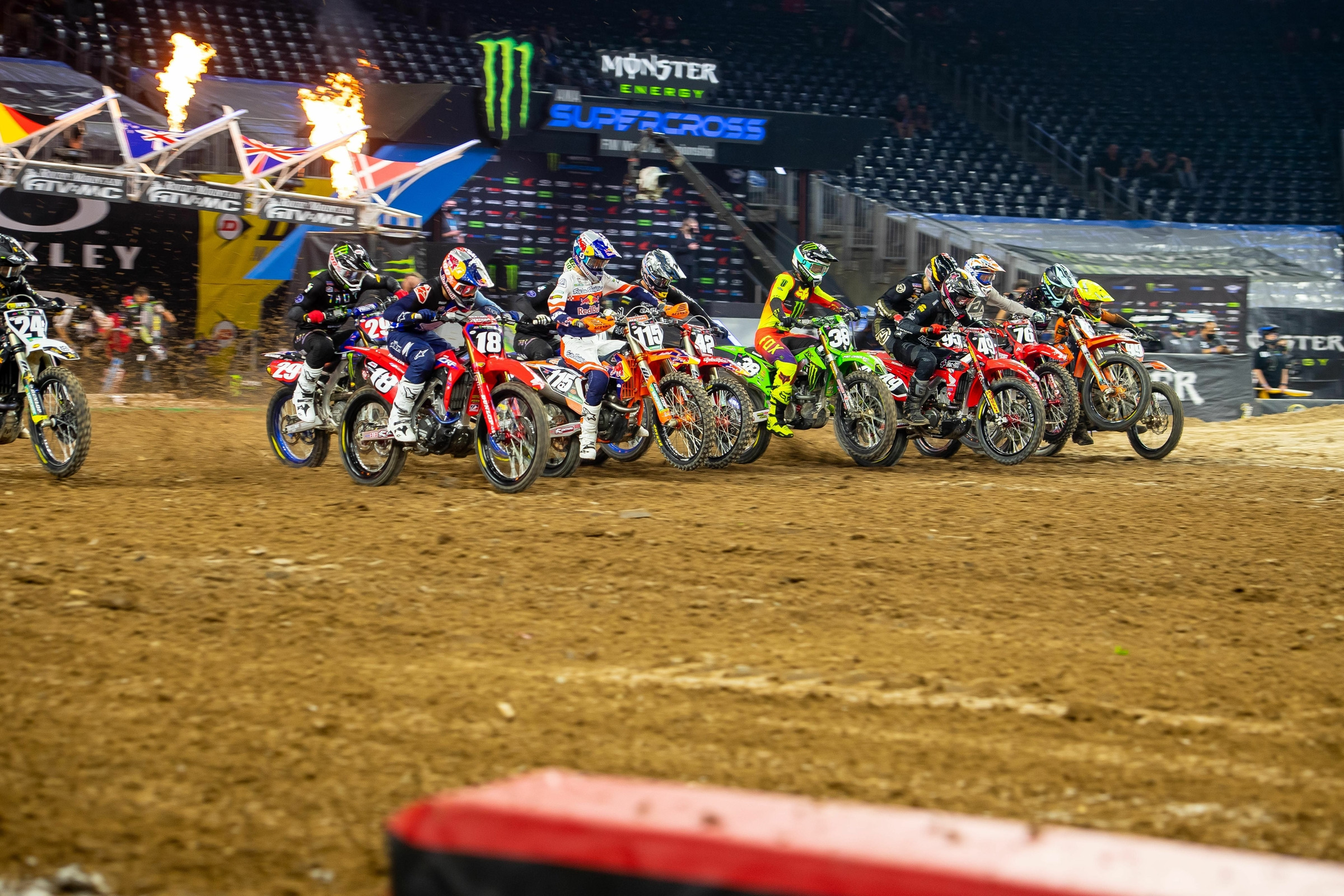 What a crazy night. Each Monster Energy Supercross season begins with a stacked field of talent and unpredictable action, and the second round of the 2021 season stirred those ingredients together to create a memorable night of racing. There are so many stories that we don’t even know where to start!

So, we can start with the end. It seems tame, as defending Monster Energy Supercross Champion Eli Tomac finished the race with the victory, an outstanding bounce back after his lackluster crash-induced 13th at the season opener on Saturday. However, victory by the champion belies how wild this night was. Briefly, it looked like the youth was about to run wild, as Chase Sexton holeshot the race with Adam Cianciarulo right behind him. The kids were rolling, as Cianciarulo was the fastest qualifier and Sexton won his heat race, and they quickly left Tomac behind in the early laps. Then it came undone in a tricky sand turn, as first Cianciarulo and then Sexton crashed in the same spot. Sexton’s crashed was a wild one and he hit the ground hard, luckily able to walk off under his own power, but taking a 22nd place finish. Cianciarulo lost tons of spots and finished the race in 12th.

So Tomac found himself in the lead after outlasting the kids, but an experience veteran was coming in Zach Osborne, who was taking time out of Eli’s lead. Then Osborne made a few mistakes and Tomac stretched it back out, then Osborne closed again! The Tomac stabilized  things a bit, and Osborne made a mistake and crashed. It was a heartbreaker for After that, Tomac finally had victory in his grasp.

“Then it was just trying to manage Zach,” said Tomac. “He was creeping up a few tenths, and I couldn’t figure out where I was losing the time. Then maybe five minutes left I was like, “I really have to go now.” I pushed a little bit harder and that’s what really got me through to the end.”

With 13-1 finishes now for the first two rounds, Tomac suddenly erased much of the damage in the championship.

““I was stressing out,” said Tomac. “16 points is horrible after round one. That’s a terrible hole to be in. I was pulling my hair all day…. That [win] was so huge for us.

“I made a fork change between round one and two and that was it,” said Tomac. “Just a fork change and trying to figure out some things and why I rode so poorly at round one. Made that one change and felt more comfortable today."

Late in the race, 450 rookie Dylan Ferrandis was on a huge charge. He looked amazing and was closing on Osborne, and when Osborne crashed, Ferrandis took over second, a podium finish in his second 450 ride.

“I can’t believe I’m here, I’m not supposed to be, I never expected that,” said Ferrandis. “It’s crazy, the last couple of laps I was P3 and I was like, ‘Dude is that for real?!’ It’s unbelievable, the first one, just to be in the top ten in this gnarly 450 class was great, and now to be on the box, wow.”

Behind that? Oh, that deep 450 field was on fire. Justin Brayton started up front for the second race in a row on his Muc Off Honda, and he dealt with huge pressure. The likes of Ferrandis, Malcolm Stewart, Zach Osborne, Cooper Webb, Ken Roczen and Justin Barcia were in there. Ferrandis busted through when Brayton made a huge bobble in the whoops, but he recovered and managed to keep Roczen and Webb behind him all the way to the checkers. Yes, the 36-year-old Brayton is on the podium, his first trip to the box since Indianapolis in 2018. It was certainly a popular podium for the veteran and his new/old team. Muc-Off Honda has roots with the Australian Honda team Brayton raced with for multiple Australian Supercross Championships.

Behind that? Oh, that deep 450 field was on fire. Justin Brayton started up front for the second race in a row on his Muc Off Honda, and he dealt with huge pressure. The likes of Ferrandis, Malcolm Stewart, Zach Osborne, Cooper Webb, Ken Roczen and Justin Barcia were in there. Ferrandis busted through when Brayton made a huge bobble in the whoops, but he recovered and managed to keep Roczen and Webb behind him all the way to the checkers. Yes, the 36-year-old Brayton is on the podium, his first trip to the box since Indianapolis in 2018. It was certainly a popular podium for the veteran and his new/old team. Muc-Off Honda has roots with the Australian Honda team Brayton raced with for multiple Australian Supercross Championships.

“I’m not 37 yet, I’m only 36!” joked Brayton. “I’ll be 37 in March! But yeah these are hard to come by, so hard to come by in this field. I don’t think people expected me to do this, especially at round two, or even what I did at round one. For me, this new Honda is awesome, and I’m surrounded by familiar faces with Muc Off Honda. We’re a smaller team with big effort and it’s rewarding to get it done. Hard to come by and we’re definitely going to enjoy it.”

When the smoke cleared from the battles behind that, Webb was fourth. It still wasn’t an amazing night for the 2019 AMA Supercross Champion, but it was better than ninth at the opener.

“It was a bit of an up-and-down night," Webb said in a team statement. "I was still trying to find a really good setting for me that I liked and I kind of struggled throughout the day. I didn’t have a great start in the main but at the end I really started going. I made some late passes, got a few gifts and ended up fourth. It’s not what we want but it’s still early in the points and we’ll rebound. There’s still room for improvement to get me more comfortable on the bike and with that I think this week we’ll be right there where we need to be.”

Webb was in a battle all night with Roczen, who ended up shuffled to fifth, but somehow emerges with the points lead anyway (although all results and points are under review, currently, due to red cross violations). Roczen's Saturday night rival, Justin Barcia, got his shifter ripped off and had his bike stuck in first gear down the stretch, which pushed him back to ninth. Barcia and Roczen had started mid-pack and were battling each other as they moved forward.

Note: The AMA and FIM have handed out points penalties on due to jumping on a red cross flag. Roczen has been docked four championship points, but no positions. The AMA has consistently handed out points penalties, but not positions, for red cross violations over the last few seasons. Barcia is now back into the points lead with Ferrandis, Brayton and Musquin, second, third and fourth. Roczen is now fifth.

Marvin Musquin finished sixth, he too a victim of the sand with a crash similar to Cianciarulo.“I got a great start in the Main Event, which was once again the key," said Musquin. "I was right there and felt like I was going to have a good race but unfortunately, I crashed in the sand, it was really tricky. I got up and lost so many positions but I tried to fight back and make up the most points possible but there’s not much to say about sixth place. It’s tough but you have to stay on two wheels and stay up front.”

Malcolm Stewart had a good race going, right up there with his teammate Ferrandis, but suddenly slowed for a few laps. He recovered for seventh. Jason Anderson logged a quiet eighth, but that was good since he ran eighth on Saturday night before fading back to 15th. Barcia was ninth and Osborne a very disappointing tenth after showing the speed to run down the lead.

In the second round of action for the 250SX East Regional Championship, Christian Craig was looking to keep the ball rolling from his emotional victory at the opening round. Monster Energy/Pro Circuit Kawasaki’s Austin Forkner was hoping for better starts as he eyed an opportunity to snag the victory at the second round and take the points lead with him.

When the dust settled, neither rider had claimed the top step at Houston 2. The win instead came in the form of 17-year-old Australian phenom Jett Lawrence. The win came nearly a year to the day since Lawrence threw away a victory at the third-round last year in Anaheim, and also backed up the enormous amount of hype coming into the season that was behind the Honda HRC man.

Lawrence’s victory makes him only the second Australian to ever win an AMA Supercross following in the footsteps of Chad Reed. His method of reaching the top step came from a good start that led to a gate drop to flag victory. Lawrence’s starts were on the dot all evening and getting out front was key to break away from the carnage behind him.

“It’s definitely good to get this win out of the way because they always say the first one is the hardest to get,” said Lawrence. “This one was special because A2 was 366 days ago, so it was cool to do it around the same time as there.”

Following a late crash at Houston 1, Lawrence slotted into sixth when the checkered flag waved and capped off a disappointing night from his point of view.

“Last Saturday, the bike setting still wasn’t there,” continued Lawrence. “The rear was overpowering the front. We made some clicker changes today and we were still making some changes all the way up through the last practice.”

The key talking point from Houston 2 will surely fall on the contact between Forkner and Rockstar Energy Husqvarna’s R.J. Hampshire. The two riders were fighting for second place early in the race when Forkner came down the inside and put Hampshire and himself on the ground with a block pass. Forkner was able to rebound for sixth while Hampshire initially had another fall and dropped a lap down before finishing up in 9th. Both riders now sit fourth and seventh in the championship, respectively.

For Lawrence, the victory moved him up to third in the standings, one point behind Colt Nichols who passed teammate Christian Craig late in the race for second at Houston 2. Nichols has landed on back-to-back podiums to start the year putting him just three points off the lead of the series. Despite flying under the radar coming into the series, Nichols feels confident in his ability to challenge moving forward.

“I feel like I’m sitting pretty good,” said Nichols. “I knew I wasn’t going to have as much hype as these guys coming into the series and I’m fine with that. I just want to go out there and perform the best that I can.”

Craig battled past Nichols early in the race, but his teammate re-passed him in the latter laps. Craig looked plenty disappointed during the post-race press conference and could only explain that he was “managing an issue with the bike” for the late-race loss of a position.

The entire field gets the chance at redemption—and just like after round one, there are plenty of riders that need it—on Saturday night, again from NRG Stadium here in Houston.