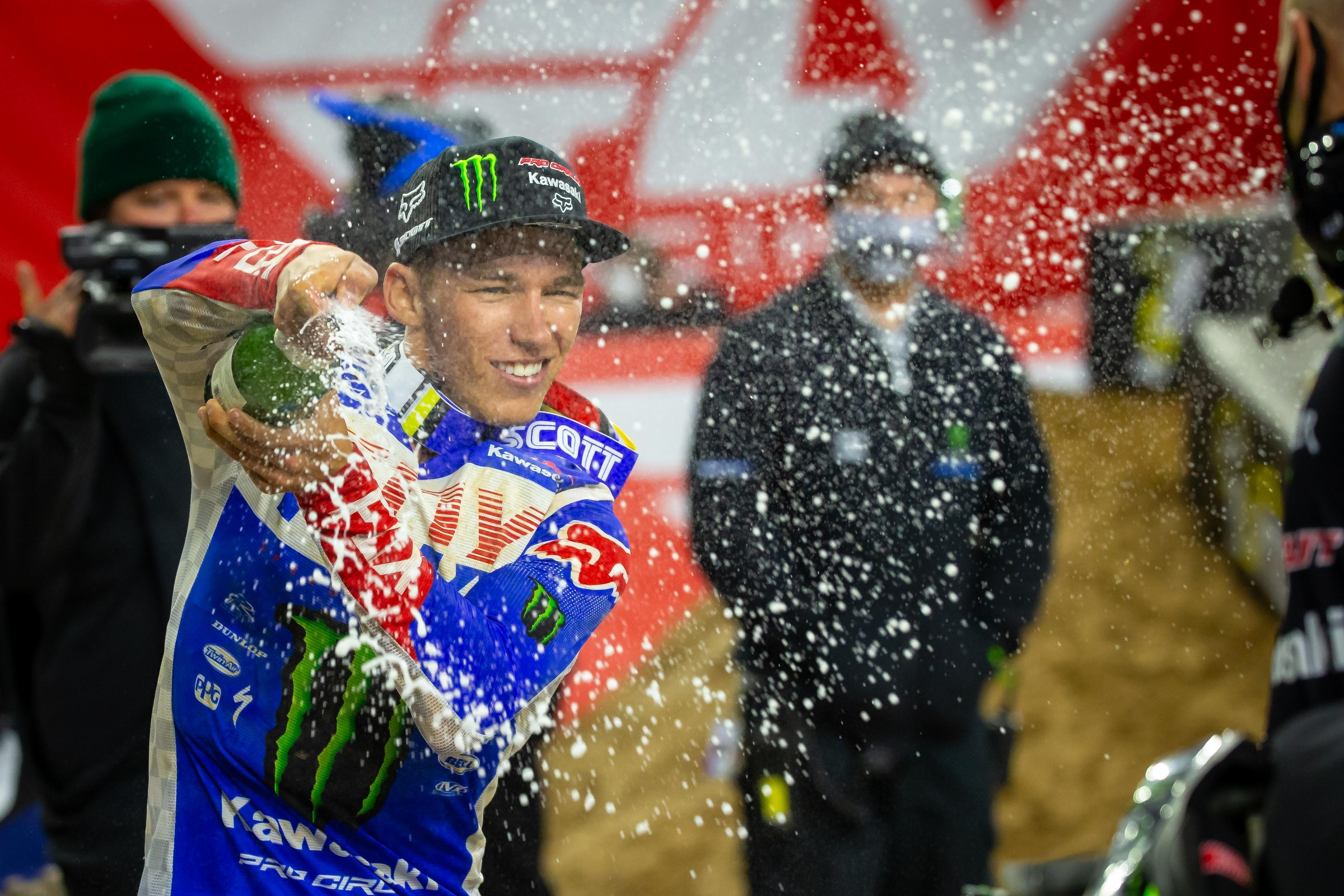 Austin Forkner kicked off his 2021 campaign with a solid charge through the field landing him second on the night at the Houston 1 Supercross. Despite a couple of bad starts in his heat race and the main event, Forkner still felt positive about his day and the riding he did on track. After the race, he spoke with the media about his day in a Zoom call.

Racer X: Austin, a couple years back I remember watching you in qualifying and you just couldn’t stand not being in first. You just had to be first, had to be first. Then in that main event, you get second place and I talked to you on the podium and you were like, “This is a win. I’m just happy to be on the podium.” Is that because the situation is different, or is this part of the maturing process? Again, two years ago you would have never put up with this, and then tonight it seemed more like you were thinking big picture.
Austin Forkner: Yeah. Also, it would probably be different if I would have gotten passed for the lead and gotten second. But I was just happy with the ride because coming around that first turn, I looked up and it was all the big names in the 250 class for this coast in front of me. In the first rhythm section I was like, “This is going to be tough to get on the podium tonight.” Then I got into second and I was like, “Okay, this is good. Even if I don’t win, I’m going to be happy with this race.” I put on a charge and was trying to reel Christian [Craig] in. I did a little bit, but then I really kind of got screwed. There was a red cross between us. I just looked at the lap sheet and I lost over two seconds. I kind of reeled that two seconds in and then I hit the red cross and he didn’t, and I lost that two seconds back. So, I was kind of reeling. I was like, maybe… Then we did that, and I tried but I just couldn’t get that time that I needed to catch him. Then the last lap and a half, two laps I kind of realized that and I just kind of put it on cruise control. All in all, it was a good race and coming off of my injury from last year how it was pretty bad, and with how I rode tonight and uncharacteristically kind of not great starts of me. So, having to come through the pack and being able to pass the top guys like that and getting second, that tonight for me was a win. It was good. So that’s why I’m happy with second, I guess.

If we go back and look at the last couple season, the way they’ve ended for you there’s always somebody whether it be Chase Sexton, that there’s a little bit of drama with, or somebody that you seem to go from a ten to eleven when you’re close to. This year we’re kind of hyping it as Jett [Lawrence] is the guy. What is it that you’re going to work with or who’s going to help you maybe back that down if you need to, while you’re in the heat of the moment? Are you able to do that?
I had to pass him twice tonight. If that’s the guy that was supposed to be my rival… Everybody was hyping it up like that. So, I passed him twice tonight and I didn’t freak out or do anything stupid either time to pass him. To be honest, I don’t really care about everybody hyping one certain person up, especially before the season starts. You don’t even know. You have no idea who is going… A few guys, but you’re like, “This person versus this person. It’s going to be those two for sure.” You don’t know until the racing starts. I’m trying not to get flustered or anything no matter who I pass, and I had to do a lot of passing tonight. So, I feel like I actually handled myself really well with passing. I didn’t really make any stupid, overly aggressive passes. I didn’t really do anything stupid to make a pass. I had a few sketchy moments, but everybody does. Honestly, that’s what I was happy about tonight, was that I had to make a lot of passes and with a track that was kind of half technical, half easy. A lot of other guys were saying it was hard to pass on. I made quite a bit of passes tonight, so I was just happy with that, I think.

What changed for you between practice and the heat and the main? It seemed like you rode a whole lot better when it was race time, even having to make those passes. Did something change?
No. I have just always been a racer. You can look at two years ago. I was kind of really focused on trying to be the fastest, but then I tore my ACL in practice. So, you can look at last year. I remember a few times last year I was seventh, eighth, and then would win. That’s happened in both classes, I’ve seen. Who cares about qualifying? Get through and get a decent gate pick for the heat but qualifying really doesn’t mean anything. Obviously, I want to try. I’m not going to say it isn’t anything because when you’re fastest, you carry your chest maybe a little bit higher walking to the gate for race time just because you were the fastest in practice, you’re the fastest guy there in practice. But setting one lap and being able to do a 15 or 20-minute moto at that pace is completely different. On that one fast lap you usually have a clear track, where in the race you’re dealing with lappers, you’re dealing with whatever. So, it’s just a different thing. I feel like I’ve always been known as a racer over a practicer. Then that one year I put too much emphasis on practice, and I ended up getting hurt in it. So, I tried to take that and learn a lot from that. I always remember I am a racer, just know it. I made a few mistakes in practice and we changed a few things on the bike and made it better, but it just seems like when the lights come on and the pyro comes, it was a big thing tonight because it actually felt like a race, unlike Salt Lake City. That felt like a weird, local supercross. I don’t know what it felt like. With everything and a little bit of fans, you could hear them a little bit, it just felt like a race. I feel like I perform better when it’s race time.