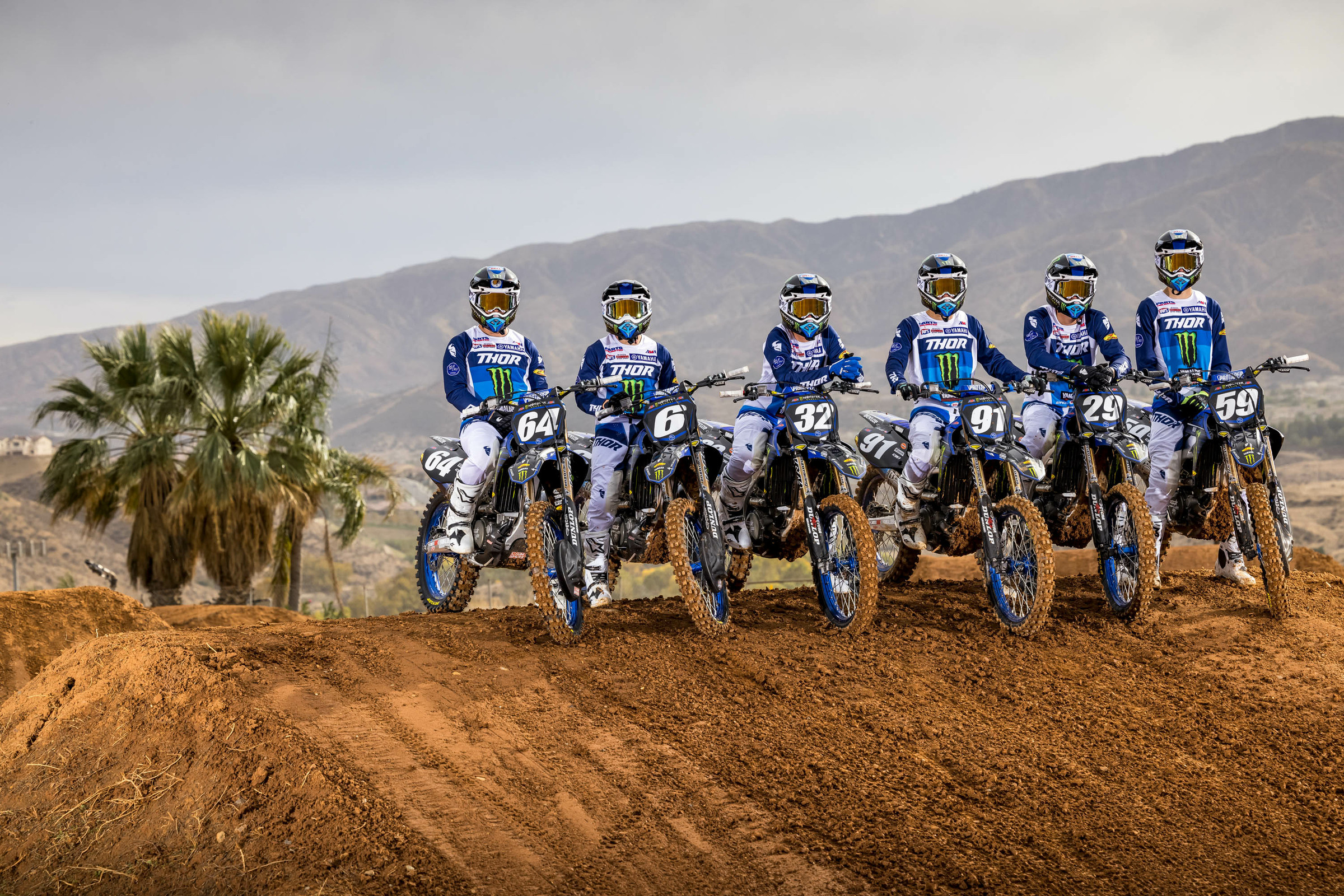 Here is a complete list of the 250SX team rosters for 2021 Monster Energy AMA Supercross. Riders who have announced which regional championship they are racing are also indicated next to their name.

There will be a factory 250 Honda team under the HRC tent for the first time since 2008 as the Australian Lawrence brothers move over from the closed GEICO Honda team.

RJ Hampshire and Jalek Swoll are back from the 2020 roster and will be joined by AMA Supercross rookie Stilez Robertson.

Austin Forkner, Cameron McAdoo, and Jordon Smith will return from the 2020 roster but the team will see two additional new faces in 2021. Jo Shimoda joins the team after his debut supercross season and rookie Seth Hammaker will make his pro debut later when the 250SX West Region kicks off in February.

Notes: Brown is coming off of knee surgery and is unsure if he will be ready for round one of 250SX West.

Monster Energy/Star Yamaha Racing team will have a fresh look in 2021 as only Justin Cooper and Colt Nichols are returning from last season’s team. GEICO Honda riders Jeremy Martin (back on the team) and Christin Craig have joined the roster, as have Jarrett Frye and Nate Thrasher—both raced Pro Motocross in 2020 but will make their respective AMA Supercross debuts in 2021.

Alex “Troll Train” Martin will be the lone rider for the new team that was created from the merging of the three teams.

With the Troy Lee Designs/Red Bull KTM team moving to the GasGas brand, KTM created a factory 250 team and will feature Max Vohland, who will make his professional debut this weekend.

The second-year, Australian-based team will once again have a two rider roster. The Mitchell squared team will welcome in Mitchell Harrison, who is new to the team after racing for the Monster Energy/Pro Circuit team during the 2020 Lucas Oil AMA Pro Motocross Championship. Mitchell Oldenburg returns.

The second-year team will have Coty Schock return to the lineup and will add Carson Mumford to its roster. Mumford will be making his supercross debut.

The ClubMX team will welcome in Garrett Marchbanks and Jace Owen (who raced for the team a few seasons ago) and will see Joey Crown return for a second year. Crown and Owen confirmed they’re racing West, we suspect Marchbanks will as well to make this a West-only team.

The Phoenix Racing Honda team will welcome back Kyle Peters and have announced the signing of Mason Gonzales (rookie in 2020 Pro Motocross), and Enzo Lopes and Josh Osby from the ClubMX team. Gonzales suffered a broken fibula/tibia and ankle in December and is expected to miss all of supercross.

#62 Mason Gonzales | Injured, Out for Supercross

This is now the premier 250 Suzuki team now that JGRMX has closed its doors. Rookie Dilan Schwartz is the most tenured rider on the team since he spent a few amateur seasons with them. The team also features Sean Cantrell, Derek Drake, and veteran John Short. In a practice crash last month, Drake suffered a compound fracture to his femur and his expected return to riding in unknown at this point.

The AJE team saw several changes this off-season, including title sponsor, bike manufacturer, and team roster. Veteran Chris Blose is back but Mitchell Falk and Derek Kelley are new recruits.

Not much has changed for the JMC squad as Carson Brown and Martin Castelo are both back for another year on Husqvarna FC 250 models in the 250SX West Region.

Jess Pettis is making his return to AMA Supercross in the U.S. for the first time since the 2019 San Diego Supercross. He will be pitted out of a sprinter van with support from KTM Canada.

This team is making the leap from amateur to pro. The KTM team will feature second-year man Chad Saultz and rookie Jonah Geistler.

Jordan Jarvis will return to the team as the sole 250 rider and will look to make her first AMA Supercross main event.

Ryan Clark’s Yamaha squad will welcome back Robbie Wageman and announced Chile native Hardy Munoz will also race for the team in 2021.

Grant Harlan (supercross rookie) will return to the team for a second year after racing Pro Motocross and Max Sanford signed with the team and will make his AMA Supercross debut as well.

Logan Karnow will be the lone 250SX rider and will also compete in the 450SX Class on the opposite coast.

The Kawasaki squad will compete with four 250SX riders in 2021. Justin Thompson, the only rider from the 2020 team, will miss supercross due to a torn ACL but the team will have Luke Neese (raced for Phoenix Racing Honda in 2020), Devin Simonson (Houston 1 will be his pro debut), and Ryan Surratt (last raced SX at 2018 Houston, raced off-road in 2020) are new to the team.

#96 Justin Thompson | Injured, Out for Supercross

Notes: The Florida rider was preparing for a second year with the TiLube Honda Racing team but Steve Matthes learned Bailey will not be lining up this weekend and his time with the Honda team has come to an end.

Already getting @PulpMXFantasy updates; Jordan Bailey isn’t racing this weekend. When he races again, he’ll be on privateer route on BLU CRU