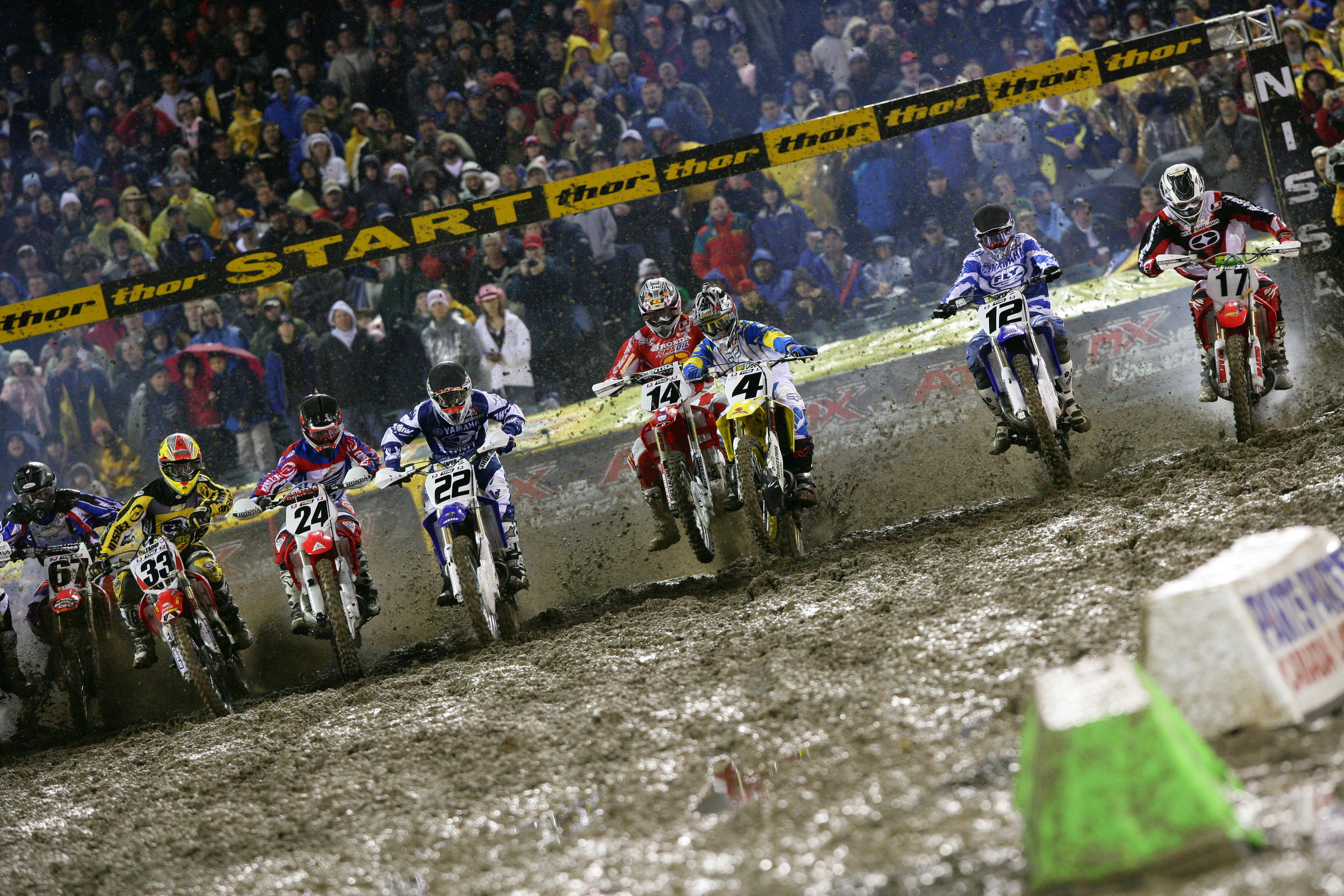 There will never be another race like Anaheim 1 2005. Never. The hype was all-time, because the race marked the first-ever race between the most successful American amateur and 125cc pro riders ever. You know them as Ricky Carmichael and James Stewart. They had never raced in the same race before until A1, 2005. In the premier class!

Neither rider was the defending AMA Supercross Champion! That was Chad Reed. Heard of him?

Also, Jeremy McGrath, the King of Supercross, came out of retirement for this one, and Travis Pastrana was making a comeback. Thus, A1 had the most loaded gate ever. Carmichael, Reed, Stewart, McGrath, Pastrana. It’s the only supercross race to ever have all of those riders. Only. Ever.

Yet somehow that hype got swallowed up by something even crazier. It turned into an all-time mudder, and Kevin Windham won! These days, A1 2005 is remembered more for the mud than the hype, but as we dug into the event, we discovered something else really fun. In the 250 LCQ, three of our (somewhat) staff members are listed in the results! That’s our contributor Jason Thomas, our test rider Kris Keefer, and current NBC Sports TV reporter Daniel Blair, who hosts the Main Event Moto Podcast on our Racer X Podcast Network. Yes, all three competed in the premier class at Anaheim that night. We had no idea this happened, but it’s amazing!

If you want more info on Anaheim 1, 2005 experience, listen to the new Re-Raceables Podcast with Steve Matthes and Jason Weigandt. We’ll have more info on this race here on this website, too. For now, let’s call up these three LCQ warriors and get their take on the night.

1. What do you remember about this race in general? Did you, as a current racer at the time, even care about the hype around the other riders?

Jason Thomas: I remember certain parts of the weekend very well but the actual racing wasn't memorable for me. Leading up to that race, it may have been the most hyped event in history. James Stewart's arrival was everywhere you looked (including the cover of Racer X Illustrated). RC to Suzuki was big, sure, but he had already raced it twice in Canada so I was already past that. To me, the only story was Stew and how he would stack up to RC and Chad. Unfortunately, El Nino would destroy the atmosphere and what could have been an all-time great race into an all-time mud race.

Kris Keefer: I remember that I lost my mom to Multiple Sclerosis a couple weeks before this race so my head was kinda screwed up, honestly. Being that I was from the MC era side of racing, I remember that I was stoked to see MC race again and was honestly curious on how he would do against the current (at that time) crop of factory guys. When I noticed it was raining a lot leading up to A1, I quickly began getting excited because I knew that it would be more of a fair playing field. This was going to be my first race in the 250 class because that year I was scheduled to race the 125 East Coast races with a team that ended up folding before we even got to the East Coast rounds.

Daniel Blair: At the Vegas finals in 2004 my bike blew up on the face of the triple and I shattered both my heels. This REALLY set me back in my prep for the 2005 season so I decided to focus on the 125 East Championship to allow myself more time to prepare. I wanted to use the first couple West races in the 250 class to work out the kinks so I bought a YZ250 (two-stroke!!!) and signed myself up. As round one approached the focus shifted to the weather. December was brutal. I remember only riding a few times in the hills of Corona because all the SX tracks were under water for most of the month. I know there was a lot of hype coming into the season with this big RC-Stew-Reed battle looming, but I honestly didn't care. My goal was to race back into shape and hopefully get through an Anaheim mudder to kick things off.

2. Take us through your heat race, qualifying (which included a lottery system) and the LCQ. Did you look down on the line and say you were gonna slaughter your future media cohorts?

Thomas: Luckily, I was seeded into the night's racing based off of prior year's points. There were many upset riders on Saturday afternoon, not even getting a chance to hit the track due to the lottery system for the 20 open spots (20 were seeded). My races were a complete disaster. I crashed on the first lap of both the heat and LCQ, eliminating any chance of qualifying. Every inch of my body was covered in mud after laying in it. I couldn't grip the bars, couldn't grip the side of the bike, and was sliding off the seat on every jump. I was miserable, really. Mud was never my thing and this was mud on a Biblical level.

Keefer: When the AMA announced that there would be no qualifiers and that there would be a riders meeting inside the storage area of Anaheim stadium, I immediately was pissed off. I was never the type of guy to "win" anything and the thought of the AMA drawing my name out of hat, in order to get the chance to compete wasn't too confidence inspiring for me. To my surprise though my name was drawn out of a hat and I quickly remember yelling to the AMA official, "Hell yes I want to race, plus I finally won something"! The night quickly went to crap though as I managed to wheelie out of the gate in my heat race and LCQ because that damn 2005 KTM 250 SX two-stroke was a freaking nightmare to race. I honestly don't know how [Grant] Langston rode that bike in 2004! And honestly to be fair to JT$ and Blair, I was never as good as them throughout my whole career. They were always leaps and bounds better than me at racing dirt bikes.

Blair: Okay so it's time to clean up the absolute garbage that was spewed on your Re-Raceable Podcast. You should Re-Record the show with some facts. I DIDN"T RACE the LCQ, which means Keefer and JT DID NOT BEAT ME!!!! I made it through the lottery system and was qualified into the program. Practice sucked and I decided I would just do a lap in the heat and call it a night. I didn't want to trash my bike and making the main was not in the cards at this time. So I watched Keefer and JT (who I had zero relationship with at the time) play around in the mud while I sat in the stands, very pumped on my decision. Unfortunately for me and my bank account, I didn't listen very close at riders meeting. Since I didn't show up for the LCQ I was replaced by a fill in, hence my "23rd" place finish and a big fat DNS on the score sheet, which you guys obviously didn't look closely at. Anyways, my check didn't show for weeks and when I called the AMA they said that since I didn't race and essentially finished 41st I would not be receiving any money. I was furious at them, but now that I'm older I realize it was clearly my mistake. Those two laps in the heat trashed the crap out my bike anyways. I learned from this mistake and at Daytona 2012 I did one lap in the heat and one lap in the LCQ at a mudder. That check cleared.

thomas: I was on Subway/Coca Cola Honda and our bike was awesome that year. That was the worst part. I was very prepared for that season. I had won multiple European rounds that off-season and was thrilled with the changes that Honda had made for that 2005 CRF450. My expectations were over the moon right up until I saw the forecast for that Saturday. That 2005 season was still a success but A1 certainly didn't help.

Side Note: Until this was tasked, I had no idea that Keefer and Blair were even in that race! Sorry guys, I doubt you knew I was there either with my piss poor performance.

Keefer: Well I was a production test rider for KTM in 2004 and 2005, but I didn't really spend much time on the 250SX as most of my time was spent on the KTM 125 SX and the new 250 SX-F, so riding that 250 SX two-stroke was an eye opener for me. I think I had three weeks on it total before A1 and with the loss of my mom a couple weeks before that, I just wasn't riding much at that time. I do remember vividly that my pit vehicle was a Dodge Ram 1500 that was parked directly in a huge parking lot puddle that accumulated over the course of the day on Saturday. When I asked an AMA official if I could move my pit, they told me that if I was caught moving my pit vehicle I would risk getting a DQ and/or a fine. So guess what? We changed tires in a damn pond before the night show! After Carmichael triple jumped over my head in the heat race, while I performed an awesome single/single/single through that area, I quickly re-evaluated my 250 racing career on the 2005 KTM 250 SX.

Blair: I was a full privateer in 2005 but I had some unique help. My mom was a flight attendant for Delta and I would travel stand by for every flight. I'd rather not go into detail on how this worked because I wasn't even on her freebie list because I was over 21 and not in college, a requirement. But I was very creative. I even did it Internationally once. I'd rather not go into any detail on that one either. Oh, and my Uncle was roommates in college with a guy who ended up being high up at Days Inn, and I had a code for free rooms that could be used at any Days Inn in the country. Free flights, free hotels, bad year though!