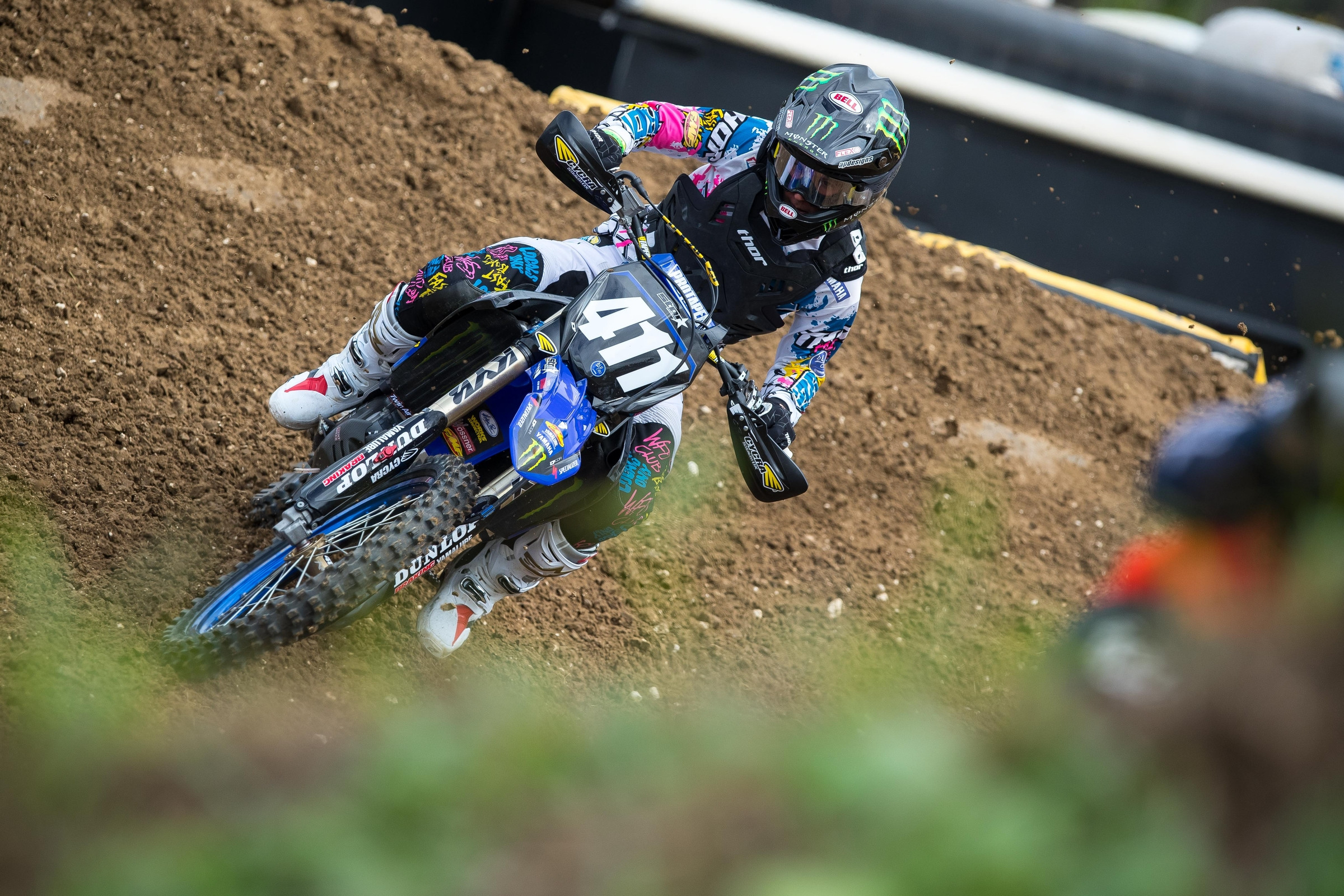 The THOR Mini O’s presented by Pro Circuit completed a week full of racing this past Sunday, going one day longer than usual, as a record crowd showed up to celebrate the 49th running of the event. Held the same week as Thanksgiving, the event is unique among the major amateur national events in that riders are crowned in supercross, motocross and the two combined formats.

“It’s awesome to get those awards because of all the people that have gotten them before me, great riders,” said Cochran. “It means a lot to get those special awards that only a few people can say they’ve ever gotten.”

The Scott Golden Goggle Award, which goes to the rider in the 250 and 450, B and C classes who accumulates the highest number of points in the supercross main and motocross overall combined, went to Rock River Yamaha’s Gage Linville. Linville won supercross titles in the 250 B, 450 B Limited, and a motocross title in the 250 B Limited class.

One of the most spectacular races involving Casey Cochran was the Supermini 2 (13-16) supercross race. Cochran, of Florida, rider pulled away out front. Meanwhile, as KTM riders Collin Allen and Jude Smerlick were fighting over second, KTM Orange Brigade’s Haiden Deegan gained ground and got the two riders in his sights. A lap later, Deegan passed both Allen and Smerlick for second and set his sights on Cochran. With two laps to go, Deegan made a run at Cochran for the lead when Cochran lost his rear brakes.

“When I lost my brakes, I couldn’t push as hard as I wanted to, so Haiden caught me and then he passed me on the last lap,” said Cochran. “We went back and forth for a second and then I went under him in the last corner and won the race.”

The final order at the finish was Cochran, Deegan, Smerlick and Allen. Nate Freehill was fifth on a Husqvarna.

During the motocross races, Cochran had another impressive performance in the Mini Sr. 2 final, totally running away with it.

Cochran jumped out early in the final in the Mini Sr. 2 final, leading KTM riders Thomas "Tiger" Wood and Agustin Bareneche into the first lap. Cochran rode a mistake-free race to take the win and the overall. Meanwhile, Wood finished second for second overall (2-2) and Bareneche finished third in the final and third overall with a 5-3 score.

Deegan managed to take two races from Cochran, the only rider to do so. In the Supermini 2 (13-16) MX final, Collin Allen jumped out front, with Deegan on his heels. Deegan took the lead on lap two with a slick pass on Allen. Once in front, Deegan opened up the lead during the final few laps to take the win over Cochran, who passed Allen with two laps to go.

Rock River Yamaha’s Levi Kitchen was spectacular in the A and Pro classes. After finishing 11th in the qualifier, Kitchen jumped up to an impressive lead in the 450 Pro Sport SX race and never looked back, as he and fellow Yamaha rider Kaeden Amerine checked out on the rest of the pack after the start of the 12-lap main event.

The big battle in the class was the one for third, with Honda riders Kobe Heffner and Cullin Park, Brandon Scharer and Matt LeBlanc, both on Yamaha’s, battling for the position. Midway into the race, Heffner ran off the course, handing third to Park, with Scharer closing. On lap eight, Scharer moved ahead of Park for third and the die was cast. At the finish, the order was Kitchen, Amerine, and Scharer.

In the 250 Pro Sport MX class, Kitchen came into the final race with a win in his heat race, while Monster Energy/Star Racing Yamaha’s Nate Thrasher came into the final with a third. It was Thrasher, however, with the holeshot to start the 10-lap final moto, with Kitchen and KTM’s Brandon Scharer in tow.

Knowing he would still need some help to win the overall even if he finished first in the final moto, Thrasher put his head down and pushed as hard as he could. On the other hand, Kitchen knew a second in the moto was all he needed to with the title, so the Washington-native was content to maintain a safe second to Thrasher. Midway into the race, LeBlanc started a run through the pack and on lap five he passed Scharer for third.

With the order set for the moto, Thrasher took the win in race two, with Kitchen in second and LeBlanc third, giving Kitchen the overall with a 1-2 moto finish. Thrasher was second overall at 3-1, while LeBlanc was third overall at 3-3.

Park moved to within striking distance of Kalaitzian on lap three. On lap four, he made the move, dropping Kalaitzian to third. Meanwhile, Thrasher held a seven-second lead out front.

Counting his heat race win, Thrasher’s moto win was good enough for the overall, with Park getting second overall with a 4-2 performance. Christian Fernandez went 3-3 for third overall.

“I got off to a good start and just rode my own race,” said Thrasher. “I put some good laps together at the start of the race and just tried to square it away and just cruised to the finish.”

Thrasher and Kitchen locked horns in the second moto of the 250 A motocross division, with Thrasher taking the early lead ahead of Kitchen with Park in third. Slade Smith was fourth with Matt LeBlanc, hoping to redeem himself from his mishap in the 450 A class running fifth. Unfortunately, the “Rajun’ Cajun’” went down again on lap three and dropped out of the top 20.

With on lap to go, Kitchen moved to within striking distance on Thrasher, but Thrasher was able to hold on for the moto win and the overall with a 1-1 moto score. Kitchen was second overall with a 1-2, while Park was third overall at 3-3.

“Me and Levi had a good battle out there, we were pushing it to the limits,” said Thrasher. “I made a couple of mistakes out there and it closed it up on me, but I managed to hold on for the win. We both were rippin’ out there.”

Though he didn’t get any wins in supercross, Thrasher won six of his eight motos in motocross.

“I rode good on motocross,” said Thrasher. “Of the two motocross motos I didn’t win, I went down while leading one and I crashed just after the start of the other and worked my way back to third. I felt good all week, and I had good lap times, I just needed to put it all together.”

In the 450 B Supercross final, Eddie Norred (Kaw) grabbed the holeshot, but Romano got out front early, with Yamaha’s Benjamin Garib and Rockstar Energy Husqvarna’s Talon Hawkins pushing the two front-runners. Romano turned in a couple of blistering lap times to establish a safe lead and then cruised the remainder of the race.

Romano got a big jump at the start of the Schoolboy 2 (12-17) B/C MX, leading Hawkins and Linville into the opening lap. Both Romano and Linville came into the race with heat race wins, while Hawkins finished fourth in his heat.

By lap four, Romano had pulled out to a safe lead, while Linville started pushing Hawkins for second. A lap later, Linville made a move on Hawkins to take over the runner-up slot. At the finish it was Romano, Linville and Hawkins, which is how the overall results panned out as well.

Team Green Kawasaki’s Clough grabbed the start to lead the start of the 450 B Limited motocross final, however Linville was quick to make a move and take the lead.

JMC Motorsports Racing Husqvarna’s Brandon Ray turned up the heat and started turning the fastest lap times, which moved him past Clough and to the rear fender of Linville.

On lap five, Ray tried to force his way past Linville on the inside of a right-hander, as the two riders made contact and went down. Linville got off the ground and got away first, as Ray fell over twice more while trying to pick up his bike, allowing both Clough, Zaremba, Cremaldi, and Rorred to go past.

Watch Jordan Jarvis and Jazzmyn Canfield go at it in the Women 12+ class.

Linville and Romano came into the 250 B race with wins in their heat race. Romano grabbed the holeshot with Linville in second after the start. Talon Hawkins made it a fast trio up front.

Romano made a slight mistake on lap two, and Linville moved to the Yamaha rider’s rear tire. Romano was solid, however, and held on for the win and a 1-1 overall championship.

On lap four, Brandon Ray moved up to challenge Hawkins for third, but Hawkins held on to round out the podium with Ray finishing fourth.

Ferry said this about his win in the 125 (12-17) B/C SX final: “I got off to a better start that time, I got out front and kind of rode my own race. The first few laps I kind of rolled too slow and they kind of started catching me, so after that I picked it up but I just kind of tried to ride smart because I knew there were a lot of flags going around here and people getting docked so I tried to be as respectful as I could.”

Among the younger groups, the 65 (7-11) SX class was a barnburner, with Pro Circuit Kawasaki’s Austin Camden, Cannon Hargrove and Yamaha development rider Chase Anderson running in a tight bunch during the entire race. On Lap four, Anderson was able to make a move to pass Hargrove for second, and at the finish the top three was Camden, Hargrove and Anderson.

KTM riders Thomas Wood and Agustin Bareneche each came into the final moto of the 85 12-13 Limited class with a win in their heat race, so whichever rider crossed the line first would be class champion. In the end, the championship came down to the final turn.

Husqvarna rider Mason Simmons grabbed the holeshot in the final moto, however it was Bareneche into the lead after the second turn with Wood in close pursuit.

Wood sized up Bareneche throughout the race as he kept pace with the leader. Finally, on the last lap, with two turns to go, Wood made a move on the outside and came out with the lead. In the following turn, Bareneche tried a move on the inside and he and Wood made contact, with both riders hitting the deck. Wood managed to get going first to take the moto win along with the championship, while Bareneche settled for second. Johnathan Yelton was third on a Husqvarna.

John Grewe came into the 45+ A division with a heat race win, and it was the Kawasaki rider with the lead during the early going in the final moto, but Suzuki’s Barry Carsten ran a determined second and pushed Grewe the entire distance. Carsten put up a good challenge, but it was Grewe with the win, followed by Carsten with Kawasaki rider Gregory Pamart in third.

Grewe took the overall title with a 1-1 performance, with Carsten getting second overall with a 2-2. Pamart went 2-3 for third overall. Yup, more Grewe and Carsten battles!