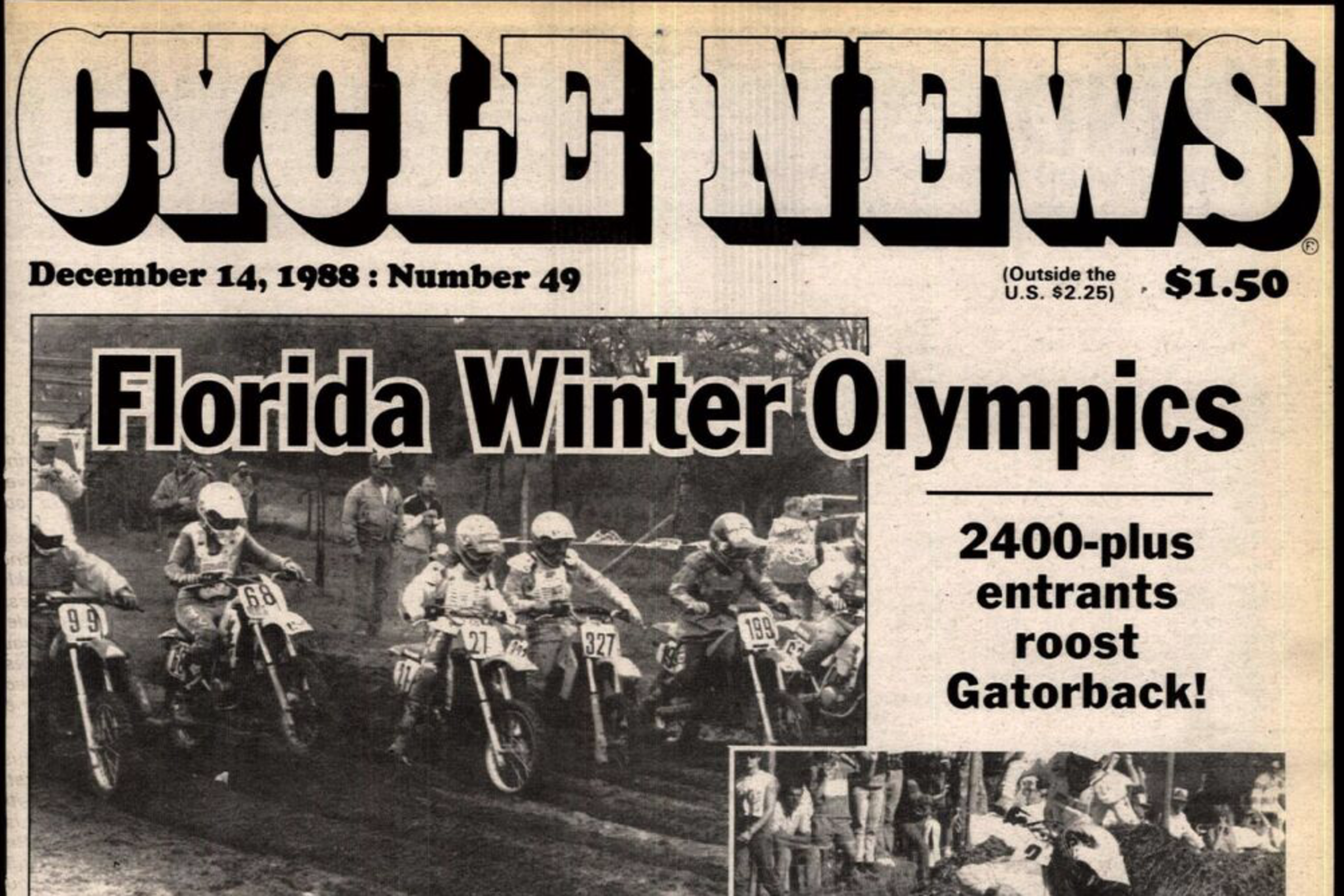 When the 2020 THOR Mini O’s go off next week at Gatorback Cycle Park, just outside Gainesville, Florida, it will mark the 49th running of one of the most unique and prestigious events in all of amateur motocross. With its rich history of multiple disciplines, national-caliber competition and its Thanksgiving traditions, the Mini O’s have long been regarded as one of the most important and popular races on the amateur motocross calendar. And next week you will be able watch the whole week of races streaming live and free on RacerTV.com. As a primer, we'll take a look back at the history of this American motocross institution as it nears its 49th birthday. And check out our riders to watch at the 2020 Mini O's event as well!

First run in November 1972, it all started as the brainchild of a Florida promoter named Pat Ray who ran a track just above Jacksonville called North Florida Raceway. The facility had a small flat track that ran alongside its motocross track, as well as surrounding woods for some off-road trails. Ray’s initial concept was to have all three disciplines—flat track, hare scrambles, and motocross—over a single weekend to crown the best all-around minicycle racers. Ray scheduled the event for the extended Thanksgiving holiday and called it the Florida Winter Nationals. It was unsanctioned the first year, but then picked up for 1973 by the California-based NMA (National Minicycle Association). Even without a sanction that first year, the 1972 race attracted two of the best young prodigies in the country and who helped define and advance minicycle racing in the early seventies, California’s “Flying Freckle” Jeff Ward and Tennessee’s Gene McCay. They would meet for the first time at North Florida Raceway, with McCay on a Honda SL-70 converted into a race bike, and Ward riding the brand new Honda XR75—the first racing-specific off-road model that Honda ever put out. Rain and mud hampered the event, but both Ward and McCay would win motos and classes from one another, setting the stage for one of the earliest rivalries in U.S. minicycle racing. 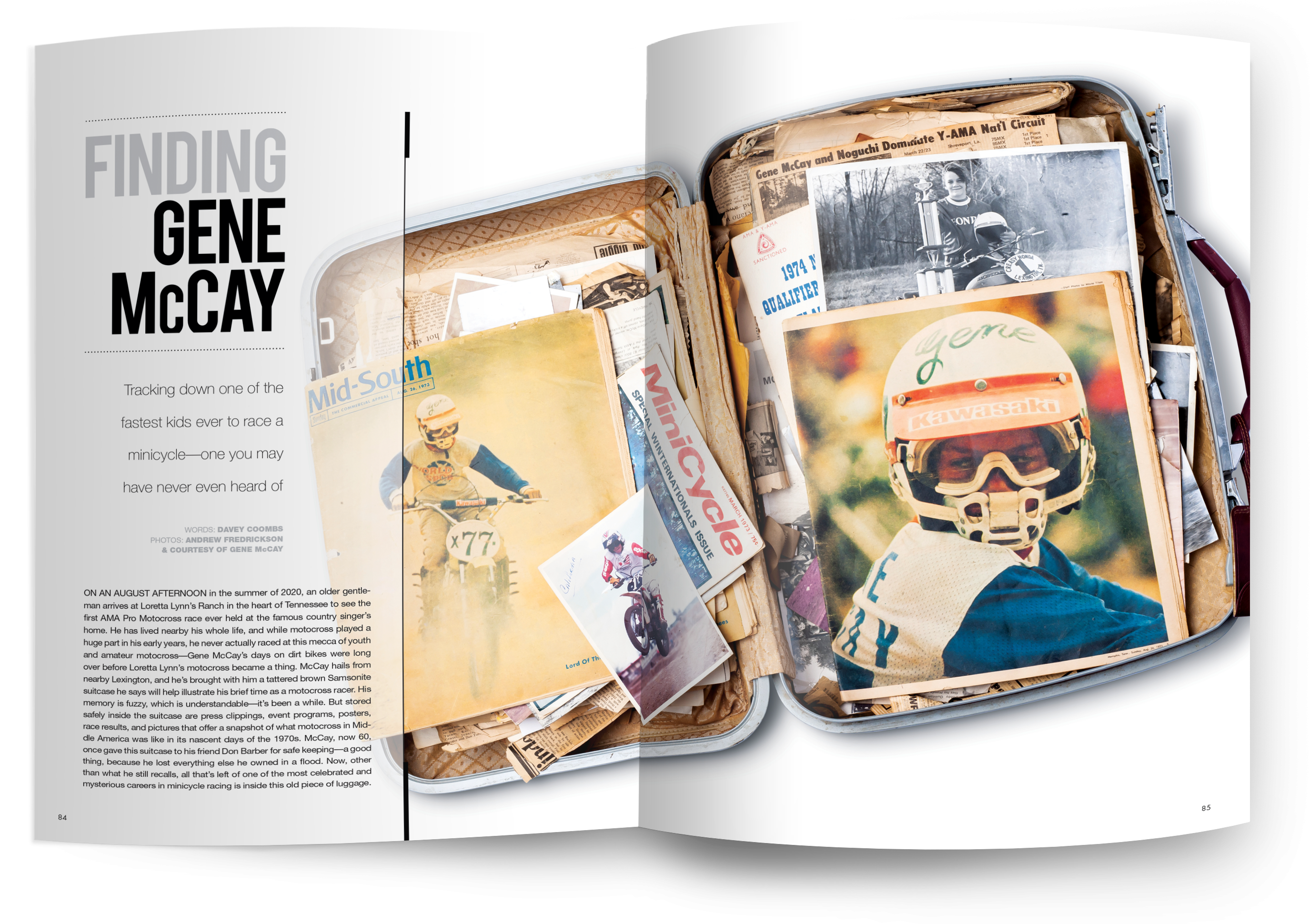 Tracking down one of the fastest kids ever to race a minicycle—one you may have never even heard of. (Read or listen)

Check out the video below to see Davey Coombs read his Finding Gene McCay story from the January 2021 issue of Racer X magazine.

Future AMA Motorcycle Hall of Famer Jeff Ward’s presence that first year added enough national attention to the Winter Nationals that West Coast promoter Ron Henricksen of the NMA reached out to Pat Ray to sanction the race the following year. The NMA’s presence had the effect of drawing many West Coast riders all the way to Florida to compete, helping put the race on the national map that was dominated at the time by the west coast-based NMA.

Following the “Flying Freckle,” as Ward was already known, to North Florida Raceway was “Flying” Mike Brown, who came out with his trick factory Indian motorcycles, as did his California neighbors Paul Denis and Lance Moorewood. Also on hand were Yamaha-mounted Jim “Hollywood” Holley, along with Wardy’s J&B Racing Honda teammates Brad Dutoit and Kurt Henricksen. There were some fast local boys were there too, including Mark Murphy, Brian Ward, Ricky Folsom, Dale Ellis, Doug Longwell, and Tim Eggers. Among the big winners were once again Jeff Ward in the 80cc classes and Indiana’s Kenny “The Missile” Blissett, who topped Ward in the 100cc flat track finals aboard a Steen Allsport.

The ’75 race saw more names of fast kids start popping up that would find their ways into the pro ranks someday. Georgia’s flat-tracker/motocrosser Billy Liles, Florida natives Kippy Pierce, Mark Murphy and Vince Devane, and from the west coast came perennial visitor Ward, who would win the 85cc (12-15) and the 105cc (12-15) aboard slick red Honda Elsinores, one of which was a CR 125cc frame with an engine sleeved down to race Supermini. By this point the multi-disciplined event saw riders and their families often roll in with literally a half-dozen bikes on their bike trailer. Clearly, the event had certainly outgrown North Florida Raceway.

Preview the 2020 Mini O's track below with Greye Tate:

Fast forward to 1977. Flat track racer-turned-event promoter Bill West and his St. Peterburg-based Supersports took over the event from Ray and moved it from North Florida Raceway to a bigger place further south called Chicken Farm Raceway, near a Gulf Coast town called Homosassa Springs. The event still called for a hare scrambles, then a flat track race at nearby Ocala, and then the motocross finals. (Supercross would not become a part of the deal until the mid-‘80s.) West also sanctioned with the Ohio-based AMA rather than the NMA.

By this point the sport of amateur motocross in America was really growing, though the West Coast still basically ruled most big amateur races. But new names were emerging from all over the country, including Louisiana’s Scooter Stafford, Michigan’s Dave Hollis and Jeff Spreeman, Pennsylvania’s Davey Johnson, and Florida’s own Kenny Keylon, Karl Jordan, Todd Hempstead, John Olten, and Ronnie Tichenor. The big winners of the ’77 event, officially dubbed the sixth Annual Florida Winter National Minicycle Olympiad and attended by some 700 riders, were Todd Hempstead (of Barney’s Yamaha fame) and Scooter Stafford. And by now the race was known around the amateur circuit as the Mini O’s.

By the early 1980s the Mini O’s had expanded its class structure to include more and more adult motorcycle classes, as the race had become a Thanksgiving tradition for many moto families. Moms would cook up turkeys bought by either the promoter or race sponsors for a big Thanksgiving feast that become a major part of the whole Mini O’s experience. All of the OEMs were participating as well. It was also soon time for another move, and West took the event to its current home, Gatorback Cycle Park, though the dirt track racing would still take place in Ocala. West also brought on the husband-and-wife photography team of Mike and Anne Adair to document the races, which in turn helped the Mini O’s to expand even further into the motocross mainstream. The work of the Adairs helped elevate southeastern motocross in a big way, especially in the pages of the industry’s bible of the time, Cycle News.

This east-versus-west vibe at the Mini O’s is what really helped elevate its stature as one of the U.S. motorcycling industry’s must-attend amateur events, because it offered the first look at many of the top young riders, often right as they moved up from 60s to 80s, 105s to 125s and more. And at the center of it all during its massive expansion of the 1980s was not a West Coast import like Jeff Ward, but rather the Beast from the East himself, Damon Bradshaw. Yamaha signed him to a true factory contract, and he went straight from the amateur ranks to the pros—actually, it was even quicker than that! After winning the coveted Bronze Boot Award three times, in November 1988 Yamaha decided to send Bradshaw to Osaka, Japan to race the All-Japan Supercross, along with 15 U.S. Supercross stars, including Rick Johnson, Jeff Ward, Ron Lechien, Johnny O’Mara, Micky Dymond, and more. Just 16 years old, Bradshaw beat them all in the main event in Osaka in what was basically the first professional supercross he ever raced. He then flew back to the states in time to race the last event of the 17th Annual Mini O’s, the off-road Grand Prix, aboard a Yamaha YZ250, topping Bobby Jay Mann, Mike Brown,  Denny Stephenson, and more.