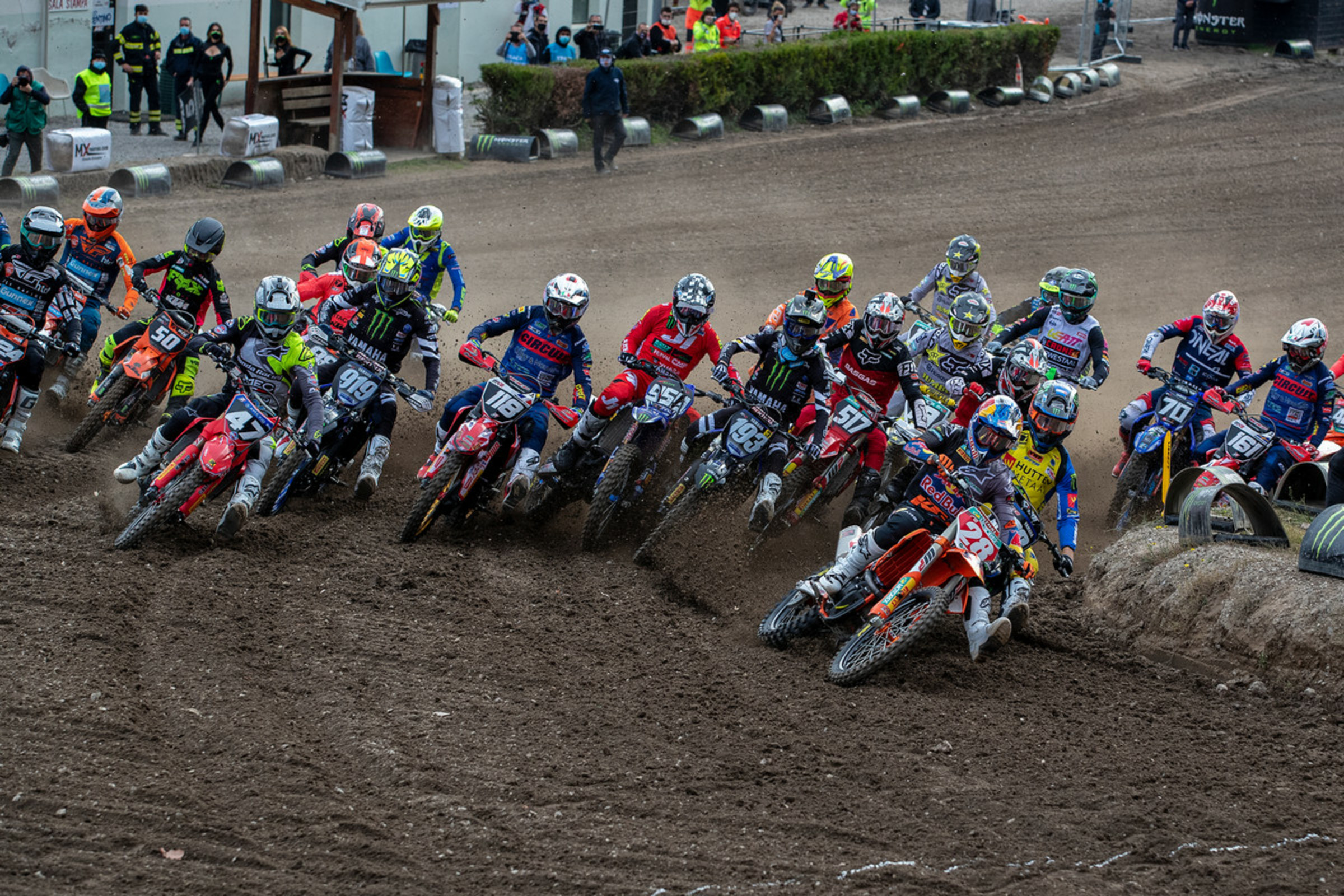 GP Report 5 Observations From the MXGP of Trentino

Cairoli and Geerts rally against their underdog status, Desalle finds classic form after announcing his retirement.

Red Bull KTM’s Tony Cairoli is used to a soundtrack of applause and shouts at Pietramurata. The 35-year-old has won at the venue on three previous occasions and thanks to his 2-2 on Sunday upped his win tally up to four, and 92 for his career. Without fans, the acclaim was missing this time for the 16th round of 18 in 2020 and for a result that kept the MXGP title within mathematical reach as Tim Gajser, who was second overall and won the first moto. Gajser surrendered just one point to his rival and still boasts a hefty lead of 73 with 100 remaining.

Cairoli’s first holeshot of 2020 at the launch of the second moto helped contribute to the veteran’s scorecard and his cat-and-mouse game with former championship foil, Monster Energy Kawasaki’s Clement Desalle, rolled back the years to the start of the decade when the pair used to be the reference in the class. Gajser, competing at the location of his very first Grand Prix win in 2015, had botched his start and had work hard to come back to fourth.

Trentino was missing plenty of Cairoli orange but it could also have been painted #243 yellow. This particular meeting has been a large draw for Gajser fans for the last half a decade (Slovenia is not an unreasonable distance) and the triple-header finale had initially been opened to a limited public gathering. With the acceleration of COVID-19 cases and the implementation of more restrictions and lockdowns nationally and regionally across Europe, the gates had to remain locked at Pietramurata. The circuit itself lies in an amazingly picturesque setting amidst the Dolomite mountains but is compact and frugal with space. It doesn’t take many thousands of fans to pack the enclosures and give the venue a decent buzz. With the absence of all but the remnants of the European Championship series runners gathering on the grass banks, MXGP again performed to a silent audience and TV cameras; a defining mark of 2020 and hopefully scenes that won’t be repeated in the second half of 2021.

“It’s not the same without public,” Cairoli admitted.

The Sicilian cut a forlorn figure in Belgium last week as he failed to hassle Gajser sufficiently. Pietramurata produced a more encouraging response and his tussle with soon-to-be retired Desalle produced a “throwback” dynamic.

“It was like ten years ago when we were fighting for the championship. We were riding fast today,” he said. “It was good to see him back to his best. I also want to say congrats for his career because we haven’t had the time to say it.”

The pair were allowed to run free after Monster Energy Yamaha’s Jeremy Seewer slipped out of the lead on the first lap. The Swiss ended up fifth overall behind teammate Gautier Paulin. Desalle’s teammate, Romain Febvre, was also error-prone and went down twice in the first moto. The Frenchman has impressively worked his way up to fourth in the championship despite missing the first two rounds with a knee problem, although he gifted 14 points to Seewer in Italy.

2. Mistakes for both MX2 front runners

Monster Energy Yamaha MX2’s Jago Geerts came to Trentino talking of 2021 and having had a mid-week test with the team in the search of bike improvements for the YZ250F. With a 74-point deficit to Red Bull KTM’s Tom Vialle at the top of the championship—and in the wake of a disappointing week in Lommel—his pessimism/realism could be forgiven. It was Vialle who bore the pressure in Italy.

Geerts rode well all-day to take the overall win, aside from a bike stall while at the head of the pack in the first moto that dropped him to fourth. Vialle gladly accepted second place behind the impressive form of Rockstar Energy Husqvarna’s Thomas Kjer Olsen. But it was the Frenchman’s turn to miscue in the second moto as he dropped the KTM at the end of the pitlane after leading 11 of the 19 laps and gave the chasing Geerts a clear track. Vialle recovered to go 2-3 for the day and take the second step behind Geerts who appreciatingly gobbled his fifth overall win of 2020, his 13th moto success (now the highest total of the field, one ahead of Vialle) and the confidence boost.

Vialle was seething with his gaff but quickly reverted from ‘race mode’ to ‘championship mode’ when it was clear he had only given away one point to his Belgian rival. Weirdly mirroring the MXGP narrative, the margin is 73. The on-track action scenes between the pair at the start of the first race and before Geerts’ mistake was edgy, very close and very watchable. Post-race Vialle revealed how he is splitting the mental demands of what could be a momentous week at the end of only his second season in Grand Prix.

“Last week I was thinking about the championship and also after the race today…but when I’m on the bike I am really focused,” he said. Geerts downplayed any hint of a late upset again by setting his sights longer term. “The championship is far away,” he lamented. “I want to finish the season strong, try to win these two GPs and think about next year.”

At least Geerts was able to confirm a top-two ranking for 2020; an improvement over his third from 2019.

3. The crumbs in the dirt

MX2 was tight. Just one point divided the podium with Olsen losing out due to Geerts’ checkered flag. The Dane is now up to fourth in the standings and just 16 points from Maxime Renaux in third. He could manage yet another top-three championship finish to cap a fourth and last season in the class with a brilliantly consistency. His final rank in standings read: 3-3-2 since 2017 on the FC 250 F. If only Olsen had not had to deal with wrist and neck injuries sustained shortly before the beginning of the season and then just before the restart in the summer then he could have easily joined Vialle and Geerts in this year’s title battle.

Olsen was one of four riders in a group split by only 38 points for the third and last spot on the champions podium for 2020. He gained ground on Renaux (fifth at Trentino), and passed teammate Jed Beaton (fourth) by one point. Winner of the last MX2 Grand Prix in Lommel, Ben Watson, was unlucky to crash hard in the first moto and then struggle with a mid-pack position at the start of the second. The Brit was eighth overall and is now 39 points adrift of Renaux.

Third in the MXGP category standings (and thus the credit and the bonus payments that goes with it) also still has to be settled. Gajser will be mindful of mistakes that could lead to injury and let Cairoli in for a dramatic sweep…but the KTM man has to defend as well as attack as he sits only 18 points ahead of Seewer who will be gunning for that second place and a repeat of his achievement from 2019.

Back in 2017 many doubted whether the competition could ever be as close as the two points that covered three riders at the end of play in France and fell in Kiara Fontanesi’s favor.

Dixon Racing Team Kawasaki’s Courtney Duncan defended her crown on Saturday in Italy with overall victory but tied on points with Yamaha’s Nancy Van De Ven (the Dutchwoman losing that ‘17 dispute so cruelly and finally in the French mud). The countback went to moto victories and the New Zealander’s five triumphs, one of which had come in the first outing at Pietramurata, was the clincher to the despairing Van de Ven’s three. The latter missed out on passing Shana Van Der Vlist by less than three seconds in the first moto; that fourth position instead of fifth would have been enough for the precious points to have made a difference.

As for Duncan, the 24-year-old consolidated her position as the world’s fastest female with a second crown on the bounce, and after coming back from a rough crash and DNF in Faenza that allowed her competitors to get closer than they perhaps deserved to be.

Clement Desalle’s first moto win for two years and first podium finish in 2020 came just over a week since Gautier Paulin also showed he had the necessary speed and skills to triumph in the premier class. The two riders recently announced their retirement and will vanish from MXGP at the end of the week. Although they are both long removed from championship contention (Desalle is seventh in the standings and Paulin is sixth) these two big names of the sport will be missed for 2021.

Desalle in particular could not contain his happiness in keeping Cairoli at bay in the second moto in Trentino. “That second moto will stay for me for a long time. I was leading and I thought ‘That’s such a nice feeling, it’s been a long time.’”

It’s odd that both riders have won in the same fortnight as declaring their intentions to stop Grand Prix racing, although Paulin did succeed at Lommel before making his announcement. In Italy they were both in the top four. These two are clearly not spent forces. The absence of their experience, style, and characters in 2021 will affect the diverse fabric of Grand Prix. In terms of replacements, Paulin’s slot at Yamaha has already been taken by Glenn Coldenhoff but the situation at Monster Energy Kawasaki is, puzzlingly, unclear. There are even some rumors that the factory team will run in 2021 with only Romain Febvre.

For MXGP next year, from the MX2 class only Thomas Kjer Olsen and Ben Watson are confirmed as incoming (due to both hitting the category’s 23-year-old age-ceiling) but what of some other staple figures in MXGP? What fate lies in store for the likes of Alessandro Lupino, Arnaud Tonus, Ivo Monticelli and even Jeremy Van Horebeek? Three of those riders circulated in the top ten of the first MXGP moto.

It seems there could be more than just final championship positions decided in Italy this week.