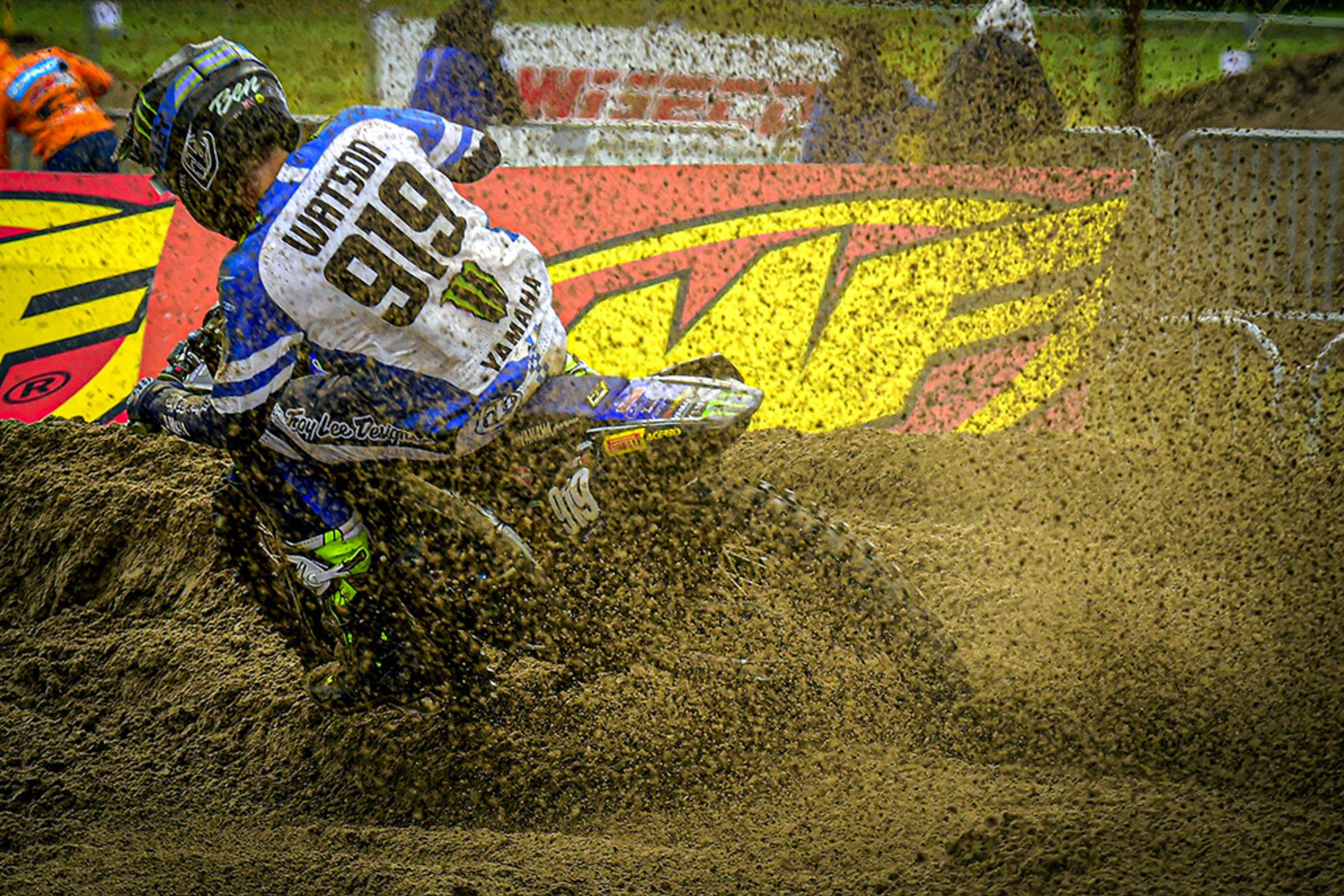 Straight outta Nottinghamshire, England, it’s been a frantically positive couple of weeks for Ben Watson, the 23 year-old the Monster Energy Yamaha Factory MX2 Team competitor. First came the Englishman’s first career Grand Prix win at Lommel, Belgium on October 25, and a few minutes afterward, the announcement that he would be joining the Monster Energy Yamaha Factory MXGP squad for 2021. Watson will now turn his attentions to this weekend and the first of the final three Grands Prix of the 2020 season set to run on the hardpack of Pietramurata, Italy. “After Lommel I am of course feeling good,” said Watson on Thursday. “It’s been an emotional week but it’s time to focus on Italy.” And that’s where we found Ben when it came time to do the interview you’re about to read: In an automobile and driving pell-mell towards Sunday’s MXGP of Trentino. Currently slotted-in at sixth in points in the MX2 World Championship, Watson is hoping to leave Italy as the P5 man in the final FIM MX2 World Championship standings, as well as Great Britain’s next FIM Gold Medal hopeful.

Racer X: Okay Ben. Thanks for taking the time to do this. First and foremost, congratulations on winning the first Grand Prix of your career as well as landing the ride with the Monster Energy Yamaha Factory MXGP team for 2021.
Ben Watson: Yeah, thank you very much. I’m really happy to get that. It couldn’t have gone any better, to be honest. It’s a real amazing opportunity. I was real happy with that. Especially now with the COVID-19 situation at the moment. I think it’s a difficult time for everyone isn’t it? So I was grateful to get that opportunity from Yamaha.

Come this Sunday and the week beyond, you’ll be competing at the Arco di Trento circuit in Italy. What do you make of that place and the track itself?
Arco, yeah, the place is cool and the scene around the track is real nice. It’s going to be a shame there will be no spectators, but yeah, it’s a cool track.

What’s it like going to these races where everything is locked down and, for the most part, there are no spectators present and hanging off the fences?
Yeah, it’s real strange. Especially when you go to a race like Belgium. Lommel, those races were five minutes from my house. The whole atmosphere with all of this is one in the same. Normally, the Lommel GP, for the UK fans, is one of the closest races to travel to. Normally, it is like my second home GP and I now have three podiums in a row there. No one was there to see it. Normally, I have quite a big following at Lommel, but everyone watched it on TV. It’s not the same.

Last Sunday at Lommel was officially your 69th career Grand Prix start and you went out and won the first GP of your career. That had to be a total rush for you, eh?
Yeah, it was incredible. I mean, when you look back on your career and you think, “What was going through my mind five years ago?” I really didn’t know where I would be at this point and you look back on all the injuries and the times things weren’t going good. When you get a win like I did, it makes everything completely worth it. It was a real emotional day. When I won the first moto on Sunday, it was a real big achievement for me and then I said to myself, “One more thing I need is a GP win and I’ll be thrilled.” When I got it, it was more than I expected. The feeling was unbelievable.

Your family and friends had to be excited for you.
Oh yeah. Big time. There were so many people, friends, family, people you’ve never heard of! My phone blew up. That was a big part of it. It was amazing to see how many people actually follow me behind the scenes. It was all real nice.

This weekend marks the end of what has been an extraordinary and extraordinarily odd MXGP World Championship season.
Yeah, so this is going to be the last tripleheader. So we’ll race on Sunday, Wednesday and next Sunday. That’s going to mark the end of the season. I think it has been quite a jam-packed season. I still feel strong and I still feel good and motivated. I’m not getting tired of riding or training or anything like that at the moment. I’m actually enjoying it more now than before. Obviously, when you’re getting good results, everything is easier.

What are you hoping to have happen or materialize at these last three Grands Prix before heading home for the winter months and off-season?
Obviously, with the GP win I’ve achieved a massive goal in my career. When I was doing the second heat after the first heat at Lommel, the last few laps of the moto and when it was becoming a realization that if I just stayed where I was that I was going to win my first GP, I was really tense and I rode really tight. It was a strange feeling; I wasn’t free. Now, I feel like a big weight has been lifted off my shoulders and I think it’s going to be easier to be successful now. Now I just want to enjoy it and not stress about having a bad race or something because sometimes I put a lot of pressure on myself and sometimes I don’t enjoy it. If I just go to a race with no pressure and with no expectations and just to have some fun, it’s almost certain that my results will be good when it’s like that. Yeah, that is the goal: Just to have fun and to ride like I know I can. When I’m having fun, I do good normally.

Are you looking forward to the off-season?
Yes, definitely. Luckily, the team I’m moving to is very close to where I’m living and where I’ve been around. It’s going to be more where I have a couple of weeks rested up and then, yeah, I’m going to get on the 450 and do some testing. I’m not going to have as big a winter on the 450 as normal because this season has gone later, but I’m staying with the Yamaha and working with guys that I’ve already had a little bit of experience with. It should all be good.

What’s your take on who will be your competition in the 450cc class come 2021? When you look at racing a Tim Gajser or Jeffrey Herlings or a Romain Febvre in MXGP in 2021, that’s an entirely new and different reality.
Yeah, definitely. I actually don’t know what to expect at the moment because a lot of people move into the category and say, “Man, this class is so brutal. The guys are so fast.” From fifth to fifteenth in this class, there is not a lot of difference because everyone wants it so bad. Luckily, I train quite a lot with [Romain] Febvre. He’s had a lot of experience and he’s been a World Champion and won multiple GPs. It’s nice that I’m going to have a few guys around me like that. Obviously, being teammates with Jeremy Seewer will be also be very good. Again, I just want to try to learn as much as I can in the first year from the guys around me and not have too much of an expectation. I don’t want to go there and say, “I want to get at least three podiums in my first year!” I don’t want to do that. I just want to head into the new season and learn as much as I can from it and everyone around me and then the results will be what they will be.

A lot to look forward to come the drop of the starting gate on the 2021 MXGP season, isn’t there?
Definitely. I think more people from home have congratulated me on my ride for next season than people who watched my result from the past weekend in Lommel. So many people know that I can ride a bike good and am capable of finishing on the podium. Getting this ride for 2021 was so good. Everyone knows it is one of the best teams in the paddock and one of the most professional in the paddock, I’m sure. To look from the outside to the Yamaha Factory MXGP Team, it’s unbelievable and it’s the kind of team that everyone as a kid dreams to ride for. Hopefully the younger generation from the UK can look up and see that everything is possible because I was, only a few years ago, a kid at home in the UK racing a 65 in the local championships. I think it’s nice for everybody in the UK to see that this is possible.