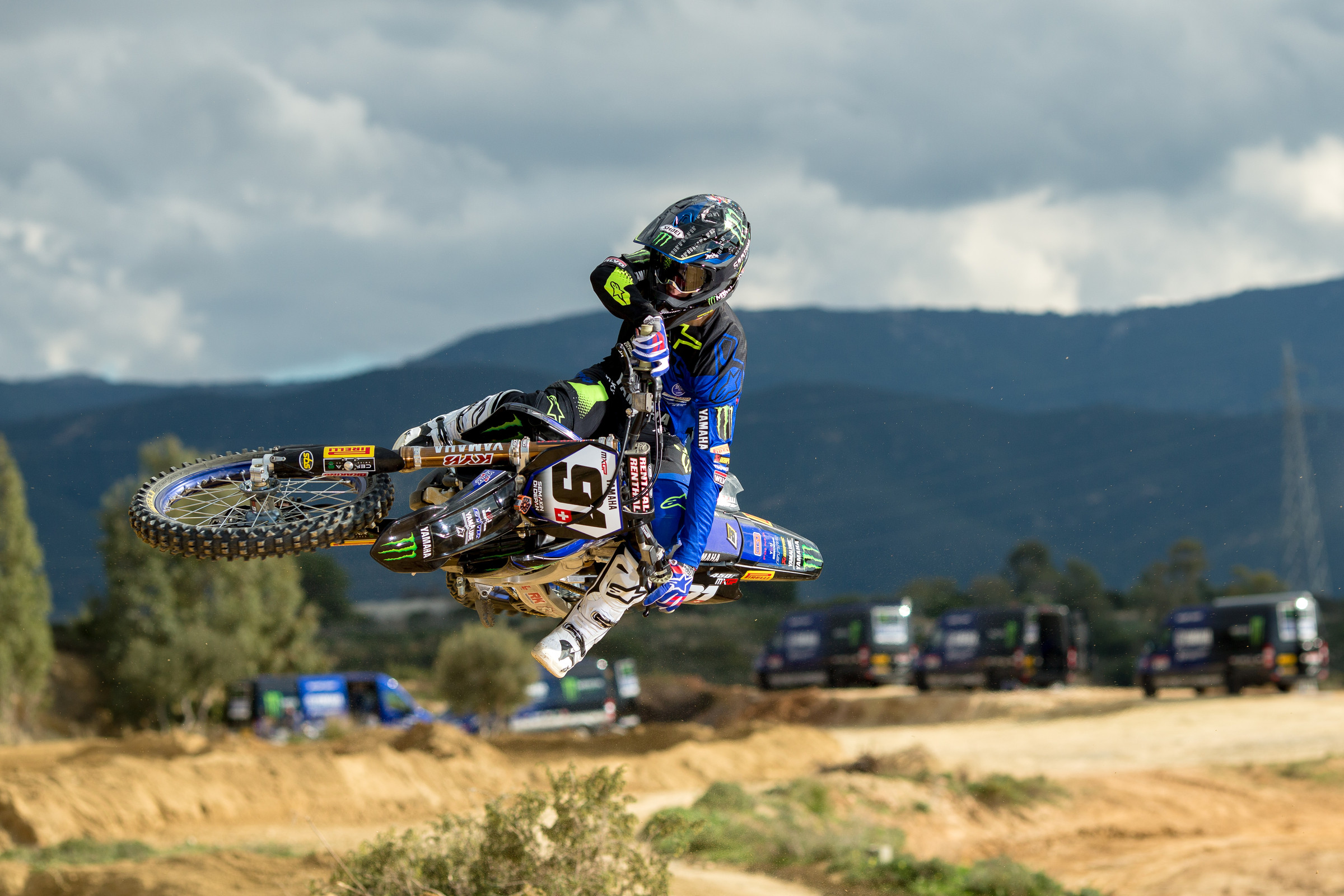 On Sunday, September 27, 2020 Jeremy Seewer won the MXGP of Lombardia and in doing so became the first Swiss rider to win a Grand Prix in the premiere MXGP classification in the 63-year history of the FIM Motocross World Championship. Read the Web24.news website, “In Faenza reigning vice-world champion, Zurich’s Jeremy Seewer became, on the ground of Faenza, the first Swiss rider to win a round of the MXGP world championship in the premiere category of world cross.” Runner-up in both the 2016 and 2017 MX2 World Championship, last season, this time in the 450cc-based MXGP division, Seewer was, yet again, runner-up in the World Championship. Which brings all of this to the first of November 2020 and the MXGP of Trentino set to run at the 1550-meter Crossodrome Ciciamino circuit in Pietramurata Italy. In what will be a tripleheader Grand Prix (the last two GPs of the 2020 MXGP season will also run at the same venue next week), Seewer, age 26 and a member of the Monster Energy Yamaha Factory MXGP team, hopes to improve upon his current third place position in the MXGP point standings. A mere 10 points adrift of second place pilot Antonio Cairoli, Seewer just might see himself as an FIM vice-world champion for the fourth time in his career (as Marnicq Bervoets of Belgium was in 1995, 1996, 1997 and 2000). In the home stretch of what has been the COVID-19 sabotaged 2020 FIM Motocross World Championship, Seewer, who has landed on the podium four additional times in ’20, wants to leave Italy with an FIM Silver Medal. Having finished up track walk for Sunday’s MXGP of Trentino, Seewer was in something of a talking mood when we rang him this afternoon. Check it out.

Racer X: Jeremy, thanks for picking up and doing this interview with us. The MXGP of Trentino is here. Just where are you at and just what are you up to?
Jeremy Seewer: No problem at all! Today, I’m quite relaxed. I’m actually now in Italy and at the racetrack already. It’s really weird. I mean the COVID situation is getting really bad all over Europe again. It’s weird here. It’s really quiet. Racing will be happening on Sunday, so when the gate drops nobody really thinks about COVID. At least the guys on the bikes don’t think about it. Honestly, I don’t put on the TV because I’m sick of hearing about it all. I just do my job and do what I love to do and I do what I can do. I don’t want to hear it 24/7. I just turn that shit off and relax, you know?

Sort of like what I do with this Donald Trump and Joe Biden election over here in the United States of America…
Yeah, I get that. That’s a big thing over there. Even here in Europe, they show that stuff on TV every day, actually.

Lucky you! Well, we’re much more concerned with the sport of motocross this weekend, aren’t we?
Yeah, that’s better.

You’re a close third in points, won your first MXGP Grand Prix and were always in the mix and fighting at the front this season. All things considered, a good 2020?
Yes, not with everything, but with most of the things I’m happy. I mean I’ve had some amazing races. I’ve been battling with the best motocross riders in the world. This is a huge thing in my career. Okay, I also had some DNFs and some crashes and some of other things I can’t be that proud of, but overall, it’s been going well this year.

Three of your MXGP contemporaries, namely Thomas Covington, Clement Desalle and Gautier Paulin have announced their retirement from the sport in recent weeks. Crazy, huh?!
Yeah, exactly, you know? I mean that’s a question I haven’t been asked before. It is so competitive and now it’s kind of a new generation. Change is happening. Maybe it is young talent coming up and some the older guys, who are actually all super-good, are seeing this. Clement Desalle is still a good rider and [Gautier] Paulin is still a good rider, but it’s getting tough for them. Then there is the COVID situation and now this together makes it really tough to get a ride in MXGP and to get paid good money. These guys are saying now, “Okay, that’s it.” I know here in MXGP it’s getting so tough and the good spots, the factory riders are becoming less. And the well-paid spots are even harder to find. That’s what is happening right now. The MXGP class is incredibly competitive with so many good riders. There are World Champions, young guys with a lot of talent, it is just full of fast guys, you know?

What do you make of this hardpack and stony race circuit you’ll line up on Sunday as well as next week?
I like the track, for sure. I’m just going to take it race by race. I mean, it is one week of racing which is normally nothing, but it is three GPs, so that all normally happens over a month. It’s going to be tense again. I just want perform at my best again and show these guys I’m not here for jokes. I want to try to be on the podium or to even win a GP. That would be awesome to finish off the season like that.

You’ve made it quite clear in a number of interviews I’ve read of late that you’re just not going to be happy until your winning Grands Prix on a very regular, consistent basis. True?
Yeah, exactly. I mean, okay, I’m not unhappy to be where I’m at now, but I feel like my potential, and if everything goes together well, I can be on the top. This year in the World Championship [Tim] Gajser is ahead on points, but I still try to better and better and I want to be great. That’s what I am working towards.

Once these last three Grands Prix run here in Italy and the curtain comes down on this bizarre 2020 season, how are you looking at your off-season?
First of all, we’re going to get some testing done straight after these GPs. We want to try and improve things for next year and to try and focus on the engine and chassis. After that, we need a break. It’s been such a tough season and it has all been just super-intense. Especially mentally. My body is fine and my physical condition is fine, but mentally, to race that much, it is super-tough. With the off-season, I’ll try not be on the bike for a bit and to try and do some other things that I’m able to do with the COVID stuff. I’ll try and get some holiday time in. But after all of that, I want to get back to work. I want to try and improve my body step by step. I want to build up my endurance and my physical strength. I’ll go training with the bike. I just want to try and put the puzzle together again for the next season. The competition is there and it is the future. Tony Cairoli is a super-good rider, but he will not get younger anymore. Okay, he will always be there, but he is already one of the oldest riders out there. This will not help him, of course, but you always have to count him in on race day somehow. For the rest of the competition in 2021, it’s going to be Tim Gajser, Jeffrey Herlings, when he is back super-strong and healthy, and one of the most dangerous guys will definitely be Jorge Prado. These guys are the real deal. Romain Febvre is also strong. These guys will all be strong and they will really be the guys to beat in 2021. Then there are five other riders who are almost as good, but just almost.

Switzerland has been part of the FIM Motocross World Championship going all the way back to the late 1950s. Have your countrymen taken notice of your travels in the MXGP World Championship?
Yeah, in the past Switzerland had some very good racers and races. We had three GPs in Switzerland, in 2016, 2017 and 2018 when I was at the top of my MX2 game. The races were amazing. The effect the events the events had on the sport in Switzerland was incredible. The spectators we had, the atmosphere we had, just everything we had was great. Even today, many people talk about those Swiss GPs and how amazing they were. The races were on another level, It was crazy. The sport gets attention, but in Switzerland a sport like motocross is still pretty small. That’s how it is. But check this out. This Sunday, and I think for the first time in history, Swiss television will show the full MXGP races on the main Swiss television network. That’s a huge thing, you know?

It certainly is and now you must go out there and do good!
Yeah, I will try my best for sure!