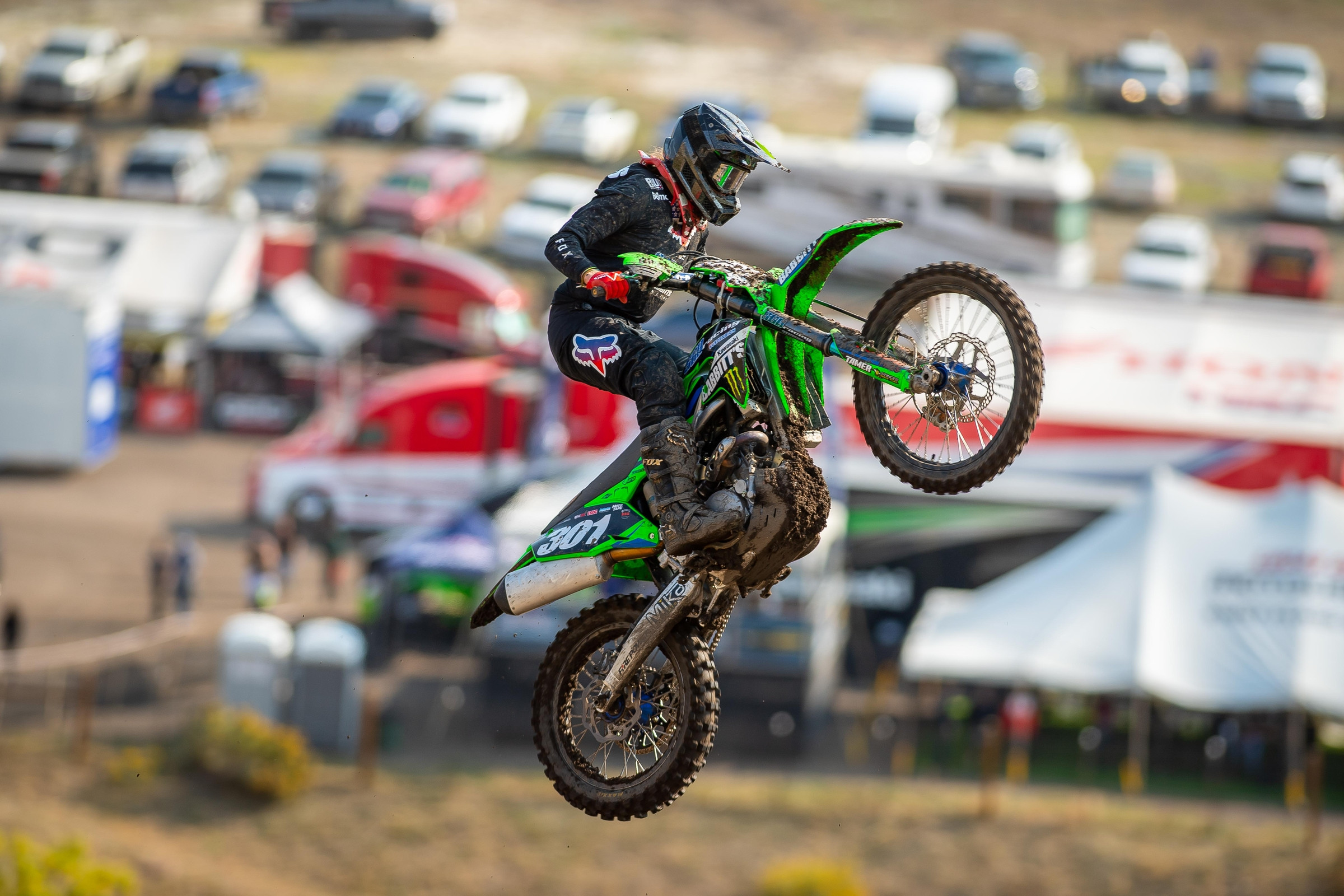 By now you know who Jordan Jarvis is, and if you don’t, go watch the second 250 moto from the Florida National, or either 250 moto from the Fox Raceway National. The SGB Racing/Maxxis/Babbitt’s Kawasaki rider made history by becoming the second female racer to compete in the motos in the “modern era” of the series—the only other being Doreen Payne in the 500 class of the Denver National in 1983. Now that Jarvis has got a taste of what racing is like at the highest level, she’s gearing up to make another go of it in 2021. We caught up with Jarvis to chat about what it was like finally realizing her dream, being a female in a male-dominated sport, and what the future may hold for the determined racer.

Racer X: Jordan what’s up, what have you been up to since the nationals came to a close?
Jordan Jarvis: After Fox Raceway I hit another race, [The MotoPlayground Race at] Ponca City to get some more time, this year has been kind of slow. Since then I’ve just been taking a little break, getting ready for the next season, and changing a few things up. I’m mentally preparing myself for some harder workouts, stuff like that.

What was it like when you finally got in the motos for a national? You were trying all last year too. What was it like when you were finally on the gate watching the 30-second board go sideways?
It was insane. Growing up I’ve always wanted to race a pro national, and I’ve always felt I could do it. I thought it was possible to do it this year, but it’s one of those things where you don’t know it’s going to happen until it actually happens. I definitely felt really good at Fox Raceway and was extremely stoked when I got to go up there on the line. Just to be up there, to be out there racing with all those guys, is a feeling that can’t be replicated. It’s unbelievable. Everyone has been asking me if it’s been stressful, but I think the most stressful part of the day, at least for me, is qualifying for the main [program]. Once you get there it’s extremely freeing. I’m not really racing for a specific position, I’m just out there to ride my best and enjoy my time out there. I don’t think I’ve ever felt that joyful being on a bike on the track like that, it was just insane. There weren’t as many people as there normally are at a national, but even just seeing those people cheering, and getting to be on the line with past and future champions, stuff like that is just insane.

What was it like at Fox Raceway when that lead battle came around?
It was crazy. Normally I’m sitting on the sidelines watching. When they came past me I was trying to take mental notes, trying to remember who was up front so I don’t get in the way. I also wanted to pay attention so when I pulled off the track I could have an idea of who won, and that kind of stuff. It was just crazy. There were a ton of battles and I was just trying to do my best to keep from getting in their way without losing a ton of time. That’s very difficult, it’s a lot harder than you might think.

You’ve gotten lot of attention doing what you’re doing. Are there times when you wish people would look at you and see Jordan Jarvis the racer, versus Jordan Jarvis, the female who’s racing against the guys?
Yeah. There’s a little bit of added pressure when people look at me. I know there are a ton of girls and women who look up to me and are supporting me through everything. Even though I may not know all of them, they’re still there leaving my comments on my Instagram and all that, and I feel like I have to ride my best all the time to show everyone else that it is possible. And I’m not just a female out there trying to race with the men. It definitely brings some good exposure, but unfortunately it also brings some bad exposure. There will always be people out there hating on you, that kind of thing, and it’s unfortunate when people do that to me, especially other females. Realistically, it is awesome that I’m a female out there doing it, but my goal is just to make a career out of it, like everyone else. I’m not really out there doing stuff to be the first girl to do it, or anything like that. I’m out there to do it for myself.

You talked about people hating on you. What do you mean?
There are people out there who say the only reason I get exposure is because I’m a girl, stuff like that. And they’re not entirely wrong. I am getting a lot of exposure because I’m a girl. But then again, throughout the amateur ranks, I didn’t get nearly the attention the guys did, because I’m a girl. It’s a tossup.

That’s a great point, I’ve never thought about it that way. That’s an interesting side of the coin.
It’s tough to be a girl racing, especially on the amateur side. Once you get to the pro side, you know you’re there for a reason, that you can battle with the men, but on the amateur side of it, we really don’t get much. I have five titles at Loretta’s I believe, and if I’d won that much as a guy I’d have a full factory ride, six or seven bikes, all that kind of stuff. I never got that, and it’s not just me, either. There are several other women who’ve won just as much as I have and they don’t get anything either. It’s kind of a stigma for women. I guess people think we create issues. And, some women in the past have. I guess sponsors and manufacturers don’t see women having a terribly long future in moto. I’m not sure, but it does make it very hard on the girls coming through the ranks. It hurts them. They don’t have a lot of reason to keep pushing if they’re not getting anything in return.

What do you see as a solution to that?
You know, it’s tough. I don’t think there’s just one solution that fixes it. I definitely think if we could get some more women doing what I’m doing, racing nationals and stuff like that, making main events, that’d be a good place to start. Unfortunately when manufacturers and sponsors get burned once, they tend not to go for the same thing again. That makes it very hard to change their minds. There are a lot of fast women and girls coming up right now who I think will be capable of making main events, and they need to stay strong and keep pushing to get to this point. I think that will help. I think the more connections I can make in pro motocross the more it will help as well. Let’s say we brought back the WMX. The reason there’s no support for it is because it’s not on pro day. Back in the Ashley Fiolek days, I think the reason Honda, Kawi, Yamaha, and everyone like that were so willing to help was because WMX races were on pro day, and they got some TV time. I think if it got back to that, or close, even just one moto, I think that would help a lot.

Going back to the gender question, on the flipside of it, it’s got to feel good knowing you’re inspiring so many female athletes. How many fans have come up to you since Florida, or even before?
It’s been absolutely insane. Not many have actually come up to me because the series didn’t allow fans in the pro area this season, but I’ve gotten thousands of followers on Instagram since WW Ranch and Fox Raceway. There have been so many DMs, people saying, “Thank you for what you’re doing, you’re an inspiration. You’re the reason I want to start riding,” that kind of thing. That’s part of the reason I push so hard. I want to keep making sure women and girls see that it is possible, to do something like I am and hopefully keep them from getting discouraged.

What’s 2021 looking like for you? Do you have any plans yet?
I’m definitely for sure doing the pro season in motocross next year. I’m not sure if I’m going to do supercross or not. I want to make sure that when I do, I’m 100 percent ready for it. At the moment I’m not, and that’s just because I don’t have a lot of time with it. In the next few months, I’m going to put in some work on supercross tracks to see if I can make myself ready in time. If not, I might go over to Europe and do some of the women’s GPs over there. But I’ll definitely be doing the motocross series. We’ve got some big things coming up in the future, we just have to make sure everything works out.