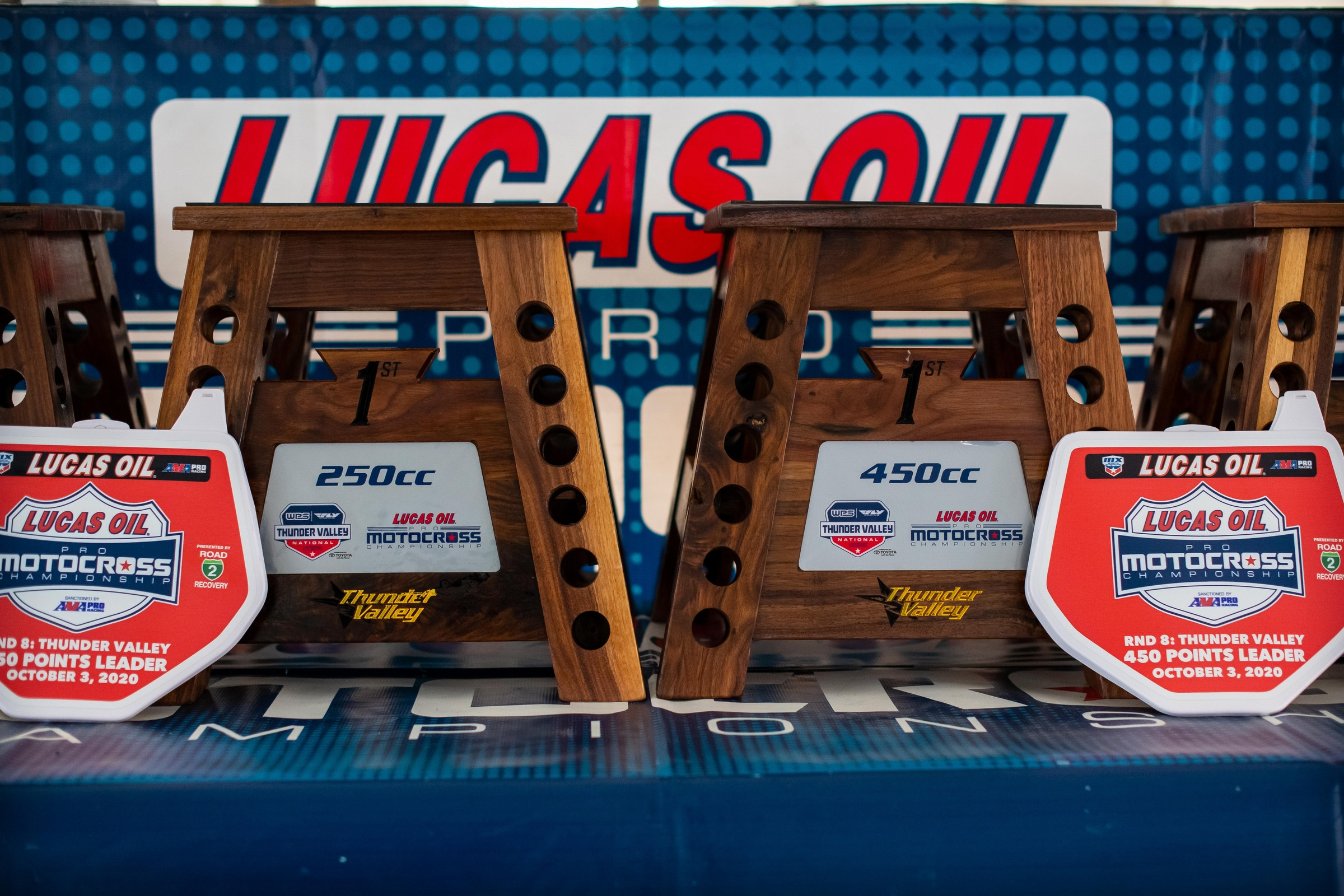 Elation and heartbreak. You can’t wrap a season of Lucas Oil AMA Pro Motocross without them, and when the 2020 season all comes to an end this Saturday at Fox Raceway, there’s going to be plenty of both. The only question is, for who?

The obvious favorite here is Zach Osborne, and for good reason. There are three other racers still in contention, but Osborne has a healthy points lead on all of them. He’s got 24 points on Adam Cianciarulo, 42 points on Marvin Musquin, and 47 points on current champ Eli Tomac. With a buffer like that you’d have to be pretty stupid to bet against Osborne coming into the finale. In fact, if he finishes ahead of each of those riders in the first moto, he’ll clinch the thing a whole moto early! But what if he doesn’t? What if he gets a flat tire in a moto, or his fuel pump stops working seconds before the gate drops?

You can be sure Osborne’s Mechanic, Dave Feeney, will have gone over Zach’s bike with a microscope approximately 7,884 times before the first gate drops at Fox Raceway, but you just never know what might happen. Just ask Musquin, who lost his shot at racing for a 250 National Championship at the finale in 2015 when a mechanical problem ruined his first moto! So, if for some strange reason Osborne fails to score points in the first moto, and Cianciarulo wins, Cianciarulo would go into the second moto leading Osborne by a single point. This is the last thing Osborne wants. True, he’d only have to get a single point back from Cianciarulo to win the title (the tie-breaker would go to moto wins—Osborne has six moto wins to Cianciarulo’s four entering the final round—and the tie breaker for that if AC would go 1-1 and they tie in points is the rider with the most second place moto finishes—Osborne has three second place moto finishes to AC's one second place moto finish), but that’s by no means a sure thing, especially considering Cianciarulo has shown the speed to beat Osborne at times.

The only one who benefits if Osborne gets hurt and can’t race is Cianciarulo. Well, most likely, anyway. Eli Tomac would have to go 1-1 and gain 24 points on Cianciarulo to win this title (a 1-1 moves Tomac ahead of Musquin no matter what), and that’s pretty unlikely to jump that many riders and that many points in one day. It’s almost as unlikely for Musquin, who’d have to score at least 43 points (a 1-4 or 2-2, for example) and make up 19 points on Cianciarulo. Not happenin’. Cianciarulo, on the other hand, would just need to score 25 points total on the day to overcome Osborne if Osborne scored zero. We’d imagine Adam could probably score 25 points over two motos with his gear shifter tied behind his back.

Unless you’re expecting Monster Energy Kawasaki to replace Tomac’s brake rotors with table saw blades and pull some kind of Mad Max maneuver on Osborne, there’s not much to talk about here. Even if Tomac gets between Cianciarulo and Osborne, costing Osborne a couple points, the number lost is negligible compared to Osborne’s lead. If Osborne has a disastrous first moto and loses a ton of points to AC, then who knows, maybe Tomac might develop some strange clutch problem while leading, but don’t count it.

And then there were two—Dylan Ferrandis and Jeremy Martin. Things are a little tighter here than in the 450 Class, but not by much. Ferrandis leads Martin by 18 points, which gives him some wiggle room. He doesn’t have to win, or even finish on the podium, but he can’t get too cavalier, either. A 5-5 from Ferrandis, paired with a 1-1 from Martin, puts the two in a tie, but the rule book says moto wins serves as the tie breaker, and even with a 1-1 Martin would have six moto wins to Ferrandis’ eight. So a tie doesn’t work, Martin needs Ferrandis to go 5-6 or 6-5. Of course, a look at the results shows that Ferrandis is unlikely to finish fifth, even if he crashes. He’s finished seventh once, fifth once, and fourth once. He’s been on the box in every other single moto, with his average finish so far this season coming in at 2.3125. In other words, enthusiastic high fives between TLD Red Bull KTM team manager Tyler Keefe and just-left-the-TLD team Nate Thrasher this weekend are more likely than a 5-6 from Ferrandis.

History hasn’t shown the Monster Energy/Star Racing/Yamaha 250s to be very unreliable. Sure, there have been moments here and there, but every team has bike issues from time to time. If one pops up for Ferrandis on Saturday, it could prove costly. For example, in the first moto, if Ferrandis gets a flat tire or his bike starts smoking and he has to take it easy, let’s guess he finishes tenth. Let’s say Martin takes second, just to break from the constant “Martin wins every moto” scenario. Heading into the second moto Ferrandis’ lead would have shrunk to seven points, so if Martin were to win the second moto, Ferrandis would need third or better to seal the deal. If Martin were to take second in moto two, Ferrandis would need a fifth or better. As you can see, this situation doesn’t paint a good picture for Martin’s title hopes.

For a mechanical situation to give much hope to Martin it’d need to be catastrophic for Ferrandis, which would cause a huge points swing, provided Martin could capitalize. If Ferrandis’ bike broke and Martin took fourth, they’d be one point apart, setting up the two-wheeled death duel of the decade for moto two. In the first moto, combine anything better than a fourth for Martin with a DNF for Ferrandis and the GEICO Honda rider takes over the points lead.

Nobody wants to win a championship because their competitor got hurt, but it’s happened before and it’ll happen again someday. In the current situation it’s pretty straightforward—if Ferrandis gets hurt and can’t ride the title is almost assuredly Martin’s. He’d only need to make up nineteen points over the course of two motos, and if you think Martin would struggle to go 11-12 and collect nineteen points you probably shouldn’t ever bet money on this sport. The main thing is, Martin absolutely cannot afford to let Ferrandis grow his lead to 25 points in the first moto. If Martin is still in the hunt in the second moto, and Ferrandis crashes out, just like Christophe Pourcel did in 2010 (he crashed and got injured in the first moto at Pala), Martin can bring home the championship with a strong finish. This is an extremely unlikely situation!

With Monster Energy/Star Racing Yamaha fielding approximately 34 bikes in the 250 Class, all of which seem to jump to the front following every single gate drop, this could be a real situation. Not in the sense that they’re going to knock Martin down, but odds are he’ll have to go through at least a few blue bikes on his way to the front. Remember, Martin wasn’t able to get around Justin Cooper last week, and with a title on the line, don’t expect the Star boys to roll over for Martin at Fox Raceway. Really, no rider gives up podium positions without a fight. If the points tighten up after the first moto, a sea of blue could play a definitive roll in the second moto.