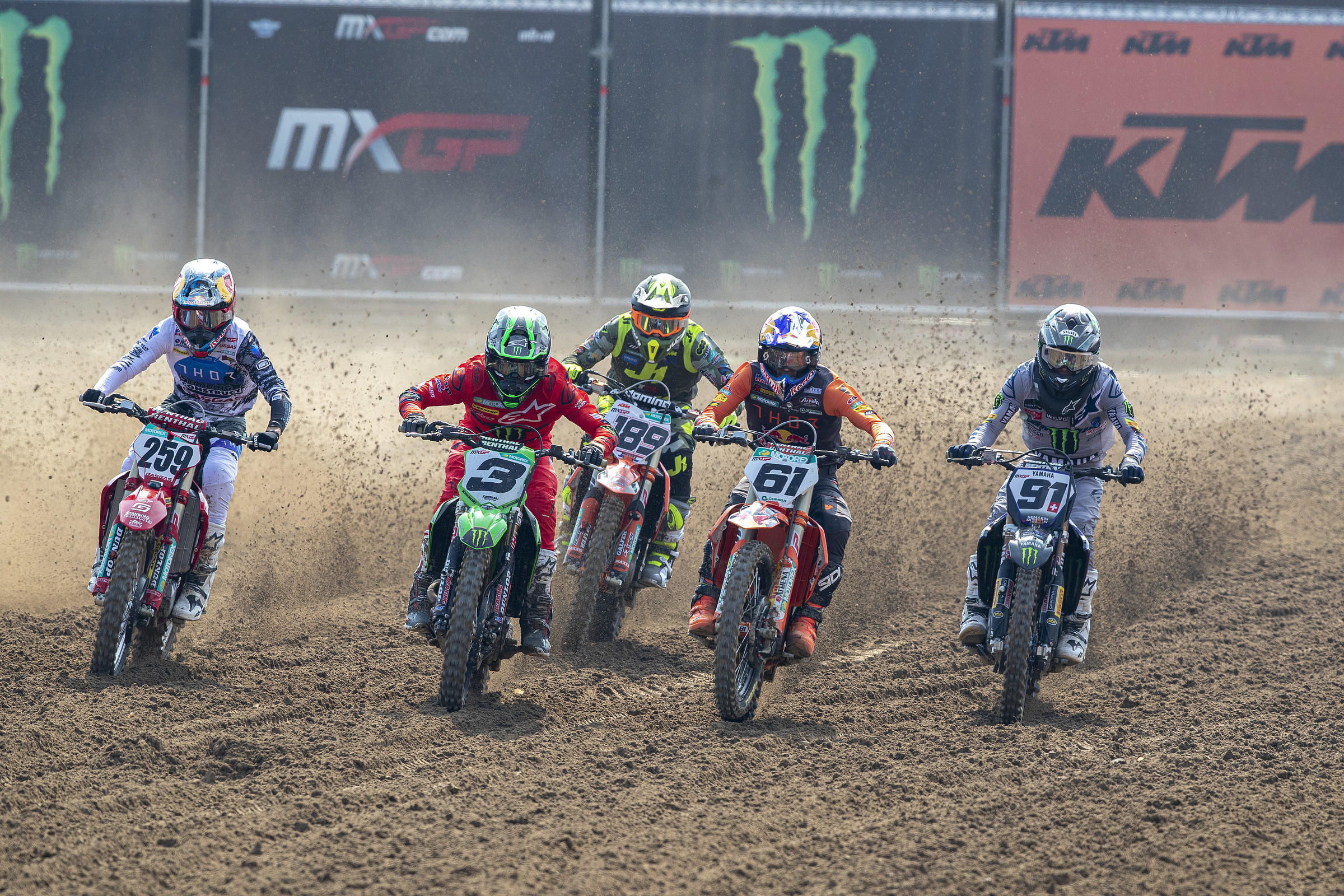 The second dash on the Tazio Nuvolari sand in four days threw up the sixth different MXGP Grand Prix winner from ten rounds this season. Here are some observations from the latest outing in Italy.

There were minimal changes to the compact and sandy layout where line choice existed but passing places were limited, especially between the top groups in both MXGP and MX2 that were split by tenths of a second in the lap-times. Results were decreed by the strength of a rider’s start (Red Bull KTM Jorge Prado and Monster Energy Kawasaki’s Romain Febvre took the holeshots respectively and owned both motos) and key mistakes (Monster Energy Yamaha’s Jeremy Seewer flipped off the track in the second moto and ripped the tail end of the YZ450F away; props to the Swiss for continuing on for ninth place but his second position from the first moto could not be fleshed-out for another podium finish).

Febvre’s 3-1 represented his first checkered flag and first overall win for Kawasaki since joining the factory team at the end of 2019 and having decided that five years in Yamaha colors were quite enough. The Frenchman gave the Dutch crew their first success since the Russian GP in 2018, when current teammate Clement Desalle was the only rider to disturb the Jeffrey Herlings/Tony Cairoli duel that season. It was a confidence boosting performance by the former 2015 world champion who last stood on top of the box in the summer of ‘19, shortly before breaking his left femur.

Febvre was frustrated with a sixth position overall last Sunday. On Wednesday he rode well but was deftly handled by Seewer in the first moto in what was another exercise in desperation to find an overtaking opportunity. The 28-year-old took matters into his own hands in the second moto and never looked back. Febvre’s season is rising up after a limp start when a knee injury counted him out of the first two Grands Prix and other mistakes held him back. He’d become a perennial top five/six rider and classified fourth overall on at least four occasions. The bright launch in Mantova is the first hint that the feeling with the KX450F is starting to ripen.

Jorge Prado was stripped of his victory post-race on Sunday and that fueled the young Spaniard’s desire to dish-out some payback three days later. His first moto win came off the back of a resolute defense against Seewer and across a track that had been flattened after the European Championships and WMX the day before. The course still churned into a litany of sharp bumps and was hard to handle. Prado bagged his second win of the season and is one of eight racers to have banked 25 points in 2020. One of those was the absent Arminas Jasikonis. The 23-year-old Rockstar Energy Husqvarna was still being kept in a medically-induced coma in Cremona after his life-altering crash on Sunday. ‘AJ’ was rightfully at the front of everybody’s thoughts, even if racers do what they often do best and ignored all realization of the peril they face on the same track and with the same conditions. Luckily, the Husqvarna camp provided great news on Wednesday morning that AJ woke from his medically induced coma and “was quickly able to recognize and talk with his family and the exceptional medical staff around him, both in Lithuanian and English.” Husqvarna also said Jasikonis “can also move his body unaided, is in no pain and despite being understandably tired is thankfully over the worst of his injury and can soon start his rehabilitation.”

The second moto presented a curious case study: how would Prado handle a start outside of the top five? His KTM 450 SX-F had been barged off-line into the first corner and almost crashed into Febvre. That put him just inside the top ten. Prado showed his skill and mettle by attacking almost instantly and was up to fifth by the end of the first lap, where he rested in a position to seize the overall. He briefly stalled the KTM and that dropped him to seventh. By the flag he was one second from teammate Cairoli in fourth (the asthmatic Sicilian going 4-4 and much better than he expected after breaking his nose on Sunday and being concerned about his breathing), Prado could have eyed third if it wasn’t for the error. The fifth podium from ten rounds, and the fourth in a row, has pushed the rookie up to fourth in the championship and just 35 points from the top.

3. Not Too Premature For Paulin

With names like Seewer, Prado, Gasjer, Jasikonis, and Mitch Evans haunting the top element of MXGP there is a feeling of the ‘new generation’ invading the class at present. Long-established hands like Clement Desalle, Jeremy Van Horebeek, Arnaud Tonus (ruled out once more due to a concussion: is there a more stylish but also unluckier rider at international level?), Evgeny Bobryshev (yes, still riding and still scoring good points even after that crash on Sunday) and Gautier Paulin are slipping back away from podium contention.

Paulin, Team France’s golden talisman, railed against the notion by finally matching a good start and mistake-free outing in the second moto to finish second behind his countryman. It was the first top three by #21 this season. After dealing with a broken thumb and a spate of falls in races during his second term back in Yamaha colors, this was more worthy of a rider of his technique and application. Yamaha have still to confirm who will be Jeremy Seewer’s principal teammate in 2021. Paulin’s reminder of his talent may have come too late for the decision-makers in blue, but it served to remind MXGP that he can still hack the furious pace that marks the class.

“I was not really happy with the way my suspension was working and the track was a lot different, so we made some changes for moto two,” explained the racer, who has represented factory Kawasaki, Honda, and Husqvarna teams, and after a botched getaway in race one only led to a 10th despite some quick riding. “I then had a good start and was able to ride with the guys up front from the beginning. I was just enjoying the moment and enjoying my riding. My flow was good and I ended up really close to the guys up front. It was an amazing ride. I really enjoyed it. I feel strong physically. I just missed moto one, but step-by-step we will put everything together."

A championship standing of eighth is far from what both Paulin and Yamaha expect. If his fate is not with the Japanese for 2021 it will be fascinating to see where and how his career takes him next and what he can still produce. He’s a rich character for MXGP. Speaking of Frenchmen, countryman Jordi Tixier also broke into the top ten for the first time this term and after some unsettling months with team changes.

TV Commentator Paul Malin stated that Rockstar Energy Husqvarna’s Thomas Kjer Olsen was only the second rider to have posted more than one Grand Prix win at Mantova. The other was Tony Cairoli, with the Italian victorious on four occasions across the Tazio Nuvolari course.

Olsen logged his achievement in the space of three days. The tall Dane brilliantly hunted SM Action Yamaha’s Maxime Renaux and Red Bull KTM’s Tom Vialle in the first moto to give his team a second successive triumph (his teammate Jed Beaton grasped the second race on Sunday) and he worked through the pack to second behind the vanishing Vialle in the second sprint for his 1-2. Olsen’s scorecard was untouchable, even if Vialle came close with his 3-1 and a firm response after his front wheel problem a few days before. F&H Kawasaki’s Roan Van De Moosdijk completed the top three with a 5-3 and at Renaux’s expense after the young Frenchman’s first lap crash forced him to plough all the way back to eighth.

Olsen’s surge has seen him accumulate more points in the last four rounds than all of his previous in 2020, where he was dealing with a wrist and neck injury. He is still 54 points from Renaux and third place in the standings, but is beginning to have a firm input on the results and a say in the title dispute. Speaking of which…

Tom Vialle boosted his championship lead to 46 points after the latest spat with Monster Energy Yamaha’s Jago Geerts. The Belgian was feeling generous in the first moto. He chucked away the lead on the fourth lap and tumbled down to eighth as Vialle gladly inherited third and promised to start better in the second race: cue a holeshot and an escaping KTM. Except that Geerts had other plans too. His rampage from sixth to second set-up a tasty finale against Vialle as the pair headed into the first turn with three laps to go.

Geerts went for the jugular but tumbled onto his own knife when Vialle nullified the threat. The Frenchman would have been aware of the Yamaha coming close on the inside of the turn but was ahead and had the momentum to come across. Geerts had nowhere to go, clipped the KTM’s rear wheel and was again eating sand. Geerts was clearly excited and had closed a three second gap in two laps. As much as Vialle’s move could be construed more towards the ‘dark’ rather than the ‘light’ side of sportsmanship, then Geerts lunge could be interpreted as hasty, he was not close enough to out-brake and was probably hopeful of some physical maneuvering himself to make the lead stick. With the Yamaha again on its side and Geerts down to fifth Vialle was able to profit.

“I closed the gap on Vialle pretty easy,” Geerts said. “I wanted to go for the pass immediately, but we touched and I crashed. No, I wasn't too fierce. It was just bad luck. Again, that's frustrating. I hope luck will be on my side soon. The only positive aspect: my level in the second race. I need to take that speed to the next Grand Prix."

Like he says, Geerts needs to find this level of form and aggression again next weekend. His 46-point gap is not unsurmountable with another 16 motos to go but with every passing lap and Vialle holeshot then his margin for persistent errors gets tighter and tighter.

The Grand Prix of Europe takes place on Sunday.