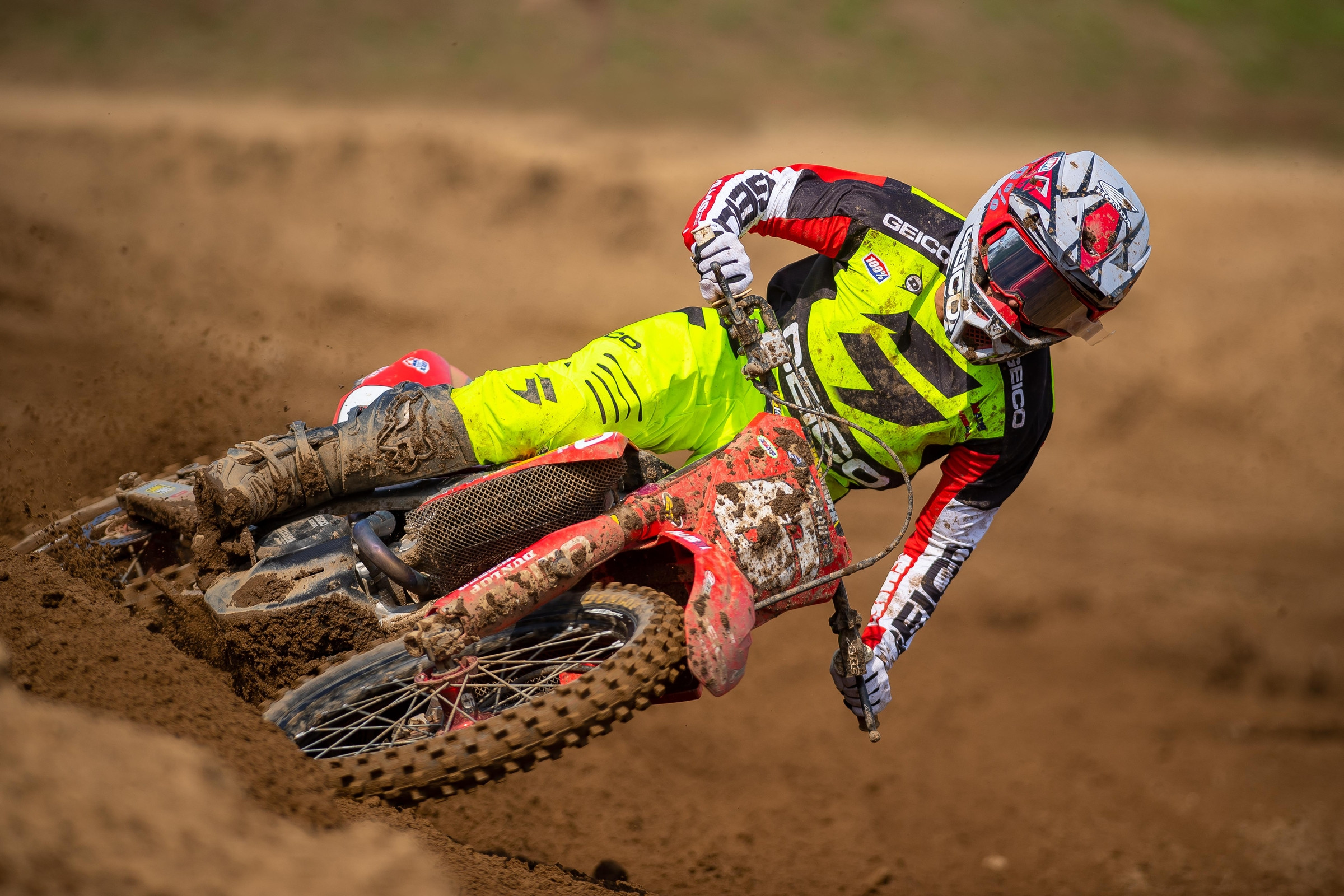 As we move into the second half of the 2020 Lucas Oil AMA Pro Motocross Championship, Zach Osborne and Jeremy Martin lead the points standings in their respective classes. Sitting at the head of the championship table is not always ideal, as the pressure of holding onto the points lead has folded even the best of riders.

However, most champions have taken the reigns of the series near the halfway mark. As the back half of the 2020 season is now right in front of us, we thought it would be fun to look back and see who led at halfway in the past decade and how each championship turned out.

The 250 class championship in 2010 is remembered as much for Trey Canard’s monstrous second half of the championship as it is for Christophe Pourcel’s unfortunate collapse. The Frenchman boasted a 33-point championship lead at the halfway mark only to have a rough few weeks, DNF a moto at Unadilla, and hold a narrow championship lead heading into the final round where he would crash a suffer an injury.

Canard on the other hand won four of the last six overalls on the season while winning seven motos along the way to claim his only national championship of his career. Pourcel’s injury-induced double DNF at the finale also meant that Tyla Rattray claimed second in the championship behind Canard.

In his rookie season in the 450 class, Ryan Dungey started slow at Hangtown and then thoroughly dominated the rest of the season. By halfway, he held a 64-point lead on Chad Reed in the standings before Reed would pull out of the series just a week later with Epstein-Barr virus. Dungey would go on to win the championship by 145 points over Brett Metcalfe who narrowly beat out Andrew Short for second in the standings.

Monster Energy/Pro Circuit Kawasaki, particularly the trio of Wilson, Blake Baggett, and Tyla Rattray, were nearly untouchable in 2011. By halfway, all three were the only riders to win a moto on the season with Wilson leading the points. Wilson oddly had not won an overall though by the halfway point and only had three moto wins to Baggett’s seven. Wilson would eventually win three overalls, including the final four moto wins, and take home the 2011 championship by 56 points over Rattray.

It was the season of “what if” for not only Chad Reed but Ryan Dungey as well. Reed led the points following RedBud and would even win the first moto at the next round at Millville. However, the jump now known as the “Chadapult” sent the Australian flying through the air without his Honda on the first lap of the second moto, and Chad was never the same for the rest of the season.

As for Dungey, a DNF at Freestone when his fuel boiled while leading the race likely cost him his second consecutive outdoor title. Instead, Ryan Villopoto took home his first 450 class title by a mere 12 points.

Blake Baggett was in full “El Chupacabra” mode in 2012 where he seemingly could win the moto from any position in the final 15 minutes of the race. Winning motos from behind week after week was tough sledding, and a stacked field of Eli Tomac, Justin Barcia, Ken Roczen, and Marvin Musquin didn’t make it easy on him. The result was a see-saw battle, and Baggett led home Barcia in the end by just 20 points.

Dungey spent the first four motos of the year watching James Stewart sneak off with the wins before Stewart crashed out of the first moto at Thunder Valley. Stewart wouldn’t win another race that year. Dungey then put together an impressive season, as he finished in the top two in every moto, besides one third-place finish. Dungey won 18 motos, 10 overalls, and took the championship by 127 points over Mike Alessi. This year also marked KTM’s first U.S. Championship in the 450 class.

This titanic battle had been brewing for nearly a decade at this point, as German superstar Ken Roczen and American superstar Eli Tomac fought tooth and nail for the 250 class title. Roczen led by just seven points at the halfway point, but Tomac put together a torrid run of moto wins down the stretch to leapfrog the German and take home the title by 59 points.

Ryan Dungey was keeping Ryan Villopoto honest in the first half of the 2013 season by once again not finishing worst than third in any moto through six rounds. Villopoto was racking up the moto wins but still had a few hiccups and only held a 12-point lead in the championship at halfway. Then in the very first moto of the second half, Dungey took at DNF in moto one at RedBud and left a clear path to the title for Villopoto. RV won the title by 56 points.

Jeremy Martin won the first five motos of 2014 and held a comfortable lead over teammate Cooper Webb by 33 points. The gap would only grow from there as Martin pulled out a 79-point lead over eventual second place man Blake Baggett to claim his first Lucas Oil AMA Pro Motocross Championship.

Roczen looked to make amends for his failed championship run in the 250 class a year prior by taking the title in his rookie 450 class season. The German won six of the first 12 motos and was actually out-consistency-ing the Dunge along the way. In the end, Eli Tomac tried to play spoiler down the stretch (he missed the first races with injury) while Dungey inched closer from his 26-point deficit at halfway to just 14 points by seasons end. Roczen would take the title in what would be his final season with KTM.

Right from the first gate drop in 2015, it became very apparent that the title would come down to a fight between reigning champion Jeremy Martin and two-time MX2 FIM Motocross World Champion Marvin Musquin. By the halfway point, Musquin led Martin by 10 points in the championship, but it would literally flip flop the other direction the very next week, as it seemed to do all year. The duo were separated by just two points going into the final round before a bike malfunction left Musquin with zero chance at the title. It would have been an epic showdown. Martin claimed by just 12 points in the end.

Dungey leading at the halfway point in 2015 doesn’t tell the whole story, as Eli Tomac had actually won the first five motos of the year before a season-ending crash at Thunder Valley. Defending champion Ken Roczen was also ailing from a back injury that left him a shell of his former self for the first few rounds. By the time Roczen got the ball rolling, it was far too late as Dungey cruised to his third 450 class title by 100 points in the end.

Cooper Webb leading at halfway here again doesn’t tell the whole story as he didn’t actually vault to the top of the standings until essentially the exact halfway mark of the season. Joey Savatgy had led the championship up to that point before a disappointing 16th place finish in the second moto at RedBud (due to a crash). Webb won RedBud and took the lead in the championship by 11 points. Webb then put together a great second half, as he pulled out a 73-point lead over teammate Alex Martin by the end, while Savatgy couldn’t replicate his early-season success.

In what was arguably the greatest motocross season outside of the Carmichael/Stewart perfect seasons, Ken Roczen was one broken fork and three Eli Tomac beast modes away from a perfect season. Roczen would have likely been perfect for the first half of the year had his air forks not decompressed while leading the first moto late at Glen Helen. He somehow nursed the bike home for fourth. Later, Tomac caught and passed him twice at Southwick and once at Washougal the rest of the year. Other than that, Roczen put 20 (!) moto wins on the board, three second place finishes, and one fourth for a dominating 86-point championship win.

Riding the coattails of a dramatic championship win in supercross, Zach Osborne kept the train rolling into outdoors as he dominated the opening round of the season and had pulled out a 38-point lead by halfway. Osborne would only get better in the second half as he would eventually take home the title by 81 points over former champion Jeremy Martin.

With Dungey having just retired from the sport and Ken Roczen out with his dramatic arm injury, Eli Tomac was primed and ready for his first 450 class championship in 2017. The first one is never easy as they say and Tomac would have to fend off Blake Baggett and Marvin Musquin at separate points during the season to take home the championship by just 17 points in the end.

This season looked to be a Zach Osborne, Jeremy Martin, and Aaron Plessinger title fight, until Osborne went out with injury at round three. This left Plessinger and Martin trading the points lead, until Martin went down with injuries. Plessinger took hold of the red plate for good by the 12th moto and wouldn’t relinquish it for the rest of the season. He took him the title by 110 points over Alex Martin.

Tomac built up a comfortable lead early in the championship by halfway on the heels of nine moto wins and five overall victories. With a 32-point advantage on Marvin Musquin, the championship appeared to be in hand for the second year in a row. Tomac then DNF’d the very next moto at RedBud and didn’t fair much better in the next moto, handing the championship lead over to Musquin. The two went back and forth a bit down the stretch but Tomac ultimately prevailed by 16 points.

Adam Cianciarulo lost the 2019 250SX West Region Championship in heartbreaking fashion but put it all behind him immediately in Pro Motocross. He won the first four overalls, finished off the podium in a moto just once through six rounds, and opened up a 23-point lead over Justin Cooper by halfway. It wasn’t over, though. Dylan Ferrandis, who had taken the title away from Cianciarulo in supercross, put together a ridiculous second half of the season. His efforts fell short and Cianciarulo won the title by 20 points.

After two championships that were a bit more of a battle to win than he had hoped, Tomac’s 2019 campaign was everything he could have asked for. A 26-point lead on Musquin by the halfway mark would only grow by season’s end as Tomac claimed his third consecutive motocross title by 58 points.