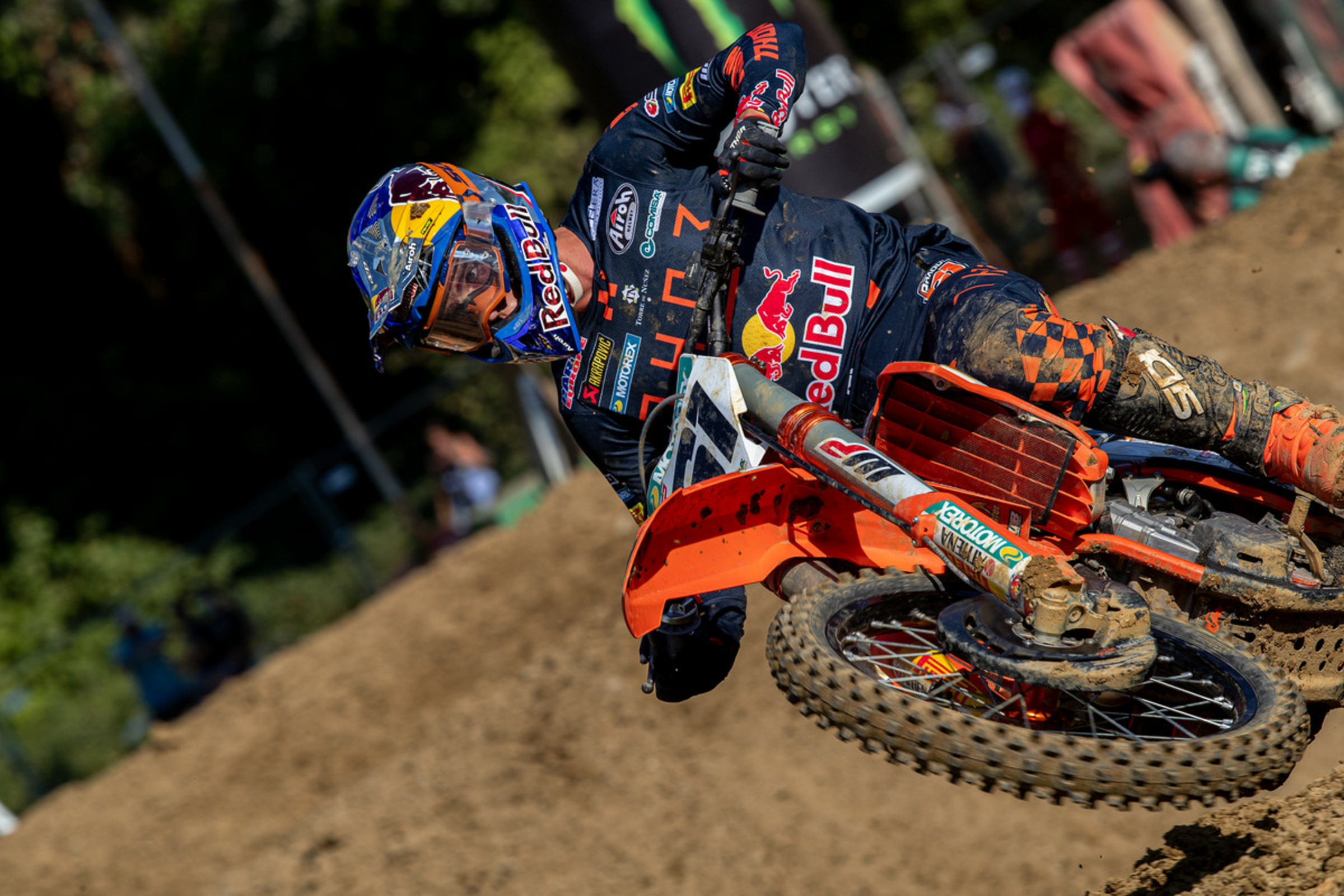 Two races into a three-race MXGP stint at the Faenza circuit in Italy, Red Bull KTM’s Jorge Prado is showing signs of improvement after spending the year fighting back from collarbone and femur injuries. It culminated with his 2-2 scores for the overall win on Wednesday, the first MXGP triumph for the 2018 and 2019 MX2 FIM Motocross World Champion.

Lewis Phillips of MXVice.com caught up to Prado after the GP rounds on Sunday (4-6 for fifth overall) and Wednesday (2-2 for his first overall win).

MX Vice: Great day, and your best day in MXGP by far. Led most of both motos. I don’t even know how many laps you led in total—you led a lot of them. Your speed is clearly there, you just need more bike time and bike fitness and then you’ll be able to carry that speed the entire moto and there you go. I guess that sums it up?
Jorge Prado: Yeah, I think maybe I made a good step. Speed-wise I’m feeling quite good, and also with the bike. After Latvia I could do two solid weeks of riding and everything started to click again a little bit. Today was a good day. It was a good day for me. I’m feeling good. I was leading in the first moto, then Jeffrey [Herlings] passed me and I was clearly second on the last lap. I went into a rut and then a rock fell just in front of me, so it hit my front wheel and I crashed. It was a pity, because it was three corners before the finish. I was clearly second. It was a bit like that, but the riding was good. I led 25 minutes.

I did the same in the second moto. If I know I can be first in both motos for at least 25 minutes, then I just need to work on those last five minutes. We can work on that for Wednesday. Physically I feel quite okay. Like I said, bike-wise I am feeling good. We will see.

If there’s one thing that you want to improve on Wednesday or something you want to change, what would it be?
I think once it comes to 25 minutes and they are close, just keep going. I was thinking sometimes that I had to close the door, and that made it even worse. I just need to keep going and keep going. They are not faster than me.

We saw that!
Yeah, they are not faster than me. They were better than me, so I don’t know. We will stay on two wheels. That’s very important. Keep putting time on my bike and then we’ll be okay. I’m happy that I’m racing. I’m enjoying it, actually.

Rather than that being the bike fitness that you lost through both injuries, do you think it was just more you overthinking about leading your first MXGP race?
In the first moto I had a mistake at 23 minutes, more or less, and then that made Jeffrey come close to me. Once they are close, these guys, they give more than 100 percent to make the pass. Jeffrey did that, then I was behind him. I was really on his wheel the last two laps. I was feeling good physically in the second moto, like I said, but I just messed it up mentally and I lost the focus. That’s why I started making little mistakes. That comes also because I was a bit tired. Today it’s also a training for me, so on Wednesday we will hopefully be a bit better.

Let’s end the interview on a positive note. Today was your best MXGP day by far. Your speed was amazing. I think it’s all good. You have to agree?
One thing I’m impressed is that normally everybody says, “Yeah, but Jorge is good in sand.” Today it’s hard-pack, hard like hell in some places. I’m feeling good. Riding-wise good. Smooth. I didn’t have to risk to be up there, so that’s very positive as well. I already said 100 times in the interview, I’m feeling good. It’s alright. We just need to improve day by day and race by race. Hopefully we can one day stand up on top of the box. That’ll be amazing if we can make it here in Faenza. Not much to say about today, actually. Good day.

MX Vice: We kind of knew you were getting closer and closer to your first win. You finally got it done today with 2-2. You must just be over the moon.
Jorge Prado: Yeah, today is a special day. It was hard as well. I had to really push both motos. It was a pity I made a mistake in both motos that cost me, let’s say, a heat win maybe. I’m super happy, though. I worked very hard for this win. I’m over the moon. It was a perfect day today.

What changed from Sunday to today? Was anything different with you? Honestly, I think the track was a bit better for me on Sunday. Today I could manage to push through that tiredness, keep pushing, and I think I was a bit more focused. I think it was that. Probably more focused and I managed to push really with all I had until the end.

I guess the experience that you got on Sunday helped as well, because you knew exactly what it was like to lead and be attacked on this track. You knew exactly what to expect.
Yeah, I knew what to expect. I knew if I dropped, riders would pass me. I really wanted to win. I was in a position for the win. I said, “It’s today or never.” I couldn’t wait to the next Sunday to maybe get a win, so I really wanted to get it today. It was perfect.

Do you think you rode better in the second race than in the first one? I don’t think many people noticed. After Tim [Gajser] passed you, though, you made a bit of a run at him again and set your fastest lap times. I thought you might have actually got him.
Yeah. I was running very good at one point in the second moto. When I made the mistake on that lap, I was on a fast lap. I was pulling away, then just in the last downhill I could not get traction. I got pushed to the outside and almost crashed, but I somehow saved it and rolled the jump. Tim was there, though. He passed me and then he pulled away a little bit, but like not much. He was there in the front. A couple of laps later I got some very good rhythm and I caught him back. I even attacked him a little bit. I could not make the pass. It was a pity, because I think I was riding a bit faster. It is what it is though—he defends good. I was riding good. I was riding good in the second moto.

Did you learn anything from Tim after he passed you in the second moto? Pick up on any lines? How about with Jeremy [Seewer] in the first race?
Well, in the first race I was quite tight. I was already not riding very comfortably from lap one. In the second moto I was loose, so that was good. I had good lines. Tim had different lines in some places, but maybe his lines worked for him and not for me. I stayed with my lines that I knew were good. I knew where he was a bit faster. In some places I was faster. It was like elastic. In some places he goes, then I’m back. A little bit like that in the beginning, but finally I could be second and good for the overall.

We are at round two at Faenza. How are you feeling? We have had two really hot days.
I really didn’t feel it. I did not even think about the heat. I don’t know how many degrees it was.

Just how good is it to get the first one in the books and out of the way? Now you can push forward and, hey, maybe get another one.
Hopefully we can get another one and maybe a race win. That would be awesome. Let’s race! Let’s do some training this week and have a good ride on Sunday.