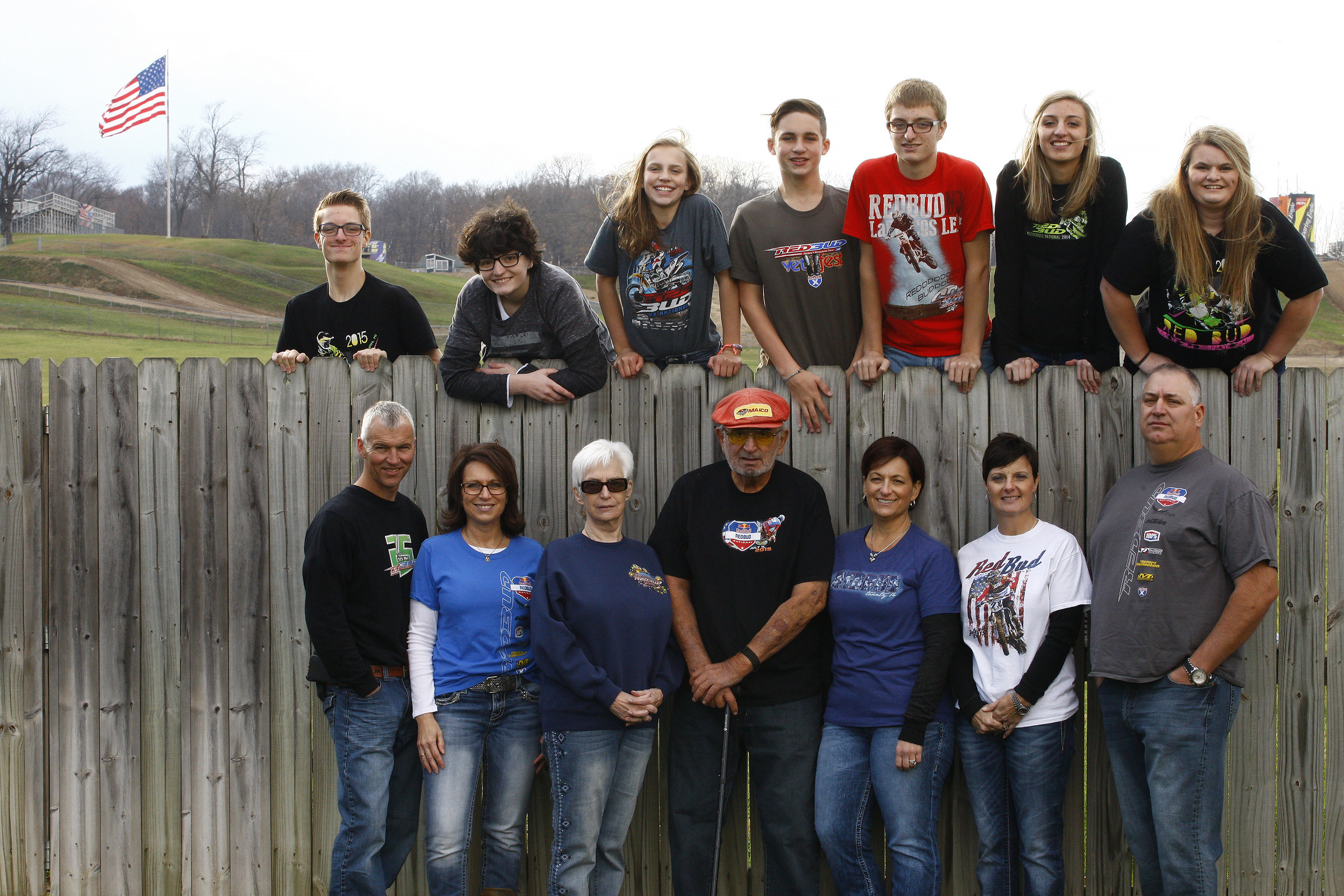 It’s been a crazy year, and it just got weirder with the Washougal National now going off of the Lucas Oil AMA Pro Motocross Championship schedule and Loretta Lynn’s, which wasn’t even on the 2020 schedule when the year began, now hosting its second-straight race.

Perhaps all that change has led people to worry about other races. We were hearing rumors than the RedBud National might not happen. Apparently, the folks at RedBud have heard this, too, but they don’t know why! The double header (Friday and Monday) National over Labor Day Weekend is still happening. To double check, we talked to Amy Ritchie, who runs RedBud along with her brother Tim.

Racer X: Hi Amy. So, we don’t have four hours to get into this all, but I can’t imagine how difficult it has been trying to get this going this year. From March through now, it must be crazy.
Amy Ritchie: Totally crazy. We went from thinking it would be over by July, to, uh oh, it might not be over by July, to, no way we’re ever having a national at all, to “Wait, you want us to have a national in September?” Then, “You want us to have two?” But we can’t have fans, we can only have racers.

Yes. We have heard the event will be for amateur and pro racers only—no spectators—but now I’ve heard these rumors the event might not happen at all, anyway. Washougal is no longer on the schedule. Is your event still happening? Any changes?
Absolutely no changes. We speak with the county weekly and the police department weekly, and there’s nothing happening or changing on our end, besides us planning an event.

Okay, good news. So, can you explain how this rider-only event will work?
Okay, just to give a few details, campgrounds are open in Michigan, you can have up to eight people in your campsite, and there are no restrictions. So, that’s happening. But, if you’re planning an event, you can’t have spectators. So, we are having a participation-driven event. If you register for an amateur event, and there are three days to choose from, if you register, we send you a code, you can buy a campsite if you want to camp, and up to eight tickets. If you don’t want to camp, that’s okay, but you do have to participate as a racer to get tickets. Now, we have had people ask us if they’re allowed to leave their campsite when the pro races and going so they can watch. Absolutely, you’re allowed to walk around and watch.

That’s the only way to get tickets? You can’t just drive up to the race and watch?
Correct. You have to buy things in advance.

And you have to be connected to a racer? You can’t just buy a ticket in advance?
Right. Racing is a bit unpredictable, you never know if someone that said they would come with you decided not to come, or maybe someone decides to come with you at the last second. We send you a one-time use code with that, so if your group changes we will try to work with you at the track if you need to change something in your group. If you come in and you don’t have anyone in the group that has set up anything in advance, you’re not getting in. If you’re with a racer who  has pre entered, and maybe that racer bought six tickets, and you need to get one more, that’s okay, because the limit is eight. But, you have to pre-enter first to start the process.

What’s the racing schedule?
We have a Thursday practice day, then amateur racing on Saturday and Sunday, with the pro races on Friday and Monday. We’re running the full pro track for all the amateur races.

No night track down the hill?
No, that track is pretty much made to gather around and watch together, and that’s not what we’re supposed to be doing here! [Laughs] That’s not going to work.

So how long has this been the plan? Racing only, no spectators?
It actually hasn’t been all that long, maybe three or four weeks. But since then, nothing has changed, and everything scheduled to happen is still scheduled to happen. Basically, here’s a way you can understand what you will see if you’ve been here before. There’s no lot B, there’s no big line of cars coming in to watch the pro races. It’s just people camping here, and some additional parking for people who are local or who are staying in hotels and just need to park for the day.

Is there an actual cap on the amount of people, like, you can only have so many racers?
I don’t anticipate that. We’re already doing a one-moto format, so if we get more than 40 in a class we will just split that class into two separate divisions. We think everyone that wants to ride will get to ride.

So if there are any rumors out there that you don’t have the proper permitting or permission, so far so good, you’re okay.
I don’t know where the rumors came from, but they’re unfounded. I think everyone is just nervous. There’s a lot of uncertainty this year, everyone can see what happened to Washougal. But being cancelled is news to us. There’s nothing happening here as far as getting shut down. All we’re doing is planning to run an event!

Didn’t you tell me you heard the same rumor for your ATV MX National?
Yes! We heard the same thing for a month leading up to that race. People would call, “We heard you’re cancelled!” There was never a problem. We had the race. I don’t know where these things start, but I guess if anything gets cancelled anywhere, people start worrying and wondering.

It doesn’t help that, on the outside, everyone has heard Michigan is one of the tougher states to work in.
It is.

So, you’re still on, but this has been very tough.
Oh it has. They’re having a NASCAR race in Michigan, or actually, they had it, but with no fans. As I pointed out to our county, a NASCAR race with no fans still might have more people than we do if we’re just holding amateur and pro races. Just the amount of people. NASCAR teams have a lot of staff. We have 250 acres. I don’t think with amateur racers, even with them buying eight tickets, I don’t think we’ll have a problem with it being too crowded.

We saw some changes to the traditional podium at Loretta’s this weekend. I’ve heard the RedBud podium in the center of the track is going to be moved?
Correct, the podium will now be somewhere buried in the pro pits. You probably know this, but I’m told they’re doing the TV interviews over the PA. So that’s the point, fans don’t need to go over there, you don’t have extra people around the podium, there are no pit passes, we’re not doing anything that will make people gather together. We’re trying to respect all the restrictions. We’re not making masks mandatory, expect on the starting line with your mechanic. Our staff and track guys will be wearing them, but we don’t mandate that besides the staging, starting line, and mechanic’s area.

The double header. How did that come to be?
I know part of it. They really needed an eight-round series to make the championship legit, I’m not sure how you define legit, weather it is sponsors or teams or points of whatever. So they scheduled nine just in case something happens and they lose an event. It wasn’t our idea, they came to us. And then it’s Labor Day Weekend, so maybe that made more sense.

Do you have dreams in the middle of the night of what it would be like to have a big July 4th event with fans again?
[Sigh] Yeah, it’s a fading memory at this point. It’s been a long time. It’s been an odd year! But the amateur races have been awesome. I’m sure everyone has heard you can’t even buy a new dirt bike right now, everything is sold out. That’s a nice shot in the arm for our sport. But, there’s a big difference between a big amateur race and a pro national! I might forget how to do it by next July! Hope not!

Anything else you want to mention?
Well, it’s going to be similar to a regular national weekend. We’re opening on Wednesday night like we always do, and we will have Thursday practice like we always do, but instead of a Friday amateur race you’re getting a Friday pro national. Then you throw in the extra Monday national. We made it a pretty good deal, it’s $125 dollars for everything, Wednesday through Monday for the ticket, and it gets cheaper if you take days off and don’t stay the whole time. We tried to make the whole package affordable. And, yes, you don’t have to stay in your campground during the pro races, you can come over and watch. We won’t have grandstands and bleachers, and we won’t have the  big screens. Back in the old days, fans would run from one side of the hill to the other to watch the race. We wonder if that’s going to happen again! We certainly have the room for it. I also want to mention our presenting sponsors for the pro races. The Friday race is presented by the Intense Tazer MX, and Monday race is presented by the Road 2 Recovery. We’re not asking Road 2 Recovery for money, we’re just helping them get the word out. It’s been a tough year for everyone but riders and racers are still out there and need help!