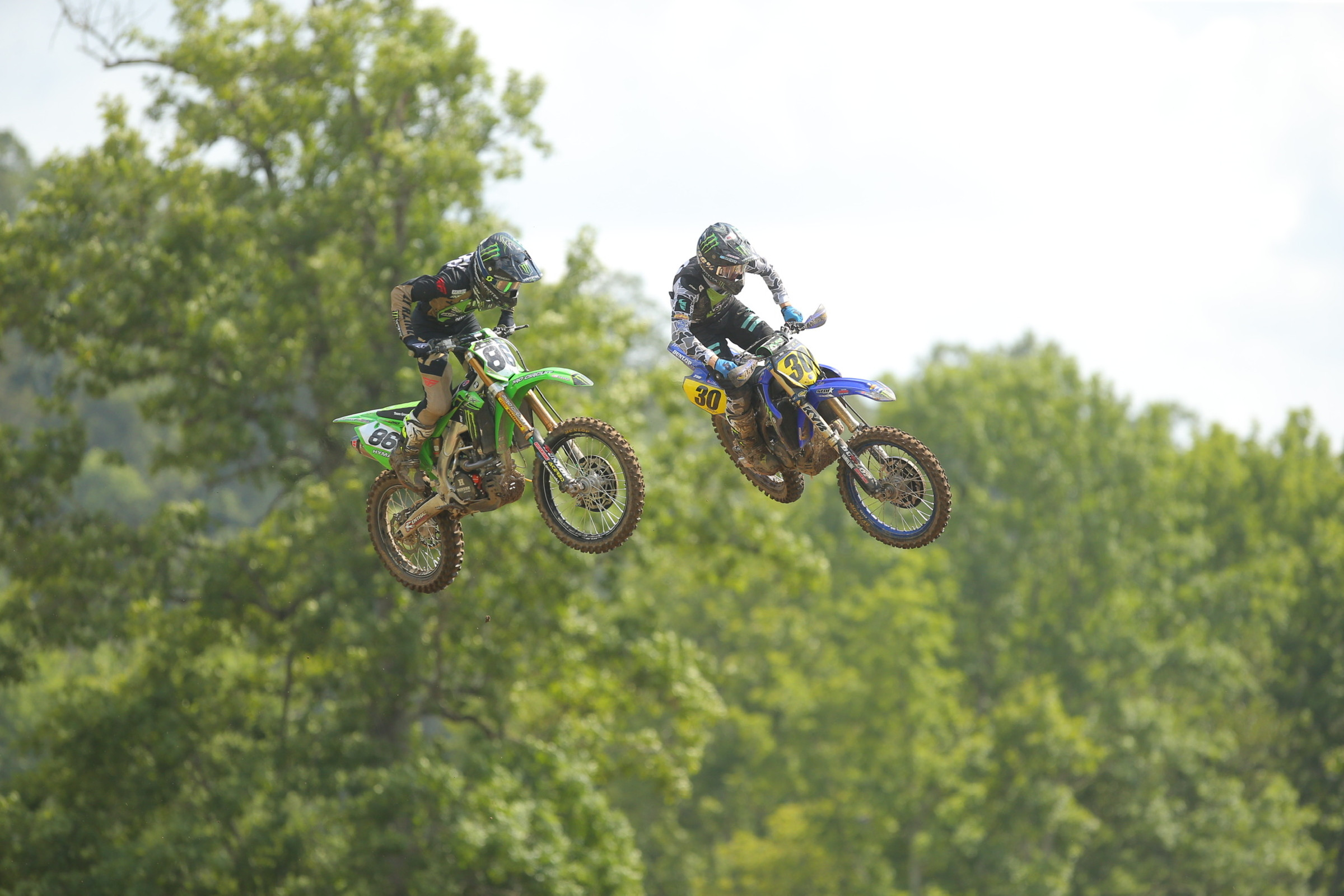 Things We Learned at the Ranch Tuesday

With the 2020 Monster Energy AMA Amateur National Motocross Championship at Loretta Lynn's underway, we’re going to provide you a written recap highlight the best action from each day’s motos. Here’s what we learned on Tuesday’s first day of racing at the Ranch.

After last year’s loaded A-class graduated so much talent—Jett Lawrence, Jalek Swoll, Jo Shimoda, Carson Mumford—many insiders feel the 250 B class, and a similar lineup in Schoolboy 2, pack the most in 2020. The man who fired first was Monster Energy/Star Racing Yamaha’s Matt LeBlanc, who won the first 250 B showdown in a race filled with talent like Chance Hymas (Kawasaki), Jett Reynolds (Kawasaki), Nate Thrasher (KTM), Jack Chambers (KTM), and Nick Romano (Yamaha).

You can tell this group of riders are matched closely on speed, because they spent most of the moto shadowing each other’s lap times. Hymas grabbed the holeshot and led the first six laps as LeBlanc sat close behind in second. Thrasher and Romano went back and forth for third place. Reynolds came from ninth on the first lap to fifth. The top five riders were all running equal lap times so no one was able to gain any time.

Thrasher made a slight mistake and Romano capitalized to snag third. Just as Romano passed Thrasher, LeBlanc caught up to Hymas and then took over the lead. Hymas swapped positions with LeBlanc about three sections in a row before LeBlanc’s pass finally stuck.

“It felt pretty good,” said LeBlanc on the win. “I felt strong all the way through. Everyone started to fade at about the halfway mark and I just tried to hammer through it. Got me a little gap and settled in. I’ve worked really hard for this and came out here to show it.”

“I’m glad to be up on the box and still in title contention,” said Hymas, who took second, “but not the way I wanted to end the moto, obviously I want to get the gold, but hey, I’ll settle for second.”

In the battle for third, disaster struck for Romano and Thrasher on the last lap. We believe Romano hit into a lapper and crashed and then Thrasher had nowhere to go and got caught up in it. Thrasher officially finished ninth and Romano finished 12th, which ruins their title hopes. Jett Reynolds, who seemed headed to a fifth, inherited third.

Reynolds is making his return to the ranch after missing the last two AMA Amateur National Motocross Championship events at the Loretta Lynn Ranch due to injuries.

“I gave it my all on the first four laps…I got the last gate pick so I was literally the last gate on the outside,” Reynolds said. “To come out with a third, I did get a little bit of luck but, hey, I’m gonna take it: I haven’t been here in a few years, this place is gnarly, I’m riding a bike big now so it’s a lot harder and I’m up for the challenge. That was a good starting base moto. I got a little tight out there so hopefully next time I go out It will be a little better.”

Cookin’ in the Kitchen

Looking for the early breakthrough of the week? It’s Yamaha rider Levi Kitchen in a separate division of the B ranks. In the first 250 B Limited moto, Daxton Bennick—only 14 years old on his first year aboard a big bike—stole the lead and threated to run away from the pack. But then some heat started coming from the (wait for it…wait for it) Kitchen. He was 12th by the end of the first lap, but was putting down laps in the 1:51-1:53 laps where Bennick and second-place Jack Chambers were putting in 1:56-1:57s. Dragging pegs, laying the bike down low in the turns, and doing a fast 3-3-2 in the Ten Commandments, Kitchen was on a mission. By the end of the second lap, Kitchen was fourth, by the next lap he was into second, and on lap five he ran down Bennick. When the checkered flag flew, Kitchen took the race win by 37.729 seconds!

“Yeah that was a good race, I got out to a pretty bad start,” Kitchen said. “I don’t know where I was on the first lap, I was pretty buried I think.”

An impressive ride by the youngster, Bennick said he tightened up near the end of the race.

“I got out to a really good start and just started hitting my marks,” Bennick said on the podium afterwards. “Found a pretty good flow and was feeling good out front, comfortable. About 15 minutes in my arms started getting really tight. But I’m happy with my ride, it was good…first national on the big bike.”

We’ll see if Kitchen can repeat this heroic ride again later in the week. (hint: He won another moto by 39 seconds on Wednesday morning!)

Now onto the A classes, which kicked off with a 250 Pro Sport moto. Could the top graduate this year be a Suzuki rider? Bar X Suzuki’s Dilan Schwartz lit it up here, overtaking early leader Mason Gonzales, on a Yamaha, to snag a solid moto win. Rockstar Energy Husqvarna’s Stilez Robertson was able to take the measure of Gonzales for second, but Schwartz had a pace no one could match.

The age classes provided the best racing on Tuesday, including an unreal 25+ battle, with Robby Marshall leading for a while, and then Jesse Wentland and Brandon Scharer dueling to the end. These guys were quadding out of the Ten Commandments section, and Wentland took the win by half of a second. It was pretty much side-by-side across the finish!

The 50+ class was almost as close. Kevin Walker, the all-time leader in AMA Amateur National Motocross Championships here, has made his return to Loretta’s, and he and Barry Carsten passed each other over and over through the first moto. Walker had a lead until he tipped over just before the white flag came out, and Carsten and Mike Treadwell sailed by to take the top two spots. Walker, who cried on the podium in his return, took third, so this championship is going to be tight throughout the week.

On the other hand, the 40+ class had a shakeup with Mike Brown, who has dominated the last few years, ending up not competing this year (we hear that Brown, who helps as trainer as part of the Aldon Baker program, wasn’t sure if he would have time to race amongst his training duties). Now the door is open for…Racer X’s own Kris Keefer! Keefer dominated the first 40+ moto. We’ll see if he can keep it going.

Way down in the younger classes, the favorites kept building their names. Haiden Deegan continues to roll, with a pair of moto wins in the Mini Sr. divisions. Ryder Difrancesco won his first Supermini moto fairy easily, and Max Vohland won Schoolboy 1 (125) on Tuesday and followed it with another win Wednesday morning in the 125 (12-17) B/C class.

In the heart of the 85cc order, Kawasaki Team Green’s Drew Adams and KTM’s Luke Fauser were set to battle in 85 (10-12), as both exchanged the lead with mistakes followed by fast laps. Fauser won it, while Adams at one point fell from the lead back to fifth. He recovered for third, but was none-to-happy having thrown away the lead. This should be a competitive class all week long.

In the Women’s class, Hannah Hodges (Husqvarna) jumped out front at the start of the race but was challenged and passed by Jordan Jarvis (Kawasaki) as Taylor Allred (KTM), Jamie Astudillo (KTM), WXC GNCC racer Tayla Jones (Husqvarna), and Katie Benson (Yamaha) were not far behind. Jones, the off-road racer, looked quick on the moto track and was challenging Astudillo for fourth, but the Australian had a mistake and got her bike stuck on the inside of a turn. It took Jones a little while to get unstuck and she came remounted in tenth. She would finish sixth.

Jarvis continued to lead, and Allred put the heat on Hodges for second, but then she grabbed too much throttle in a corner before the Ten Commandments and lost the back end. Allred was able to close the gap back up on Hodges but was never able to make a pass. Jarvis took the win (with a 19.102-second gap) as Hodges and Allred finished second and third, respectively.

“That moto was definitely good but I definitely have more in store for the next motos,” Jarvis said on the podium. “I’m just so excited to be up here, last year was a rough year and I’m very excited to get this year started on a good note.”

Hodges was able to fend off all Allred threw at her but she was just off Jarvis’ pace out front.

“We’re going to make some adjustments,” Hodges said afterwards. “First moto, second is not bad, you can still for sure get a title out of that so we’re going to go back and put our heads down and get it done.”

To view the results from all classes from the 2020 Monster Energy AMA Amateur National Motocross Championship, visit resultsmx.com/lorettas.