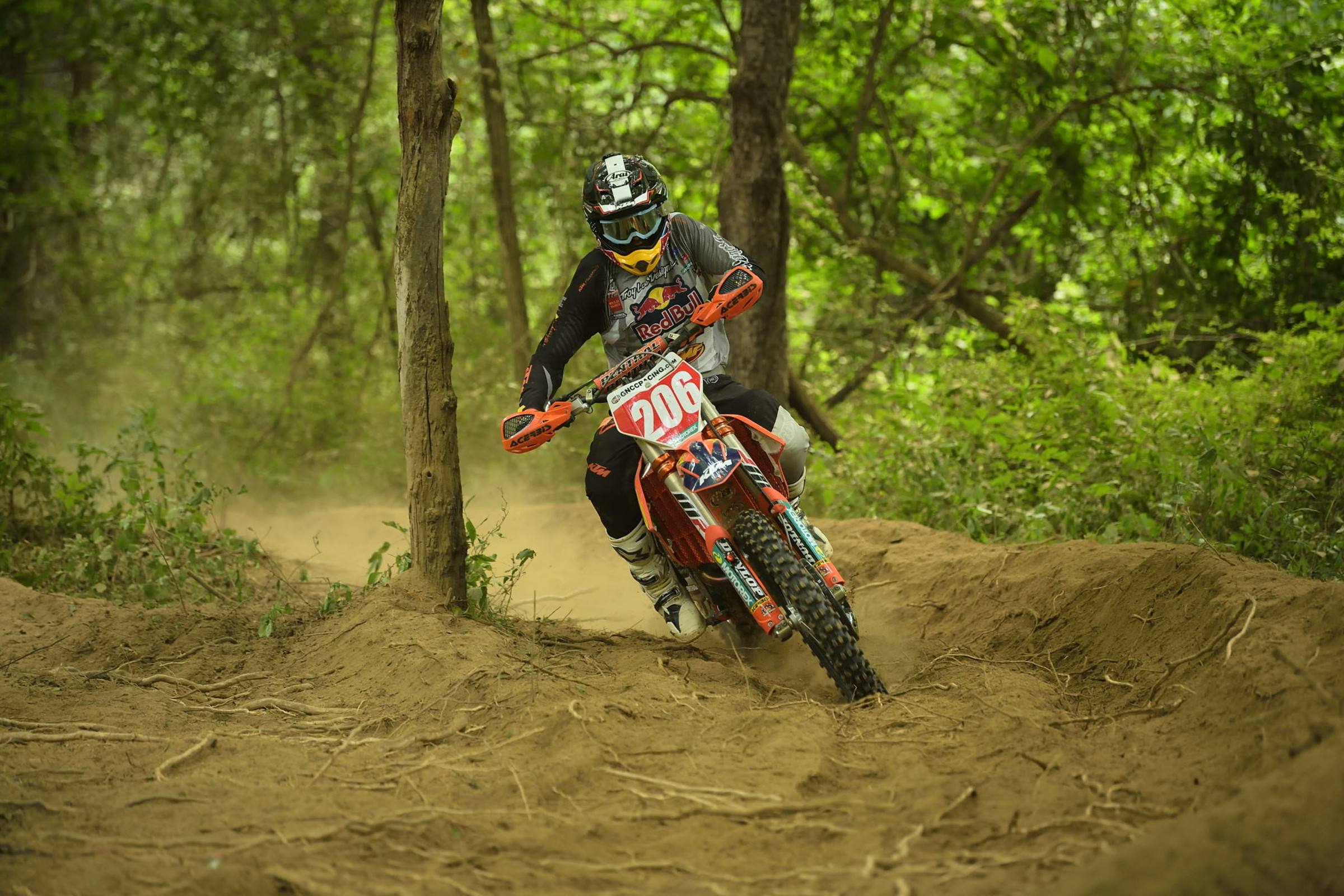 GNCC Report 5 Things We Learned at the High Voltage GNCC

Round eight of the 2020 GNCC Racing season would see the series head to Maidsville, West Virginia, for the High Voltage GNCC. And what a fitting name it would be as this round produced some of the wildest, dustiest conditions of the season, coupled with what would become a bit of a controversial finish. This event also served as the final round before the series heads into its summer break, an eight-week break before the series picks back up in September. Here’s what we learned.

It Was Dusty… Really, Really Dusty

With dry conditions for several weeks leading up to the event, and only a small amount of rainfall on Friday evening, the course was left incredibly dry and dusty. After Saturday’s ATV race dug through the top layer of dirt, as well as the Youth and 10 a.m. amateur race, Sunday’s 1 p.m. bike racers were left with deep silt and thick dust.

It was so dusty that there were reports you could hear it singing “Son of a Preacher Man” … I made that joke while giving the track description at the start of the 10 a.m. race and I think maybe there were three people who got it and laughed. In all seriousness, some areas down in the woods did have some hard-packed areas with a little moisture in the soil but the majority of the track was filled with loose, silty dirt. This also made for a rough and choppy racecourse as it exposed a lot of roots and made the acceleration bumps larger.

The Finish Was Wild

Russell’s bike began smoking during that final lap. He was then given a pit board saying “save the bike” which would force him to adjust his riding style. To add to the issue, Kailub also had a small tip over that would break his shifter. So now he’s nursing the bike, attempting to stay low in the RPM range, but he can’t shift.

This would allow Toth to catch back up and make the pass for the lead. This is the point where things get even crazier. Within the last mile leading up to the finish, Toth would end up behind a lapped rider and with Russell keeping his bike low in the RPMs; Toth likely didn’t realize Russell had caught back up to him. This allowed Russell to sneak by for the pass in the final sections leading up to the finish and take the race win.

The late race pass with Russell on a ailing motorcycle left many fans scratching their heads, but these types of races are always a little on the odd side and always seem to produce some sort of finish that leaves people wondering what just happened at the end of the day.

The XC1 class still saw a good bit of action outside of the battle for the win. Josh Strang spent most of the race just out of the lingering dust behind that lead duo and would end the day in third place continuing his streak of landing on the podium at each event so far in 2020. Ben Kelley caught Strang at times but couldn’t make it happen in the dust, so he took fourth place spot just ahead of Jordan Ashburn.

Then there was Cory Buttrick. Buttrick was once a rising star in the GNCC world that even claimed an overall win during his rookie XC1 season in 2010, as well as a number of podium finishes. Unfortunately, a string of injuries has hampered Cory’s career for several seasons, and while Cory hasn’t been a consistent competitor the past few seasons, he made it out for the High Voltage GNCC to take a solid sixth place in the XC1 class (14th overall).

The big story leading into the event was the announcement that Zach Osborne would be lining up to contest the XC1 class at High Voltage. Zacho is no stranger to GNCC as he landed several XC2 podium finishes back in 2013, and also landed in the top 10 overall at those events. Some expected this type of performance out of Zach once again, and others expected him to just go out and have a good time racing his motorcycle. Zach did decent, finishing the race seventh in the XC1 class (29th overall).

While he definitely wanted to finish a little higher, this was a tough race. The dry conditions and deep silt were a bit difficult to navigate, and it was likely even more difficult for Zach, who tends to have a little more a sit-down riding style. He was also dead last off the starting line and the course went straight into a tight woods section, leaving him unable to pace off of the top riders. Regardless, it was really cool to see Zach come out and try his hand at the race and maybe this will lead some other top motocross stars to think about doing the same.

“Yeah it was literally like start, two chicanes, and then tight woods,” Osborne told our Jason Weigandt after the race. “But I knew that. I knew I needed someone to set my pace, because I didn’t know how to do it on my own. So, I had to follow someone and that would be my only chance at a decent result. So, for me, I was in trouble from the drop of the flag.”

It would be good to see Zach take another crack at it someday soon.

“If anything, I want some redemption!” he added. “Not that I had huge expectations, but I’ve been in the top ten overall in GNCC many times before so that was a realistic goal.”

Also, I have to give credit to Andrew Delong. Poor Andrew has been through a terrible streak of bad luck with freak mechanical issues. He’s also been running just on the cusp of podium contention when some of these issues have come up as well. Andrew had a wild day having suffered brake issues early, a few odd crashes, then eventually a motor issue that resulted in him being towed in on the last lap. Hopefully, the final rounds of the season go much better for Delong.

The XC2 class has been incredibly intense throughout the 2020 season with three riders exchanging race wins and a number of others contending for podium finishes. Johnny Girroir would end up claiming the XC2 class win this time, his third win of the season. Craig Delong would end up second while Mike Witkowski would round out the podium in third. Witkowski later said on Instagram he popped his shoulder out during the race but still grinded through for third! Every point matters, because these are the guys who are in a three-way battle for the XC2 class championship.

Delong holds a nine-point lead in the XC2 class as the series heads into summer break with Girroir second and Witkowski in third, just three points behind Girroir. This three-way battle for the championship is closest and most intense championship battle the XC2 class has seen in a number of years, and possibly since the addition of the class in 2007.

While these guys are battling for the title, there are a number of other riders who are looking to play spoiler and find their way into podium contention as well. Thorn Devlin is a newcomer to full-time GNCC competition but has started strong several times this season and been a consistent top 10 finisher in the XC2 class. High Voltage was his best ride thus far, ending the day with a fourth place XC2 finish. We may see him well within podium contention when the series returns.

Rounding out the top five in XC2 was Honda’s Jonathan Johnson. Jonathan has been through a bit of an up and down 2020 season, but now that he’s found his way into the top five, the confidence boost could be a huge help moving forward. Johnson landed on the XC2 podium at the end of 2019 in his first ride aboard the Honda that he’s now racing full-time. With podium experience, he’s another rider who very well may become a consistent threat to the podium as the season winds down.

As mentioned, the series now heads into its summer break. In a traditional GNCC schedule, the series would host the Snowshoe event in late June and head into summer break afterwards. With the current COVID-19 situation, the series was pushed into July and Snowshoe was moved to the fall. While the break may not be quite as long as normal, it still can be a much-needed break for many riders.

Mentally, the next eight weeks leave a lot for GNCC racers to think about. Championships are on the line, and even if you’re out of contention you still want to make a statement in the final rounds. The schedule for the fall is a bit non-traditional as well. The series will return in September with The Mountaineer, which is a tough, rocky, technical event, and then comes Snowshoe. The first two back will be two of the most difficult events of the season, which leaves them the potential to be the most exciting as well.